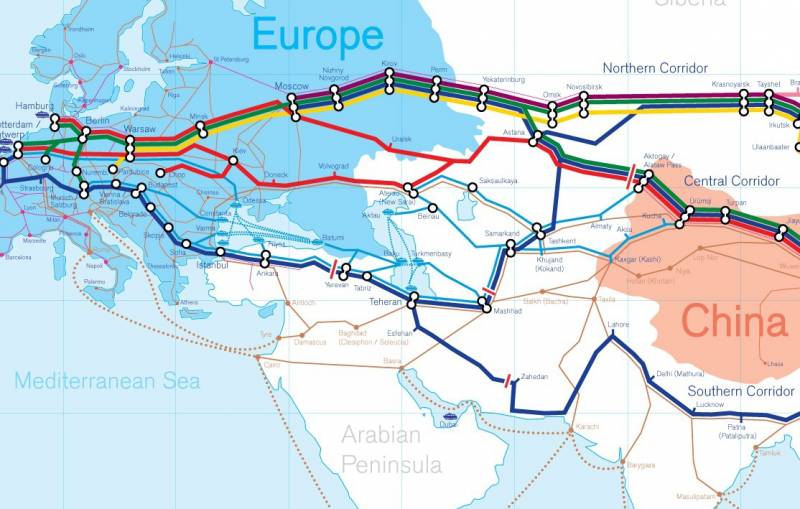 The strategic "friends and partners" did not have time to move away from the shock associated with the failure of the idea of ​​transport trade corridors bypassing Russia, as the West catches up with another disappointment. In the near future, huge cargo flows through the territory of our country will go not only from east to west, but also from south to north, as well as along the new Northern Sea Route.

For the first time since the collapse of the 90, modernization of strategically important transport arteries began in Russia in the 2002 year. Since then, Transsib has acquired full electrification of the main line, reconstruction of seven key Khingan tunnels, a fiber-optic high-speed cable along the entire length of the path, and by 2015, full tunnels - doublers to expand its capacity. Along the Trans-Siberian Railway, the railway track was updated, old installation errors were leveled, dangerous sections were fixed, and problem areas were eliminated. In 2009, the reconstruction of the Amur Bridge and, later, the Amur Tunnel was completed. Created a lot of new hauls, sidings, septic tanks and sidings. The number of trains capable of simultaneously being on the way, as well as the maximum allowable speed of their movement, has dramatically increased.

In 2013, the second link of Transsib with the Chinese railway network was put into operation. At the same time, according to RZD estimates, the throughput capacity of the Trans-Siberian railway increased to 120 mln. Tons. Is it a lot or a little? Of course, a lot. Suffice it to say that this is more than 10% of the carrying capacity of the main global maritime artery - the Suez Canal.

BAM has evolved somewhat less rapidly. By 2013, the line had a capacity of 16 million tons and now continues its modernization development. The reason for this state of affairs is the priority of the state task. The expansion of the Trans-Siberian Railway was necessary for our country to redirect global transit flows to its own territory, while the modernization of BAM, a more protected and new artery, was required by the state for the development of domestic transport infrastructure, civilian targets and military needs.

As a result, by the implementation of current plans, by 2020, the total traffic volume of both routes will have to grow by more than 40% and, according to Russian Railways, be more than 272 mln. Tons.

If the development of Transsib and BAM is a national project of a transport corridor between the East and the West, the concept of development of seaports in the Caspian basin, approved a few days ago, has become a transit strategy from north to south. Formally, its common task is to strengthen the economic and geopolitical presence of our country in the Caspian Sea. However, in reality, the main goal is to “lure” the export routes of the southern world economies: Iran, India and the Persian Gulf states onto the Russian transit network.

The framework agreement for this project was signed by Russia, India and Iran back in the 2000 year, and later, in 2002, all the states included in the project ratified it. Most of the further period, "North - South" was in limbo. The West strenuously created numerous problems on its way. GUAM as a belt from unfriendly states (Georgia, Ukraine, Azerbaijan and Moldova) and at all forced India to say goodbye to the project for a while. Only after the 2008 events of the year, as well as China’s decision in principle to start building its own Silk Road, the situation changed radically, and Delhi dramatically stepped up its participation, and Russia, after forcing Georgia to peace and actual destruction, GUAM restored railway communication with Kazakhstan - Uzbekistan - Turkmenistan and Iran. And since 2009, all the other project participants have begun the implementation of the Indian-Russian corridor.

The eastern part of the route (through Kazakhstan and Turkmenistan) was completed in 2014. The construction of the western part rested on Iran and the undeveloped railway infrastructure of Azerbaijan. Difficult terrain, mass of tunnels, networks that have not been updated since Soviet times — all this has delayed implementation. But despite this, by February 2017, the Russian Railways and the Azerbaijani railways still closed the last contour of the western corridor and began to organize the direct transport “India-Iran-Azerbaijan-Russia” and back.

Thus, North-South is being implemented at a good pace, routes are reasonably diversified to bypass potentially volatile former Soviet republics, traffic capacity is growing, and the project itself is developing quietly and without unnecessary noise. All the ways of the new route somehow pass through Russian territory. And the railways of our country occupy in it from 33% to 53% of the total length.

The monopoly of Transsib as a transcontinental transit route has always wanted to destroy many of our “friends and partners”. The TRACECA project, for example, which assumed the movement of goods through western China, Kazakhstan, Uzbekistan, Turkmenistan and then by sea through the Caspian Sea, the South Caucasus and Turkey, was cherished even in Celestial. However, in order to deliver cargo from China along this corridor, Beijing had to use the ferry: Kazakhstan - Azerbaijan. Then, to get to Turkey, a ferry from Georgia was required, and all the way I would have to withstand four container transshipments, four customs borders, as well as almost constant unloading and loading of cars, taking into account the different permissible weights of various railways.

The Chinese tried to bypass the Caspian through Turkmenistan and Iran, but in fact this made little difference. There are no good railways, single-tracks are laid at the entrance to Eastern Turkey, followed by mountains, lakes and ferries again in the plural. For this reason, the “New Silk Road”, which runs completely bypassing Russia, is inconvenient and unprofitable for China. And all the talk about him, as a rule, is limited to traditional anti-Russian propaganda and liberal media that love loud headlines.

Nevertheless, it should be noted that the main route of the Silk Road runs through Kazakhstan and the European part of Russia, bypassing the Far East and the north of the country. The reason for this lies in the fact that the western territories of the PRC are extremely lagging behind in their development from the eastern ones, and if all goods for export will come from Eastern China directly to Transsib, the western regions of the country will be left out of their potential development. In this regard, the People's Republic of China initially planned to diversify its supplies in several available areas. Part of the cargo must go through the Russian Trans-Siberian trunk along its entire length, part through Central Asia, while the main overland flow will go through all of internal China from east to west, to Kazakhstan, the European part of Russia and further to the EU. From the very beginning, the Silk Road could not pass through the entire country from the Far East.

The Russian route is beneficial to China by the fact that, unlike the Caspian areas, cargo moving from China only twice crosses the customs border (from China to the EEU and from the EEU to the EU), otherwise they follow without any additional transshipments , unloading and other encumbrances. This is also beneficial from a financial point of view, since the logistics infrastructure of Kazakhstan, both rail and road, initially had access to Russia, while the modern infrastructure is only being built along this path. Thus, in terms of the totality of parameters, our country has been and remains the main land corridor from Asia to Europe, and being modernized every day.

The ports of the Far East and the eastern Trans-Siberian Railway will also not remain unused. In addition to partial Chinese exports, Japanese and Korean suppliers actively rely on their infrastructure. This means that losses in this direction are not expected in the near future.

Another aspect of the key project for Russia “One Belt - One Way” is the arctic route for goods. In July, 2017, the meeting of PRC Chairman Xi Jinping and Russian Prime Minister Dmitry Medvedev reaffirmed that Moscow and Beijing strictly intend to lay the sea Silk Road together. Three active routes in the Arctic: the northeast, northwest and the north-north are not equally suitable for this, and therefore Russia and the PRC intend to use only the north-east direction. Firstly, it reduces the delivery time and minimizes the number of icebreakers involved.

Secondly, it is this route that almost completely runs in the Russian Arctic zone. And thirdly, it is here that there is the greatest lack of port and logistics infrastructure that Russia desires to improve and develop. The north-western route is ice-bound, the north-north route passes through the North Pole, and the north-east route almost completely belongs to our country.

90% of China's goods are shipped to the West by sea, so the Northern Sea Route opens up enormous financial prospects for it. Russia, for its part, receives from the project the development of an enormous scale and potential of the internal region, large transit duties, diversification of the economy and political levers in the form of a global artery that can replace even the Suez Canal in the future. It is no accident that our country openly declares that it is ready to grant the right to use the route to other states and companies, striving with all its might to increase the volume of transported cargo, as well as to use the largest Russian icebreaker in the world fleet.

In 2017, at the stocks of Russian shipyards at the same time, there were 11 new icebreakers of various types. Yamal LNG, being actively built in the far North, was also not built as a simple LNG terminal. Thanks to him, in the near future, in the middle of the Northern Sea Route, a full-fledged year-round sea port will appear with ship repair and search and rescue services, with an airport and railway line, with self-sustainability, security, and many, many others. All this will significantly reduce the risks and, consequently, increase the attractiveness for commercial carriers, the icebreaker fleet and the Northern Sea Route.

Today, goods from China are shipped to Europe via the Suez Canal, the length of this route is 22 224 kilometers. The Northern Sea Route, however, requires only 12 964 kilometers to be covered. So, the huge investments of China and Russia, the melting of glaciers and the overload of the Suez Canal give every reason to believe that the Arctic route has every chance of becoming the central link of the “New Silk Road” in the near future, and Russia, in turn, modernized Transsib, BAM, the North-South corridor and the Northern Sea water area - the main pillar and center of intersection of all world trade routes.

Ctrl Enter
Noticed oshЫbku Highlight text and press. Ctrl + Enter
We are
List of destroyed the largest and most high-tech enterprisesMilitary reform as an integral part of the security concept of the Russian Federation: Systematic dynamic assessment
Military Reviewin Yandex News
Military Reviewin Google News
90 comments
Information
Dear reader, to leave comments on the publication, you must sign in.