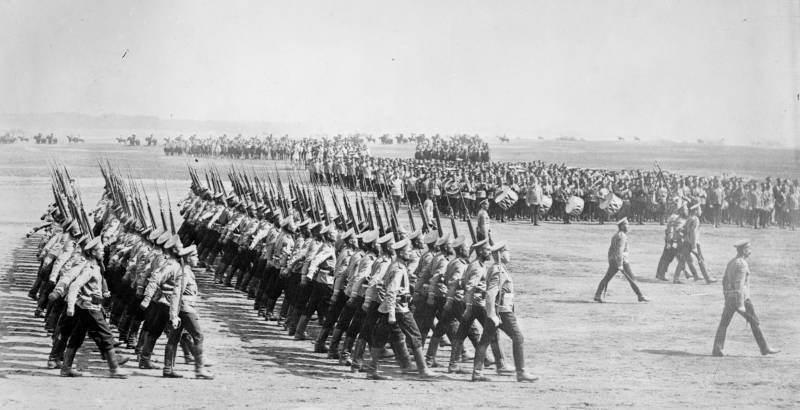 The members of the Infanteriya club are reconstructing, thus paying tribute to the memory and respect to their fellow countrymen from the 209 Infantry Regiment of Bogorodsky, who fought during the First World War.

The regiment was part of the 1 brigade of the 53 th Infantry Division of the twentieth army corps of the 10 th Army of the Northern Front and fought in East Prussia.

During the retreat of the 10 Army from East Prussia in January-February 1915, the regiment covered parts of the 20th corps, was surrounded by the enemy in the August forests and suffered huge losses. Only about 200 people reached Grodno. Only a small number of Bogorodtsev fell into German captivity.

30 April 1915, the newly formed 209 Infantry Regiment of Bogorodsky, which was staffed by officers and soldiers from other regions of the country, became part of the 34 Army Corps of the North-Western Front that was formed. In 1916, part of the XXIII Army Corps participated in the Brusilov offensive in Volyn.

We recorded several stories of the club commander Andrei Bondar about the infantry weapons times of the First World War, which will be placed in the series "Tales of weapons." Andrew has a very impressive knowledge of the weapons of the time, we are sure it will be very informative.

But we will begin our stories with a demonstration of the uniform and equipment of the infantryman of the 209 Bogorodsky regiment during the First World War.

For those who do not like to watch the video (although it is worth it), we partially duplicate it in the old manner.

The Russian infantryman, going to the battlefields of the First World War, was equipped no worse than his allies or opponents. 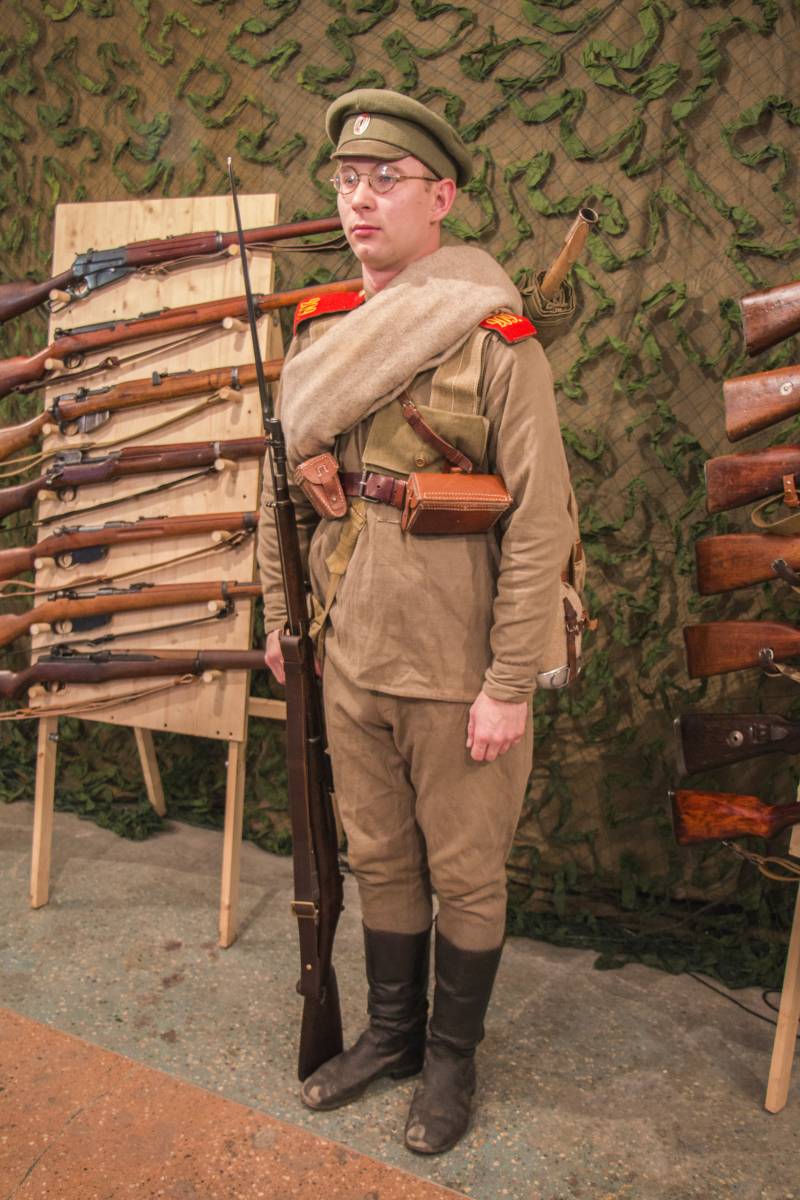 We begin the review, of course, with the form.

The underwear consisted of underpants and a shirt made from cotton fabric. A uniform consisting of breeches and a tunic was also made of cotton fabric, or, for areas with a colder climate, of cloth.

Equipment. What the Russian infantryman took with him on the march. 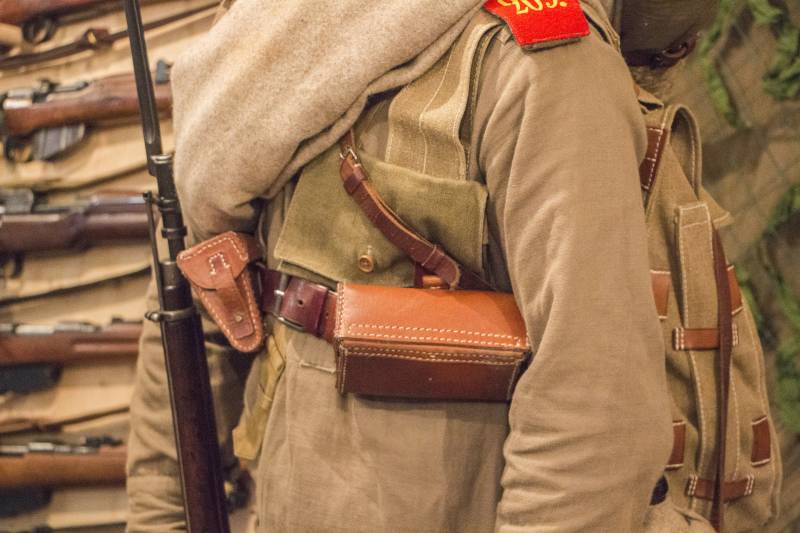 Overcoat From the so-called greatcoat cloth. In the warm season in skatka. To the ends of the overcoat did not crawl, a bowler and two leather straps were used for fastening. 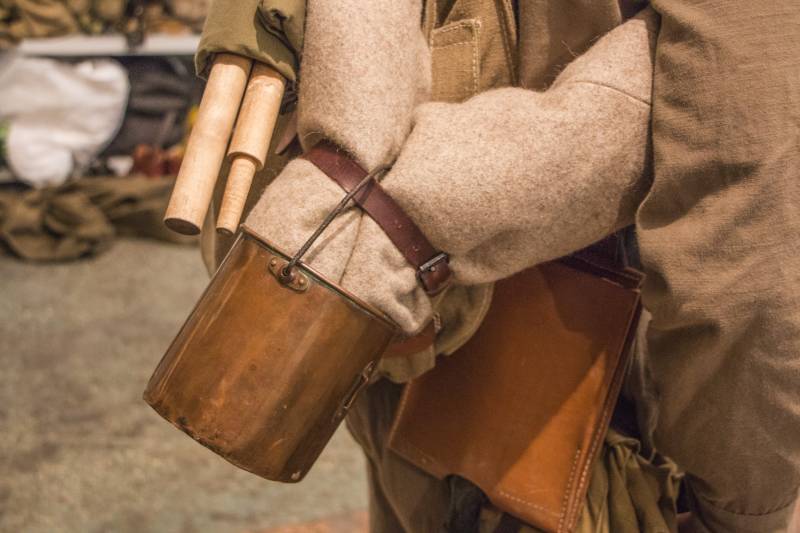 The cloak with a set of pegs and pins was attached to the overcoat. It was necessary to have a rope about 3 meters long to fix the assembled tent. 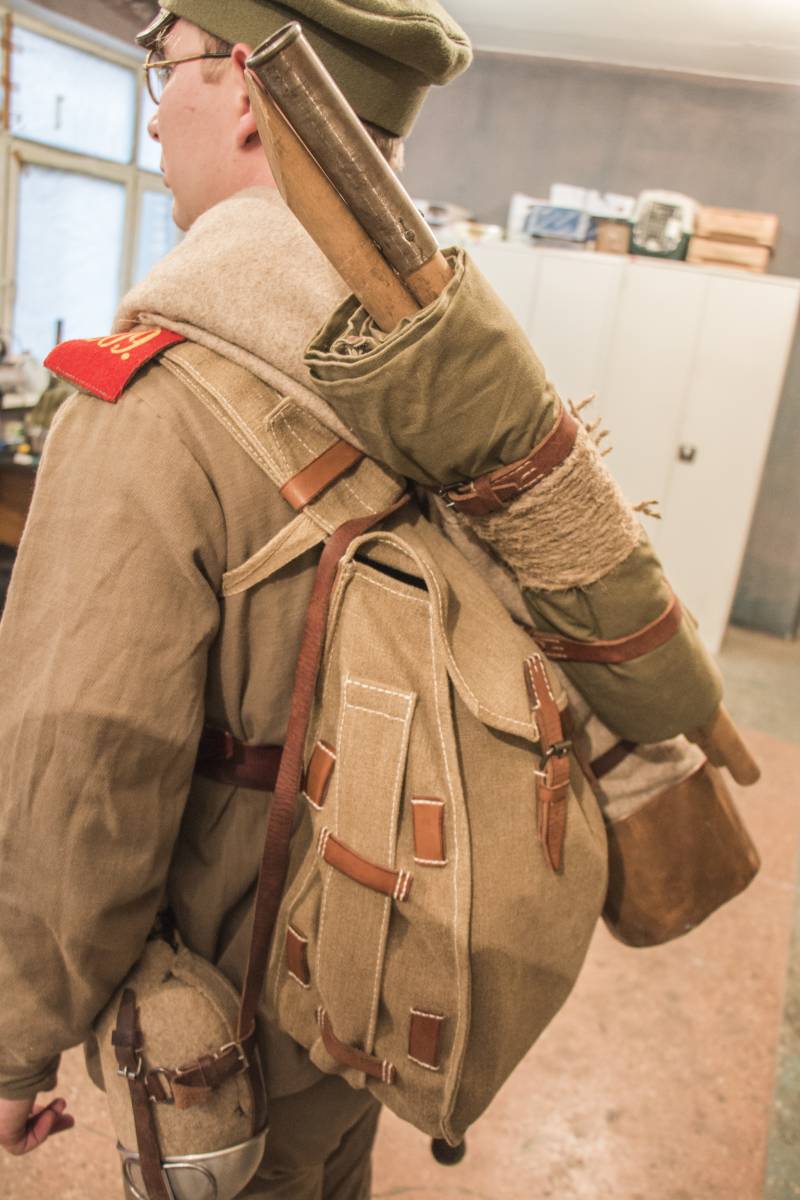 In the cold season, when the overcoat was on the fighter, the raincoat with accessories was attached to the knapsack. 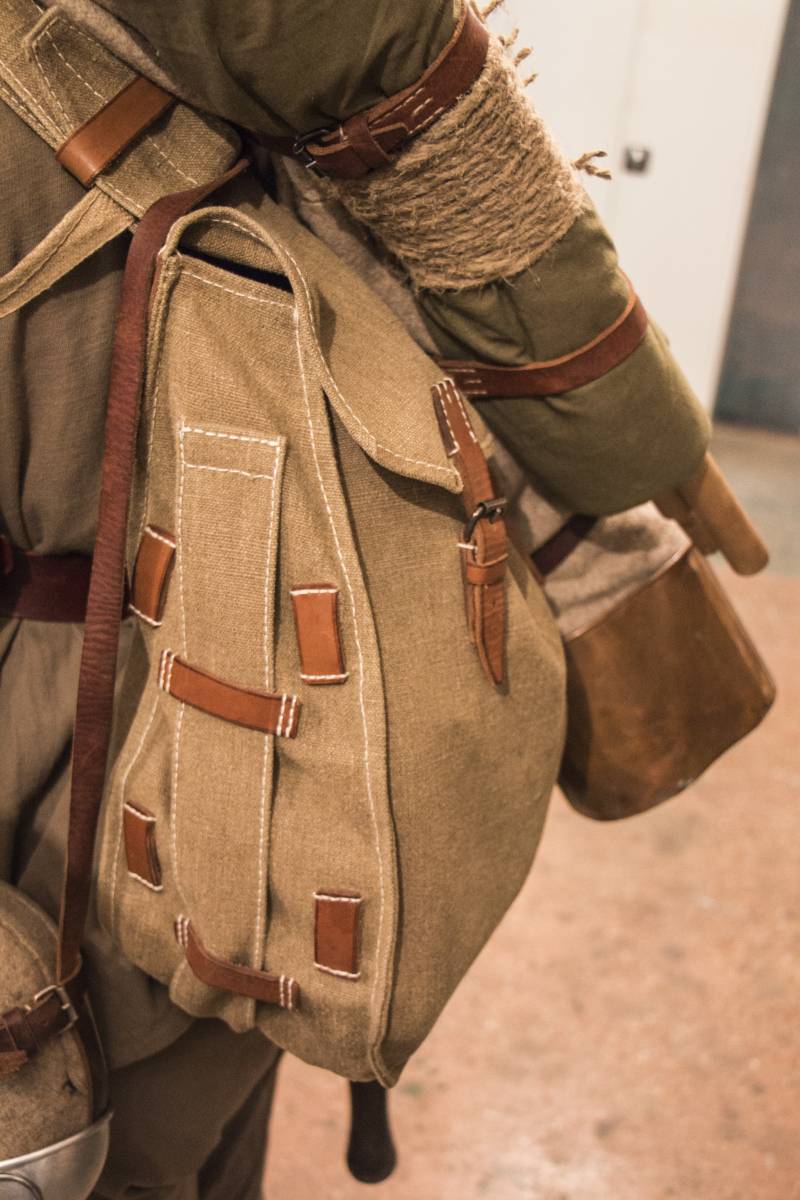 Satchel. Intended for storage and transportation of personal belongings of the soldier. A set of linen, footcloths, windings, personal hygiene items, stock of tobacco.

Each fighter relied small infantry shovel. Which was later called the sapper, but the correct name is just that. The blade holder was originally made of leather, and in time it began to be made from substitutes, tarpaulin or canvas. 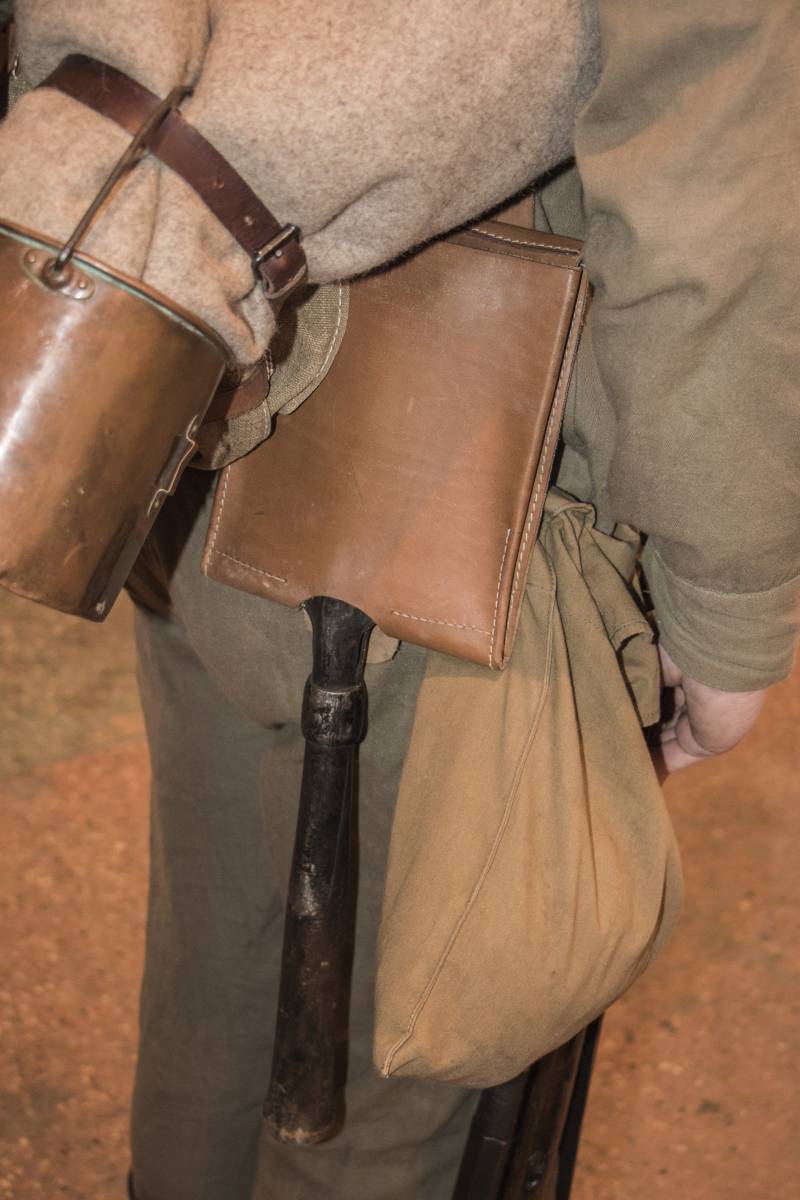 Flask. Glass or aluminum, necessarily in a cloth case. The cover played the role of a heat insulator, and allowed not to heat the liquid in the heat or vice versa, not to freeze quickly in the cold. 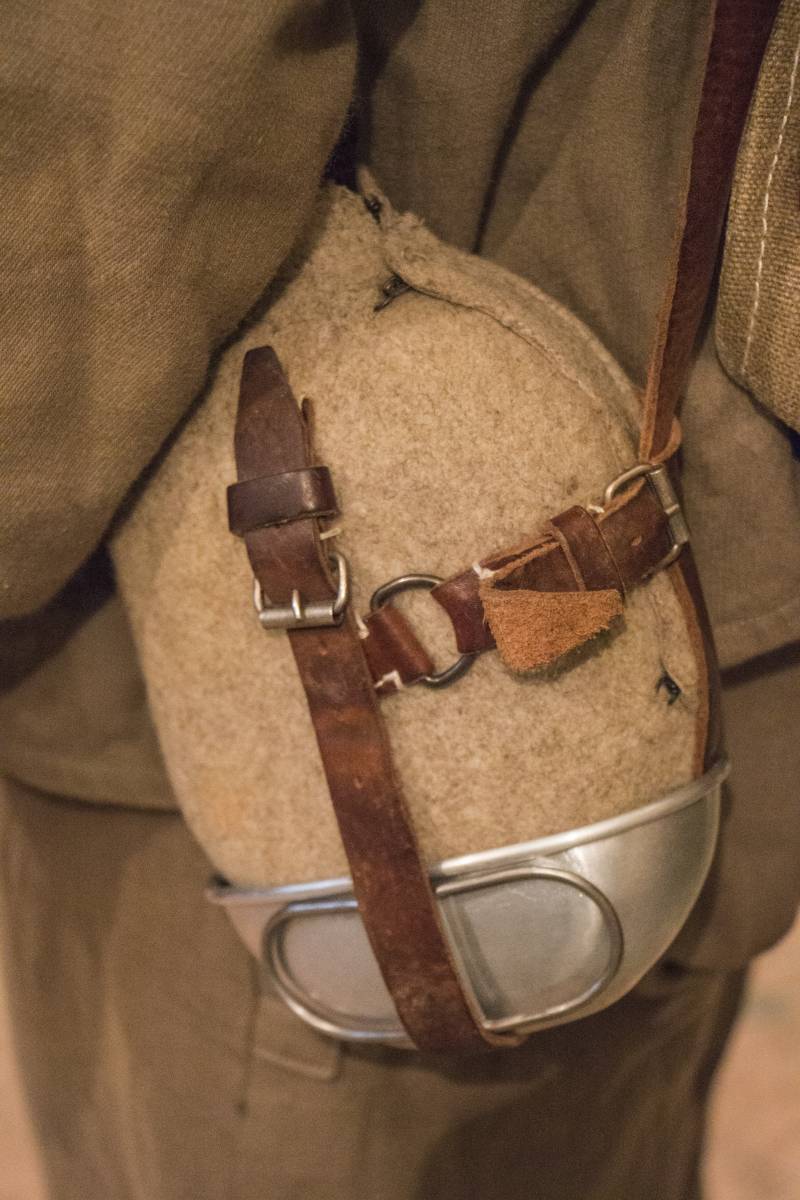 Aluminum flask was attached to the flask (cup) for use, for example, alcoholic beverages. Charka Alcohol was relying on the Russian soldier 10 once a year, on major holidays. So basically the cup was intended for hot tea.

Cap. The standard headdress of the Russian infantryman was made either of cloth or of cotton fabric, depending on the climatic conditions. A steel spring was originally inserted into the cap, but it often broke, so it was not forbidden to wear a cap without a spring. 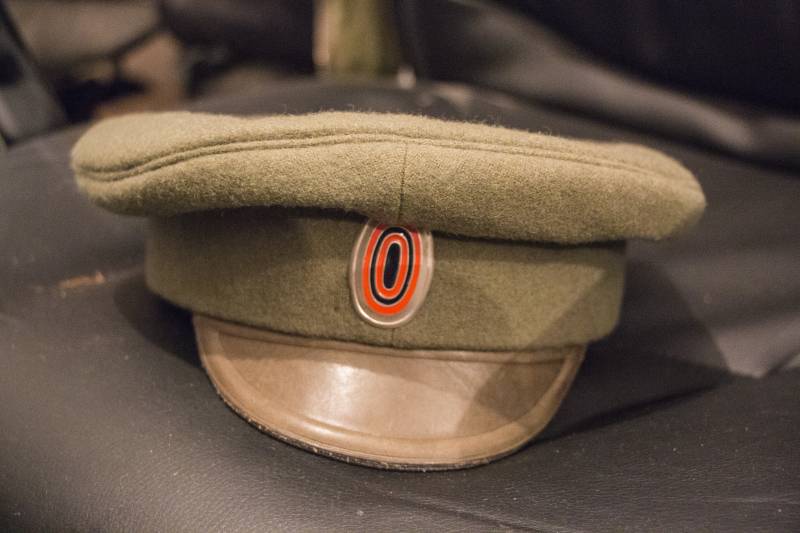 In winter, the soldier was given a sheep wool cap and camel hood.

Epaulettes The Russian soldier's shoulder straps were field (green) and ordinary, red. Guards regiments wore epaulets, sheathed edging "corporate" color of the regiment. On the epaulets usually put the number of the regiment.

Boots. The boots in the Russian imperial army were leather. 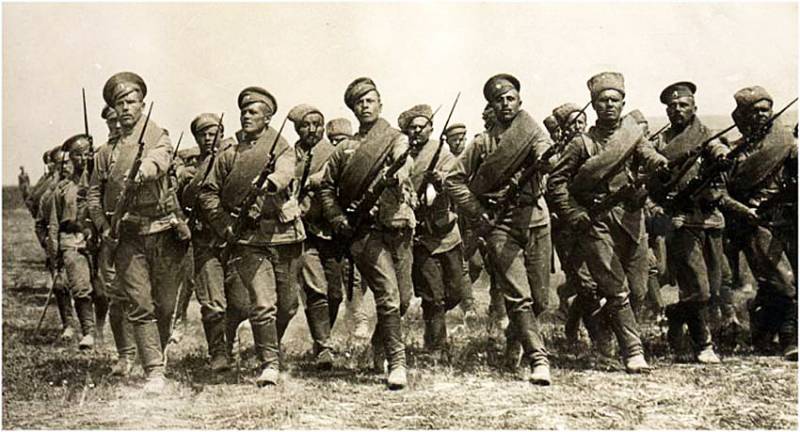 Over the course of the war, cheaper shoes with windings came into use. Winter shoes were boots.

The last detail in the soldier's equipment was a weapon. In our case, the Mosin rifle of the 1891 model of the year. And a bayonet. The bayonet should always have been attached.

Rifles were equipped with a belt, which, however, was not intended to be permanently worn. According to the regulations, the rifle was worn in the “on the shoulder” position. 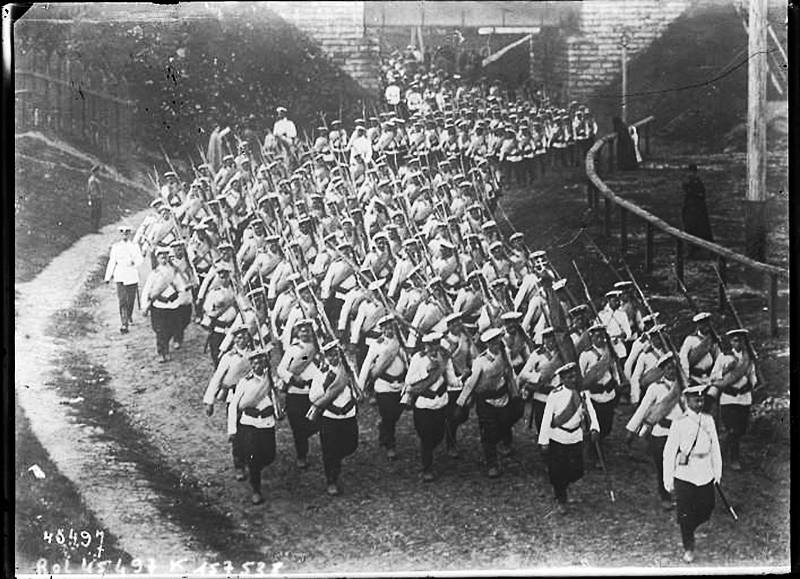 We will tell you about the Mosin rifle itself and its rivals in the following articles prepared with the participation of the Infanteria Club.

Ctrl Enter
Noticed oshЫbku Highlight text and press. Ctrl + Enter
We are
Where does the world "global governance" lead?Reports from the militia of New Russia for 1 September 2014 of the year
Military Reviewin Yandex News
Military Reviewin Google News
20 comments
Information
Dear reader, to leave comments on the publication, you must to register.