How about ... blinked the system of glorification of Nazism

November 21 2017
146
“We must immediately check the educational programs of the Novy Urengoy gymnasium!” - are outraged in the Federation Council. “We need to punish the director, the teacher stories and those who composed such a text and agreed for a high school student who spoke in Germany! ”,“ they may have missed, missed, misunderstood, ”say the local legislative assembly.


Hack tails, carry out backdating, - this is not to take away from our regulatory agencies. If, in the text, thirty-three times not to mention that ISIS is a banned organization in Russia, then they will definitely take care of you-comrades from Roskomnadzor will run, they will send numerous letters with notifications that the case is being brought to court, because .

In general, the fact is that the case in the Bundestag forced Russia to be outraged, and officials pay attention to the fact that "not all gymnasiums are equally useful." The fact that there are educational standards, but often these standards do not even closely take into account such a simple and completely unambiguous concept as “conscience”.

What is this material about? The fact that the case of the Novy Urengoy gymnasium student is only the tip of the iceberg. The tip of a huge iceberg, which is the result of the work of the real system itself, the purpose of which is one: revising history, planting among the younger generation of seeds of doubt about the significance of the victory over Nazism, the abolition of traditional values, the glorification of what was never acceptable to the Russian people. And this is not only an education system, which has long been launched on gravity, and the entire discussion of which by the bureaucratic apparatus has recently been reduced only to “how well the students in your school have passed the EGE.” It is also an information environment, which frankly makes one doubt that someone from responsible officials is interested in the younger generation in the country.

Separate information resources, to which today's young people have direct access, often act on the very templates, which give the modern child / adolescent a reason to think about whether it is necessary to consider the feat of the Soviet people as a feat. “But wouldn't it have been necessary to surrender Leningrad, Stalingrad, Moscow to the Hitlerites” - “now they would all live in burghers and sip exclusively freshly brewed German beer” ...

The administrations of social networks to inquiries about the need to pay attention to overtly extremist and Nazi propaganda groups in which there are hundreds, thousands of representatives of the Russian youth, often either not at all (even the official request from the media) do not respond, or send a reply from the series: "There are button "complain" - dare ".

And even now I am in a difficult situation: if you submit full links to such groups, the Roskomnadzor mentioned above will accuse Nazism in propaganda of not at all those who create and supervise such groups, but our information and analytical portal. Like, we had to tell us, and we would have figured it out ourselves later. So after all appealed repeatedly. Here are just a bureaucratic machine is clearly not keeping pace with the person, spreading information about the "good nations, on which the" advice "just slandered." For the time being, the controlling authorities will react to the request, which, in their opinion, should “be properly laid in the drawer of the table”, in extremist groups they are celebrating the subscription of the next thousand visitors. For now, the experts will find out whether the group in which Adolf Hitler is called “an outstanding politician of the 20 century”, and his army as “the army that cleansed the planet” is extremist, is the group that will be renamed ten times, will re-register and will continue to powder our brains children with triple strength. From the series - try and prove, try and catch up.

Next - offhand groups that feel great in the social network VKontakte. Again, in order for the “Military Review” supervisory authorities not to accuse of propaganda, it will be necessary to modify the names somewhat.

The groups “This is all Germany”, “Fuhrer” and others. Recently, the first mentioned group is not replenished with new materials, however, it is enough to “old” to conclude what goals the group pursues. Here is what the user who created the “public” writes in the preface (the author's text is saved):

"History is written by winners" is a well-known phrase about the "veracity" of official history. The same can be said about the Third Reich and Adolf Hitler.
Hitler is considered a terrible butcher, a killer of millions, and simply not a man. We will devote the first part of our story to Hitler.
- Hitler was a bloodthirsty butcher and killed millions of people: there are always victims under the dictatorship. Let us now remember, against whom Hitler fought: against Jews, Poles, Gypsies, and the like, who flooded the whole of Germany. So that everyone can understand what is being said - I will compare them with Caucasians - they flooded Russia. Hitler just wanted to clear the country of them. What he did. Recall that in the USSR they also fought with the Jews (a Jew and a Jew were one and the same). And the Jewish Autonomous Region was created by chance - all Jews went there. EAO exists today.
- Hitler is not a man and a hero: even dictators are from a clan of people. Hitler was a literate politician (to raise Germany after the chaos and fulfill all election promises - and you are weak?), An artist (but he was not accepted at the academy), and a writer (well-known Mein Kampf). And his "cruelty and inhumanity" - the opinion of this comes from his measures against the Jews in Germany.

Several other entries and illustrations to them:
Whatever scoops say, but the Germans were still people. And not bloodthirsty and cruel killers. 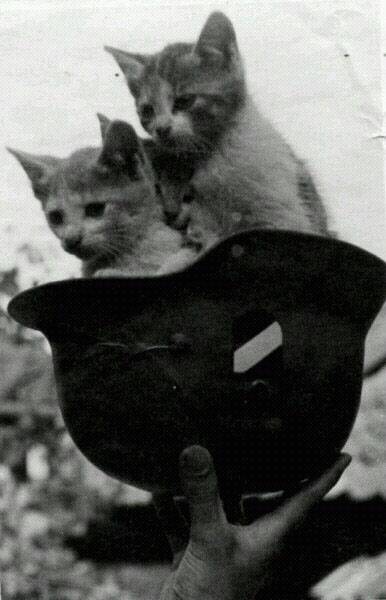 Well, it turns out that the text of the high-school student seems to be already “correct” - after all, what kind of good people these Wehrmacht soldiers are - they wore kittens on their hands in a helmet.

"SS troops, say ... Yes, they were not monsters - see for yourself how this cat thrives": 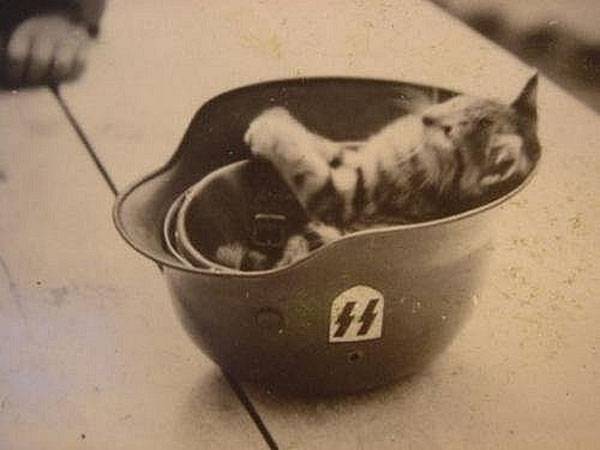 In the same group, memoirs of German soldiers telling about “heroism” were actively published (and “hang” so far). One of these with an illustration:
Feldfebel Zermond, instantly assessing the situation, resolutely jumped out of his tank, climbed onto the Russian car and threw a hand grenade into the tower, thereby finally incapacitating the tank. (For this heroic act, sergeant major Zermond received the tank destroyer sign in close combat, being one of the few tankers marked with this sign). 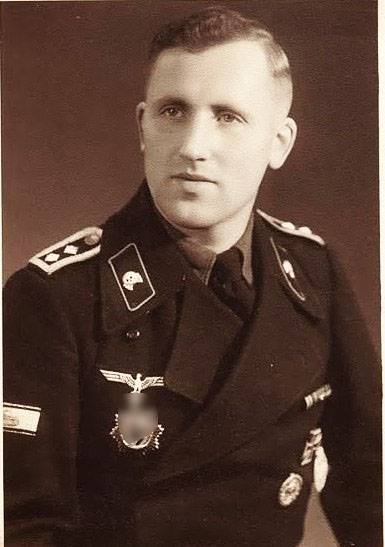 It would be possible to pass by it that, as they say, not to force. Well, no - they passed by too long. So long that the social networks were literally filthy in such groups. They clone each other, they are engaged in frank propaganda of Nazism - openly and brazenly. These are entire communities where heroes are those who destroyed millions of Russians, Ukrainians, Belarusians, Jews, Poles. These are entire communities that actively enter into the educational system. By the way, the aforementioned "public" is entitled specifically as an "educational institution." That's it. They work, but we continue to chew, excuse me, snot and say to each other: well, why should I pull it all out, why should I get too much PR? No, this is not PR. This is an attempt to reach out to those who constantly declare how high the level of our education has soared, how well our children are protected, how much a teacher can fill in "kiloton" of the "most important" papers in a working day. Modern children will not believe what the clever mustache wrote in the textbook. It is enough for them to look at such a group and see a kitten, comfortably lying in an SS officer’s helmet, to make its conclusion about “innocent German soldiers - victims of the war”.

While some teachers were forced to get bogged down in papers, others take the opportunity to play on the conjuncture and put a plus in the "international events" section - after all, the creative, innovation, tutoring. Again, officials will report that innovations, including "educational Internet resources, support. See also additional funding will be knocked out. Of course, it is advisable to optimize schools in the village, and innovative clusters for schools to give birth to. Patriotic portals - "It is advisable" to press, and govnosayty from the category of liberal fakenews with the eternal whining in the style of "Rashka everything" will certainly support, so that the progressive West is suddenly not angry.

In general, while it only pretends that the information space is safe for the modern schoolchild, Nazi crap will continue to climb from wherever the opportunity arises. So far only pretending that patriotic movements are being supported is being done, nothing will fundamentally change. After all, we are dealing with a system, a system, in fact, of Nazi revanchism, which in local areas is completely visible front celebrates victory after victory over the minds of representatives of modern youth. And it is unlikely to dismiss this fact.

Ctrl Enter
Noticed oshЫbku Highlight text and press. Ctrl + Enter
We are
Situational analysis of the death of the MH17 flight (Malaysian Boeing 777), made on the basis of engineering analysis from 15.08.2014Results of the week. “In our cooperative, the board is always agreed”
146 comments
Information
Dear reader, to leave comments on the publication, you must to register.