Three in a boat: how Syria becomes a haven 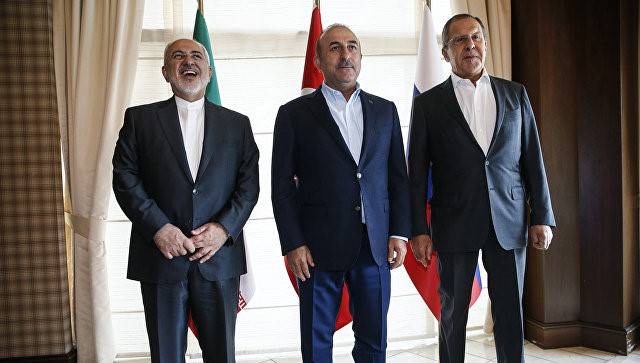 In parallel with how Syrian government forces complete the sweep of the city of Abu Kemal, finally knocking the ground out of the hands of terrorist groups, a number of countries advocating an early end to the conflict in the Arab state are engaged in resolving the crisis in the republic on the diplomatic front.

A meeting of the foreign ministers of Russia, Iran and Turkey, devoted to the Syrian issue, ended on Sunday in Antalya. As a result of the conversation, the heads of the diplomatic departments stated the decrease in the level of violence in Syria and came to the conclusion that the current situation allows for the resolution of the crisis in the country through political means. In particular, the parties were able to bring positions closer to the issue of truce and reducing tensions in de-escalation zones, noting that at present the situation in the republic is much better than it was recently.

Separately, it is worth noting that the communication of the foreign ministers of the three countries became a preparatory stage before the upcoming 22 November meeting of Moscow, Tehran and Ankara, which will also be devoted to Syrian topics, and also precedes the convening of the Syrian National Dialogue Congress in Sochi the beginning of December.

With a great deal of confidence, it can be assumed that the above events, to one degree or another, will become the catalyst for the actual reorganization of the Syrian Arab Republic, and their participants will act as guarantors of its territorial integrity. The fact is that the parties involved in the negotiations, in close cooperation with official Damascus, are today the only force in the region capable of actually influencing the situation and putting the country on a peaceful settlement track. However, if with Russia and Iran everything is clear from the very beginning - during the seven years of war the two states supported the legitimate Syrian leadership, then with Turkey, which for a long time was dependent on the position of its main NATO partner, the United States, everything was not so clear from the start.

Nevertheless, now Ankara, apparently, has finally decided on its views on the situation in general, and on the issues of regional security in particular. What made the Turkish leadership to radically reconsider the approach to the problem and to infringe on their own ambitions? The answer is obvious: a sober assessment of the imbalance of forces in recent years in the Middle East.
From the very beginning of the Syrian conflict, the United States relied on the formation and full support of the armed groups of the “moderate opposition”, often acting on the same side of the barricades with terrorist groups, Russia and Iran were on the side of the legitimate government of Syria and the civilian population, assisting the local military. Thanks to this interaction, the Syrian army managed to reverse the course of hostilities and deploy an operation, the purpose of which was the systematic squeezing of gangs from the occupied territories. Actually, it was this circumstance that became the “Gordian knot” that Washington has so far failed to cut.

Of course, the alignment in which the key ally is not able not to defend the interests of the partner, but also to protect its own geopolitical claims, did not promise Turkey bright prospects and forced President Tayyip Erdogan to look for options for retreat and reformatting the foreign policy agenda. In general, we can observe the results of the maneuvers of the Turkish leadership now.

As for the Turkish-American cooperation in the framework of the North Atlantic Alliance, which, as a result of the events described, was expectedly under threat, disagreements did not exist the first day, but frankly hostile relations were only recently.

It all started with the fact that Turkey turned to Russia with a request to sell it the C-400 anti-aircraft missile system instead of the Patriot anti-aircraft missile system in the country, which displeased the Pentagon, which declared the inadmissibility of such an approach on the part of the Alliance member. However, the response of the military-political bloc to such self-will of one of its members did not take long to wait: during the recent NATO exercise Trident Javelin, the portrait of Mustafa Kemal Ataturk, the founder of the Turkish Republic, was on the stand of “enemies, and Tayyip Erdogan himself was listed conditional opponents of the alliance. And, despite the fact that the organization’s secretary general, Jens Stoltenberg, has already apologized to the Turkish leader for an annoying mistake, promising to deal with the perpetrators of the incident, the sediment, as they say, has remained.

Already so timely was the mistake that now it looks more like a hint. Also very transparent ...