November 20 2017
255
The head of the administration of New Urengoy, Ivan Kostogriz, decided to stand up for a schoolboy at a local gymnasium sent as part of a delegation to Berlin to submit a report on the Great Patriotic War. Today "Military Review" published material about how high school student Nikolai Desyatnichenko, speaking in the Bundestag, said that "German soldiers did not want to fight," and that their graves in Russia "are in a terrible state." The young man called the very dead in captivity in Hitler invaders in the USSR “innocent people who died”.


Ivan Kostogriz published his statement about the speech of a student from Novy Urengoy on the official website:
I urge to be guided by common sense, assessing the performance of the student in Germany. Meeting of Russian and German children on the Day of Remembrance and Grief in Germany is a long tradition. In the words of the head of state, “Russian and German schoolchildren come together and together can look at the tragedies of the past, together analyze the consequences of national intolerance, the desire to enslave entire countries and peoples.”

Nikolay Desyatnichenko shared his discoveries that not all Germans wanted to fight, many just wanted to live peacefully. In no case can this be regarded as a boy’s attitude to fascism. His speech is an example stories This German soldier calls for a peaceful existence throughout the world and the rejection of war, bloodshed, fascism, suffering and violence per se.

I will note that the children of the New Urals Region are always distinguished by a feeling of patriotism, love for the Motherland, pride in the history of the Russian state, the feat of their grandfathers and great-grandfathers. The interpretation of adults by the child’s sincere words can be regarded as a provocation not only against the student, but the entire Russian people and our attitude to the events of the history of the Great Patriotic War.

I am sure that common sense will win.

Meanwhile, the Federation Council initiated a check in the same gymnasium, which sent the student with his message to Berlin.
It was noted that the program for which students of the gymnasium are engaged should be studied in detail. In the upper house of parliament they said they consider such speeches unacceptable. 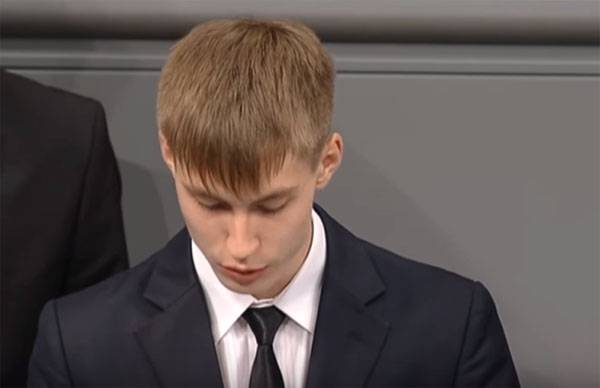 A deputy of the legislative assembly of the Yamalo-Nenets Autonomous District, Elena Kukushkina, in connection with the student’s speech, sent an appeal to the regional prosecutor’s office, the department of education and the local gymnasium. According to her, the adolescent's speech itself was prepared tendentiously, which read from such phrases as “German soldiers fought”, “German soldiers who fell in battles”, “innocent people who died”. According to the deputy, at this rate you can reach the revision of the results of the Great Patriotic War.

Everything is as usual: they started to check after the incident manifested itself, and in this case it also showed on the international arena.

Ctrl Enter
Noticed oshЫbku Highlight text and press. Ctrl + Enter
We are
A schoolboy from the Russian Federation in front of the deputies of the Federal Republic of Germany called the Nazi soldiers "innocent dead people"
Military Reviewin Yandex News
Military Reviewin Google News
255 comments
Information
Dear reader, to leave comments on the publication, you must to register.