Russian sport "in neutral status", or WADA against RUSADA

November 21 2017
19
The prolonged scandal associated with the “state doping system” in Russia led to a predictable decision of the board of founders of the World Anti-Doping Agency (WADA): The Russian Anti-Doping Agency (RUSADA) will not be restored in its status. Meanwhile, the head of the Russian Olympic Committee, Alexander Zhukov, popularly explained that Russian candidates for Olympic performances in Pyeongchang participate in qualifying competitions and pass doping tests confirming the integrity of athletes. However, in the West, Zhukov’s opinion is not interested. 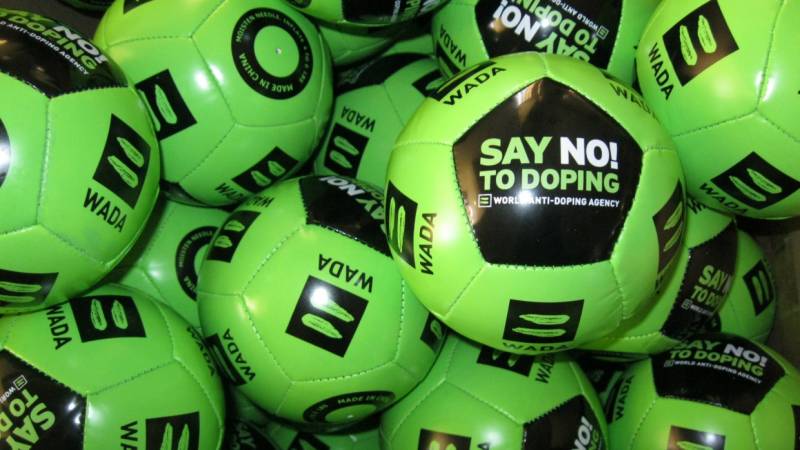 The theme of the confrontation between WADA and RUSADA is of great concern to the Western public. Already the second week about the notorious doping scandal, as well as the decision of WADA write the largest US and European media. No wonder: the participation of Russian athletes in the XXIII Winter Olympic Games, which will be held in February 2018 of the year in Pyeongchang (Republic of Korea), depends on the struggle of anti-doping organizations and those behind them.

Home news: By decision of the founders of the World Anti-Doping Agency (WADA), the Russian Anti-Doping Agency (RUSADA) will not be restored to its status. No matter what the Russian officials from the sport say about WADA decisions, athletes from the Russian Federation will probably be able to get to the new Olympiad only under a neutral flag. In any case, the probability of this is very high, the precedent is known.

The scandal with the WADA decision came out noisy, but predictable. Few people expected that everything would turn out smoothly for Russia, and in the West they would simply forget about previous doping scandals and revelations. Do not forget, and for many reasons.

Mr Pound’s famous report on the “state system” of doping in Russia, published a couple of years ago, has already entered the world history sport The noise about the "doping system" in Russia has not subsided since. Various structures, from the Ministry of Sport to the Federal Security Service (FSB), which supposedly organized doping, are inclined. Recall that the Pound document featured the director of the Moscow laboratory, Grigory Rodchenkov (at that time already the former; now Rodchenkov is an emigrant, since January 2016 has been living in the USA and is apparently protected, because he is an informant for WADA). Grigory M. Rodchenkov - Candidate of Chemical Sciences, a specialist in the analysis of biological samples and the detection of doping, was the director of the Russian "Anti-Doping Center" in 2006 — 2015. It was he who flagged positive doping tests as negative. He did this ostensibly not according to his own initiative, but as a result of “consultations” in the Ministry of Sport. These revelations Rodchenkova later received a sequel, which added fuel to the fire.

The Pound report was followed by two Richard McLaren reports. Then the IOC (International Olympic Committee) Commission, under the leadership of Dennis Oswald, took up the weaning of medals from the Russian Sochi Olympians. The decisions made, affecting the Russian athletes, are hardly the last. There is only to get a taste!

"The IOC, after the proposals of the special commission of Dennis Oswald, has already dismissed six Russian skiers from the Olympic competitions for life," writes "Sports panorama". - But the meeting continues. Yesterday, for example, the cases of suspected biathletes Olga Vilukhina and Yana Romanova were considered. That is, two more Russian Sochi silver medals are in question. ” “Moreover, the initiator of the revelations, Grigory Rodchenkov, promised to provide new information. In addition, it became known that the IOC and WADA have at least one more informant from among foreign coaches who prepared Russian athletes for the Olympics, ”adds the publication.

Against this background, Moscow should not hope for any rapprochement on the Olympic anti-doping topic. WADA officials are not impressed with the achievements of RUSADA in the fight against doping inside the country, despite assurances from Russian officials, including the head of the Olympic Committee, A. Zhukov, about the honesty of Russian athletes preparing for the Olympics in Korea.

And for the “negative reaction”, WADA has all the formal grounds: Moscow did not recognize one of Mr. McLaren’s reports and did not give out those thousands of samples from the laboratory that the Investigative Committee of the Russian Federation had sealed when investigating Mr. Rodchenkov’s case. All the Western press is now writing with enthusiasm about it - from the USA to Europe.

Moscow, we note, hardly will go to such a recognition, because agreeing with McLaren’s conclusions and issuing samples would mean agreeing to the existence of a “state system” of doping in the country. At the same time, this would give the West additional advantages in its political game against Russia. So it remains for Moscow to talk about the honesty of today's athletes.

The forecast of whether the Russian national team will go to Pyeongchang was made by the head of the Russian Olympic Committee, Alexander Zhukov, who returned from Pyeongkhan, where he had just appeared before anti-doping officials. His words leads the TV channel "NTV":

“These two processes - the restoration of the Russian anti-doping system and the participation of Russian athletes in the Olympics - are not related to each other. WADA and the International Olympic Committee, which determines the order of participation in the Olympic Games, are completely different organizations, and each is responsible for their area. Although before the Olympics in Rio, WADA decided to recommend the IOC not to allow our team to the Games, now WADA does not make such decisions, because it is not his business. ”

Zhukov also said that Russian athletes who are candidates for performances in Pyeongchang now participate in qualifying competitions and regularly take doping tests that confirm their honesty: “An athlete who participates in competitions throughout the season, passes the doping tests, he has all the negative tests. There is no doubt that he does not take illicit drugs, and there is no doubt that he can compete in all competitions. ” According to Zhukov, sports officials will try to convey their position to the people who make the final decision at a meeting of the IOC Executive Committee.

Zhukov also did not deny the “manipulations” that had taken place earlier: “Yes, of course, we hear calls from a number of countries today to prevent our team from precisely because there were some previous manipulations. But in our opinion, this is an absolutely unjustified approach, an attempt to introduce some kind of collective responsibility, to make athletes responsible for someone else's sins. ”

While Mr. Zhukov acknowledged "sins of others", a major Western press was scolding with might and main to the Russian Anti-Doping Agency (RUSADA). Reuters It recalls that RUSADA's activities were suspended from the publication of the WADA report in 2015, when "evidence of sponsored [Russian] doping state was discovered."

WADA has formed a “roadmap” for Russia, which was supposed to take the path of correction, but now, on Thursday, it was recognized that the key requirements of the commission “were not met”.

WADA President Craig Reedie (Craig Reedie) said that the Council approved the recommendation of an independent committee that monitored Russia's compliance with the requirements put forward to maintain the status of RUSADA as an agency that did not meet the required level. The reason for this decision was the failure of two key requirements (listed above). By the way, the council rejected not only Russia: Kuwait, Equatorial Guinea and Mauritius were also recognized as “inadequate”.

Such a decision is likely to create some pressure on the International Olympic Committee, and he will (quite probably) advocate a ban on Russian athletes from participating in the Winter Olympic Games 2018 of the year on behalf of the country.

The Kremlin considered the decision WADA unfair, the publication indicates. Moscow insists that Russia does not conduct a state-sponsored doping program. "We do not agree with this decision," - quoted by the agency spokesman for the President Dmitry Peskov. Peskov denies "categorically" all the charges of doping and the "state support" of doping. "This is out of the question," said Peskov.

The director general of the Russian Anti-Doping Agency, Yuri Alexandrovich Ganus, said that his agency did everything possible to restore its status, with the exception of two requirements that were not met because they could not be controlled by the agency. “We have fulfilled all the requirements that depended on us,” Ganus quoted the publication. What exactly the two requirements were not met, Ganus did not disclose. However, Reuters points to the refusal of the Russian authorities to recognize the findings of the report on “state-supported systematic doping in 2015” and the refusal to “release samples from their Moscow laboratory.”

Russian Sports Minister Pavel Kolobkov also commented on the decision of WADA, the agency said. He noted that some of the criteria for the restoration of RUSADA are “political”. According to Kolobkov, Russia has done everything possible to restore the status.

Reuters recalls that the report, published by Canadian lawyer R. McLaren in 2016, found that more than 1000 Russians, who participated in more than thirty sports, “were involved in a conspiracy” that allowed them to “hide positive doping tests” . The "conspiracy" lasted five years. Now, a few days ago, the WADA stated that they had received a database confirming R. McLaren’s claims about widespread “state doping” in Russia.

USA Today quotes Dick Pound, a member of the IOC of Canada and a member of the board of WADA. According to him, if Moscow does not make concessions, Russian athletes will have “one more obstacle” to participate in new games. And this "obstacle" will affect the decision of the IOC, he said. Pressure on Russia will grow, and the IOC will find it difficult to make a decision: in Russia, after all, there is no longer an accredited laboratory or an accredited national anti-doping agency. And it is impossible to ignore, sure Pound.

On the WADA side, no change in attitude towards Russia is foreseen: in a recent interview with Reuters, WADA CEO Olivier Niggli stressed that the road map will not change. "We will not assume that they have fulfilled the conditions while there are still unfulfilled points in the roadmap," USA Today quotes him.

It remains to wait for the decision of the IOC Executive Committee (December 5 — 7 will be known) about the participation (non-participation) of Russia in the upcoming Olympiad.

As for WADA, they have repeatedly stated that they are not going to influence anyone in the IOC and will take a decision of the committee, whatever that may be. Such statements, whatever they are based on, seem dubious, because the IOC cannot ignore such a loud international scandal, in which the press throws a coal every day. Passions are very high. Therefore, it is likely that the IOC will “allow” Russian athletes to go to the winter games in the so-called neutral status, that is, not under the flag of the Motherland. This will mean the reluctance of officials from international sports, as they say, "to punish athletes."

Observed and commented on Oleg Chuvakin
- especially for topwar.ru
Ctrl Enter
Noticed oshЫbku Highlight text and press. Ctrl + Enter
We are
Accused of dopingTheir fate will be decided by others.
Military Reviewin Yandex News
Military Reviewin Google News
19 comments
Information
Dear reader, to leave comments on the publication, you must to register.