November 20 2017
28
What is the United States against Russia? What is Trump vs. Putin? Almost nothing. It’s easy to explain: no super owner can stand up to a KGB man. The KGB always wins, the KGB always wins, even if with the help of lies. Some Western media think so. By the way, the foreign press reminds that the West lies about Crimea: Crimeans do not talk about the "annexation" of their peninsula, they talk about "reunification with Russia." Therefore, the West fools its head with its own propaganda. 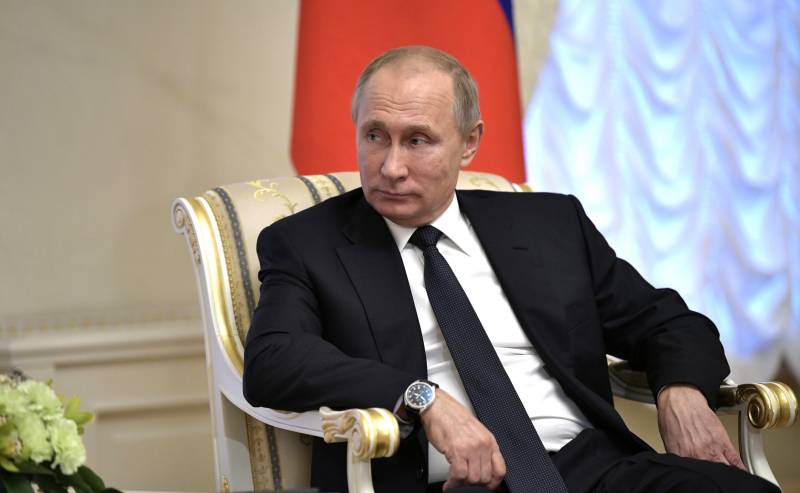 The lauded American bargaining art that has met with KJB is inferior to KJB. The KGB always wins, says John McLaughlin, whose article was published in a magazine "Politico".

The expert made such a conclusion “from a strange episode” of a meeting between President Donald Trump and Russian President Vladimir Putin. Trump believes Putin and in fact admits that Moscow “did not interfere” in the American elections in 2016.

Information: John McLaughlin in 2000-2004 Acting director and deputy director of the CIA, now teaches at the Johns Hopkins School of Advanced International Studies.

After the meeting with Putin, the author recalls, Mr. Trump himself initially created the impression that he "accepted Putin’s assurances." True, then Trump tried to clarify that he continues to believe and the estimates of the US intelligence agencies, "currently headed by wonderful people." Well, the previous intelligence officers say that Russia has just interfered in the elections. At the same time, Trump himself continues to think, relying on Putin’s words, that Russia did not do this. Earlier, the author recalls, Trump ridiculed former intelligence leaders in particular, James Clapper (ex-director of National Intelligence), John Brennan (ex-director of the CIA) and James Komi (former director of the FBI), calling them political intriguers.

What to do with such strange statements by Mr. President?

In all likelihood, the US president seems to believe in what he said. It is difficult to apply logic to such “trampism”, the expert laughs, but still “let's try”.

If the assessment of the intelligence community was prepared by the leadership of American intelligence based on "political intrigue" and if the president finds an investigation into the Russian intervention "mystification" (as he most often says), then it is logical to assume that he doubts the assessment of intelligence officers and takes "Putin's refutation."

It turns out that Trump's return to his first thesis (about “mystification”) is only a matter of time.

Further, the expert notes that the President of the United States is either “incredibly naive and not aware”, or Putin is “an outstanding KGB officer who has gone through a good one. school. Or true "all of the above", the author ironically.

The tactic of misleading "practiced in Russian intelligence and foreign policy," says John McLaughlin. Facts and evidence of Russians in this case are not a hindrance.

“Recall,” writes the analyst, “that in March 2014, Putin with an imperturbable face denied that Russia has power in the Crimea, and then in independent Ukraine, although we could see on TV that this was a lie. Then he said that Russia would not annex the Crimea, but he began to do this almost immediately. A month later, he admitted that yes, the Russian forces were indeed there. It may well turn out that Putin will not resist the temptation to repeat this scheme with the elections in the USA, if at some point in the future he will benefit from it, having received some kind of bonus. ” And what the American president does not understand is the fact that the Russians just need to say: guys, we know that you are lying. This conclusion makes McLaughlin.

We need to get rid of it and just “get down to business,” adds the former ceerushnik. Russians will "respect you most when they know that you know what you are talking about."

The expert himself, when he was in Moscow, gave “hard statements on behalf of the US government” to the Russians when he knew that “Russia will deny what we know as truth”.

You should do such things explicitly, openly, “in a businesslike manner” - and “move on”. No diplomatic receptions are needed; Russians "just need to know what you know." “Enough. It works, ”the CIA man boasts.

And the more the president continues to “stir up” the topic of Russian intervention, the less likely the US will take the necessary steps to protect against further attacks by the American electoral system and other aspects of political life. Until the president himself demands federal efforts to tighten the “defense of the elections” that will take place in 2018 and 2020, federal, state, and local efforts will move in the right direction slowly. So the American system is arranged.

And the last “sad fact,” McLaughlin writes, is that the president has the right to think that America should work with the Russians and cooperate with them on certain issues of mutual interest. For example, in Syria. “Putin’s successful defense of the Assad regime” has already led to the fact that the American side really cannot avoid a political settlement. The problem is that as long as the US president "persists" in his current approach to Putin, "few will trust him."

That's the way the “bargain art” gives in to KJB.

Publisher Kirsten Engelstad in a Norwegian newspaper "Aftenposten" suggests to look at Russia and its policy with different eyes. For example, in the Crimea.

The West sees the conflict with the Crimea "one-sidedly," she writes. In fact, it is much more “complicated”.

In the autumn of 2017, Kirsten Engelstad herself visited the Crimea. And I listened to what and how the locals talk about the spring events of 2014 of the year. She grouped five main points that clearly contradict the Western way of thinking.

1. What in the West is called “the annexation of the Crimea by Russia”, the locals call it “reunification with Russia”.

2. According to NATO and hundreds of UN member states, the 2014 referendum of the year in accordance with the Constitution of Ukraine was illegal. Meanwhile, according to the politicians of Crimea, the referendum was attended by an 151 observer from 23 countries, as well as 1240 observers from different Crimean organizations. Lawyers refer to Art. 138.2 of the Constitution of Ukraine, and believe that the referendum and reunification with Russia became legal "after the coup d'état in Ukraine."

3. According to the assurances of the West, the rejection of the Crimea from the territory of Ukraine and its inclusion into the Russian Federation was a violation of international law. But the Norwegian Peter Erebek, a professor of law, refers to Art. 73 of the United Nations Charter, which states that the sovereignty of the people is the highest principle of international law. He believes that people in Crimea should be able to decide their own destiny on their own, including deciding on the issue of independence or return to Russia (after all, this region was part of Russia before 1954): at that time Crimea was “moved” to Ukraine people). Politicians in Crimea also claim that the right of people to self-determination is enshrined in Article 1 of the UN Charter and confirmed in other international agreements.

4. The West claims that when the Ukrainian authorities 22 in November 2015 of the year stopped supplying electricity to the entire population of Crimea (about 2,5 million), they “acceptablely responded” to the fact that Russia reduced gas supplies to Ukraine after years of disputes over the payment of debts for gas. However, already on March 23 of 2015, the Minister of Energy of Ukraine said that his country would stop buying Russian gas from 1 on April 2015 of the year, because “it is no longer needed”. “What would happen,” Kirsten Engelstad asks, “if the government stopped supplying half the population of Norway in the middle of winter?” But in Crimea, its inhabitants, using “improvised solutions,” had electricity for only a few hours a day. And so it was "for several winter months."

5. In September 2017, two years in prison for terrorist activities received one Crimean Tatar. In October 2017, several criminals were arrested and charged with planning terrorist acts. The Helsinki Committee and the Western media have submitted this information as an example of the “persecution of the Crimean minorities by the Russians”. In fact, the highest Crimean religious leader, Mufti Emirali-Khadzhi Ablaev, said that these radical Islamists now have minimal support among the Crimean population.

Five examples that Kirsten Engelstad cited show: the issue of the Crimea and the conflict over it between the West and Russia are "much more complicated", and its unilateral representation by Western politicians only creates distortions. As a result, the western man in the street is subject to propaganda, which is led by Western governments. True, the western man in the street knows nothing about this. Here Kirsten Engelstad visited the Crimea - and learned something.

Mrs. Engelstad did not detect any KGB agents in Crimea. Well hidden, must be.

It would be nice to see John McLaughlin, who stubbornly sees the dominance of the “Russian KGB” and the “lie” of Moscow, about which America knows from somewhere that it is a lie. How does he know, McLaughlin does not speak. Perhaps he, like the unforgettable Jen Psaki, needs to “look in the office.”

Ctrl Enter
Noticed oshЫbku Highlight text and press. Ctrl + Enter
We are
Situational analysis of the death of the MH17 flight (Malaysian Boeing 777), made on the basis of engineering analysis from 15.08.2014Results of the week. "God forbid to see Russian revolt, senseless and merciless!"
Military Reviewin Yandex News
Military Reviewin Google News
28 comments
Information
Dear reader, to leave comments on the publication, you must to register.