Do not happen to Belarus "European": German opinion

November 20 2017
45
Although Comrade Lukashenko looks to the West, he will not make his Belarus European, writes Die Welt. 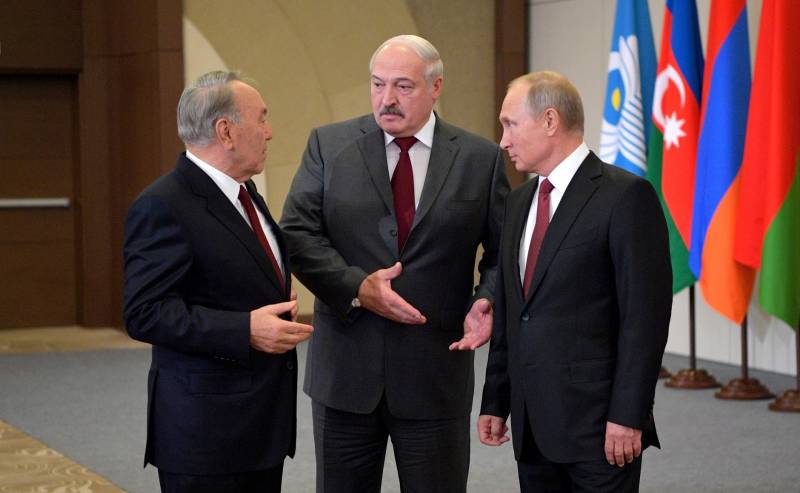 Lukashenko, who looks to the West, will not make Belarus European, quotes the German newspaper Die Welt website "InoTV".

When the Crimea was annexed to Russia, Belarus began to gradually turn away from Russia and turn to the West, indicates “Die Welt”. Why so? It turns out that President Lukashenko is afraid of something. Namely, the fact that Russia will “wipe” once on the territory of Belarus! However, the comrade president is also not in a hurry to make a full turn towards the West: the Belarusian leader cannot become a truly pro-European politician. Democratization of the Belarusian state would endanger its own power! And it is not for nothing that the German newspaper mockingly calls the president “Belarusian dictator”.

Lukashenko, Die Welt continues, initially for a long time acted on the side of Moscow, but after the shock caused by the annexation of the Crimea, his position changed.

Since then, Minsk has been among the “most difficult partners of Moscow” in the post-Soviet space, and “InoTV” cites the opinion of the German edition. For three years now, Lukashenko has been deviating from the “pro-Russian course.”

Meanwhile, Russia condescendingly refers to Belarus. Firstly, Belarus is a buffer zone between the territory of the Russian Federation and the borders of the NATO states. Secondly, Russia is generous to it: from 2005 to 2015. Moscow paid the western neighbor up to 100 with a billion dollars in energy subsidies. However, it is clear to both states: it cannot continue like this. Why should Russia have an ally who does not guarantee her unlimited loyalty?

That is why at the October CIS summit in Sochi, Lukashenko and Putin avoided each other, the publication said. And last year, Minsk refused to pay Gazprom debt in the amount of $ 700 million and demanded a reduction in gas prices. Moscow responded by reducing deliveries (to debt repayment). Moreover, Russia has introduced border control! But such was not the whole twenty years! This was a reaction of Moscow to the visa-free regime introduced by Minsk with the EU states for short-term visits by citizens.

As for Minsk, he did not recognize Crimea as a Russian territory, the newspaper writes. The Belarusian authorities "recommend marking the peninsula on maps and in school textbooks as the Ukrainian region." Belarus behaves in this sense "consistently": after all, at one time it did not support the war of Russia with Georgia and did not recognize the "rebellious republics" of Abkhazia and South Ossetia. In short, according to German opinion, Lukashenko criticizes Putin’s "annexation policy."

“Nevertheless, he [Lukashenko] remains an autocrat, whose domination depends on Russia - just like the Belarusian economy, in which Russian subsidies in recent years account for up to a quarter of GDP,” the publication ironically reveals the republic’s industrial weakness.

Thus, we note, the German press hints at the fundamental discrepancy between Minsk and Moscow. And at the same time, there is no place to “collapse” Comrade Lukashenko: for Europe, he is a “dictator”, and at best, a typical Soviet autocrat, whose regime in the EU, to put it mildly, does not approve. And if the “dad” is less criticized recently in Brussels, it is only because the discord between Moscow and Minsk is beneficial to the West: a split of relatively similar remnants of the USSR is the current strategy of the Western world.