"In the yellow hot Africa you can't see idyll"

November 20 2017
41
Whether a coup, or not - the opposition-minded military of Zimbabwe themselves seem to be confused. On the night of November 15, when a “turmoil” began in an African country, they argued: this, they say, is not a coup. But only "an attempt to punish the criminals surrounded by the president." The very head of Zimbabwe, Robert Mugabe, is supposedly not in danger. 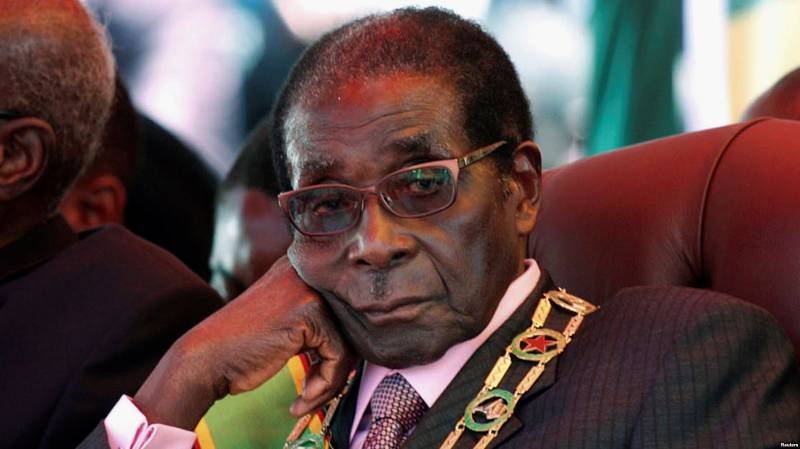 However, the oldest president in the world was immediately placed under house arrest. Apparently, he is currently under serious pressure to voluntarily declare his resignation.

When in almost all media you read about “overthrowing another dictator” - this rhetoric is not to be alarmed. It is precisely the same vocabulary used by "non-survivable" with each "color revolution", organized not without the participation of Western intelligence services. Moreover, the real exaggeration of the situation is very similar, say, to what happened around Libya in the blessed memory of 2011. The “dictator” either “resigns” or “flees the country”. Then, however, the "fugitive" is - and he already appears as either "clinging for power" (if you think in terms of "fighters against tyranny"), or as an adamant fighter who is not so easy to put on the shoulder blade.

In addition to rumors of "retirement" and "flight", in such cases it is customary to tell how luxurious the "tyrant" lived (one would think that some of the Western leaders go to rags). Yes, even drag in the lifestyle of the wife of the head of state (familiar to the pain, in Yugoslavia, Libya, Syria, the motive). It is precisely because, with any overthrow of power in the country with the help of external forces, the same motives are heard, it is difficult to take and take for granted the assertion that "the people are overthrowing an arrogant dictator."

I remember how Robert Mugabe was almost the only leader in Africa who in 2011 dared to sharply and uncompromisingly condemn the NATO bombing of Libya. When the African Union shrugged helplessly, unable to resist brute force, Mugabe offered Muammar Al-Gaddafi refuge in his country. Another thing is that Gaddafi turned out to be a Leader with a capital letter, which did not even consider the option to hide somewhere and save himself. But this position of the President of Zimbabwe, of course, inspired respect.

We, the citizens of Russia, may feel even greater respect for this person because of Mugabe’s position on the Crimea and anti-Russian sanctions. Back in 2014, Zimbabwe was one of the few countries that supported Russia on the world stage. And just the day before the military coup, Zimbabwe again voted against the anti-Russian resolution on Crimea in the UN General Assembly.

Generally, the West has accumulated enough reasons and reasons for dissatisfaction with the leader of Zimbabwe, and, as you know, the West is not inclined to forgive its enemies. A “outraged” politician is sentenced to overthrow in one way or another.
Although formally, this coup looks like an internal affair of the country and even of an individual ruling party, the African National Union of Zimbabwe - The Patriotic Front (ZANU-PF).

A few days before what happened, on November 6, Mugabe fired the country's first vice president, Mnangagwa. This was the reason for the coup. The military accused Mugabe of wanting to make his spouse his successor, Grace Mugabe, who had trouble with Mnangagwa. However, Mugabe, despite his advanced age (93 of the year), never spoke of a successor.

On the night of November 14-15, Harare appeared Tanks. The next day, Mugabe, his wife, and the country's finance minister, Ignatius Chombo, were arrested. In addition, the military seized the building of the state television company ZBC, beating several journalists. A classic military coup? No, says Major General Sibusiso Moyo, this is not a coup, and the president is "not in danger."

November 15 Robert Mugabe managed to speak with President of the Republic of South Africa Jacob Zuma. He confirmed that he was under arrest in his own house. He managed to convince the military to allow Grace Mugabe to leave the country. Apparently, she went to Namibia.

Then it was reported that Mugabe himself fled the country, but this turned out to be untrue. Further contradictory messages followed - he allegedly declared his readiness to resign, then refused to leave the post, then he asked for "a few more days." In such an environment, it is difficult to distinguish truthful information from misinformation. According to the information at the moment (the morning of November 20), Mugabe flatly refused to resign.

Well, he is an experienced fighter, having served 10 years in prison for fighting colonialism. He is being blamed for the fact that he
"Brought a prosperous country" ... However, the truth is that before he came to power, Zimbabwe was British colony called Southern Rhodesia. Of course, there was no talk of any “prosperity”.

Now there are also allegations against him that he arranged for the so-called “black division”, for which the West imposed sanctions against the country. “Black redistribution” is land reform, which consisted in the fact that the land of white farmers was transferred to the black population. Kink? Of course. But you can’t talk about “black redistribution” and at the same time keep silent about the country's colonial past and crimes against its indigenous people. Otherwise it is a one-sided approach. However, this is precisely the approach the West has always been different. Do not think about their own, even such recent sins ...

UN Secretary General Antonio Guterres, commenting on the situation in Zimbabwe, on duty called for "calm, rejection of violence and restraint." It is easy to call for restraint a small African state. It is difficult to call for restraint, however, those who overthrow presidents around the world are “a big giraffe, he knows better” ...

Apparently, Mugabe has little chance of resisting. But the least of all now I want to rejoice at the overthrow of the so-called tyrant ... And simply - a person who fought against colonialism and in recent years - supported Russia.

But - what is happening is not much different from those color revolutions that swept almost the whole world.