Pistol Beretta APX left the army on the civilian market

November 22 2017
26
The recent competition for a new pistol for the US Army ended with the adoption of the Р320 pistol from Sig Sauer. One of the competitors of this weapons was the gun APX of the Italian arms company Beretta. After the weapon turned out to be “overboard”, the company did not close the project and since April 2017, this gun has appeared in the civilian market, and in a good configuration and at a relatively modest price.

The standard set of the new pistol includes the pistol itself, three magazines with a capacity of 17 rounds (10 rounds where the capacity of the magazine for civilian weapons is limited and 15 for the version of the weapon chambered for .40S & W), two rear grip covers that allow you to adapt the handle to different sizes hands of shooters. All this is packed in a plastic case of not the most presentable kind, but so that all this does not dangle, pieces of foam rubber are laid inside. 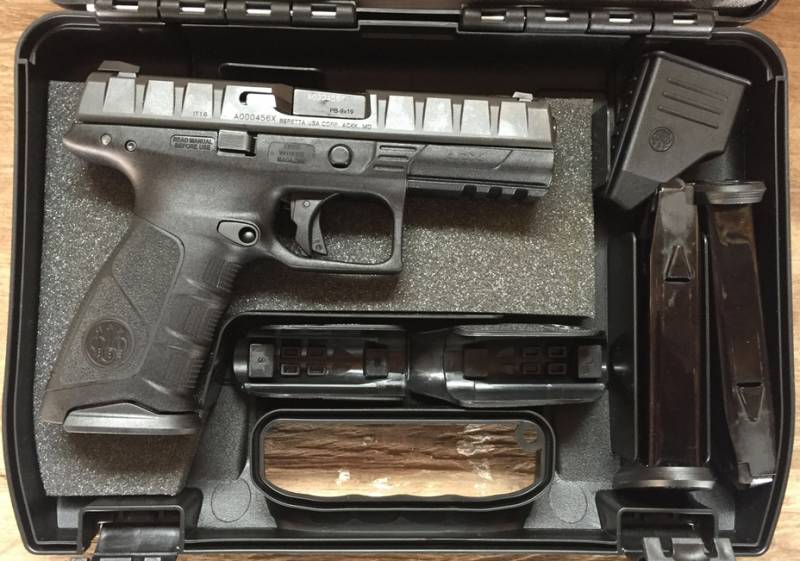 Obviously, the non-gift wrapping of this weapon is compensated by a reasonable price, as for the USA the recommended price is 525-575 dollars. By the way, Р320 is offered at a price of 450 dollars, but only two stores are included. Actually the low cost Р320 became its main trump card in the competition for a new gun for the US military. The weapon itself, service kits, holster, accessories and warranty repairs for each of the P320 pistols will cost the Ministry of Defense an average of 2000 dollars. But back to the Beretta APX.

The appearance of the gun Beretta APX and its ergonomics

The first thing that catches your eye when examining a pistol is its not quite ordinary shutter casing. Instead of notches in the front and rear of this part of the weapon along the entire length there are quite large protrusions. 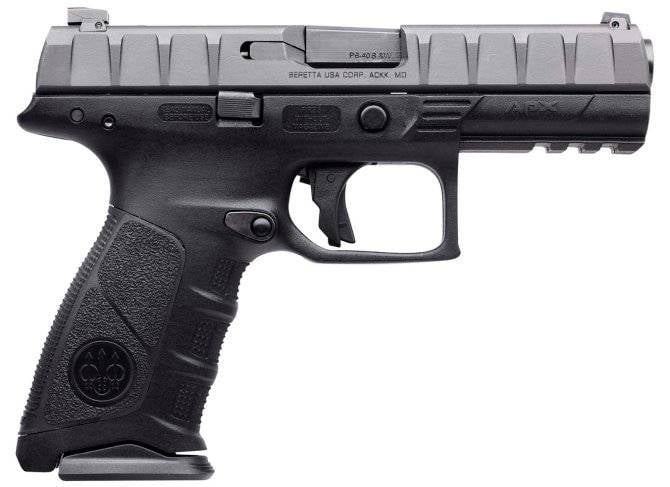 Such a decision has repeatedly shown its advantage over small notches where the winter season is really winter, with frost and snow, and where the hands of the shooter are protected with warm gloves. A considerable advantage of this form of housing-shutter will be in a situation where both the hands and the weapon itself are smeared with dirt or blood. In the end, with this form of casing-shutter, you can bring a pistol into combat readiness with just one hand, pressing the weapon to the body or holding it between the same knees, which will be useful if one of the hands is injured.

The disadvantage of such protrusions on the cover-shutter is usually considered to be that they will cling to the clothes when removing. But here it is necessary to clarify one moment. This gun was originally designed for the military, and the military does not have the habit of carrying a weapon in a pocket or under a belt, the gun is in a holster. In addition, even now, when this weapon has become a hundred percent civilian, its dimensions make wearing a holster more convenient. And, judging by the corners, the removal of such weapons from their pockets should not interfere with anything. But if you put your gun in your belt, fashionably, cinematically, in front or behind, you can show not only your level of culture of handling weapons, but you can also strip the skin on your stomach or lower back during extraction. 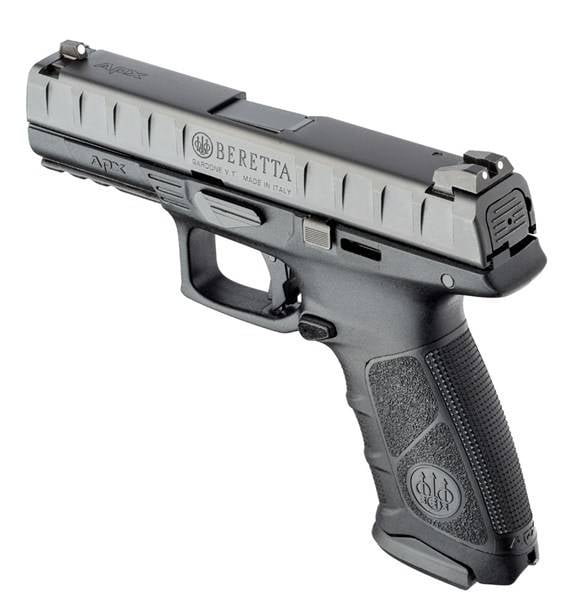 If we talk about the ease of use of weapons, which includes not only carrying, but also use, then one of the requirements in the competition for a new gun for the US Army was the ability to change the size of the handle of the weapon. This is already implemented in a standard way - in the form of linings on the back of the pistol grip. Anticipating the question of why in the standard set of interchangeable pads, you need to give a little explanation. The possibility of adjusting the dimensions of the pistol grip is determined not only by the size of the palm of the arrow. The weapon can be used both with bare hands, and then when the hands are protected with the same gloves, respectively, ideally, and the size of the handle should be different.

Another requirement in the competition was complete bilateralism of weapons. Since there is no fuse switch on the gun, only the shutter delay key was duplicated, and the button for removing the magazine can be moved to both the left and right sides of the gun. On the left side of the gun is a lever for disassembling weapons.

The sights of the pistol in its standard version are presented in the form of conventional rear sight and front sight. These elements are not one with the shutter casing and are mounted on the seats. That is, the sights can be easily changed to other, more convenient ones and even put a collimator sight instead of the rear sight. Additionally, in the plastic frame of the Beretta APX pistol under the barrel there is a seat for a small-sized flashlight or laser pointer.

The design of the gun Beretta APX

The basis for the new gun company Beretta chose automation with a short stroke of the weapon. Coupling the housing and bolt and the barrel is carried out by protrusion above the chamber, which enters the window for ejection of spent cartridges. In the process of movement of the barrel and the casing-bolt back, the chamber is reduced, leaving the clutch with the casing-gate. The reduction of the chamber is realized due to the interaction of the transversely inserted axis of the contactor and the cut-out in the tide under the chamber. In general, the scheme has long been run-in and it is hardly worth waiting for something new from it, with proper performance, it has proven to be reliable and reliable. 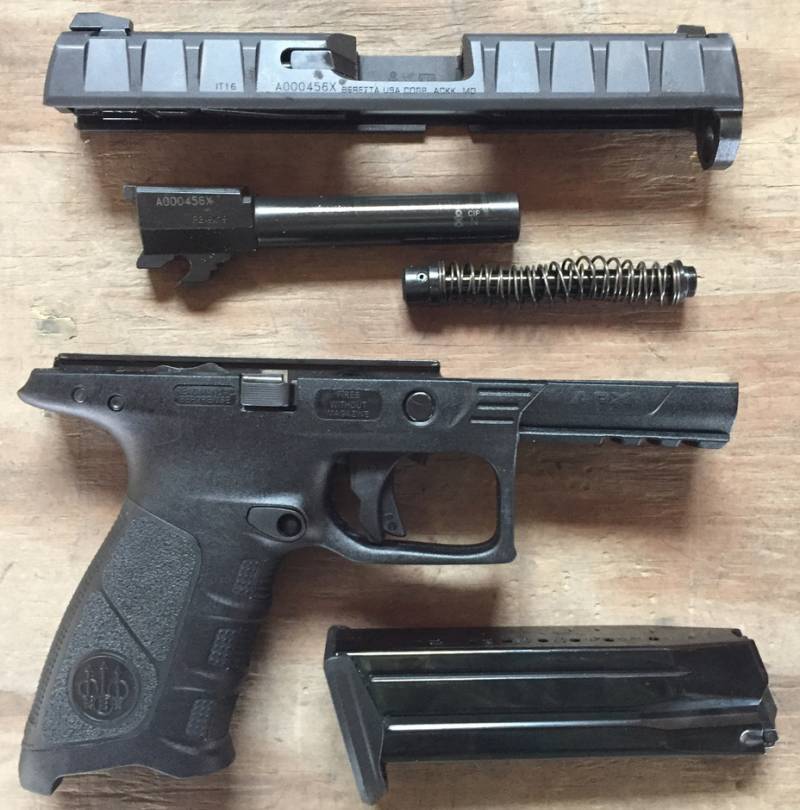 Shock trigger trigger with dovzvodom, back is already well-established. The weapon is quite safe, even with a cartridge in the chamber, security is ensured not only by the force of pressing the trigger, but also by the so-called automatic fuse in the form of an insert on the trigger. The force when the trigger is pressed is 2,8 kgf, the trigger stroke is about 6 millimeters.

By itself, the gun is assembled on a steel base, which is fixed in a plastic frame of the weapon with a pin in the back of the frame and additionally with an axis of the contactor.

An interesting detail in the design of this gun is a small button located on the right side next to the pin. This button is designed for the safe descent of a pistol drummer, which additionally ensures the safety of the handling of weapons. 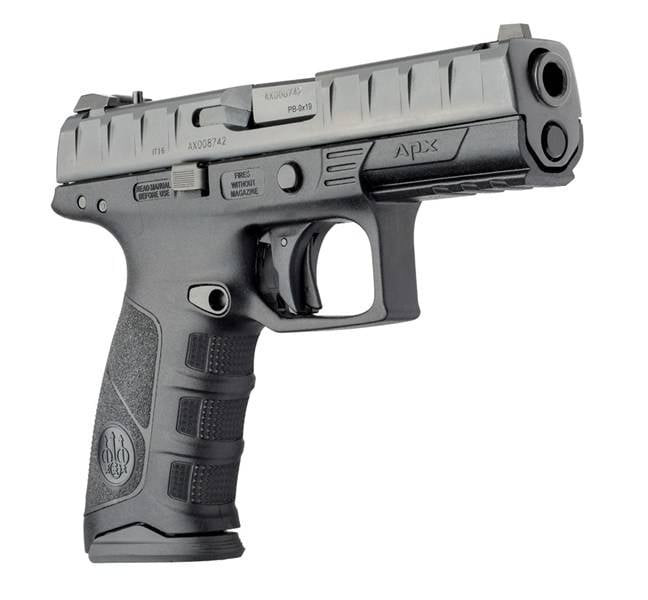 The plastic frame of the gun is impact resistant, not exposed to ultraviolet radiation. High and low temperatures within reasonable limits do not affect the strength of this element of the weapon.

It is not yet known whether the versions of the weapon with another trigger mechanism or another version of the casing-shutter, which switches off the automatic fuse switch, will be solved this issue will solve the demand for this weapon.

Characteristics of the gun Beretta APX

At the moment, the pistol is presented only for cartridges 9x19, .40S & W and 9x21, but in the near future there will be options for weapons for all common cartridges for pistols, including those for .357SIG. Depending on the ammunition, the mass and capacity of the magazine will change, and the dimensions may also change in some cases. In the meantime, you can give the characteristics only for the pistol variant for the above mentioned cartridges. 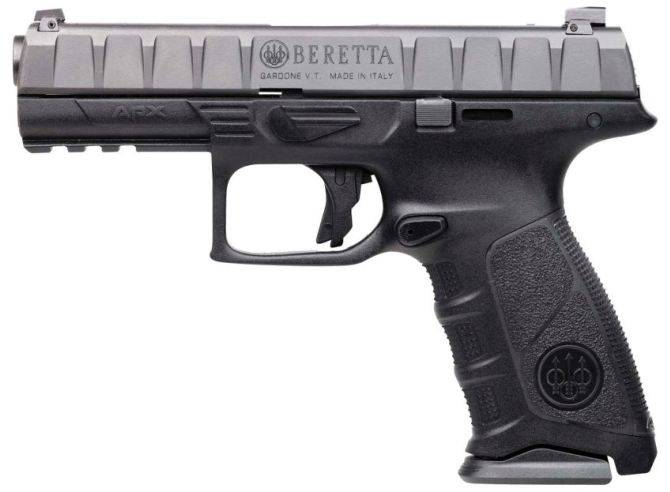 It is possible to characterize a new weapon from different sides, there appeared already as well as negative reviews, and enthusiastic positive ones. It is noteworthy that all the negative is reduced to individual details of the weapon in the form of the same protrusions on the casing-gate, which is somewhat strange, since the person saw the purchase, for which he gives money. Much more positive feedback, which separately notes the high reliability of the gun and the usual design for service.

In any case, you need to understand that the Beretta APX pistol was not designed as a sports weapon and not even a pistol for self-defense, it is an army weapon, and not the main one, which means reliability in it comes first, and only then accuracy.
Separately, it is worth noting that the Beretta APX pistol is the first pistol of the Italian company with a shock trigger mechanism with a dovzvod, and, as it turned out, not always the first pancake lump. Despite the fact that the weapon did not win the competition and did not become a pistol for the US Army, Beretta APX found its niche, although largely due to the name.

Despite the fact that the gun has a common design and many solutions used in it for more than one year, it’s still a big stretch to call this weapon an ordinary one, since ordinary samples do not participate in competitions for one of the largest armies in the world.