Russia's naval power in the Caspian

November 20 2017
11
November 15, 2017 marks the 295th anniversary of the creation of the Caspian Military flotilla - one of the oldest operational associations of the Russian fleet. The Caspian Flotilla is a marine component of the Southern Military District. Currently, the Caspian Flotilla is the most powerful naval association in the Caspian, where it ensures the observance of the national state interests of the Russian Federation. The flotilla takes part in anti-terrorism measures, protecting state interests in the oil field zone, and protecting trade. It includes several brigades and divisions of surface ships and parts of coastal troops. Since September 2016, Rear Admiral Sergey Pinchuk has been commanding the flotilla.


The first attempt to create a flotilla of warships in the Caspian Sea was undertaken in Russia in the 17th century during the reign of Alexei Mikhailovich. This was due to the expansion of trade relations between Russia and Persia and the need to ensure the protection of trade in the region. 14 November 1667 of the year in the village of Dedinovo at the confluence of the Oka and Moscow rivers was laid down the first Russian three-mast warship "Eagle". At the same time, a yacht, a boat and two boats were built here. The built ships were launched in the 1669 year and successfully arrived in Astrakhan, but as early as the following year, during the uprising led by Stepan Razin, these ships were captured and later burned.

The second time, Peter I returned to the creation of a military flotilla in the Caspian, it happened after the end of the Northern War with Sweden. Launched in the summer of 1722, the Persian campaign demonstrated the need for a permanent Russian fleet in the Caspian. Peter I’s stay in Astrakhan and the Persian campaign changed their attitude to the Caspian fleet. Already 4 in November (15 in November in a new style) 1722 of the year, a military port was founded in Astrakhan by the decree of Peter I and the military flotilla was formed, this date is considered the day of the founding of the Caspian flotilla . 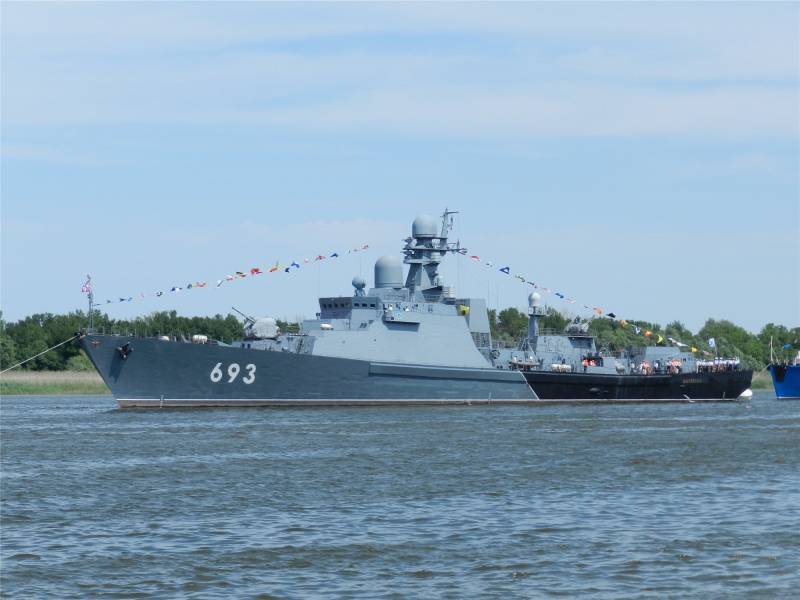 Flagship of the Caspian Flotilla of the Republic of Kazakhstan "Dagestan" of the project 11661К
Since then, the Caspian flotilla has come a long way, but its main base today is still Astrakhan, its bases are also Makhachkala and Kaspiysk in Dagestan and the village of Nikolskoye and Trudfront in the Astrakhan region. The flotilla includes patrol ships of the near-sea zone (2), small warships (8), fighting boats (6), landing boats (8), minesweepers (7), only about 70 combat and auxiliary vessels. The coastal forces of the flotilla are represented by the 727-m separate battalion of marines (Astrakhan), the 414-m separate battalion of marines (Kaspiysk) and the 847-m separate coastal missile battalion (Kaspiysk), armed with the coastal missile complex "Ball".

In 2017, on the basis of the detachment of anti-sabotage forces and equipment (PDSS) of the Caspian flotilla, the formation of a new special-purpose squad began. The new unit is being created within the framework of the development of the Russian Navy, such detachments have already been created as part of the Black Sea and Pacific Fleets. Coastal Special Forces will receive Raptor-type speed patrol boats, which are capable of carrying paratroopers to 20, and Tachyon small unmanned aerial vehicles.

Over the past three years, the combat strength of the Caspian Flotilla has been seriously updated, with 18 new ships and auxiliary fleet vessels being adopted. In particular, three new small rocket ships of the 21631 “Buyan-M” project: “Grad Sviyazhsk”, “Uglich” and “Velikiy Ustyug” armed with the Kaliber universal missile system, as well as two amphibious assault boats of the 11770 type “ Chamois". Also in 2017, two new raid tugs were accepted into the Caspian flotilla: RB-410 (built by 705B project by the Astrakhan branch of the Zvezdochka repair plant) and RB-937 (90600 project, built at St. Petersburg "Pella"). Also in 2017, the flotilla received and installed a newest training complex for training military rescuers and divers, it is located at the flotilla base in Kaspiysk. 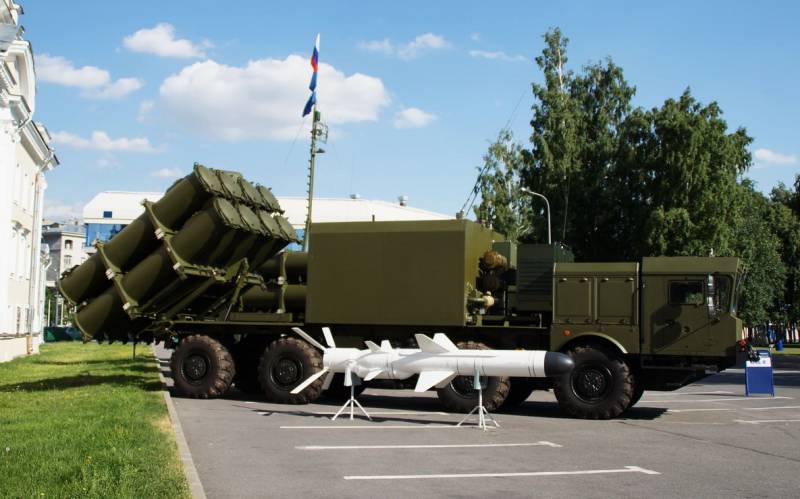 Coastal missile complex "Ball"
It is planned that in the near future the composition of the Caspian flotilla will also be added to the new amphibious assault boats of the Murena 12061 air cushion project. In addition to warships, the auxiliary fleet is being updated. In accordance with the concept of its development, the Russian shipyards of the Caspian Flotilla supplied 7 boats of integrated emergency and rescue support, three road tugs, two modular rescue tug vessels and a floating crane vessel. According to the Russian Navy Commander Vladimir Korolev, by the year 2020 the Caspian flotilla will be equipped with the latest 76 percent with the latest weapons and military equipment. At the same time, at the beginning of 2016, the share of new ships and boats as part of the flotilla was brought to 85 percent, the press service of the Russian Defense Ministry reported.

Also in 2017, at the Adanyk training ground located in Dagestan, work began on the construction of new facilities intended for training the marine units of the Caspian Flotilla. The total area of ​​the updated landfill will be about 40 square kilometers. The site is scheduled to be completed at the end of 2019. By this time, it is planned to complete the first stage of construction and modernization of new locations for the flotilla ships (in particular, the berthing front and various ground facilities in Kaspiysk).

The flagship of the Caspian flotilla from 2017 of the year is the Dagestan rocket ship, built according to the design of the patrol ship of the 11661K project (the cipher Gepard, according to the NATO classification, the ship belongs to corvettes). Ships of this type are equipped with powerful artillery, anti-ship, anti-aircraft and anti-submarine weapons. These are fairly large warships with a displacement of about 2000 tons and a length of more than 102 meters, draft - 4,5 meters. Maximum speed of 28 knots. The crew is about 100 people, the autonomy of navigation is 15-20 days. 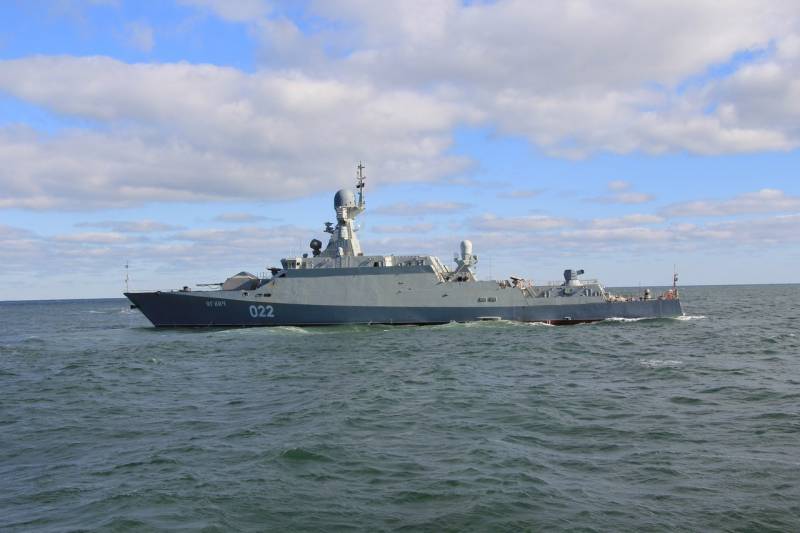 MRK "Uglich" project 21631 "Buyan-M"
It was the rocket ship Dagestan that became the first ship in the Russian Navy armed with the Caliber-NK universal missile complex (according to the NATO codification SS-N-27 "Sizzler"), which includes several types of high-precision cruise missiles. These cruise missiles can be effectively used against both coastal and surface targets. There are 8 vertical launchers for Caliber missiles in the bow of the ship.

The Dagestan rocket ship and the Grad Sviyazhsk, Veliky Ustyug and Uglich small rocket ships built according to the Buyan-M 21631 project are today the main striking force of the Caspian flotilla, which significantly increased its combat capabilities. Ships of the 21631 “Buyan-M” project are multi-purpose rocket and artillery ships of a small displacement of the near sea zone. Full displacement - 949 tons, length - 74 meters, draft - 2,6 meters. Maximum travel speed - 25 knots. Crew - 25-36 people, autonomy swimming - 10 day. Despite half the displacement compared to the 11661K patrol ships, these warships carry the exact same set of Caliber cruise missiles (8 vertical launchers) as the flagship of the Caspian Flotilla of the RK Dagestan.

It is worth noting that it was from the Caspian Sea 7 of October 2015 that the Caliber cruise missiles were used for the first time against terrorists in Syria, they were launched from the Dagestan RC and the MRC Grad Sviyazhsk, Uglich and Veliky Ustyug . Total ships of the Caspian flotilla made 26 rocket launches on 11 targets in Syria, located at a distance of approximately 1500 kilometers. According to the Ministry of Defense of Russia, all the infrastructure of the militants, which were hit by “Calibri”, were destroyed. 20 November 2015 of the year the ships of the Caspian Flotilla executed another 18 caliber missile launches at 7 targets of terrorists in Syria. At the same time, Vice-Admiral Viktor Bursuk noted that even the experts were not able to predict the high efficiency of these missiles, and foreign military experts called the naval base in Kaspiysk “a pool with Caliber.” 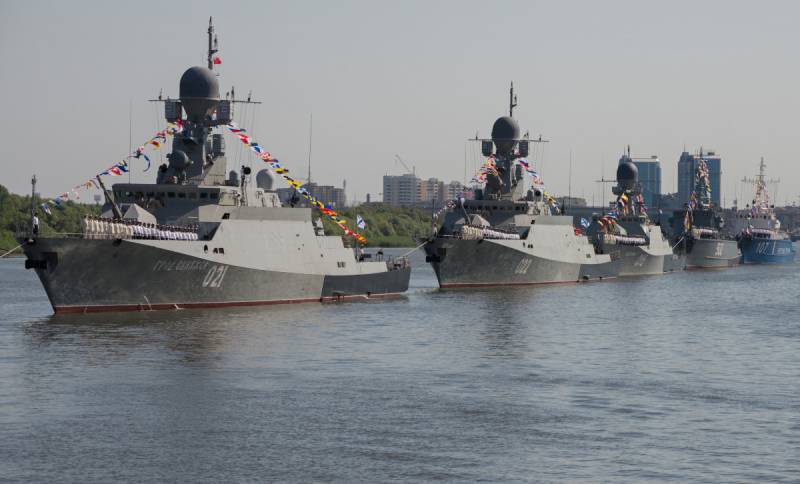 The Caspian flotilla approached its 295 anniversary with high rates in combat training. Only in 2017, the warships of the flotilla conducted 400 exercises using rocket and artillery weapons for sea, coastal and air targets. In particular, the flotilla ships conducted missile firing of cruise missiles, including precision-guided weapons - The Caliber missile system, more than 200 artillery firing, more than 40 mine exercises and practical mine settings, was also performed around 160 anti-sabotage exercises.

Currently, the Caspian flotilla is still a powerful, combat-ready naval association, which is not only Russia's southern outpost, but also a guarantee of the inviolability of the country's sea borders in this region and a very important tool of Russia's foreign policy in the Caspian Sea.

Ctrl Enter
Noticed oshЫbku Highlight text and press. Ctrl + Enter
We are
Caspian Flotilla of the Russian Navy celebrates its 295 anniversaryNew ships and missiles: the shock power of the Caspian flotilla
Military Reviewin Yandex News
Military Reviewin Google News
11 comments
Information
Dear reader, to leave comments on the publication, you must sign in.