November 21 2017
7
Sometimes ideas armory designers are far ahead of their time. Less often, but even this happens, some one idea gives a good impetus to the development of all weapons as a whole, with a revision of its classes and roles on the battlefield. And sometimes it turns out well, a very controversial design, the advantages of which are completely covered by the shortcomings that have appeared. In this article, we will try to get acquainted with such a weapon model as the M3 Glock 19, which is a folding pistol. 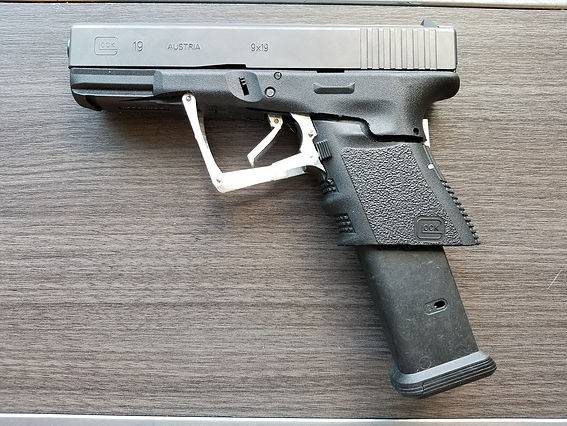 In general, the material on this weapon could be written in two paragraphs, with the first paragraph consisting of one sentence: “By design, the gun is almost identical to the Glock 19”, and the second one could describe all the flaws of the emerging structure in this implementation. With Glock in all its variations, if not all, then many are familiar, and once again repeat the design features of this weapon makes little sense. However, a more detailed study of the design, which makes the weapon collapsible, resembles another sample of weapons of a different class and from another weapon company - the Magpul FMG-9 submachine gun, which was developed on the basis of Glock 18.

This weapon was really very interesting and at the same time simple in its design. A person who does not know about the existence of this submachine gun could, with an absolute guarantee, take him for a flashlight with a large battery. However, this sample turned into a full-fledged submachine gun with a butt after pressing just one button. And if the cartridge was in the chamber, then after pressing the button it took less than a second before the start of firing. 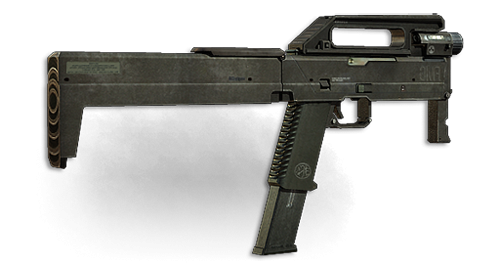 The submachine gun itself consisted directly of the pistol with an elongated barrel and the “package”, which was split into two halves. The lower part, in the unfolded position, served as a full-fledged butt, while the upper part worked as a kind of forearm, so to speak, in this situation. A carrying handle was fixed on it, on which a rear sight and a front sight were placed, and a small flashlight was placed in front of the handle. The inclusion of a flashlight and a button to bring the weapon into combat readiness was available for pressing with a holding hand. If desired, the flashlight could be removed by replacing it with a laser designator, leaving it completely empty. 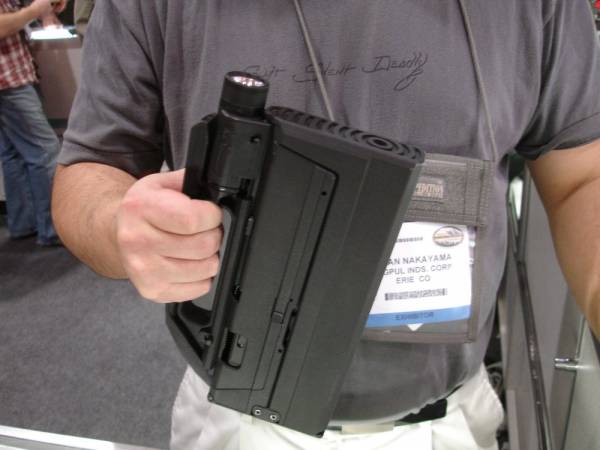 The weapon controls were quite ordinary, the only thing that deserves special attention is the cocking handle. This detail was a separate, unrelated to the shutter casing element, respectively, when firing the handle remained stationary. It could be installed both on the right and on the left side of the submachine gun. It did not require a tool or PP disassembly, it was enough to pull out a small part and move it to the other side of the weapon.

Unfortunately, some design flaws, such as the complex elimination of delays during firing and the low strength of plastic parts, combined with not the greatest interest in this weapon, did not allow this particular submachine gun to enter the series. However, due to the unusual appearance, he caught on in a number of video games, and from there he moved to reality in the form of airsoft weapons.

Despite the general similarity of the folding mechanism, information that the Glock 3 M19 is based on FMG-9 was not found, although everything is quite obvious. 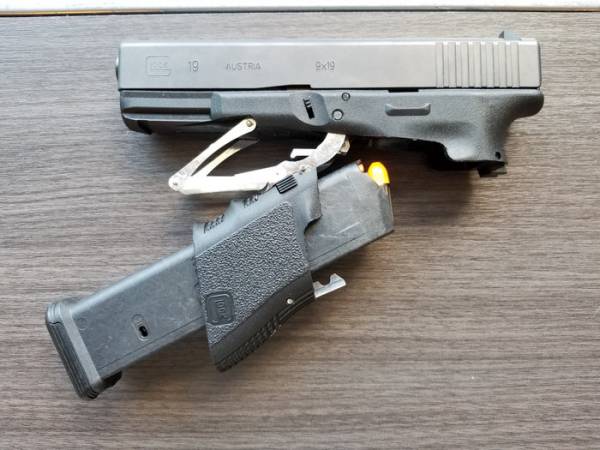 In addition to the inability to conduct automatic fire, the M3 pistol differs from its progenitor by the manual mechanism for bringing the weapon into combat readiness. Other details are different. So the safety bracket is made of metal, and the hold handle has become shorter. The principle of work remained the same, but a number of shortcomings appeared.

One of the main drawbacks of the M3 pistol design is that the trigger mechanism is now completely open to contamination when the weapon is in the folded position. In general, the folding design implies the possibility of carrying weapons in the same pocket, or in a small compartment of the bag, that is, in those places where dirt, threads, small objects that may interfere with the operation of the pistol can accumulate. This means that in order for the weapon to retain its performance guaranteed, it will be necessary to carry it in some special fully closed holster or case, which completely removes all the advantages of the very idea of ​​a folding gun.

Another disadvantage of the weapon was his handle, on which all the fingers of the hand holding could not be placed. In principle, this task is handled by a long weapon store, and when you change a store, you can aristocraticly protrude the little finger. 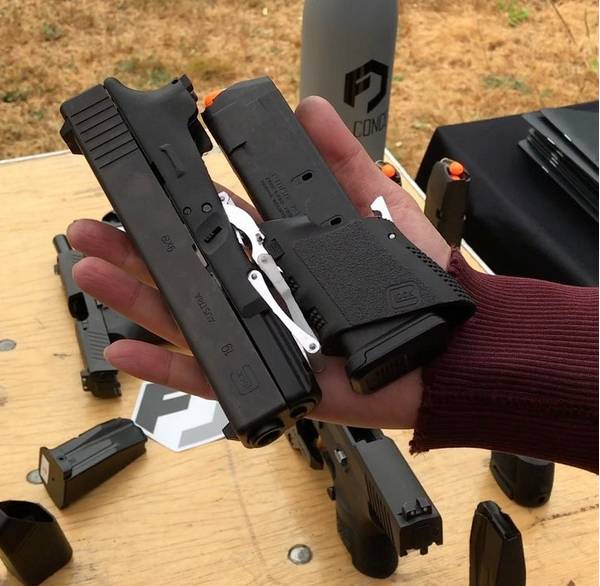 The M3 Glock 19 pistol turned out to be a very strange weapon. On the one hand, it is compact when worn, while maintaining the full capacity of the store and the length of the trunk. On the other hand, this compactness is realized by reducing the reliability and ease of operation of the weapon.

Since November of this year, the gun is available for sale in the United States. It is noteworthy that many are against the emergence of these weapons in the civilian market, motivating the possibility of hidden wearing, forgetting that there are a lot of very compact models that are much smaller in size than the M3 in the folded position, and most importantly, more reliable.