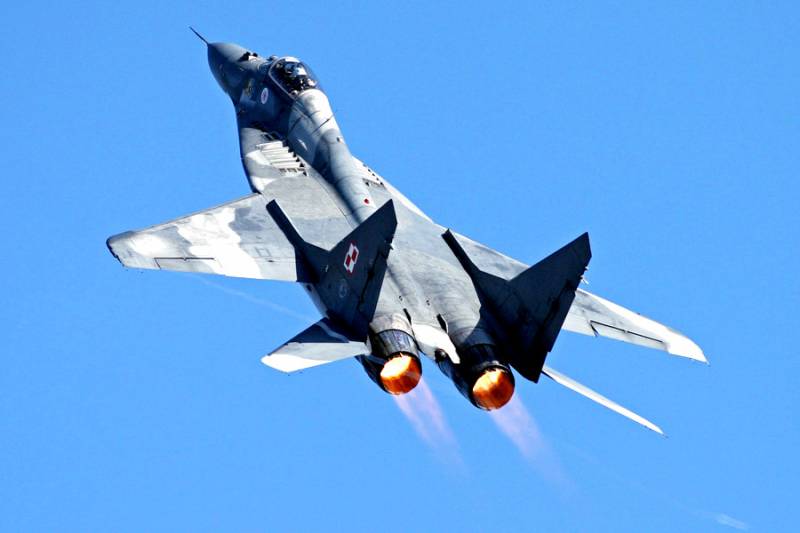 Most of the air forces of the Warsaw Pact member countries were very closely acquainted with the unique airborne technical and, therefore, combat capabilities of the advanced twin-engine 4-generation fighters of the MiG-29А ("9-12Б"), which began to enter service 1 th squadron of the Warsaw Fighter Wing Regiment at the end of July 1989. Even despite the fact that the machines were equipped with a simplified export version of the weapon control system VCS-29E having the current restrictions on the range of radar N019 "Sapphire-29» (about 55 km target with EPR 3m2 in the forward hemisphere and 30 km - in the rear hemisphere) , as well as medium-range air combat missiles Р-27Р1 / Т2 with underestimated range characteristics, the original aerodynamic airframe of the airframe allowed melee air combat to win from any Western European and shtatovskogo fighter (from "Mirage-2000C / -5" to F-16A). In particular, the angular speed of the steady pitch reversal is for the MiG-29 about 23,5 degrees / s, which is comparable only with the newest multi-purpose fighter "Rafale".

"Falkruma" remained in service with the Polish Air Force even though 15 September 2006, the most Russophobic Eastern European country, began to take some of the most modern tactical fighters into combat units - the F-16C / D Block 52, which later received the addition of "+" , and this already says a lot. After all, firstly, MiG-XNUMHA in close air combat (“dog dump”) can still be fought with “Rafalee” and with “Typhoon”; secondly, they have a unique modernization reserve in terms of onboard electronic equipment, which the Poles intend to implement in the hardware in the near future. For example, a Polish source militarium.net, citing various state resources, reports that in Warsaw they are thinking about the implementation of the 29 stage of the improvement of the Soviet MiGs.

The third stage should become the crown of engineering of the Polish aircraft repair company Wojskowe Zaklady Lotnicze. It provides for the installation on the improved “Products 9-12B” of more advanced multi-mode airborne radars of the AN / APG-68 family of version (V) 9, as well as the unification with AIM-120C-5/7 medium-range air combat missiles and AIM- 9X Block II "Sidewinder". Due to this update phase, the Poles plan to establish parity with our MiG-35s, which should go to combat units from 2018, as well as with the Baltic fleet Russian Navy Su-30SM. But let's look at this perspective more objectively. Even if the WZL-2 specialists, with the help of Northrop Grumman employees, manage to “cram” a rather large (0,48 x 0,72 m) oval antenna array of the AN / APG-68 (V) radar 9 into the MiG-29A radio-transparent fairing, designed for the 700 mm H019 Sapphire-29 radar, they are unlikely to gain a confident superiority over the promising MiG-35S and Su-30SM.

Firstly, AN / APG-68 (V) 9 is able to detect a target with an 2 2 EPR at a distance of no more than 90 km, while the Zhuk-AE and H35M Bars radars mounted on the MiG-30 and Su-011M are installed "They will charge the" Pole "at a distance of 140 - 170 km. In fact, Russian pilots will be able to “capture” the Polish MiG-29A for accurate auto tracking at 2 times the greater distance. Moreover, ours will have an advantage in terms of noise immunity, bandwidth and target channel, as the above radars are built on the basis of active phased array (“Zhuk-AE”) and passive phased array “Bars” (8 and 4 of fired targets, respectively. In -second, when operating in the passive mode, our MiG-35 will receive indisputable advantages provided by the presence of an attacking missile detection station provided by high-resolution sensors of the upper hemisphere (VS-OAR) and the lower hemisphere (NS-OAR). Optical-electronic data Uli can detect the silhouette of a MIM-104C / ERINT SAM at a distance of 30 — 40 km and AIM-120C — 25 — 30 km. In Polish cars, such a product is not expected in the future.

Also, in addition to the nose optical-electronic sighting system OLS-UEM, the MiG-35 has a similar turret module of the lower hemisphere OLS-K, designed to work mainly on ground targets (targets like "tank" - 20 — 30 km, PU OTRK - 40 —50 km, destroyer — 65 — 80 km) in the television and infrared channels with the possibility of laser targeting. Polish “WZL-2” for this will need to hang on fairly “tacky” glider “Falkruma” separate container OLPK type “Sniper-ATP”, etc., that will make the car heavier, will increase the load on the wing and will not allow maneuvering close combat . Moreover, the modification of the MiG-35 for the Russian VKS can receive the RDDF with a deflecting thrust vector RD-33МК2, which will turn the transitional generation Falkrum into a super-maneuverable air fighter, similar to Su-30CM and Su-35С. In this case, the Poles finally drop out of the game.