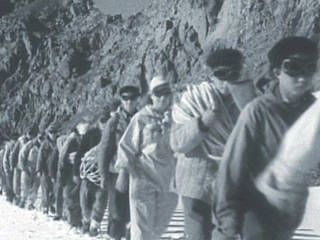 By the summer of 1942, German troops reached the foothills of the Main Caucasus Range. The rangers of the Edelweiss divisions, through the passes, burst into the Transcaucasus. Here, in the mountains, among glaciers, rocks and gorges, events developed with particular drama. And their main characters were the Soviet mountain arrows.

In the past, there were joint German-Soviet ascents of mountain climbing athletes in the Caucasus Mountains, which allowed the German command to have maps of mountain ranges and roads. And if every Wehrmacht mountain rifleman underwent a thorough training, the Soviet Union met the war with units that were mountain riflemen only in name.

21 August 1942, the German climbers on Elbrus hoisted the Nazi flags. The Red Army urgently began to create military training centers for mountain training, where most of the time was devoted to special mountaineering training. They mastered the skills of movement in the mountains, the fighters learned the subtleties of overcoming mountain rivers. Soldiers were taught to ski on the slopes, make dashes in chains, and fire from any position. Special attention was paid to arms shooters. One of them, a mortar, is irreplaceable in the conditions of mountains.

1943 year. The troops of the South-Western and Southern fronts, crowding the enemy, put the entire German Army Group "A" at risk of encirclement. The headquarters ordered the commander of the Transcaucasian Front to prepare an offensive. Fights for passes began. A separate detachment of Soviet mountaineers was assigned to set the state flag of the Soviet Union on Elbrus.

A separate part of the series is devoted to medals that were awarded to soldiers who participated in the many days of defense of large cities: Leningrad, Odessa, Sevastopol, Stalingrad and others.