The meeting of the foreign ministers of Turkey, Russia and Iran on the Syrian settlement was completed in Antalya

November 19 2017
30
The foreign ministers of Russia, Iran and Turkey during the talks held in Antalya on Sunday agreed on all key issues, reports RIA News the message of the head of the Russian Foreign Ministry Sergey Lavrov. 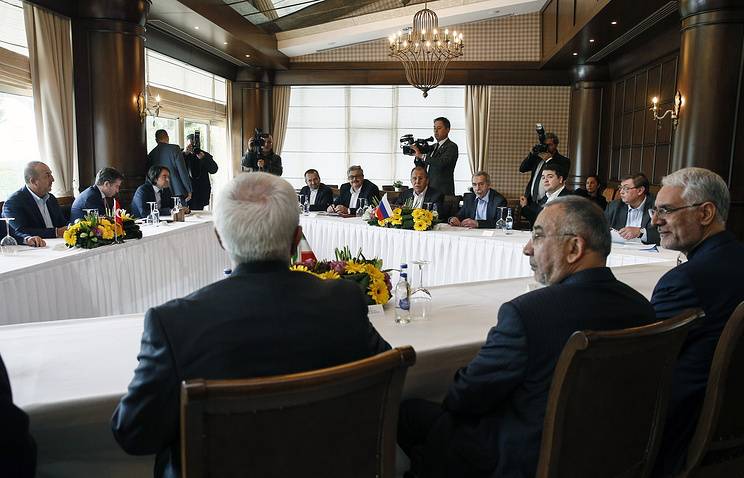 We have gathered to discuss specific questions about the preparation of the summit of the presidents of the three countries, which will be held on November 22 in Sochi. The work was very useful, we agreed on all key issues
Lavrov told reporters.

We will report to our presidents our assessments of how to proceed, how to strengthen the process called Astana process and which should create the most favorable conditions for the Geneva process to finally acquire some effective tools for solving the tasks set in UN Security Council resolution 2254 ,
He stressed.

The minister also said that the heads of the General Staff on the eve of the summit in Sochi will hold a meeting at which they will discuss the details of the work of de-escalation zones in Syria.

In preparation for military training for the November 22 summit in Sochi, the heads of the General Headquarters of the three countries - Russia, Turkey and Iran - will also hold their meeting,
said Lavrov.

According to him, the military of the three countries "are in constant contact on the functioning of all four de-escalation zones in Syria," and are also working to create a fifth zone.

All questions were discussed. I can not go into details. Our recommendations will be reported to the heads of state, they will make decisions on all proposals that will be made,
added the head of the Russian Foreign Ministry.