November 19 2017
79
Leaders of the United States and France, Donald Trump and Emmanuel Macron discussed the situation in Lebanon and Syria and promised together with the allies to fight Iran and the Shiite Hezbollah movement, reports RIA News Post press service of the White House. 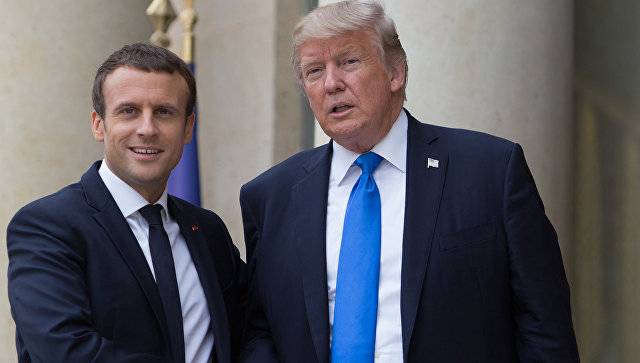 President Donald Trump spoke today with French President Emmanuel Macron about the situation in Lebanon and Syria. Both presidents agreed to work with the allies to counter the destabilizing activities of Hezbollah and Iran in the region,
says release.

Recall, on Saturday, Macron met in Paris with Lebanese Prime Minister Saad Hariri, who announced his resignation. The Prime Minister announced this on November 4, while in Riyadh. Speaking on Saudi television, he accused Hezbollah and Iran of inciting hatred in Lebanon and the Arab world, and also reported on the attempted assassination.

In turn, the leader of the Hezbollah movement, Hassan Nasrallah, stated that the reasons for Hariri’s resignation should be sought in Saudi Arabia, while the Iranian Foreign Ministry called the accusations by Hariri unfounded.

According to Nasrullah, Riyadh forced Hariri to resign and, possibly, keeps him in Saudi Arabia by force.

Ctrl Enter
Noticed oshЫbku Highlight text and press. Ctrl + Enter
We are
Macron was going to hike ...On kisses Merkel in Hamburg Macron responded with a claim to Germany
79 comments
Information
Dear reader, to leave comments on the publication, you must to register.