On war as war: what will be the asymmetrical response of Russia to new American sanctions? 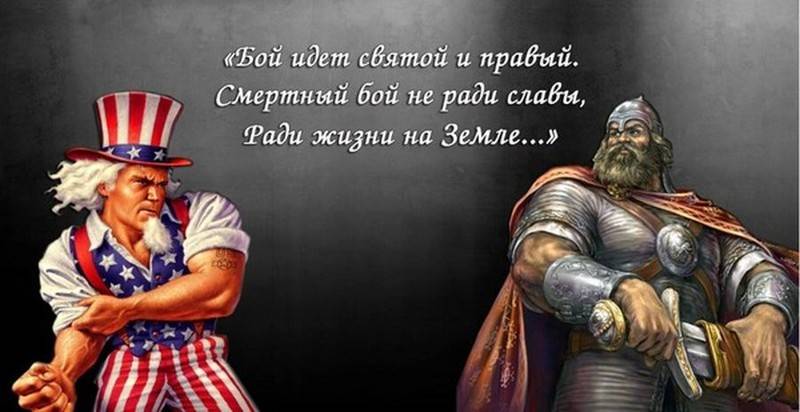 After 29, January 2018 will take effect a new package of anti-Russian sanctions from the United States, which could have disastrous consequences for our economy. Strict restrictions are directed, first of all, against the energy and financial sector, which will extremely painfully affect the implementation of promising oil and gas projects.

The US State Department put a number of conditions in place to lift these sanctions: renunciation of the Crimea, implementation of the Minsk Agreements and termination of illegal cyber interference. In essence, they want to deprive us of sovereignty and territorial integrity, and in fact recognize the surrender.

Now the most important. What answer can Russia give to the overwhelming politicians from Washington? Many experts and political scientists suggest that we take the so-called Ukrainian path. Namely: to prohibit the supply of titanium for Boeing, the RD 180 rocket engines for Atlas and, as they say, further down the list.

But the scale of such a response is absolutely incomparable with the actions of US sanctions, not to mention the fact that it would cause serious damage to domestic producers. Therefore, in order to cool the hot heads overseas, you need a hard, non-specular and, if you like, inadequate response.

I mean a whole range of activities that will force America to roll back its widely publicized sanctions. So, in order.
1) It is urgent to get rid of US federal loan bonds, in which today we have invested 103,9 billion dollars. Part of the funds can be spent on the purchase of gold, the other part is directed to the creation of a Russian investment bank. Due to Western sanctions, our economy is in dire need of cheap loans for long periods. We kill two birds with one stone: we will stimulate production growth and at the same time deal a heavy reputational blow to the US financial system.
2) Already no one doubts the fact that the Minsk process ordered everyone to live long. It is necessary, in the end, recognize LDNR. At the same time, there should be a leak in the media that Russia plans to create two military bases on the territory of the republics.
3) Without waiting for the entry into force of US sanctions, begin negotiations with the governments of Cuba and Venezuela to establish military bases there.
4) If the US does go to the implementation of the so-called "secondary" sanctions, which provide for tough measures against third countries for cooperation with Russia, that is, try to push us into a corner, then our country can decide on more radical steps. For example, to withdraw from the regime of sanctions against the DPRK and sharply strengthen trade and economic, and possibly military cooperation. The fact is that the ruling circles in Washington will never dare to launch a “hot” war against North Korea, so that Donald Trump will not declare there. Millions of victims in 21 - th century, no one needs. In fact, they expect to choke her economically with the help of Russia and China, but without our support, the Americans will remain, as they say, with nothing.

We all understand that the United States respects only force. That is why Russia should give them a hard, painful and asymmetrical response.

Ctrl Enter
Noticed oshЫbku Highlight text and press. Ctrl + Enter
We are
A great interview with Sergey Lavrov: about Ukraine, Obama and IranMilitary reform as an integral part of the security concept of the Russian Federation: Systematic dynamic assessment
Military Reviewin Yandex News
Military Reviewin Google News
160 comments
Information
Dear reader, to leave comments on the publication, you must to register.