US fails another exam in the Middle East 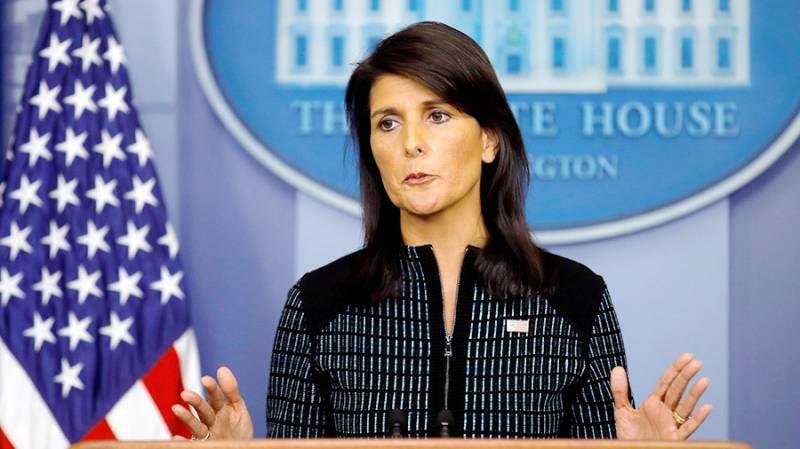 The fight against terrorism in Syria is in its final stages. In the near future, the settlement of the conflict can continue at the negotiating table, at which each participant has a purpose to take a convenient place. The latest confirmation of this is the spreading by Washington of the problems of the Syrian Arab Republic (SAR) within the walls of the United Nations.

On the eve, Moscow did not extend the mandate of the UN-OPCW mission to investigate the use of chemical weapons in Syria. According to Russian representatives at the UN, the latest report of the Special Investigation Mechanism (IDA) "is based primarily on assumptions and selective use of facts."

During the two years of the commission’s existence, Russia has repeatedly questioned the effectiveness of its work. One of the main reasons for the criticism of IDA was the investigation of the incident with the use of sarin in the city of Khan-Sheikhoun (Idlib province).

The organization imputes the blame for the chemical provocation to the Syrian leadership, however, no intelligible confirmation has so far been submitted. Having confined to unsubstantiated accusations against Damascus, the experts did not take a single sample from the Syrian Shairat air base, from which, allegedly, a blow was struck. In turn, it should be noted that in the current situation, the western elites and individual neighbors of Syria turned out to be the beneficiaries, using the “chemical excuse” to discredit the current President Bashar al-Assad.

As expected, the decision of Moscow to suspend the work of the commission met with an unambiguous reaction from the “partners”. The United States Plenipotentiary to the UN, Nikki Haley, concluded that Russia had “killed” the RMC, while assuring that the topic of chemical weapons in Syria would not be left by Washington. Obviously, the statement of Mrs. Hayley is a very loud statement, since this is not about the murder of the engaged instrument of the West, but about a ban on the continuation of its activities under the auspices of the UN.

Be that as it may, wondering what caused the US desire now to begin an active discussion of the “chemical theme”, several arguments arise.

It seems that the first thing to emphasize is the creation of the “necessary” information background.
In addition to the south-east of Syria, where government forces are engaged in clashes with the terrorist group ISIL, there are still several hotbeds of tension in the country, the largest of which is located in the province of Idlib. Earlier on the official website of the US State Department appeared a brochure in which US citizens are not recommended to visit Syria, while one of the main reasons is the risk of the use of chemical terrorists by terrorists. weapons. Idlib in a published document of the US Foreign Ministry is an area of ​​heightened danger, which, apparently, is not accidental. 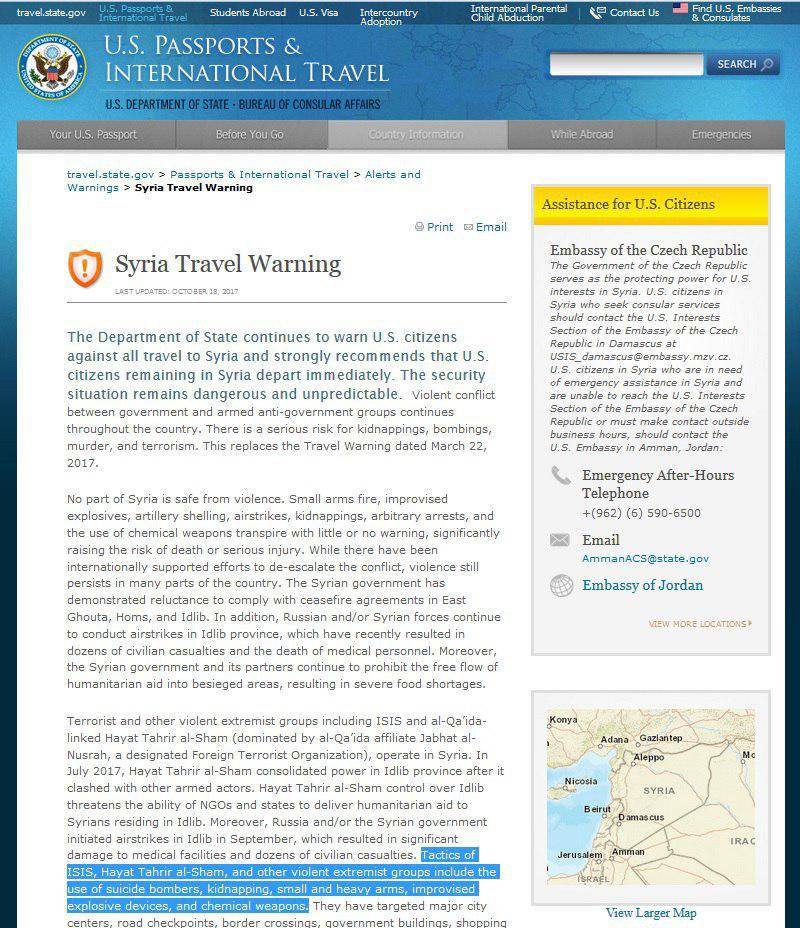 Recall that in the 2013-2014 year, during the implementation of the plan for the elimination of chemicals in Syria, it was reported that part of the weapon fell into the hands of militants. Given that the information on the presence of poisonous substances in the radicals “Dzhebhat en-Nusra (most of the illegal armed groups are now in Idlib) appears on the network regularly, we can assume that US intelligence has more complete information.

Returning to the question of the creation by Washington of the “necessary” information background, in the Idlib area there is a high probability of the start of active hostilities between terrorists and the SAR army. It seems that the West prepares itself and the public for the scenario in advance, when a certain party allows itself to use “chemistry”, and it becomes necessary to blame the other participant.

In addition, it cannot be dismissed that the principled position of the United States with respect to the current Syrian leadership and Russia's position on the settlement issue in Syria is an attempt to occupy an exceptional position in the post-war negotiations on the SAR. Probably, the guarantor of world security, for whom the Syrian project can be called yet another failure in the Middle East, continues to entertain the illusions that the war has not yet been lost for it.

Nevertheless, the exam in political chemistry is completed, the next time the announcement of the results. Looks like a deuce again!

Ctrl Enter
Noticed oshЫbku Highlight text and press. Ctrl + Enter
We are
Chemical fake in IdlibExam for the people
11 comments
Information
Dear reader, to leave comments on the publication, you must to register.