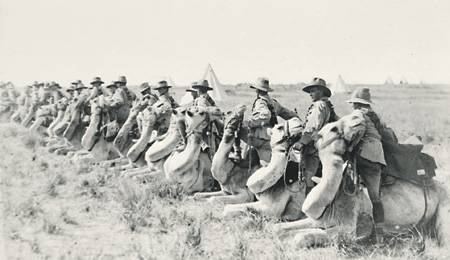 Looking at the modern map of the Middle East, we can distinguish four events of a century ago:


- Sykes-Pico Agreement of 16 of May of 1916 of the year, which delimited the areas of interest in the Middle East after the First World War;

- anti-Turkish uprising in Arabia in the summer of 1916;

- fighting in the Sinai, Mesopotamian and Caucasian fronts;

- Balfour Declaration 1917 of the Year - an official letter, dated 2 of November, about the creation in Palestine of a national home for the Jewish people.

The events of those years are in the memory of many nations. The boundaries established after the “Great War” are still not settled in many places. Monuments and cemeteries are reminiscent of the horrors of war. And now in the Middle East there is no peace under the olives.

The First World War (1914 – 1918) went through the Middle East and the Holy Land - from the Suez Canal to the Tigris and Euphrates. The British Empire fought against the Turkish Empire, which was supported by Germany. The Russian Empire fought on the Caucasian front. At the end of the last century, the author of these lines had to walk through the places, tracks and roads of the First World War in the Middle East - from the Suez Canal to Jerusalem, Damascus, Beirut and Baghdad. It seems to me that I am still there.

We present the victorious military summaries of the last years of the war.

October 31 1917, the British troops occupied the city of Beersheba.

9 December 1917, the troops of the British General Allenby occupied the holy city of Jerusalem. It took three years to walk from the Suez Canal to Palestine.

11 March, 1917, the British occupied Baghdad, and 1, October 1918, with the support of Arab rebels from Arabia, taken Damascus.

October 24 of the same year was taken Iraqi Kirkuk, and October 26 - the Syrian city of Aleppo.

The hostilities in the Middle East ended on October 30 on 1918, with the signing of the Entente and the defeated Turkey of the Mudros Armistice (Island of Lemnos).

Time to war and time to peace.

In Jerusalem, those events are reminiscent of the British Military Cemetery and the Cenotaph. 2514 soldiers of the Commonwealth are buried in the cemetery, 100 of whom have never been identified. At the bottom of the Cenotaph in one line on four sides in English is the inscription: Near this spot, the London Division, 60th December 9. “The Holy City was liberated by the 1917 London Division of 60 in December of 9 of the year. Built by co-workers for those officers, non-commissioned officers and soldiers who died in the battle for Jerusalem ”).

Note that the Allies on the Entente at the initial stage of the war interacted with the Russian troops in the Caucasus and Persian areas, but then cooled.

Russian troops conducted successful Sarykamysh and Erzerum offensive operations on the Caucasian front, and on the Persian front at the beginning of 1916, during the Hamadan and Kermanshah operations, attacked Baghdad (Nikolai Nikolayevich Baratov's expeditionary force in Persia).

In his memoirs, “The Battle Path,” a participant in those events, the future “Red Murat” and Marshal Semyon Budyonny, only on one page of the book mentions the city of Baghdad. He served in the 18 th Dragoon Seversky Regiment of the Caucasian Cavalry Division without number. She was considered one of the best (in the army she was called “semi-guard”).

Dan was an order - to Baghdad! But the offensive did not last long.

According to S.M. Budyonny, his foot set foot on the land of Mesopotamia. Travels were also distinguished from other regiments. Marshal recalled:

“We acted in the rear of the enemy twenty-two days. For these actions, platoon soldiers received awards. I was also awarded the St. George Cross of 2 degree ”.

The British decided to take Baghdad independently on the Mesopotamian front.

CAMELS AND MULES IN WAR

In the Middle East, both warring parties used Aviation, artillery, cars and armored vehicles. But the main means of transportation were horses, people, mules and camels.

A significant contribution to the events in this theater of war was made by the Jews. Initially, a unit was created with an unusual name: “The Zion Drivers Corps”, also known as the “Mule Drivers Unit”. At the end of April, 1915, a squad (500 man) participated in an operation on the Gallipoli peninsula. Volunteers brought ammunition to the front, 14 fighters died, more than 60 were injured. After the English left Gallipoli, the squad returned to Egypt, where it was disbanded in May of 1916.

There were two types of camel formations. Imperial Camel Corps - military unit of the British Empire during the war. The personnel moved on camels. The corps was founded in January 1916 (four battalions). Composition - 4150 man and 4800 camels. During the conduct of hostilities killed 246 corps.

The Egyptian camel transport corps was engaged in “logistics”. 72,5 thousand camels passed through it and about 170 thousand drovers passed by.

In 1921, a monument to the Imperial Camel Corps was erected in London. The names of the dead warriors and the names of the 20 battles in which he took part are stamped on the monument. The combat path of the corps is well described in the literature.

He served only Jews in three battalions of the Jewish Legion: 1700 from the USA, 1500 from Eretz Yisrael, 1400 from England, 300 from Canada, 50 from Argentina, 50 liberated Ottoman prisoners. In 1961, the Legion House and the Museum of the Jewish Legion were opened.

Over 40 years ago, an Israeli liaison officer told me some details about the members of the Jewish Legion. Among them was Trumpeldor. During the Russian-Japanese war, he distinguished himself in the defense of Port Arthur, but lost his left arm above the elbow. He continued to serve, became an ensign. He studied at the Law Faculty of St. Petersburg University. Expelled from university for political activism. Now his name is known in Russia, in Simferopol. There is a memorial plaque on the house where he lived: “The plaque is set in memory of the hero of the Russian-Japanese war, full of St. George’s Cavalry I. Trumpeldor, a native of Pyatigorsk. May 2003 of the Year. And in Moscow on the Poklonnaya Hill in the Holocaust Museum, among the names of the heroes of the Russian-Japanese war is the name of Joseph Trumpeldor.

In December 1973, the author of these lines was located at the headquarters of the control center (Ismailia) of the United Nations Truce Supervision Organization in Palestine (UNTSO). From the headquarters from Jerusalem, mail arrived every week (the UN has its diplomatic mail). By the way, the mission headquarters is located in the former building of the British High Commissioner - “Government House”.

Sent several newspapers Jerusalem Post in English. The head of the control center, French major Volos, gave me one of the newspapers, warning: “For security reasons, don’t transfer strangers to outside the headquarters.”

The obituary reported that 1 on December 1973 of the year Ben-Gurion passed away. Half the newspaper was dedicated to him. In this century, for the past five years, I regularly read the Jerusalem Post on the Internet.

In 1917, British troops unsuccessfully stormed the Gaza area twice. Newspapers did not stint on the criticism of the command. As usual, changed the command. The commander of the Egyptian expeditionary corps became General Edmund Allenby (in two years he will become field marshal).

More Gaza was not stormed, but went into a gap through the desert to Beersheba (in a straight line 46 km), introducing the enemy into error. The important role played by the cavalry.

The battle for Beersheba took place on October 31 1917 of the year. The turning point of the battle was the rapid attack of the 4 of the Australian light cavalry brigade.

Our story will be incomplete if you do not talk about the two highest monuments in the Middle East, reminiscent of the "Great War" (1914 – 1918).

Let's start with the monument dedicated to the defenders of the Suez Canal. The inscription in French is written on the monument: "1914 DEFENSE DU CANAL DE SUEZ 1918".

Note that the First World War touched the territory of Egypt, Palestine and Mesopotamia. At the beginning of 1915, Turkish troops began their advance from Palestine through central Sinai towards the Suez Canal. The direction of the attack was chosen unsuccessfully. Troops had to carry with them through the desert transporting means. And although three boats and a small Turkish detachment crossed the canal, but the landing was destroyed by British forces. This happened 2 – 3 February 1915 of the year. The Turks retreated to El Arish, but the British did not pursue them due to the lack of a sufficient number of camels.

It took the British troops nearly three years to reach Jerusalem. A monument was erected for the defenders of the Suez Canal in 1930. In appearance, it resembles a tuning fork. The author of these lines had to not only visit the monument, but also fly over him on an airplane and a helicopter, look at the monument through the eyes of memory. The fact is that I had to be a military observer in the UN Observer Body in Palestine (UNTSO) from 1973 to 1980 for five years. On the west bank of the Suez Canal, UN peacekeepers carried out twice a month to inspect anti-aircraft missile positions.

Forty years ago, I and the French military observer, a graduate of the Saint-Cyr military school, were instructed to check the area south of Ismailia. We drove up to the monument, next to which was the anti-aircraft artillery position. The check did not take much time - there were no violations.

It seemed that the patroness of the story of Clio came into action. At first, my French colleague, and then the Egyptian officer, reported some details related to the construction of this monument. The creators of the monument are the French: the long-lived sculptor Raymond Delamarre and the architect Michelle Ru-Spitz.

The monument is located on a hill with the biblical name of Jebel Mariam (in Arabic - Mount Mary). The height of the plateau is 30 m above the level of Lake Timsah, from the monument to the Suez Canal near 300 m. A majestic monument appears before the ships passing through the canal.

The monument was opened 3 February 1930 of the year. The military history of the beginning of the 20th century is captured in this monument.

Now a few words about the modern monument: The Arab flagpole in Aqaba (Jordan), its height is 132 m. The size of the flag is 30х60 m. The Bedouin army during the uprising against the Ottoman Empire 6 June 1916 of the year seized Aqaba. This victory led to the creation of independent Arab states. On the waterfront of Aqaba 2 in October 2004, a flag appeared that entered the Guinness Book of Records.

At the Aqaba bazaar, you can offer a bronze compass of the British intelligence officer Lawrence of Arabia. It is clear that the East is really a delicate matter.

Ctrl Enter
Noticed oshЫbku Highlight text and press. Ctrl + Enter
We are
The development of the military-industrial complex of the Russian Empire in the years of WWIFaithful son of the Fatherland - Marshal Semen Mikhailovich Budyonny
Military Reviewin Yandex News
Military Reviewin Google News
22 comments
Information
Dear reader, to leave comments on the publication, you must sign in.