November 18 2017
86
The newest Russian radar and guidance aircraft A-100 made its first flight on Saturday, the press service of the VEGA concern (part of the Russian Electronics holding of the Rostec state corporation) reported that it was developing the car.

18 November, 2017, the first flight of the multifunctional aviation complex of the A-100 radar patrol and guidance took place
- Said in concern. 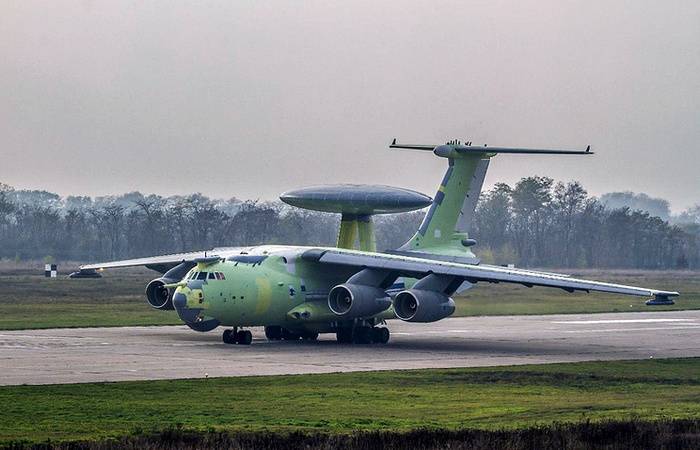 As explained in the "Vega", during the first flight "the aerodynamic characteristics of the aircraft, the operability of the avionics and parts of the target equipment of the RTK [radio engineering complex] were checked."

The press service recalled that the A-100 was created on the basis of the Il-76MD-90А military transport aircraft, on which "a fairing with a unique antenna system and the latest special radio equipment was installed", which allow the new machine to quickly build up the radar field in a given direction .

In addition, aviation the complex can detect and track air and other targets, as well as participate in the management of fighter and strike aircraft when pointing at air, ground and sea targets
- explained in the "Vega".

Aircraft A-100 is created in the framework of the experimental design work "Premier 476". It should replace the A-50 and A-50U aircraft. Earlier it was reported that the serial supply of new machines to the troops will begin in 2020, reports TASS

Ctrl Enter
Noticed oshЫbku Highlight text and press. Ctrl + Enter
We are
IL-76MD made the first long flight in the framework of factory tests
Military Reviewin Yandex News
Military Reviewin Google News
86 comments
Information
Dear reader, to leave comments on the publication, you must to register.