November 18 2017
48
We continue, under the heading "Pulp of the day off," to acquaint our readers with some of the armies of the world and with the system of military organization in various parts of the world. Today, under the heading - the army of such a state as Papua - New Guinea. The country itself is in many ways already exotic, but when an exotic country, in our understanding, has its own army, it is doubly exotic.


Papua New Guinea is a state with a population of about 7,5 million people. In fact, it is a British overseas colony with formal sovereignty. The ruler of Papua New Guinea is still (de jure) the British Queen Elizabeth II. In the state there is a post of governor-general, as in other British overseas colonies. The chief executive is considered to be the chairman of the government, Peter O'Neill, who has been in office since 2011.

The Ministry of Defense of Papua New Guinea was formed in 1974. He frankly does not pursue financing, he does not tell about “terrible threats” of a military nature, as is now fashionable in a number of the same British colonies and protectorates. Therefore, the military budget 2016 year was less than half a percent of GDP. According to this indicator, Papua - New Guinea is in the 14-10 among all countries of the world that have armed forces. In Papua New Guinea, these forces are called the country's Defense Forces.

To date, the number of New Guinean soldiers - about 2,5 thousands of people. At the same time, the main military department several years ago prepared the so-called “White Book of National Defense”, which stated that in case of a security threat to the statehood of Papua New Guinea, the number of troops could be doubled. The most "militarist" minded members of the government predict an increase in the country's army by 2030 to 10 by a thousand people.

Building the personnel of the engineering battalion

The structure of the country's self-defense troops is such that, in addition to the ground forces, consisting of two infantry, one engineering battalion, as well as separate platoons of the medical service and communications, there are sea and air segments. The naval component of the troops is 4 Pacific class patrol boats and two Balikpapan class landing ships (boats). Ships (boats) of the same class are in service with the Navy of the Philippines and Australia. Aviation Papua New Guinea is represented mainly by helicopters and transport aircraft. There are American, British and other models. 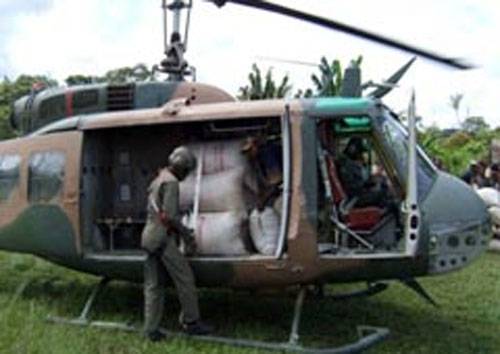 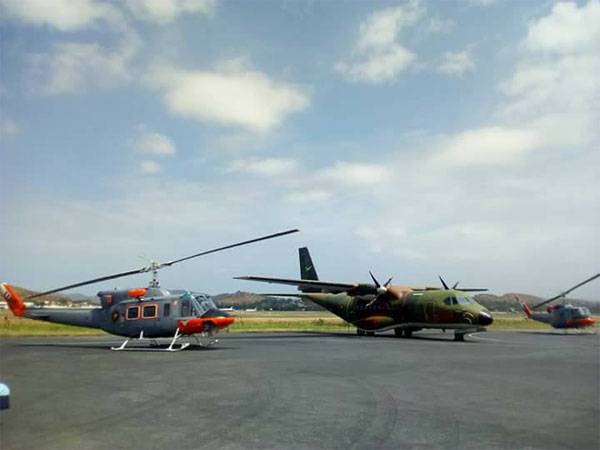 The Ministry of Defense of Papua - New Guinea notes that the most frequent types of operations are operations to counter drug smuggling and international piracy.

Photos from the New Guinean Army: 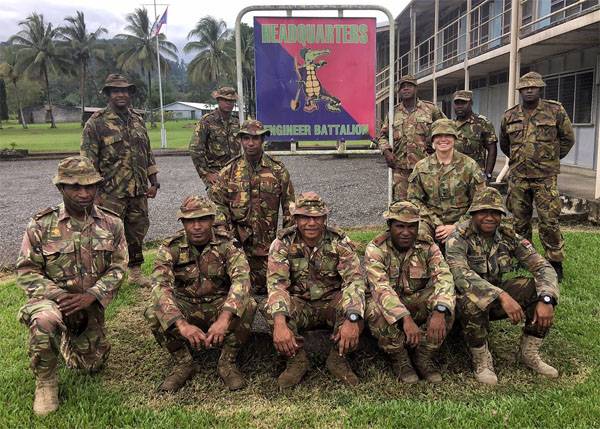 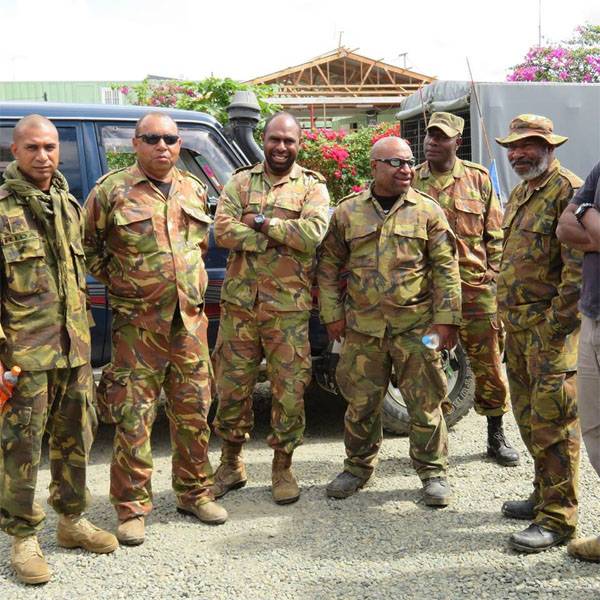 On practical training sessions (you can get acquainted with the "shooter"): 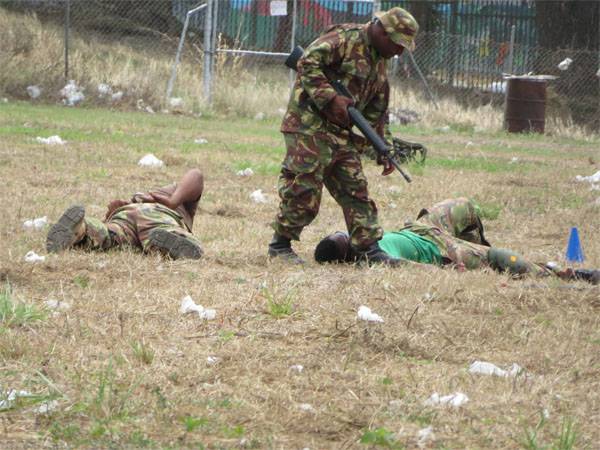 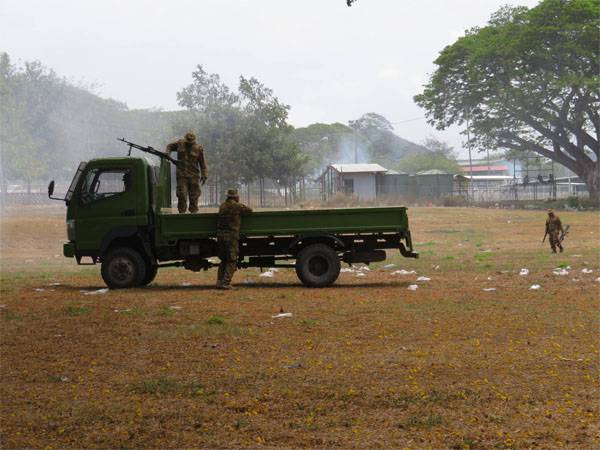 Exam with the presence of an Australian officer: 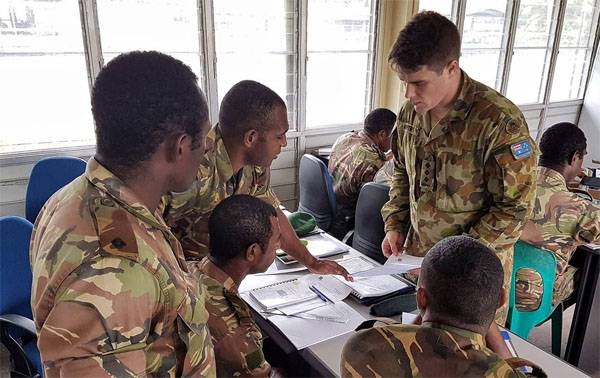 Separately, the troops are tasked with ensuring security during national elections. Under the conditions of a very diverse composition of the country's inhabitants, in which there are three official languages, the security of the elections is determined by one of the priorities. The photo shows the return of the PNG Army soldiers returning from a security operation in one of the country's regions (as is evident weapons when loading on board, the servicemen do not have): 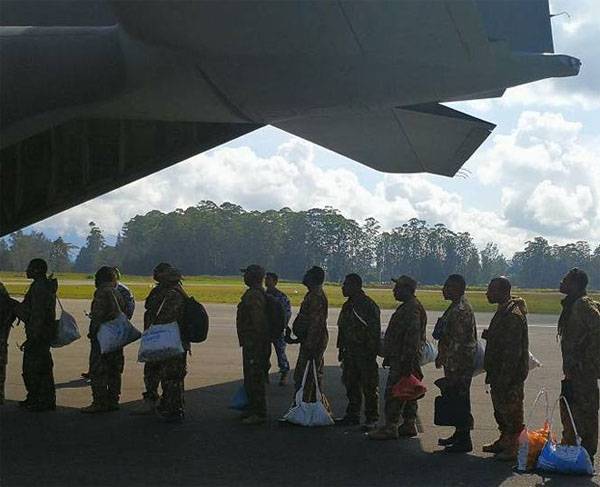 And this is the official emblem of the Defense Forces and the main military department of Papua New Guinea. 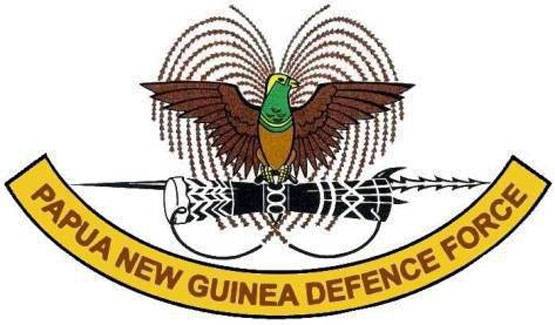 The emblem depicts one of the main symbols of the country - the bird of paradise, living only in Papua - New Guinea.