Pavlensky: help, the bully is deprived of view!

November 21 2017
13
Not! Sometimes we have funny human copies seize the sympathies and minds of our opposition! After all, many people remember the immortal lines from a children's work: “Do not go, children, go for a walk to Africa! In Africa, sharks, in Africa, gorillas, in Africa, big evil crocodiles! ”And many heed these tips, and some are unbearable and want the hard way to make sure there are sharks and crocodiles. 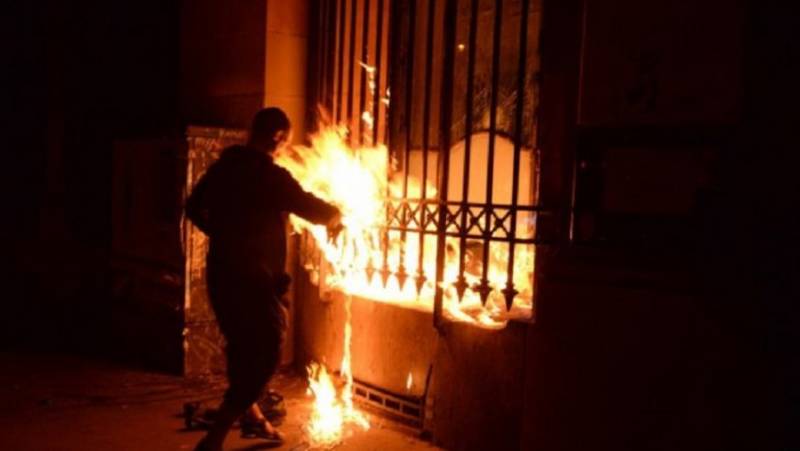 Here, take, for example, Mr. Pavlensky, who is admitted by our fighters for universal human values. How many laudatory epithets have been spilled out about his creative expressions! Some of the “installations” are worth it: either self-entanglement with barbed wire, stitching up your mouth as a symbol of lack of freedom of speech in Russia, or wasteful use of your genitals: everything, everything that is acquired by overwork and restless spirit of genius, everything is under the tail. They did not appreciate the work, they were not afraid of accusing nailing their scrotum to the pavement, they did not create a martyr of conscience from a psychopath. So the restless genius had to go to an ordinary criminal act - to set fire to the doors of the FSB in order to shake the foundations of the totalitarian system in Russia. Resisted totalitarianism, surprisingly (here, it seems, acted strictly according to the proverb: take yourself ... which is wrong for us), closed his eyes to this "feat", but when the overbearing genius caused a fight and allowed sexual violence against the theater actress Pavlensky labored, “the anti-human regime” did not put him in his bloody dungeons, but cruelly allowed the “artist” to flee to the land of his dream - Africa, that is, to the country of Western democracy - France.

It would seem that everything in the West will be picked up and warmed. But it turned out, as in the classic movie: and robbed, and heated. They didn’t understand the soul of the beautiful impulses of the escaped convicts ... sorry, the artist, didn’t pay any attention to the genius, didn’t provide bananas and pineapples. Having jumped "along the branches" of the French household tree, the artist did not think of anything new, how to go the beaten track. Since the scrotum was already full of holes, it was painful to stitch up the mouth again, and in a damp European climate, you can also make chiry, if you entangle yourself with wire and scum in the streets, one way of self-expression remained - arson! What was successfully executed - was set on fire the front door of the French bank! But, contrary to expectations, the usual applause from the same geniuses (the greatest concentration, it seems, such “talents” only in Russia) did not follow. On the contrary, the contract workers of the French tailoring came running around, wrapped the fins ..., sorry, hands the artist and laid him down (just like in the hated totalitarian state!) With his face on the pavement.

After that, everything seemed to evolve according to the laws of the genre: the prisoner’s face, the face of a prisoner exhausted by inhuman spiritual sufferings, the satraps in the form of police and all kinds of security officials, crowds of people with placards in their hands are painted with angry demands to give freedom to an artist imprisoned in prison, usual liberal op in the media all over the world (necessarily around the world, otherwise it’s not an interesting idea!), meeting all sorts of prime ministers with Macron with the obligatory delivery of petitions demanding freedom to the artist with peace th name finally crumble and shackles - freedom! The apotheosis is the performance of Pavlensky standing on an armored car and calling on the western man to “open” his eyes and see the spiritual messiah.

But something went wrong. They tied up, murdered in the bullpen (or whatever they called the jail of preliminary detention), the trial in a closed session and - the madhouse (to put it politically correct, a psychiatric hospital). And here a completely unexpected thing happened! From the French torture chambers there were shouts about the unjust trial, about the horrors that were happening in the country of Western welfare and rampant democracy! Why is this happening? Instead of forty ships (from the words of Pavlensky himself) under the supervision of dozens of lenses of photo and video cameras, defensive ketch lawyers and (as a result) of insistent demands to give the creator freedom of expression, - a closed session without the right to pry into one’s own defense .

Guys, where are Africa, Mordor and where is the world of the triumph of democracy and respect for human rights? It seems that Mr. Pavlensky has already found the answer for himself. Otherwise, he would not whine because of the walls of the psychiatric hospital and would not lament that he simply had not even been given the word in his defense and held a court in a closed format.

In connection with this, I recall one more example - these are the accusatory speeches of the father of the former FSB lieutenant colonel Litvinenko, who was poisoned with polonium-210, that it was the special services of the Russian Federation that killed his son, and he is so disgusted with Russia that “I don’t eat can". All his accusatory speeches sounded on camera and they were thrust with pleasure into all issues News in the West. After Litvinenko’s father had run out of “compromising material”, he was easily left to himself, doomed to a half-starved existence. Hunger and everyday deprivation turned out to be excellent psychiatrists, and after some time the accuser turned through the media to Putin to forgive him and let him go back to Russia. If memory serves me right, then Putin showed goodwill and allowed this gentleman to return to the country. And, mind you, without fanfare and timpani. Wrong? Recognized a mistake? We forgive, but no more dirty tricks.

I think that such examples should be remembered and not forgotten by those who today, thinking that the price paid for dirty tricks is somewhere out there, behind the hills, in their performances in various talk shows and other media performances, sometimes overstep the boundaries of all decency and moral norms. What I call them.