Ars Technica: Russia has plans to compete with SpaceX - however there are weak points

November 20 2017
79
The emergence of private commercial companies has already had a significant impact on the rocket and space industry. At present, such organizations attract attention and investment, and in addition, demonstrate competition with recognized market leaders. This situation can not fail to attract the attention of specialists, the public and the press. Quite expectedly there are attempts to analyze current events and forecasts of further developments.


November 13, the American popular science publication Ars Technica, published another material on the state of the global space industry, as well as on the relationships of its various representatives. Eric Berger, editor of the space department, presented an article entitled “Russia has a flaw” —— “Russia has plans to compete with SpaceX — but there are also weak points.” As the name suggests, the author of the article reviewed the activities of the Russian space industry and the American company SpaceX, and also made conclusions about the impact of their work on each other.

In the subtitle of his article, E. Berger made a curious thesis. He believes that the success of the latest Russian plans directly depends on the state of affairs in the new projects of SpaceX. In the article itself, the author revealed this thesis in more detail. 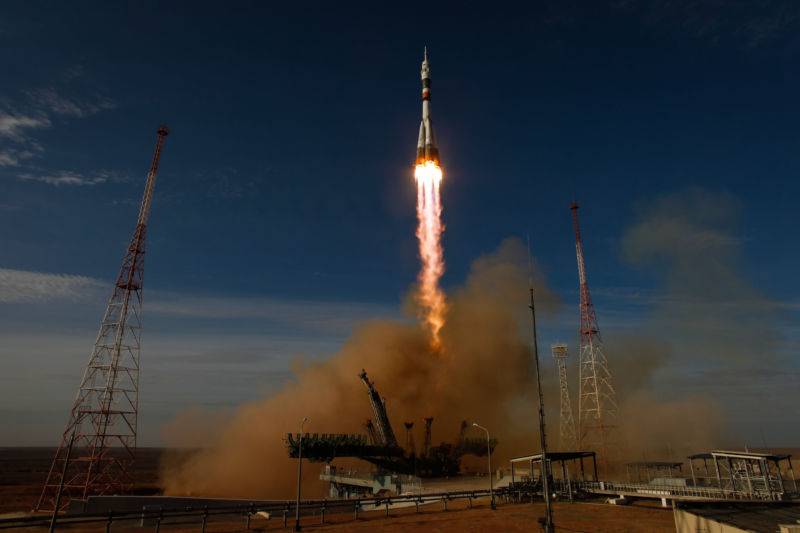 Author Ars Technica begins his article with a reminder of the events of the recent past. Back in 2013, as he writes, the honored space fleet of Russia retained almost half of the launch market in the interests of commercial customers. However, then new players appeared on the market - first of all, the private American company SpaceX. The activity of new competitors has led to the fact that Russia has lost its dominant position in the rocket and space market.

In the current 2017 year, by the time the article appeared, the Russian rocket and space industry carried out 17 launch vehicle launches with various payloads into orbit. At the same time, only a third of the launches were carried out on a commercial basis - not in the interests of the Russian state structures and not within the framework of ensuring the activities of the International Space Station.

In the same period, SpaceX completed 16 launches. The overwhelming majority of them - 11 launches - were carried out in order to put commercial cargo into orbit. The management of a private company believes that in 2018, this difference in launch structure will only increase. To obtain such results, it is planned to increase the number of launches of Falcon 9 launch vehicles.

As E. Berger points out, the Russian industry understands its far from outstanding figures, and therefore takes action. The Russian rocket and space corporation, Energia, is accelerating the development of a promising middle-class launch vehicle. This project was named Soyuz-5. In the future, such a rocket could replace the carriers of the Soyuz family used to deliver astronauts to the ISS. In addition, it can compete with SpaceX's missiles.

E. Berger cites the words of Russian journalist Anatoly Zak, who specializes in space issues. He claims that Russian officials have high hopes for the new project. In addition, the Kremlin regards the new launch vehicle Soyuz-5 as a domestic challenge to the existing challenges in the form of foreign developments. It is considered as a new means of fighting for commercial orders, which makes this promising project more than relevant.

Too small and too late?

A. Zak believes that the Russian rocket and space industry managed to get noticeable successes in the framework of the Soyuz-5 project. Preliminary design work on this rocket should be completed in 2017 year. Thus, with the successful implementation of all plans, Energia will be able to bring a new carrier to the market by the end of 2021. The author mentions that, according to known data, the Soyuz-5 launch vehicle will be built according to a three-step scheme and will receive RD-171 liquid engines using kerosene. For comparison, Merlin engines used on Falcon 9 rockets also work on kerosene.

E. Berger points out that the Russian press seems to lack understanding of an important fact. It lies in the fact that in the coming years, SpaceX is not going to stop there, and by 2021 it plans to get new results. To understand the possible development of events, he proposes to consider the results of the activities of the American company in recent years.

So, four years ago, the American company built the first version of the Falcon 9 carrier. This rocket could be used only once and brought to low earth orbit 10,5 t cargo. Next year, according to existing plans, the fifth modification of the Falcon 9 rocket will fly. It will be optimized for reusable use. In addition, it is assumed that this carrier will be able to put 23 t into low Earth orbit.

The American author believes that the new rocket from SpaceX will be able to show some success, and in favor of this assumption, he believes, says the company's previous activities. In addition, the emergence of a new version of the Falcon 9 will have a definite impact on the market in general and on the Russian carrier Soyuz-5 in particular.

A promising Russian rocket debuts internationally in 2021 year. E. Berger believes that in this case, Soyuz-5 will not be able to compete with the newest Falcon 9. The launch of the American rocket will have to cost 60 million dollars, and besides, by the beginning of the next decade it will have a certain history starts. The acceleration of the pre-launch preparation process expected by the author will further enhance the potential of the Falcon 9 carrier. As a result, by the year 2021, SpaceX, unlike the Russian space industry, will be able to launch commercial launches within the shortest possible time after receiving an order, as well as at the expected price of 60 million dollars.

The article by Ars Technica “Russia has a plan to compete with SpaceX — but it has a flaw” on the current plans of Russian and American specialists is of some interest, although from a certain point of view it looks very predictable. It is hardly worth recalling that in recent years, new specific “traditions” have been formed around the rocket and space industry. Thus, for some time it has been considered right to admire the success or even the plans of individual private companies, but at the same time mercilessly criticize the “old” market leaders. All this to a certain extent provokes controversy and leads to well-known results.

Given these "customs", in the article Ars Technica, you can find some weaknesses. Part of the proposed theses makes us recall the notorious double standards and other not the most honest techniques. As a result, the article, despite the interesting topic and a number of curious theses, cannot be considered fully objective.

The article begins with a comparison of the number of launches and the structure of the order book of competing organizations. In this case, the author does not take into account some features of the executed launches. For example, SpaceX, when compared with Russian organizations of the rocket and space industry, clearly gains only in the field of launching of middle-class missiles. In the category of heavy launch vehicles - despite many years of promises - she has nothing to offer yet. Russia, in turn, has at its disposal effective and inexpensive means of removing the load of this class.

Also, there are questions to the process of comparing the promising Russian launch vehicle "Soyuz-5" and the expected new modification of the American Falcon 9. So, assessing the future of the two projects, Eric Berger shows a clear condescension to the rocket, created in the United States. The carrier that does not exist and is not in use is evaluated by the declared characteristics, which gives the most optimistic picture.

It is quite expected that the Soyuz-5 rocket, which is also at the design stage, clearly loses in this comparison to a foreign competitor. Moreover, as indicated by the American author, the Russian development will be inferior to foreign immediately, at the time of its appearance.

It is curious that the author of Ars Technica cites the reputation of the company SpaceX as an argument in favor of the successful completion of work on the new rocket of the Falcon 9 family. He argues that the company's previous activities and successes point to the possibility of successful completion of the work. The Russian project, however, he refuses such advantages. It is already known that the new carrier “Soyuz-5” should be based on the worked-out components and technologies of previous projects that have been repeatedly tested by practice. However, E. Berger does not take this fact into account when evaluating the prospects for a rocket.

It is hardly necessary to argue with the fact that SpaceX really demonstrates serious success and significantly affects the market for commercial launches. However, noting the successes of a young firm, one should remain within reasonable limits and not try to praise one organization at the expense of incorrect criticism of others. Comparison with the use of not the most honest methods can negatively affect the reputation of the author, as well as praised projects. Hardly missiles of the Falcon 9 family - and so deserving of their fame - need such an advertisement.


The article “Russia has a plan to compete with SpaceX — but it has a flaw”:
https://arstechnica.com/science/2017/11/russian-rocket-to-compete-with-spacex-racing-to-launch-pad-in-2021/