Rosgidromet armament would envy the armies of many countries

November 17 2017
31
The other day, the Internet was relatively calm. news, which would be more suited to April Fool's joke. Russian meteorologists will have at their disposal 68 D-30 howitzers of 122-mm caliber, which will be handed over to them by the Russian Defense Ministry. The relevant order of the Government of the Russian Federation was signed on November 8 of the year 2017. It is reported that this is the most significant update and replenishment of the fleet of artillery Rosgidromet over the past couple of decades. At the same time, there is not a drop of humor in the news: Russian meteorologists use receiver artillery to implement anti-avalanche measures.


If we still approach this news with irony, then it can be noted that the armaments of Roshydromet would be envied by the modern armies of many countries of the world. And envy is really something. Currently, armed avalanche service RosHydroMet are field BS-3 gun 100 mm (produced in 1944-1951 years), anti-aircraft artillery COP-19 100 mm (produced in 1947-1957 years), large-towed gun 2A36 "Hyacinth -B "caliber 152 mm (!), As well as mortars caliber 120, 160, 240 mm and grenade launchers, cheerfully reports the press service of the Ministry of Defense of Russia. To all this diversity, 122-mm howitzers will be added. It is known that at least one 2А36 “Hyacin-B” 152-mm large-capacity towed cannon is used by the anti-avalanche service unit of Rosgidromet in Kamchatka, this weapon was launched at the end of the 1970-s. 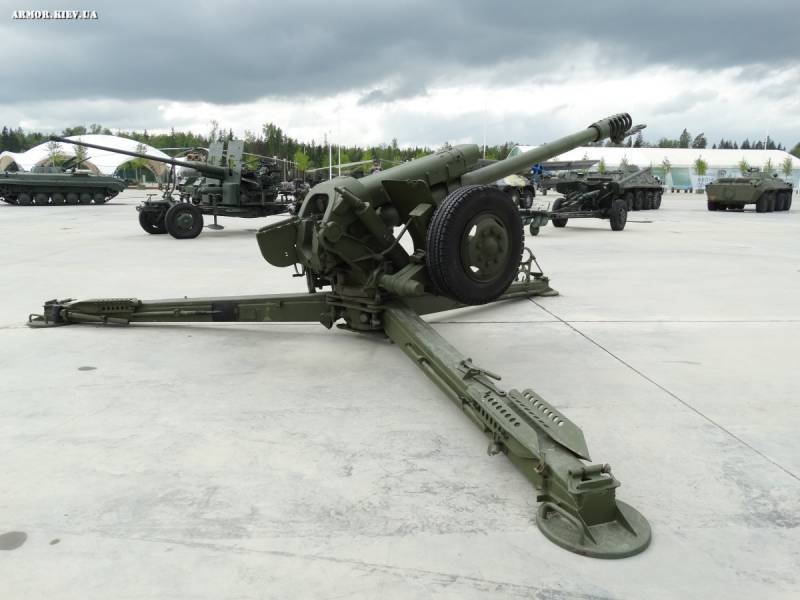 122 mm D-30 howitzer
In addition to the X-NUMX D-68 howitzers, the Ministry of Defense of the Russian Federation transferred to the Roshydromet 30 individual and 68 group kits and spare tools for them. In addition, Rosvidromet's avalanche service will be provided by 8 with thousands of RP-4,5 rounds (approximately 462 rounds per howitzer). The high-explosive fragmentation projectile OF-66 weighs 462 kg and contains 21,7 kg of explosive. Until recently, there were no 3,67-mm howitzers as part of the artillery of the anti-avalanche service of Roshydromet. The transfer of this military property will allow the agency to increase the efficiency of its specialized units.

Howitzer D-30 (index GRAU - 2А18) - Soviet towed 122-mm howitzer, put into service in the 1963 year. This artillery system is still used in the Russian army and the armies of many other states, becoming a worthy successor to the 122-mm howitzer M-30 of the 1938 model of the year. However, in the Russian army, this howitzer is practically decommissioned, more than 4 thousands of artillery systems of this type are in storage, another X-NUMX D-150 howitzers are in service with the Russian Airborne Forces (as of January 30), the National Guard forces (as of 2017 year), a certain amount is still in the ground forces, although here, by order of Defense Minister Sergei Shoigu, they are replaced with 20 mm Msta-B towed howitzer and 2016 mm ACS Acacia with 2013. . 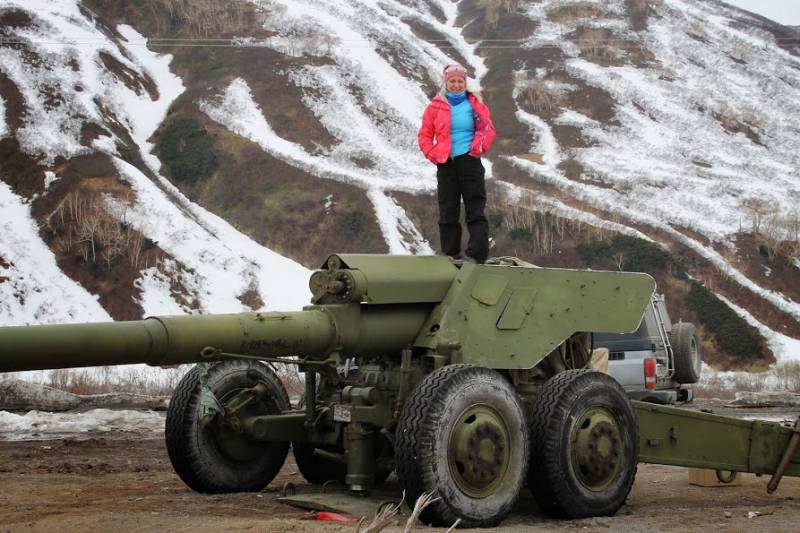 152-mm gun 2А36 "Hyacinth-B" in Kamchatka, photo: kazrr.livejournal.com
The X-NUMX mm D-122 howitzer is 30 tons, the gun is equipped with a barrel of X-NUMX gauges (3,2 mm). Charging - split-liner, maximum rate of fire is 38-4660 shots per minute. The target firing range is on the order of 6 kilometers, with the use of active missiles, it increases to 8 kilometers. The design of the howitzer barrels allows for a circular firing angle at elevation angles from −15 ° to + 22 °, while howitzer firing is possible at elevation angles from −5 ° to + 18 °, when the breech is located in sectors between adjacent beds . The Ural-7 truck was considered by the developers of the artillery system as a standard traction vehicle. The maximum permissible speed of howitzer transportation on roads with good hard surface (concrete or asphalt) is up to 70 km / h. In addition, the D-4320 howitzer can be equipped with a special ski set for transporting it through deep snow cover, but shooting from such a setup is impossible.

Howiters D-30 will help the Federal Service for Hydrometeorology and Environmental Monitoring of Russia to effectively deal with the dangerous avalanche in the mountainous terrain of our country. For these purposes, during the season of the most significant accumulation of snow masses in the mountains, short-term shelling is carried out, which provoke the convergence of snow, thus avoiding sudden and therefore dangerous avalanches. 122-mm howitzers and shots to them will be used to reduce avalanche danger by firing avalanche-prone mountain slopes and hills to protect the population, roads, overpasses, power lines and various infrastructure. 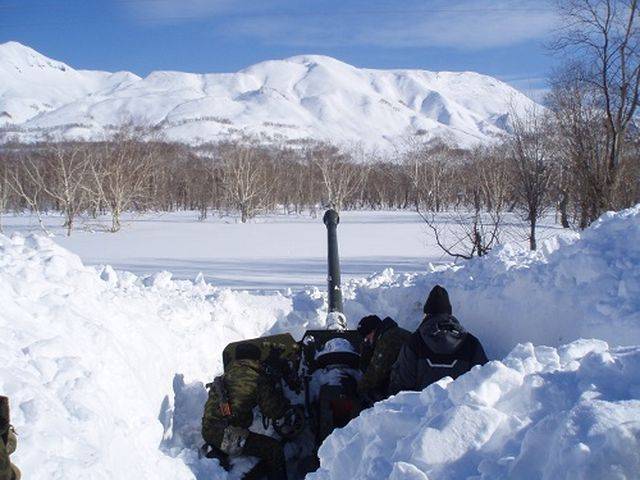 Works on warning avalanche with the help of the BS-3 gun, photo: meteorf.ru
Rosgidromet stresses that avalanches can cause significant damage to a country's economy, and they often also cause death. In this regard, the correct forecasting of avalanches and their preventive descent play a huge role in ensuring security in the mountainous regions of Russia. The resolution of the Russian government on 11 in May 1993 of the Year “On the creation of anti-avalanche service” was assigned to the Federal Service for Hydrometeorology and Environmental Monitoring (Roshydromet) the task of organizing work on carrying out activities related to the protection of objects of the economy and the population from the effects of avalanches their precautionary descent.

It is important to understand that the need to develop anti-avalanche service and organization of anti-avalanche protection in our country is determined by the extent of the spread of this phenomenon. In the Russian Federation, the area of ​​avalanche-hazardous areas is 3077,8 thousand square kilometers (this is 18% of the total area of ​​the country), 829,4 thousands more square kilometers today belong to the category of potentially avalanche-dangerous territories. Moreover, in the past few years, avalanche processes have become more active in Russia. If in the 2001 year, the number of avalanches caused by the precautionary descent was 174, then in the 2015 year - 381, and in the 2016 year - 305. 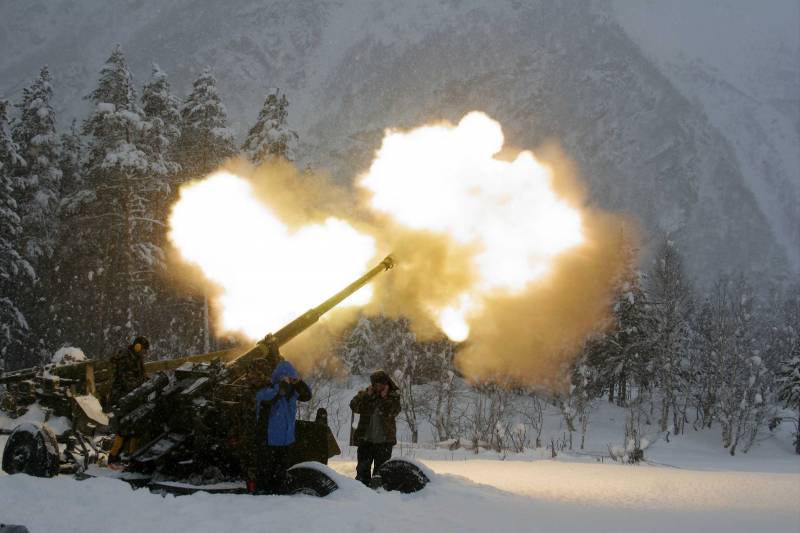 Works on warning avalanche with the help of anti-aircraft gun KS-19
Active influences on snow avalanche processes through the use of barreled artillery and grenade launchers are the final stage of the complex of avalanche operations. Protecting the population and infrastructure from snow avalanches using active impact means is done by preventing small amounts of snow from falling even before it accumulates a critical mass, which could lead to the descent of dangerous avalanches.

Thus, the anti-avalanche service of RosHydroMet North Caucasian Militarized Service eliminates and reduces the avalanche danger in the region (based on prepared specialized forecasts) by firing avalanche mountain slopes from 100-mm anti-aircraft guns KS-19, which are installed stationary. At the same time, shelling of the mountain slopes (with the required accuracy of hitting shells into the intended target) is very often carried out in the absence of visibility or in conditions of limited visibility (dark time of day, fog, snowfall) according to previously prepared coordinates. 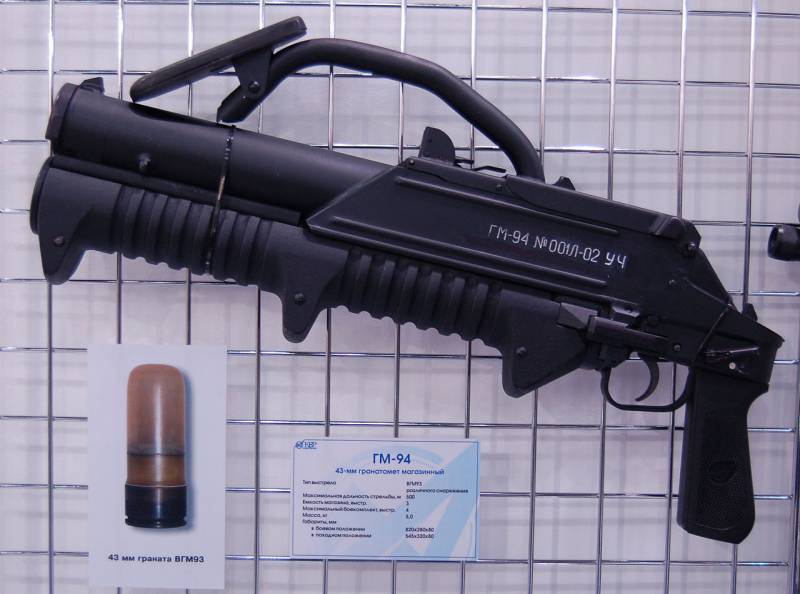 According to the information published on the official website of Roshydromet, in addition to barreled artillery, GM-94 hand-held grenade launchers are also used by the avalanche service for warning avalanches. Rare enough weapon, created at the beginning of the 1990-s by the designers of the Tula Instrument Design Bureau, and intended to arm the special units of the Ministry of Internal Affairs and the Federal Security Service of Russia. GM-94 is a 43-mm pump-action grenade launcher with a movable barrel, having dimensions of small arms, the target firing range is up to 300 meters.

Ctrl Enter
Noticed oshЫbku Highlight text and press. Ctrl + Enter
We are
Reports from the militia of New Russia for 27-28 September 2014 of the yearMisadventures and problems of Indian artillery
Military Reviewin Yandex News
Military Reviewin Google News
31 comment
Information
Dear reader, to leave comments on the publication, you must to register.