November 17 2017
49
More recently, a new gun from the Israeli was demonstrated armory IWI company. The new weapon received the name MASADA and journalists have dubbed it the “Israeli Glock”. Despite the fact that the gun is still completely fresh, nobody conceals certain aspects and features of its design and all of them are presented on the company's website in text or video material.


Taking into account the fact that most of the Internet resources were limited only to mentioning the appearance of a new pistol without any details of its device, it would not be superfluous to study weapons in more detail.

The reasons for the appearance of the gun MASADA

Any sensible leadership of the country is trying to provide its own army and law enforcement agencies with weapons and ammunition of its own production. Even if the country does not have the opportunity to develop its own unique weapons, it is still trying to deploy the production of weapons and ammunition on its territory under a license from major weapons companies. Such an approach makes it possible not to depend on other countries in the event of a deterioration in relations, or even war.

It would be naive to believe that Israel will not adhere to this rule and the replacement of the Glock, with a similarly designed gun of its own design, will not happen.

Those who are fond of handguns will remember that IWI has pistols under the designation Jericho 941. It should be noted that these guns in any of their performance are very charismatic, resemble the outwardly well-known “Desert Eagle”, and their characteristics are quite good, for which you need to thank a design similar to Hi-Power and CZ-75. This weapon has proven to be an excellent gun, combining both high reliability and accuracy, but the Austrian Glock liked more, primarily due to the high safety of the weapon.

One way or another, but the question of creating your own pistol, with a pre-stroke shock trigger mechanism, with a plastic frame and the possibility of relatively safe to carry a weapon with a cartridge in the chamber, was only temporary. It is still difficult to say how this gun will spread, but it is logical to assume that it should be used by the Israeli army and police.

The design of the gun MASADA 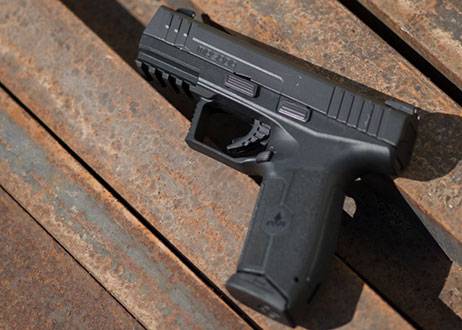 As for the firing mechanism, one can only say that it will be a percussion trigger with pre-arming, how much it will be similar to the “Glockovsky” while it is too early to discuss. In addition, the manufacturers themselves emphasize that USM can be replaced with a more convenient one, that is, it is assumed that this part of the weapon will exist in various ways.

If we talk about the adaptation of the gun for the specific needs of the shooter, then you can immediately pay attention to the possibility of fitting the handle of the weapon to the size of the user's palm. This is done in the simplest way, with the help of interchangeable rear pads on the handle of the weapon, which are held by the pin. Lining of three different sizes, which is quite enough in most cases. In the collection, everything looks harmonious and seems to be a single whole, but this is more likely the norm for modern pistols, claiming at least some distribution. 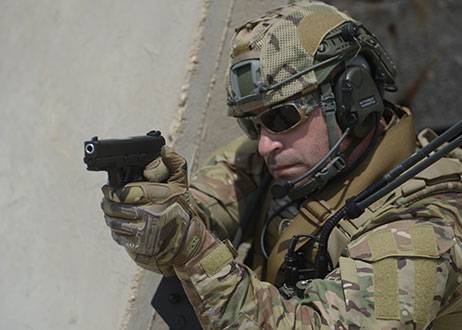 Sights, which were installed on the exhibition sample, are the usual rear sight and front sight with tritium inserts, but these are separate parts inserted into the seats on the casing-gate, which means they can also be replaced.
Separately, emphasis is placed on the “two-sidedness” of the weapon, but here it should be noted that from the controls, which generally can be duplicated, this gun has only a shutter delay key and a magazine eject button, there is no fuse switch.

The safety of the weapon is achieved thanks to the key mounted in the trigger of the gun. While it is not pressed, the trigger is blocked, and even if it is pressed, the pressing force will be large enough for the weapon to accidentally fire from interacting with foreign objects. It’s possible to argue about how safe it is to wear such pistols with a cartridge in the chamber for a long time, citing the most varied arguments, but time has shown that, with an adequate level of responsibility on the part of the owner, it is really safe. Apparently, the version of the weapon with the usual many switch fuse will also be present in the future line of pistols.

The frame of the gun is made of plastic. Anticipating questions about how reliable this plastic is in adverse conditions, the manufacturer noted on its website resistance to high and low temperatures without critical changes in strength, resistance to ultraviolet rays.

If you walk through individual trifles of weapons, then they include: a seat under the LCC or a flashlight in a frame under the barrel, an indicator of the presence of a cartridge in the chamber, played by the ejector of spent cartridges, notches on the casing-bolt for various grabs, in general, a standard set for most pistols past years 10-20.

Characteristics of the gun MASADA 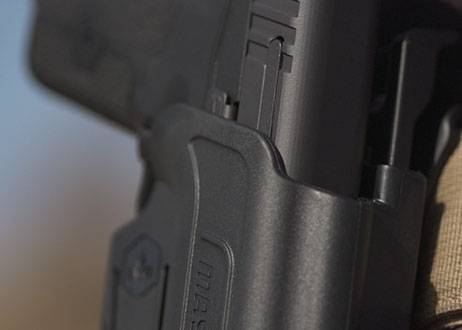 The sample gun presented is powered by 9x19 cartridges from a magazine with a capacity for 17 cartridges. However, the manufacturer plans to produce weapons not only for other common cartridges, but also of different dimensions, which by itself will affect the capacity of the same store and other parameters of the weapon.

The showpiece pistol boasts a fairly small weight in 650 grams without ammunition with a total length of 189 millimeters and a barrel length of 104 millimeters. By the way, the barrel of the pistol has a polygonal cut, but it’s not possible to say back that such cutting of the barrel will be preserved for the whole future of a number of pistols.

Pros and cons of the gun MASADA

While this weapon has not received at least some distribution, it cannot be given an adequate assessment, but some conclusions can be made. The first positive point of the new gun, or rather the entire line of guns, should be the price. It would be unwise to start the production of weapons that would be more expensive than their main competitor, the production of which is not only established, but also its position in the market is fairly stable. 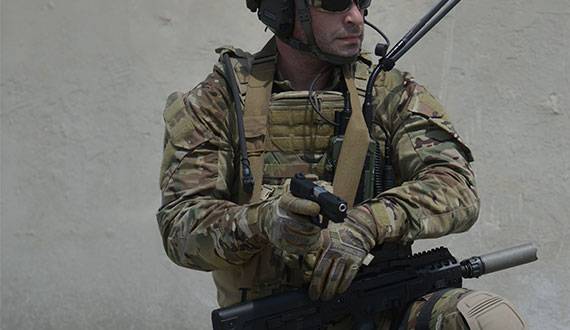 What can be more confidently said is about maintainability. If the manufacturer claims that individual weapon units can be replaced with more convenient and suitable ones for various preferences and tasks, then these units can be easily replaced in the event of their failure.

You can also note the potential adaptation of weapons for different cartridges by replacing individual parts of the MASADA pistol, but there will already affect demand in a market that is difficult to predict.

The drawbacks of weapons can also be found. First of all, strange as it sounds, it is a small weight pistol. 650 grams on the latest cartridges in the store should loudly “knock on” the accuracy, especially with more powerful ammunition than the 9x19. Separately on the manufacturer's website, a low-set trunk is indicated with a plus, which should have a positive effect on accuracy. It is a comparative affair of course, but even the Glock's trunk axis is visually located below. The location of the store extraction key, taking into account its mirror image, suggests possible random clicks when shooting, although it is doubtful that this will be possible.

In general, in order to give a specific assessment, it is necessary to “feel” this weapon, or at least talk to those who used it, and for obvious reasons, few have read the novelty.

In conclusion, I would like to say that when the material for the article about this pistol was just beginning to be collected, the attitude to the weapon was like another pistol, which is now producing ten new models a year with almost identical characteristics and design. However, in the process of even such a superficial acquaintance with weapons, the MASADA pistol gradually began to be liked, despite some controversial points in its design. It seems that the weapons do not have any interesting new solutions, everything that has been presented in it for a long time and repeatedly implemented in other models from other manufacturers, but to try how it all works all together and how much better or worse the Glock has a great desire. 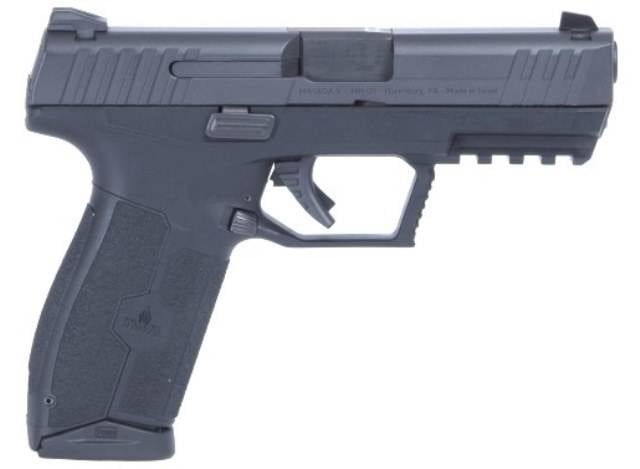 So we can say that if the designers of the IWI company work as well as their PR department, the gun turned out to be great.