Ax in the hands of the emperor. Battletrack Varangi. Part of 3

November 24 2017
35
The Varangian Guard went through the crucible of wars for almost half a millennium.


989 to 1265 she fought in 29 known to us major battles (wars) with an external opponent. Briefly look at their chronology.

Thus, from 29-known to us major battles (campaigns) with the participation of the Varangian Guard, won 20 - or almost 69%.

If we talk about the effectiveness in relation to opponents, it turns out this picture.

In battles with the Transcaucasian states (Abkhazia, Georgia, Armenia) - 100%, with Arabs - 80% effectiveness (on 4 victories - 1 defeat), and with the Normans, Pechenegs, Seljuk Turks and Franks, the battles proceeded with varying success - success percent xnumx, xnumx, xnumx and xnumx. The reasons for the different results lie in the specifics of weapons systems (the Normans and the Franks used knightly cavalry), tactics (Pechenegs and Seljuk Turks) [For example, the Pechenegs used a combination of cavalry tactics and battle tactics under the cover of mobile field reinforcement from carts. It was the use of this combined tactic that led them to victory at Drastar] or in a complex of other factors. The actions of the imperial army in the period under review led to the liquidation of the Bulgarian kingdom and the Pecheneg horde.

Finally, the Varangian Guard directly had a decisive influence on the course of such major battles as - at Shegfe, Ames, Cannes, Eski-Zagre, Levinium, Sirmia, as well as during the Cyprus campaign of Manuel. The Varangian Guard distinguished themselves by sacrificing themselves for the victory in the battle of Dirrachia, and for the salvation of the emperor in the battles of Halep (Aleppo), Manzikert and Miriokfal. 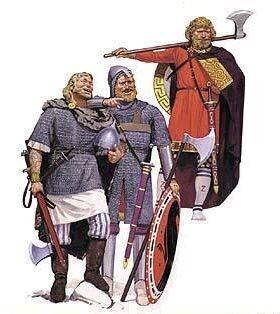 The most glorious periods in stories Varangian Guard.

1) The legendary era of Vasily II - a series of continuous victories over Georgians, Bulgarians, Armenians. 2) The campaigns of the “Byzantine Suvorov” - George Maniak (30-40 of the 11th century) - a series of victories over the Normans and Arabs. 3) The Hundred Years of the Three Great Comnenas (Alexey, John and Manuel) (1080 - 1180) - the period is significant with a complete victory over the Hungarians and the Pechenegs, as well as the persistent struggle against the Seljuk Turks. And even defeat at Dirrahii Immortalized Varanga.

The reigns of warrior emperors were most beneficial for Varanga — the guards gained combat experience, increased attention was paid to the army, and military campaigns were carefully planned and implemented.

The Byzantine imperial army, perhaps, was the best army in the world for many centuries, incorporating the best elements of military culture of distant and close neighbors while preserving the best ancient traditions. Varanga was a unique part of Byzantium, both in combat qualities and in terms of its duration. Devotion to basilevs puts the warangs on a par with the Russian marches and the Swiss guard. Among other things, this was explained by the location of the Varangas in the social structure of the empire, their isolation from the surrounding society, intrigues and clan interests - this initially assumed loyalty to the only one on which they depended financially - basil.

The change in armaments and equipment reflected both regional peculiarities, whose natives replenished the Varangian Guard, European borrowing, and tendencies in changing the Byzantine proper. weapons and gear.

Unlike some other guards units, Varanga performed the most important combat missions. In its composition gathered the best warriors of Europe, the northerners (traditionally strong fighters), she was distinguished by increased motivation and fighting spirit.

As previously noted in our articles on this topic, the shield, helmet, and armor were worth a fortune in this era. In European countries, one poorly equipped or unarmed squadron was a single fully equipped plate soldier. The fighters of Varanga could afford the highest quality weapons, especially since representatives of a number of European states were present in its structure.

Having characterized the elite character of Varangi, it is worth mentioning the universality of the guard, which was manifested in its multifunctionality. The Varangian Guard solved a wide range of combat missions - led field and siege combat operations, carried naval and garrison service. The fighters of Varanga performed the functions of liaison. As a traveling infantry, the Varangas anticipated the Dragoon regiments of New Time - and due to its inherent mobility, Varang was an important means of operational maneuver.

Implemented guards and important domestic tasks. Often the lizards performed police functions in the city, were in a cordon (they were besieged by the crowd) and the imperial convoy, solved prison tasks, detained and arrested the highest persons of the empire (for example, the Patriarch), carried out inquiry and investigation. As a lifeguard of the current monarch, Varang provided key issues of state security. Representatives of the Varangian Guard held various posts in the state and the army - from the commander-in-chief of the army in action (Syria 1030-s - Great Etheariarch Feoktist) to the batman of the emperor Alexei I - Fedot.

Thus, the Byzantine Varangian Guard is a universal military formation of increased reliability. If to characterize the latter circumstance (besides being entrusted to guarding the top officials of the empire), Varanga guarded the State Treasury, was responsible for the defense of the most important sector of the Constantinople fortress wall and, in the person of her commander, was the keeper of the gates of the capital.

Varanga was an important element in bringing together elites of a number of states. So, in 1047, when Harald occupied the Norwegian throne, Kievan Rus was again in peace and friendship with the Byzantine Empire - and Yaroslav the Wise was a matchmaker of Constantine IX (thanks to the marriage of the son of Vsevolod and the emperor's daughter), as well as the test of Harald (marriage of the daughter of Elizabeth ). The Russian, Norwegian, and Byzantine ruling dynasties were successively bound by kinship. Dynastic and friendly contacts continued in later times. For example, the challenger to the throne (the future basil) Andronik I Komnenos in 1164 was cordially received by the Galician prince Yaroslav Osmomysl, his cousin. And not only visited in Russia, but also participated in the meetings of the princely council. For at least a century, a union of three empires was observed - and Varang was an important link.

The warriors of Varanga were also a religious-cultural link between the peoples of Eastern and Northern Europe and Byzantium - perceiving the high achievements of the empire in spiritual and material culture, being the bearers of Christian values.