Dear Khrushchev, or How dangerous are the US aircraft carriers for Russia

November 17 2017
242
Speaking about the further development of armaments and the possibility of a hypothetical confrontation between the armed forces of Russia and the United States, more and more foreign media and experts are thinking that the US attack aircraft carrier groups are not such a panacea for solving all problems. 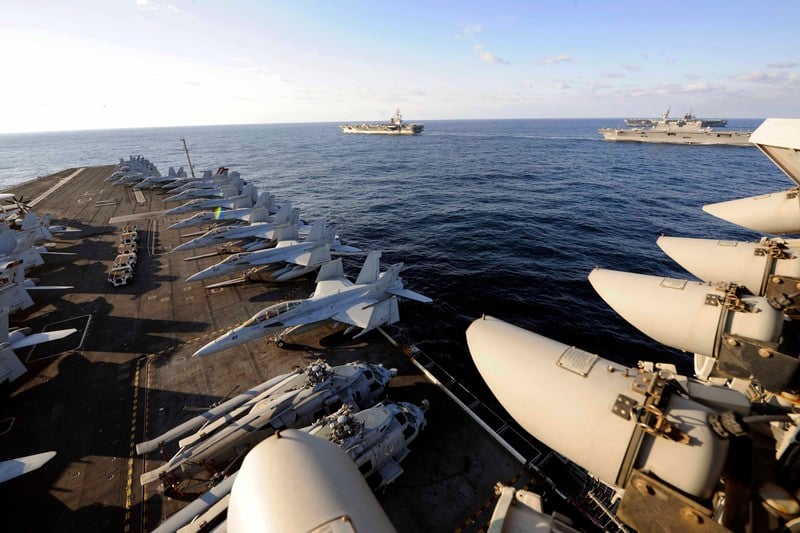 Much has already been said on this subject. Both Americans and Russians. The truth, as always, is somewhere in the middle. But what is happening today in our army in terms of re-equipment, actually makes us somewhat rethink the understanding that has developed over the years.

11 US aircraft carriers with their almost 1 000 airplanes and helicopters is a really impressive force. Able to bring war (theoretically) to the territory of any country. In practice, everything is not so beautiful.

AUG is not a small target. This is a warrant of one to two dozen ships. Yes, there have been cases of “loss” of AUG, but this is more a part of the half-a-billdote.

In general, the AUG is dangerous on 100% for those countries that have nothing to oppose to the strength of the group. Countries whose military potential is comparable to the Yugoslav or Libyan countries, of course, can only “pinch” the AUG.

But when it comes to those countries that are armed with sufficient means of response, both quantitatively and qualitatively (Russia, China, India), the alignment changes.

Indeed, is AUG so terrible, how are we drawing it in the very near future? If you look at the classic composition, then yes, it looks impressive.

The flagship of the Nimitz or Ford-type aircraft carrier grouping with a deck regiment based on it aviation (60-80 aircraft and 10-12 helicopters).

The air defense division of the grouping is a 1-2 cruiser of the Ticondeur type. All Ticondeur-type cruisers are equipped with the Aegis Marine Management Complex (AEGIS) and Standart SAM systems (SM-2, SM-3), which are very modern. weapons. Some cruisers may be equipped with installations for launching Tomahawks.

3-4 destroyers of the Arly Burk type with depth charges and torpedoes to fight enemy submarines are responsible for anti-submarine defense, and some can also be equipped with Tomahawks.

AUG can also include in its composition and submarines of the type "Los Angeles" with torpedo armament and "Tomahawk" (with the launch through torpedo tubes).

Plus supply vessels. Up to 8 transports, tankers and other ships.

Overall, 14-15 ships. Pretty impressive goal, which is simply not able to quietly go somewhere. At least not in modern conditions.

I remember how in our youth we were frightened by these aircraft carriers. They say they will come and bring us war. And the States will sit there overseas. Well, about the thousands of missiles, cruise and conventional. Then the "Pershing" in Europe still stood.

But over time, understanding of the situation became more and more. It became clear that aircraft carriers are being created today in order to impose democracy on small and mostly defenseless states, examples have already been cited.

It is difficult to say whether the plans of the American command include the promotion of an AUG (or several) in the region of Kamchatka or the Kola Peninsula, but today such a strategy will surprise.

In general, if according to the mind, in the case of "what" all US aircraft carriers will not have to fly in full steam to the shores of Russia, but on the contrary, to drop as far as possible from them.

I am not an expert, but the logic of today's time simply does not allow us to imagine an attack on Russia with the help of aircraft carrier aircraft. This is too risky and (not least) expensive.

There is an opinion in expert circles that aircraft carriers as a means of fights between superpowers are somewhat outdated. And the matter is that, first of all, new weapons systems with which AUG cannot oppose anything, and secondly - again money.

Still, the aircraft carrier (since the Second World War) is a very fat target. And very expensive.

Nikita Khrushchev, who was criticized a lot for distortions, nevertheless hit the army hard and the fleet, deciding that you can fight only ICBMs. However, what we have today is surprisingly reminiscent of the Khrushchev era.

Yes, the fleet is like the American one. It is a fact. VKS quantitatively also inferior to the US Air Force. Also we will not argue.

But since we are fighting on our territory, we still have what? That's right, air defense for airplanes and missiles for ships. In addition to the capabilities of the fleet and VKS. And one more thing in the stash.

The rocket began to be made this year, and in 2018 will begin to enter service.

And, of course, "Caliber" in all guises. Yes, it flies not so fast, but far away.

The most clever thing that the Russian designers could only do was to unify the launch containers. "Zircon", "Caliber", "Onyx" - no matter what. More precisely, what will be at hand, then run.

Yes, "Onyx" also should not be discounted.

Given that all three products exist in the surface, underwater and aeronautical variants, the breadth of application possibilities is impressive.

This is especially true of the hypersonic Zircon, which has already caused an unhealthy revival in the stalls. This refers to the October proposal from Great Britain (naturally, jointly) with the USA to Russia and China. Gentlemen have suggested abandoning the development of hypersonic weapons.

A certain report was presented in which the hypersonic weapon was recognized as a threat capable of starting the World War III on a par with the nuclear one.

It is clear that if such a weapon would appear to the British or Americans, then it would serve exclusively the cause of peace and stabilization. But Russia and China, of course, can only use it for aggressive purposes.

The American magazine National Interest, whose materials we often pay attention to, called the Zircon rocket a serious challenge for the US Navy. The Americans also noticed that the rocket is quite versatile, so not only Russian naval ships, but also other types of armed forces can use the Zircon.

Yes, “Zircon” can start from almost any platform: from cruisers, frigates, corvettes, boats. With nuclear and diesel electric shock submarines. You can start with Tu-160, Tu-95 and Tu-22М3 bombers, Su-34 fighter-bombers and even Su-35 and MiG-35 fighters. In the end, this rocket can be based on the shore.

As well as a carrier may not necessarily be a cruiser or a submarine, but even an ordinary cargo ship with an installed container.

The latter, of course, did not make Americans happy.

But - they made it up themselves, and be upset.

But what most puzzled American experts was the price. 1,5-2 million dollars depending on the modification. It has already been considered that heavy injuries can inflict "Zircons" 7-10, both at the expense of the warhead, and at the expense of its own kinetic energy. 6M is a lot. Although one rocket, pierced the side and got into the gas storage facility will be more than enough for a show with special effects.

And, as American experts note, today the US Navy is virtually unable to oppose anything to Zircons. The chance of interception even by modern complexes is negligible.

Perspective, if 10 "Zircons" (worth 20 million dollars), caught in the aircraft carrier "Gerald Ford" (worth 12,8 billion dollars), will bring it down, for some reason extremely negative effect on the Americans.

Whether the price does not suit the rocket, and the US Navy aircraft carrier must be picked with products worth tens of millions, or the fact that if it is launched, it will definitely fly.

A lot of experts said that the Zircon rocket marked the end of aircraft carriers as platforms for modern warfare. Of course, a bit premature.

Carriers are still the perfect tool to frighten, threaten, intimidate and attack. For those who can not adequately respond.

So for a long time aircraft carriers have quite a normal future for themselves. Yes, from the point of view of morality, it stinks slightly, but there's nothing to be done about it. It happened historically, thanks to the glorious US Navy.

I am very pleased that in the United States they seriously think that Russian missiles pose a serious threat to the instruments of attack of the Americans. And that the appearance in the zone of action of our missile systems can entail a very tangible impact on both US property and reputation.

Today, maybe not by 100%, but in the near future, our army and navy will be able to fully protect themselves from any possible aggressions by the very same US Navy AUG, which has been a scarecrow for the whole world for a long time.

Russia has indeed made a huge step towards full security in the very industry that has always been difficult for the United States. Our missiles are far superior to all the potential ones possess. C-300 and C-400, "Onyx", "Caliber", "Iskander", "Zircon" - the whole complex of defense is able to resist the desire of any AUG to visit our waters.

Naturally, AUG will remain a significant force. In addition to the usual functions of the impact on the country, "demanding democratization," aircraft carriers can be a shield, a floating airfield on the approaches to the borders of the United States.

Another question: who needs the “menacing forces” to go to these very borders?

But the main thing is to forget about our borders. For the first time. And then we'll see.

Ctrl Enter
Noticed oshЫbku Highlight text and press. Ctrl + Enter
We are
Reports from the militia of New Russia for 27-28 September 2014 of the yearResults of the week. "Well, do not change me because of every idiot!"
Military Reviewin Yandex News
Military Reviewin Google News
242 comments
Information
Dear reader, to leave comments on the publication, you must to register.