November 20 2017
18
By the beginning of this campaign, the Russian active army was at the height of organizational and material development, including the 158 infantry and 48 cavalry divisions, the 5 infantry and 4 cavalry brigades and a large number of special and technical units on the Austro-German front.


In technical terms, the troops seriously increased, in particular - the proportion of heavy artillery increased. A TAON corps appears (at the beginning of 1917 - 338 120 units - 305-mm guns), which has become a powerful strike fist in the hands of the command. The troops are saturated with mortars and bombs.

The situation with ammunition in the 1917 campaign in relation to shells of light and medium calibers was satisfactory (see The evolution of ammunition supply to the First World War).

Army has grown significantly aviation (for example, in the Summer Offensive, the South-Western Front was supported by 38 air squads - 226 aircraft).

By the beginning of the campaign, the enemy had 133 infantry and 26,5 cavalry divisions on the Russian front - in addition to the traditionally powerful Austro-Hungarian group, the German contingent had also grown significantly.

But, despite the organizational and technical growth, the Russian troops were in for a heavy blow - after the February Revolution, the moral and ideological state of the army began to fall rapidly. We wrote about the trends of this process (The last spurt. The June offensive of the South-Western Front 1917 r. 2. Russian army: the power of technology and weakness of spirit).

As a result, by the beginning of the summer campaign, Russian troops had largely lost their combat effectiveness and controllability - and this left a significant imprint on the course and outcome of the 1917 campaign. 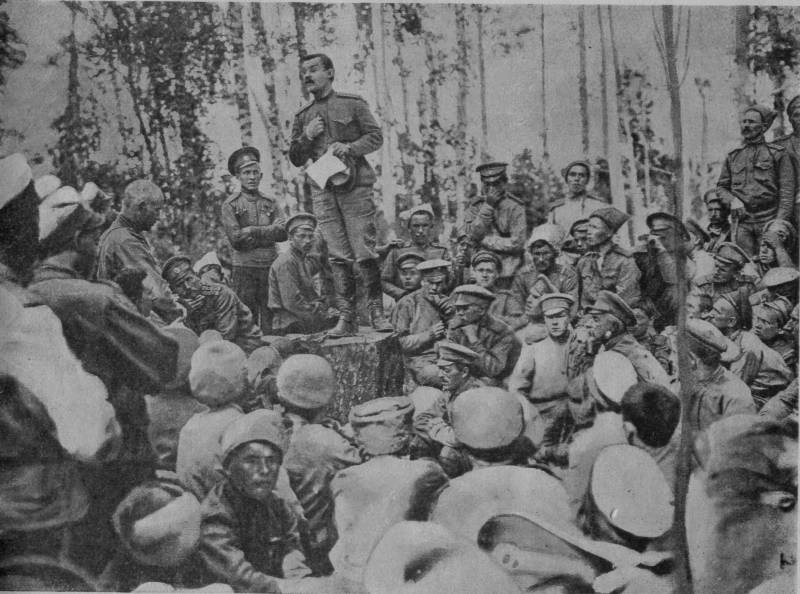 1. Rally at the front

The strategic campaign plan developed in December by 1916 by the acting chief of staff of the Headquarters General of the Cavalry V. I. Gurko and the Quartermaster General of General Headquarters of General Lieutenant A. S. Lukomski provided for the transfer of the main efforts to the Romanian theater. On the remaining fronts, the Stake refused from large-scale operations. The Supreme Commander and Commander of the Southwestern Front supported the plan, while the commanders of the Western and Northern Fronts opposed it. As a result, the adopted plan was a compromise, and the main blow took place at the Galician theater of war (see The last spurt. The June offensive of the South-Western Front 1917 r. 1. Plans and prospects).

In the 1917 campaign, Russian troops operated on the Baltic-Belarusian, Galician, Romanian, Caucasian, and Persian theaters.

This theater, which covered the strategically most important areas, was occupied by troops of the Western and Northern Fronts. Of particular importance were the Dvinsk and Jacobstand bridgeheads - Russian troops on the left bank of the r. The Western Dvina shackled a large number of German troops.

The 5 Army of the Northern Front 8 - 11 July we wrote about the attack on the Yakobshtadsky direction in one of the articles (see Baltic Front of the First World War. Jacobstadt, 1917 year).

The situation was traditional for the 1917 campaign: a perfectly technically prepared offensive was stopped due to a drop in the combat capability of the army infantry. Tactical successes did not develop, and the assault and assault units died without the support of the bulk of the troops. Losses of the 5 Army - up to 13000 people. 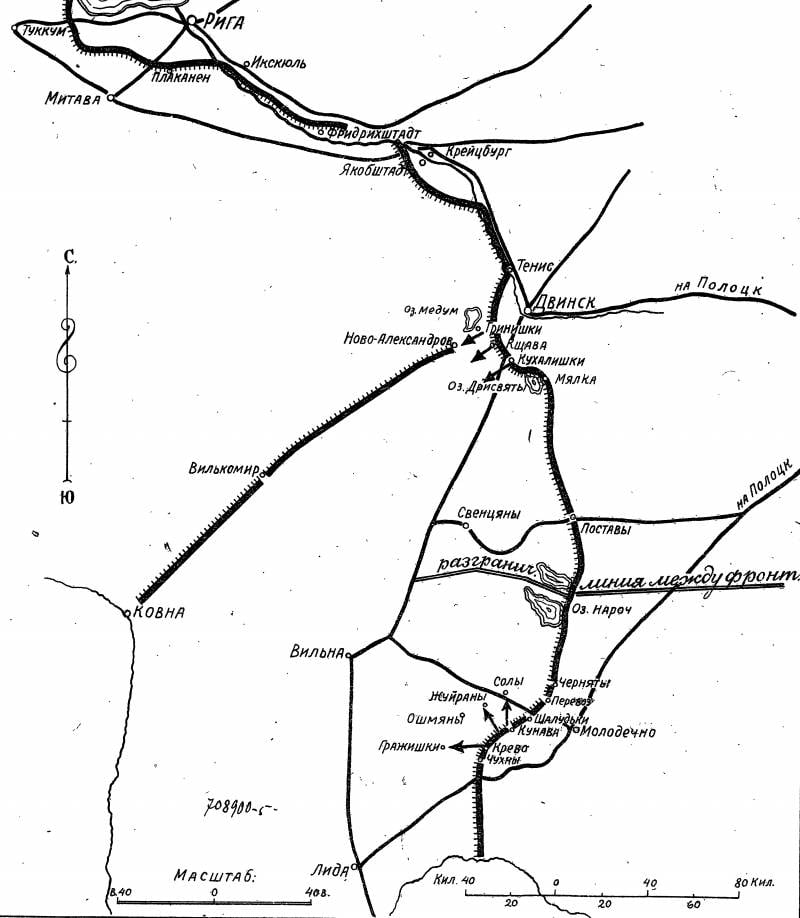 As part of the summer offensive on the theater of operations, the 10 Army of the Western Front was active, and on July 9, July 10, advancing on Vilna-Krevo. For the above reasons, it was also not possible to develop the achieved tactical success, and the army lost up to 40000 people.

In the course of the defensive Riga operation 19 - 24 in August, the 12 Army of the Northern Front opposed the German 8 Army attempting to capture Riga and the Baltic coast with the prospect of a further attack on Petrograd. Planned operation on the environment of a large group of Russian troops. Connections 8-th army were to force the river. Western Dvina in the area of ​​Ikskyla and develop an attack on Ikskyul, Rodenpoys, Hinzenberg. The troops of 12, defending the Riga bridgehead, which covered the shortest direction to Petrograd in the theater of operations, were weakened both by the last stage of the disintegration of the troops and by the lack of personnel. During the operation (see Baltic Front of the First World War. Riga operation 1917 g) despite the unprecedented firepower of the enemy, the use of chemical munitions and new tactics by the Germans, the Russian troops (even with the decomposition of a large part of them) fought steadfastly. But, not having exhausted all defensive capabilities, the command of the 12 Army on the night of August 21 ordered to leave the position on the r. M. Egel and retreat.

The enemy acquired the Riga bridgehead, but the 12-I army escaped from the intended environment. The losses of Russians and Germans are 25000 (mainly due to prisoners) and 5000 people, respectively. This ratio of losses was influenced not only by the condition of the Russian army, but also by the fact that the artillery (the type of troops that inflicted the greatest losses on the enemy) of the 12 Army was neutralized by the Germans with chemical munitions before the onset of infantry. Pulling up new fire weapons and maneuvering reserves in an atmosphere of revolutionary chaos was extremely difficult. 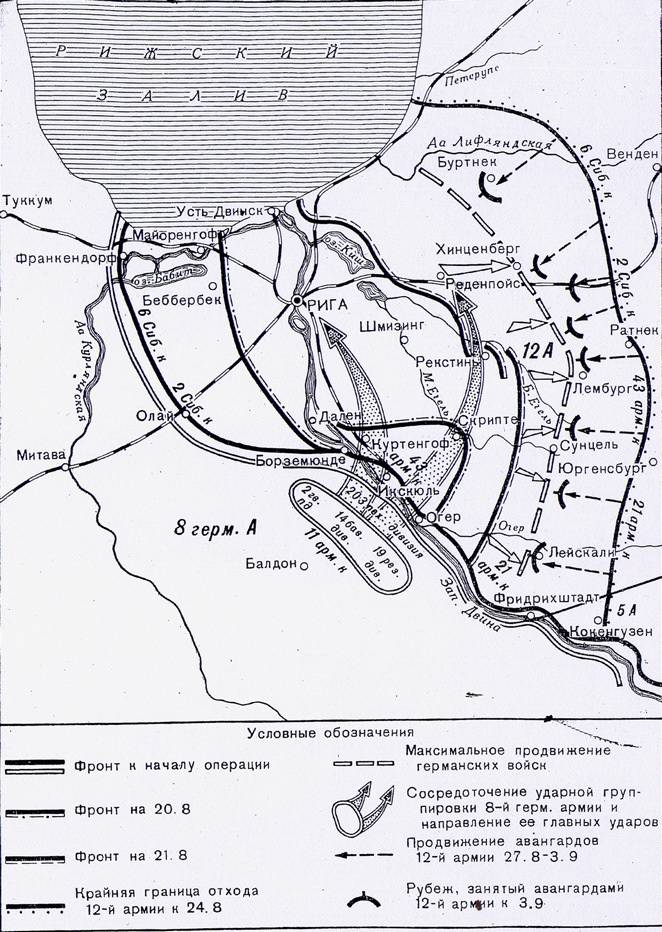 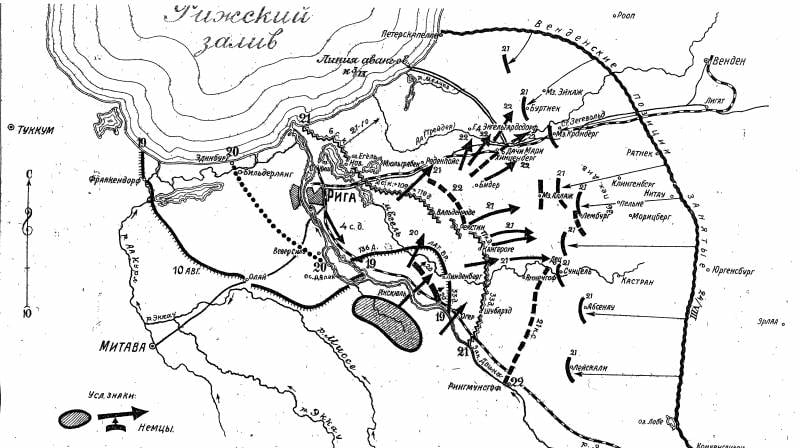 During the last major operation on the Eastern Front of the First World War, the combined ground-sea Moonsund operation September 29 - October October XNUM (held on the right flank of the theater) (See Moonsund. Part of 1 ; Moonsund. Part of 2a) German grouping, much superior to its opponent (more than 300 German ships and ships, including 10 newest battleships against half the size of the Russian ship group, including 2 of old battleships; 102 Germans against 36 Russian planes), managed to force out Russian forces in Finnish bay The resistance of the Russian troops was of a focal nature, and the defensive capabilities of the positions handed over were far from exhausted. The enemy occupied the islands of Dago, Ezel, Mawn, and the German fleet broke into the Gulf of Riga. 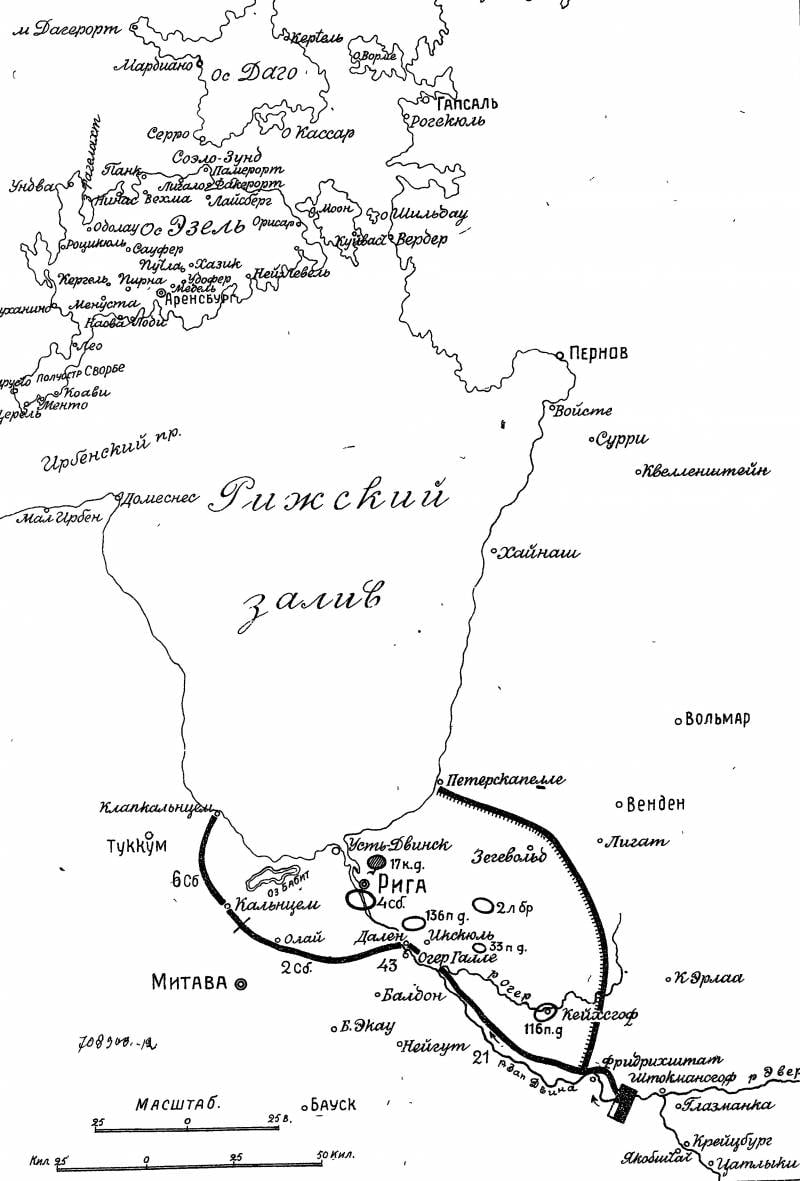 4 schema. The general scheme of the right flank of the Baltic-Belarusian theater. Strategic essay. H. 7

Traditionally strategically secondary, during the second half of the 1917 campaign, the Baltic-Belarusian theater was of key importance. The failures of the Russian troops and fleet during the Riga and Moonsund operations, they led to a serious change in the strategic situation on the right flank of the Russian Front, taking the enemy to the starting position for a decisive throw to Petrograd. 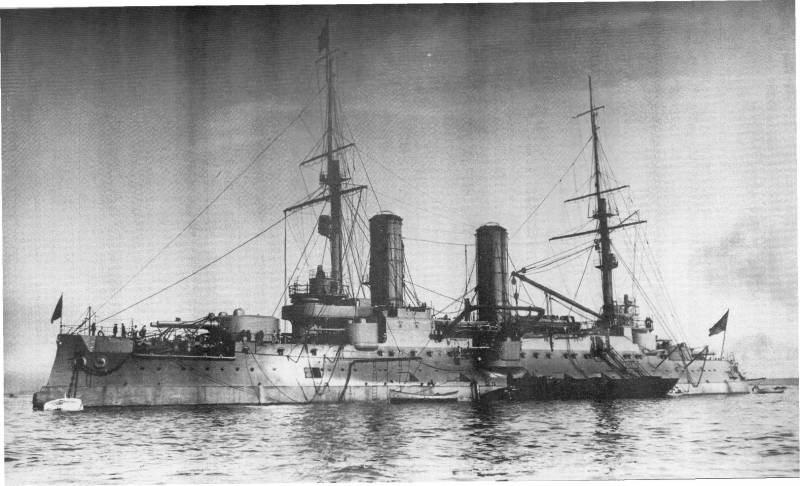 2. The battleship "Citizen", a member of the Morund operation