Air show and car show in Dubai 2017. Not bread, but sights

November 17 2017
21
The day before, in the United Arab Emirates, in Dubai (I hope professional linguists do not strike out for such a decline), exhibition events as part of the “High Week” ended aviation fashion. " In parallel with the Dubai Air Show in the UAE, an exhibition of automotive equipment was held with both retro-copies and hypercars of a futuristic appearance.


On what you can fly or ride, and on what you can not do this - not only mega-experts, professionals, but also ordinary visitors decided. We also decided for how much you can buy / sell equipment presented by hundreds of different companies from all over the world. Russia was among those countries that showed their products not only in statics, but also in all their glory against the background of the cloudless sky of the Emirates.

What should be noted separately is the fact: a live broadcast from dozens of exhibition sites was organized from the UAE, so that not only those who found themselves in Dubai on these November days but also people like you could see the static samples or aerobatics. - located thousands of kilometers from the exhibition "epicenter".

So, with what did the representatives of our country come to the UAE?

The United Aircraft Corporation presented at the air show a domestic aircraft Be-200ES in specialized coloring of the Ministry of Emergency Situations. 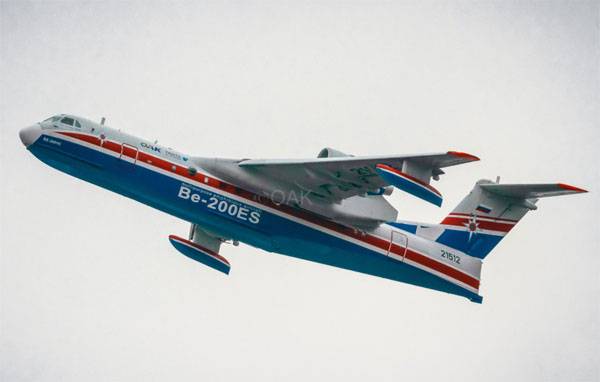 During the presentation, the audience was focused on the fact that fires in different parts of the world cause enormous economic damage. To reduce this damage, potential customers were asked to spend funds on the Be-200ES order (also known as Be-200ЧС) - several million dollars as opposed to the several billion dollars that will have to be invested in the restoration of natural areas and infrastructure facilities after fires. If the offer to the Arabs did not cause much excitement, then the representatives of Europe and Southeast Asia really appreciated the KLA proposal. 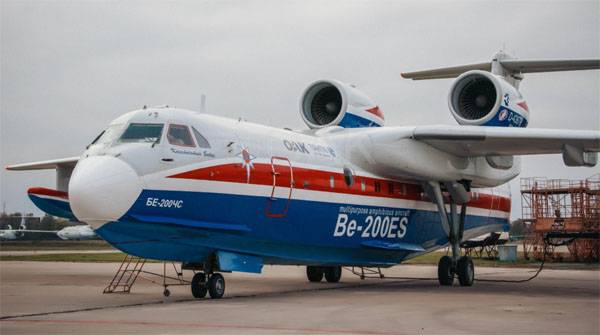 The main thing: a combination of maneuverability, amphibious properties, efficiency of water intake on various types of water bodies, the use of water masses taken on board, and most importantly - the prices. Today, among the foreign operators of various modifications of the Be-200 are China, Indonesia, Azerbaijan. The Philippines and Vietnam are actively eyeing. Previously, the Spaniards and the Greeks were going to take a closer look, but those and others now have problems with the "gold reserve", in addition the Spaniards are subordinate to the "toxicity" of Russia - supposedly we "arranged" the Catalan referendum. Are we fires too? ..

Forced the visitors of the air show in the UAE to open their mouths aerobatics of the newest Russian multipurpose fighter Su-35. 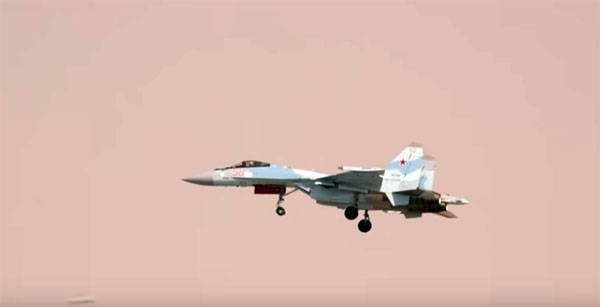 "When I was told about what this Russian car can do, I was surprised, but when I saw it with my own eyes, I understood exactly what a real surprise is. It's kind of fantastic! Su-35 demonstrates extraordinary maneuverability in daily flights In Dubai", - one of the visitors to the air show talks about his impressions of the capabilities of the Su-35.

From comments (translation from English):
Lockheed Martin cries whenever Su appears in the air. And shouts - "more sanctions."

Added "fire" test pilot Sergei Bogdan, noting that the Su-35 "can afford almost everything." And indeed, the figures shown in piloting are the best proof.

Among the rave reviews in the style of "Wow!" and "Wow!" there are also those in which cautious or quite “burning” criticism is expressed. Here is a comment with a combination of delight and critical evaluation (translation from English):

A very maneuverable fighter, but it is unlikely to be of any importance in modern air combat, since the air forces of all leading countries have BVR long-range missiles.

That is, in the UAE, there was a field for discussion about the possible opposition of the maneuverability indicators of a modern fighter to a rocket fired at it. The discussion continued during the performance of Russian aerobatic teams. In the sky over Dubai showed their skills and capabilities of the Russian aircraft "Russian Knights".

At the air show, Russia also offered a presentation of the Su-57, to which increased attention was not only in the Russian Federation itself.

A separate part of the Dubai Air Show - drones. One of the nails of the exhibition program was the unmanned "Chinese" from the Aviation Industrial Corporation of China (AVIC). It is about Wing Loong II, which, as stated, has a shock (missile) potential and is capable of launching coordinated by an automated system of "markers" ("shock points") - via satellite channels. Photos from the display of the entire possible arsenal of the Chinese drone drone: 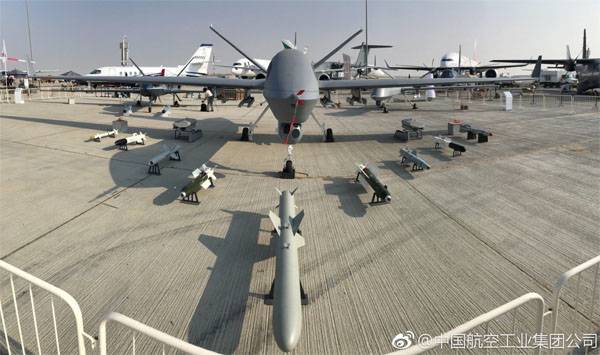 Useful combat load - up to 480 kg. Flight time limit is 20 h. This is declarative. The flight was carried out at an altitude of 9 thousand meters with a maximum speed of about 370 km / h.

In the photo below - point-camera. You can see the presence of a joystick for control, as well as a touch screen on which you can set certain flight parameters and combat readiness: 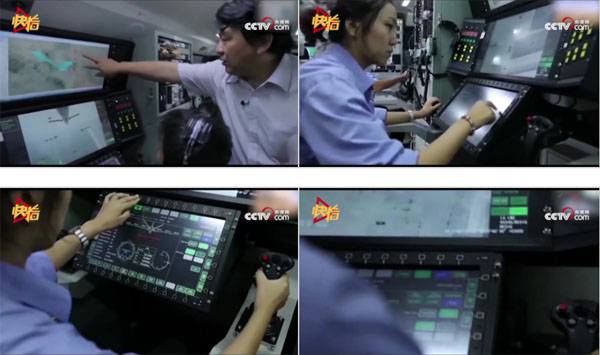 You can also see the screens that display the image from the cameras of the UAV itself.

By the way, China even before the next air show managed to sign a contract for the supply of this drone. According to some information, the Saudis put their signatures on the contract paper at a time when the Chinese did not even manage to bring to mind a prototype. It is known that interest in acquiring Wing Loong II was also expressed by Egypt and the UAE. But for the first time this UAV took to the air only at the beginning of the 2017. The Chinese themselves did not expect to see such trust themselves.

Introduced your UAV and Russia. This is SKAT 640 4G TERRA from OOO "System Skat". The same SKAT, which in May of this year during the test over the Himalayas set a record height for this class of aircraft. Flying around the highest point of the planet - Mount Chomolungma (Everest), he climbed to the height of 9333 m. UAV belongs to the class of "flying wing", equipped with an electric motor. 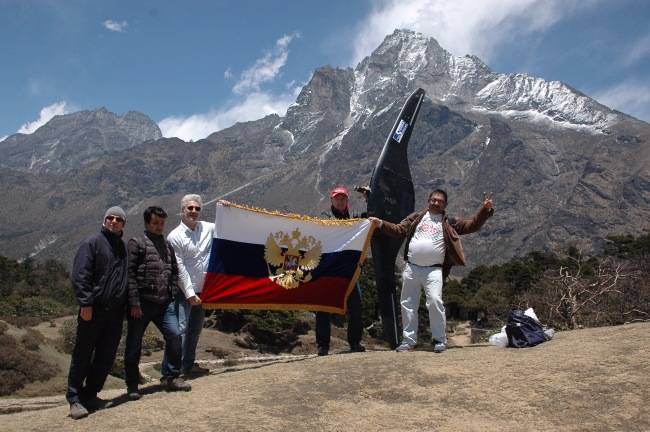 And now we are literally descending from heaven to earth - and a few words that in the near future they are going to launch not on the sky, but along the roads. What is called, only "hardcore" from manufacturers. And already at the autoshow in Dubai.

Meet Devel Sixteen with Power That Envy Tanks... for it is 5000 horsepower! The maximum speed is 511 km / h. That's the thing for the Arabian open spaces ... The complete feeling is that Darth Vader will come out of this (the language does not rise to call him a car) ... 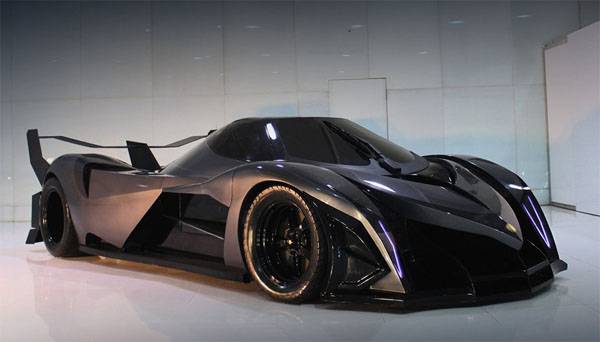 You can not look for a wheel, for what self-respecting hypercar today with a wheel? .. 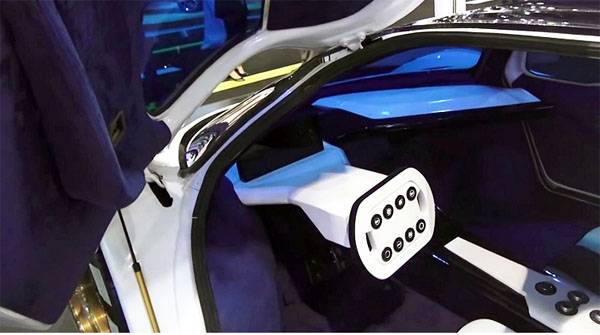 In principle, Darth Vader could get out of any of the "cars" presented. For example, from "Devel Sixty" (not to be confused with "Devel Sixteen") with the wheel formula 6х6 and not less incredible characteristics of power, engine volume, torque and "all-all." 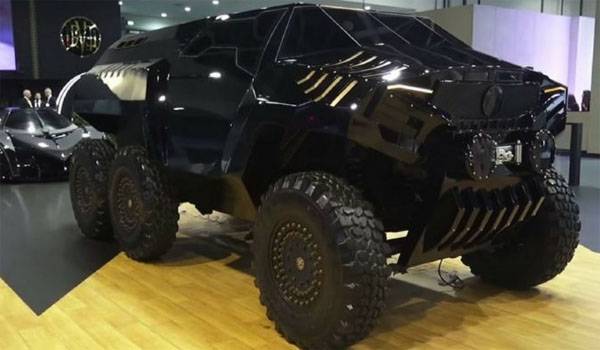 Planned "budget" option for half a million dollars with limited power "total" in 1,2 ths. Hp A sort of option "Alien vs. Predator" on wheels.

Or from the fierce Karlmann King hand-built with a 400-strong 6,8-liter engine: 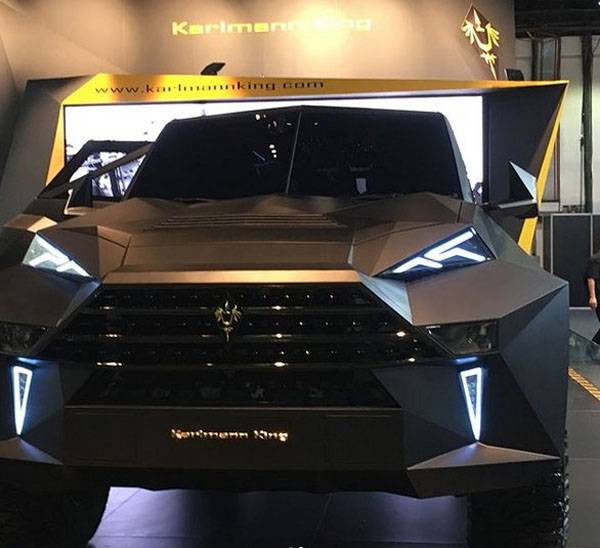 China could not resist and, selling its unfinished drone drone to the Arabs, decided to order nine such machines to celebrate. Apparently, not enough adrenaline in the Middle Kingdom - they want to ride with the wind.

In general, the air show and car show in the UAE is a colorful mosaic of vital, just useful, and also beautiful useless, where everyone wants to make money or spend money so that later there is something to remember.