By command from the USSR 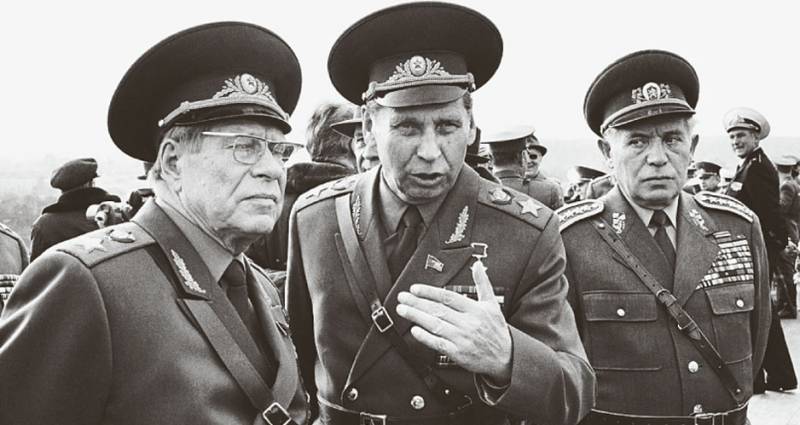 Few modern military observers, analysts and analysts will remember who the Soviet military hierarchy was Marshal of the Soviet Union Nikolai Ogarkov and what he did for the Soviet army. Meanwhile, the influence of his ideas on the development of not only the SA, but also the modern Russian Armed Forces is difficult to overestimate.

It was in the middle of the 80-ies that the foundation of modern military reform was laid. But if in Russia only a limited circle of specialists remembers Nikolai Vasilievich, then in many foreign specialized publications in publications devoted to our military reforms, such a thing as “Heritage of Ogarkov” appears. Let's try to figure out what it is.

30 October marks the 100 anniversary of the birth of Nikolai Vasilyevich Ogarkov. During his military career, he passed a difficult path from a regimental engineer to the Chief of General Staff and Marshal of the Soviet Union.

What is particularly noteworthy, Ogarkov is not a combined-arms officer, although in 1938, he entered the infantry school, but was quickly transferred to the Military Engineering Academy. And for a long time after its completion, he held various posts related to fortification. Such a career is not typical for the Soviet and Russian army. The leading posts in the General Staff and the Ministry of Defense are occupied mostly by the combined officers.

At the end of 70-x - the beginning of 80-x Ogarkov began to develop the concept of "Strategic offensive operation in the theater of operations." Behind a rather cumbersome title was the revolutionary change in the views on modern warfare.

First, according to its developers, the role of nuclear weapons decreased, its place began to occupy high-precision. Secondly, it was predicted that even large-scale collisions would be very fleeting. Therefore, strategic operations must be carried out simultaneously on the entire depth of theaters of operations. Conduct such operations should, if we speak in modern language, diverse groups of forces and means. Third, for conducting combat operations, commands are needed that control all the forces and means in the theater of operations, including the navy, air force and airborne forces.

The formation of a new concept was preceded by several large-scale maneuvers, including the operational-strategic exercises "West-81", which became one of the most extensive checks of the Soviet army for all history.

In 1984, the “Strategic Offensive Operation in a Theater of Military Operations” was approved. Later, from foreign experts, it was called the “Ogarkov Doctrine”. In addition to the concept of an offensive operation, the marshal developed a complex, multi-stage reform of strategic nuclear forces, missile defense, and the Space Forces. In general, Nikolai Ogarkov launched a complex and very ambitious military program, which, apparently, was planned to be completed by the middle of the 90-s. But the collapse of the USSR placed its implementation.

In a single package

The Ogarkov Doctrine provided for the formation of separate army corps (UAC). These associations should have been highly mobile and fought deep behind enemy lines. The main strike force of the KLA became separate motorized rifle and tank brigades. Two corps - the 5th and 38th - did not exist long enough and after the resignation of Nikolai Ogarkov they were reorganized into ordinary divisions.

You might think that the leadership of the SA considered such associations unnecessary toys. True, an analysis of the articles and memoirs of former officers and generals of the Soviet army shows that the concept of individual corps has been changed. As a result, the KLA was too cumbersome, the superstructure in the form of corps command was reduced, and the brigades became independent. According to another version, the reason for abandoning this idea was that a strategic tool with the ability to continuously advance at a distance of hundreds, or even thousands of kilometers, was considered excessive. Therefore, the place of the corps in the concept and took a separate brigade.

In addition to the KLA, the creation of tank and motorized rifle divisions with increased firepower and maneuverability was envisaged. Instead of the usual three motorized rifle (tank) and one tank (motorized) regiments in the new compounds were two tank and two motorized rifle. Such units, which received the nickname “divisions of the 21st century” in the army, should have been mixed combat groups.

In the theater of operations, the fighting should have been as follows: the usual motorized rifle and tank divisions provided for hacking into the enemy’s defenses, and the formations of the 21st century, due to their higher maneuverability, were a breakthrough, quickly defeating enemy reserves, and took advantageous positions. After that, separate army corps entered into battle (after their disbandment, separate brigades). In the defense, “divisions of the 21st century” and separate corps-brigades acted as original fire brigades.
If you look at the history of reforming the Armed Forces of the Russian Federation, then attempts to return to the triple scheme were made several times. Moreover, in one form or another, such a concept has always been present in the plans of military reforms since the beginning of the 90s.

For the first time, Defense Minister Pavel Grachev began to form separate brigades. According to available information, this was done in continuation of the military reform initiated by Ogarkov. But the worst economic crisis did not allow to realize the plans.

The second approach was undertaken when General of the Army Yuri Baluyevsky became the chief of the General Staff. One tank and two motorized rifle divisions were transferred to the staff of the “XXI century”. The composition of the individual brigades formed under Grachev was also changed. But this time, too, the reform did not work out - a “new look” announced by then-Minister of Defense Anatoly Serdyukov happened.

Currently, the third and most successful attempt to implement the reform of Marshal Ogarkov is underway. In particular, the 150 Motorized Rifle Division has already been transferred to the staff of the XXI Century - in the newly created compound there are two tank and two motorized rifle regiments. According to some reports, in the near future a few more connections will follow. Despite the return of divisions, separate tank or motorized rifle brigades remain in each combined arms army.

If we turn to the press releases of the Russian Ministry of Defense, as well as the official publications of the military media, almost everywhere the terms "interspecific group" and "heterogeneous group of forces and means" are found. Work on the maximum possible interaction of forces and means of various types and genera of the Armed Forces in the theater has been conducted since the beginning of the 2000's. It was to create interspecific and heterogeneous groups in the period of the "new look" that the old military districts were disbanded, and strategic commands were created in their place. Despite the resignation of Serdyukov and the course taken by the current leadership of the Russian Defense Ministry to dismantle its reform, the new military districts remained.
Meanwhile, as in the case of brigades, the Ogarkov Doctrine is at the heart of the formation of new districts - the joint strategic commands (USC). It was the USC that was given an important place in the renewed structure of the CA. In 1984, four main commands were created - Far East, West, South and South-West, which were subordinate to the military districts that fell into their area of ​​responsibility. In many publications, the formation of the Civil Code was called an attempt to create an unnecessary managerial superstructure and even a way to squeeze out additional general's posts from the country's leadership.

However, the reform of the military command was more difficult. At the first stage, it was planned to create a chain of General Staff - the main command - the military district. At the second stage, only the function of mobilization deployment and preparation of the reserve was left to the district command. On the third, the command of the districts was reduced to separate mobilization directorates, and at the same time, the subunits, formations and military units of the families and types of troops that were on its territory completely subordinated to the main command.

The headquarters of the Civil Code actually became a miniature General Staff - in its structure were represented departments and offices responsible for planning the combat work of the Navy, Air Force, Airborne Forces. The reform was planned to be completed by the beginning of the 90s, but the USSR collapsed, the changes stopped at the first stage. And later GK were disbanded.

As in the case of brigades, several attempts were made in the Armed Forces of the Russian Federation to form joint strategic commands. In particular, Yuri Baluyevsky was able to decide on the formation of a strategic command in the Far East. The Siberian and Far Eastern Military Districts, the Pacific Fleet, as well as some units and formations of the Volga-Ural District were subordinated to the UK.

We must pay tribute to the current leadership of the Armed Forces of the Russian Federation, who managed to maximally realize the idea of ​​USC. The teachings of interspecific and heterogeneous groups of forces and means are now commonplace, and the interaction between the clans and branches of the Armed Forces is well established and has become a common practice. As part of the current military districts, special territorial commands have appeared, which are entrusted with the task of preparing mobilization resources and a reserve, as well as carrying out rebuilding.

An important place in the Ogarkov Doctrine was given to the reform of the Strategic Nuclear Forces, the missile defense and the Space Forces. This part of the CA global changes was very poorly covered; references to plans can be found in rare publications and memoirs.
The idea of ​​Nikolai Ogarkov was to create a unified strategic forces. In their composition there should have been two components - Strategic Nuclear (SNF) and Military Space Forces (VKS). As in the case of USC, the formation of strategic forces took place in several stages.

On the first created VKS. Their task is to warn about a missile attack, missile defense, control of the orbital group. At the second stage, it was planned to merge the VKS and SNF. In the third, all strategic air and sea bases were transferred to the subordination of the new structure.

As a result, by the year 1993, the USSR was to receive joint strategic forces, which, acting under one leadership, could simultaneously detect and repel the attack, and then defeat the enemy. It is noteworthy that this was the path taken in the United States, having formed its single strategic command in the middle of the 90.

At present, the Aerospace Forces are formed in the Armed Forces of the Russian Federation, and the ideas proposed by Ogarkov back in the middle of 80's are visible in the current VKS: let's say, a single missile defense system, SPRN and Space Forces. True, the topic of the SNF remains one of the most closed in modern Russia, so it is hardly possible to find out whether the formation of common strategic forces is under way. It is possible that such work is underway.

The Russian military-political leadership has repeatedly tried to resume the reform of Ogarkov. For a long time, the consequences of the collapse of the USSR prevented this from happening, but today's transformations were in the intended, Soviet direction. The ideas proposed by Nicholas Ogarkov 30 years ago, have found application, albeit in a slightly modified form.

Ctrl Enter
Noticed oshЫbku Highlight text and press. Ctrl + Enter
We are
About Stalin and KhrushchevWhat you didn't want to know about England
Military Reviewin Yandex News
Military Reviewin Google News
20 comments
Information
Dear reader, to leave comments on the publication, you must to register.