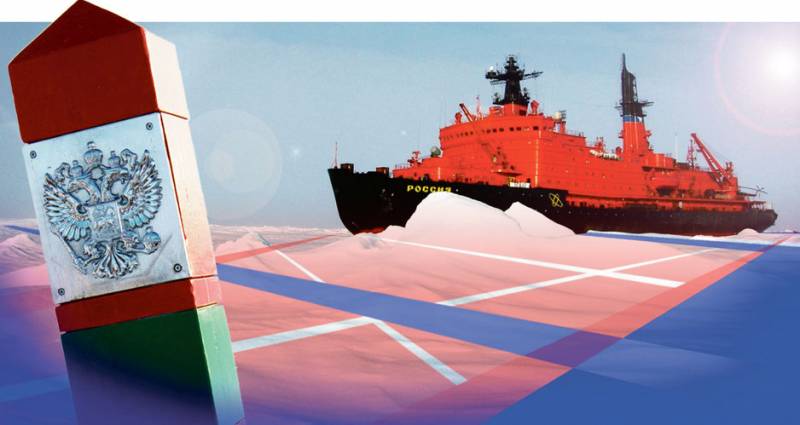 In 30-ies, at a meeting in the Kremlin, Stalin spent on the map a huge arc from Murmansk to Cape Uelen in Chukotka and said: "This is our national territory," reminds the famous polar explorer Arthur Chilingarov.

In accordance with the decree of the Central Election Commission of the USSR 1926, the state border of Russia closed at the North Pole and ran along the lines of longitude to the middle of the Bering Strait in the east and to the point of the land border with Norway in the west. The foresight of Stalin, who has saved a hydrocarbon storeroom for future generations, can only be admired, which is not the case with the 90 leadership. In 1997, Russia ratified the UN Convention on the Law of the Sea, thus repealing the aforementioned CEC decree. Such a decision by the Yeltsin team looks at least ambiguous from a moral, economic and military point of view. Moreover, the United States, unlike Russia, did not join this convention. Americans defend their national interests, not paying attention to international norms, especially when they contradict their interests. The signature of our country caused a flurry of claims to the Arctic. For example, Canada submitted an application to the UN to expand the territory of its Arctic shelf on 1,2 a million square kilometers, hoping to get the North Pole with the shortest air route between the US and Russia. With a decrease in ice cover, NATO has the opportunity to strike with cruise missiles from the Arctic Ocean throughout the territory of our country, as well as to use land forces in this region. At the beginning of 2000, the United States Naval Ministry adopted a special “Arctic Navy Action Plan”, which states that the United States has broad and fundamental interests in the region.

Tension in the Arctic continues to increase. According to the commander of the North fleet The Russian Navy, Vice Admiral Nikolai Evmenov, who spoke at the first meeting of the State Duma Expert Council on legislative development of the Far North, the USA, Norway, Canada and Denmark, seek to reserve the maximum rights for themselves as soon as possible. The possibility of protecting their interests by means of armed struggle is considered by them as an integral part of the general Arctic policy. Often more persistently than traditional players, economically developed countries that do not have direct access to the circumpolar region: Japan, China, South Korea, are tearing into the region to its resources and transport highways. Since 2004, the so-called Asian Forum for Polar Research has been operating. It involves China, Japan, South Korea, Thailand and Malaysia. The Chinese icebreaker "Xuelong" ("Snow Dragon") passed along the Northern Sea Route. The drift of the international station on the German icebreaker is planned for 2019. So far, the scientific cooperation of the states in the study of the Arctic is friendly. However, under certain conditions, this does not exclude competition.

Nikolai Evmenov indicates that the list of claims by the states of the Asian Forum and NATO to the Arctic is quite wide. The main positions are to hinder Russia in its desire to expand the boundaries of the sovereign continental shelf in the Arctic Ocean, give international status to the Northern Sea Route, oppose us in developing oil and gas fields, and develop the Arctic resources unhindered, as well as strengthen NATO’s military activity in the region. “The actions of the subarctic and other states to exert political pressure on Russia, as well as the buildup of economic and military presence in the Arctic objectively require us to take measures to protect national interests,” the commander of the Northern Fleet summarizes.

The question arises: how adequate are the legislative measures to counter this pressure? Is it possible to repeat the stupidity perfect in 1997 year? The question is not as ridiculous as it may seem. The far north and the Arctic concerns more 500 Russian laws and regulations. They are often mutually exclusive, says Artur Chilingarov.

In this confusion, only a few laws remain adequate to modern conditions. All of them were accepted after 2008 of the year. The list also includes the state program “Social and economic development of the Arctic zone of the Russian Federation for the period up to 2020 of the year”, the implementation period of which is extended to 2025. The basic document defining our policy in the World Ocean is the “Maritime Doctrine of the Russian Federation for the period up to the year 2020”. It defines six main regional directions, including the Arctic. In development of the provisions of the doctrine, Presidential Decree No. 327 “On the Approval of the Basics of the State Policy of the Russian Federation in the Field of Naval Activities for the Period to 2030 of the Year” was issued. Most of these documents require examination for compliance with modern conditions. 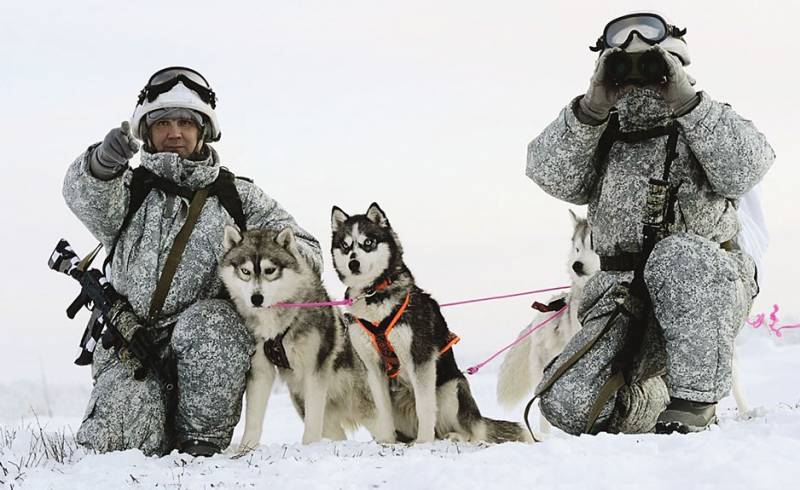 As a result of the confusion in the laws, the completion of the construction of the Arctic icebreaker is delayed indefinitely. The reason is that Kir-Energomash cannot supply a steam turbine plant to an icebreaker manufacturer, Iceberg Central Design Bureau. “A serious problem is the change in legislation regarding the conduct of procurement campaigns,” explained Alexander Ryzhkov, chief designer of the Central Design Bureau, explaining the reason for the failure to deliver the installation.

The concept of a space communications system, which provides enterprises and military units located in the high-latitude zone, has not yet been approved. It is not planned to announce a tender yet, said Oleg Dukhovnitsky, head of the Federal Communications Agency (Rossvyaz). Earlier, his deputy Igor Chursin said that today, with the help of communications satellites in geostationary orbit, the Arctic region and the Northern Sea Route were covered "on the verge of a foul."

According to Evmenov, the Ministry of Natural Resources of Russia last year prepared projects for the integrated management of environmental management in the Arctic seas (including the Russian part of the Barents Sea), as well as the federal law “On the sea (aquatic) planning”. Ecological restrictions are envisaged for activities in various areas, including military ones, as well as a change in the functioning mode of the Northern Sea Route, a shift to its route north of the Novaya Zemlya archipelago. The draft law was prepared on the basis of joint Russian-Norwegian developments. The main goal is to ensure economic activities in the coastal area. "This goal is unattainable without guarantees of the military security of the Russian Federation in the Arctic zone, but for some reason the issues related to this are not included," warns Evmenov.

Ensuring the security of the northern borders of Russia, perhaps even more than economic reasons, determines the current interest in the Arctic topic. Exercises are conducted, including the landing of troops on the North Pole. A military base is being created on the New Siberian Islands. The infrastructure of the Northern Sea Route is being restored.

Fortunately, it was possible to prevent a legislative crime, in comparison with which ratification of the UN Convention on the Law of the Sea 1997 of the year would have seemed a childish prank. In the original version prepared by the government, the Northern Sea Route was defined as an international transport route. Fortunately, there were forces that insisted that the NSR is the historical transport communication of Russia in the Arctic.

According to the chairman of the State Duma Committee on Defense, Vladimir Shamanov, in recent years they have managed to give the status of the operational and strategic command of the Northern Fleet of the Russian Navy. “Thus, a host appeared who is responsible for everything, coordinates everything,” the general said at a meeting of the Expert Council. Shamanov considers it necessary to make more efforts to protect the interests of Russia at the diplomatic level and actively participate in the work of international organizations. Participation in treaties and agreements expands our capabilities when they are in the national interest. For example, the UN Commission recognized the legitimacy of the Russian application for the continental shelf of the Sea of ​​Okhotsk, now it has actually become internal for Russia.

At the same time, the northern borders will not be locked up if reliable rear services are not created. And they are determined by the socio-economic development of the region. According to Valery Babkin, director of the International Institute for the Problems of Chemicalization of the Modern Economy, things are going very badly. For example, on Sakhalin, large companies with foreign capital operate on the basis of a Production Sharing Agreement. “But as a result of their activities, Sakhalin received practically nothing,” the scientist believes. - There are 45 strategies in Russia and none of them is being implemented. Why do people who have never studied this and have a very poor understanding of what needs to be done undertake their development? " There is an opinion that since the beginning of the 90s all the best specialists are involved in commercial structures and, they say, the preparation of high-quality strategies and laws is left to amateurs. General Director of the All-Russian Institute aviation Academician Yevgeny Kablov does not tire of repeating materials from the highest tribunes: “It is necessary to urgently and dramatically change the role and status of the RAS, to return those rights that have always existed. It is the academy that should give the final conclusion on the scientific validity, technological feasibility of any major state project. "

How to restore the infrastructure of the Far North, if people run from there? According to the chairman of the State Duma Committee on Regional Policy, the problems of the North and the Far East, Nikolai Kharitonov, more than a quarter of those currently working in the North are trying to move to other regions of Russia, and people can be understood. The minimum wage in Russia is set at 7800 rubles for all regions, and the subsistence level is completely different in the north and south. No real northern surcharges. Yes, and other guarantees are presented mostly on paper. Almost 200 thousands of families of northerners are in line to receive subsidies in order to go "to the mainland." Many have been waiting for a housing certificate from the state for more than 20 years. Nearly eight thousand people are older than 80 years. According to the governor of the Murmansk region, Marina Kovtun, in recent years there has been a steady trend towards a convergence of regional and average Russian wages. If in 2003, the gap was 1,6 times, then in 2016, in 1,3. “Today, the advantages of living in the North are virtually absent, therefore the outflow of migration is becoming the main factor reducing the population of the Murmansk region. I dare to suggest that this is not only here, but also in other territories of the Arctic zone, ”said Marina Kovtun.

In recent years, an economic and civilizational turn of Russia from West to East has taken place. According to Maria Kovtun, this process is accompanied by a blanket overhang from the Far North, which unfairly reduces attention to very profitable projects in the North, particularly in the Murmansk region. First of all, the governor’s accusations refer to Gazprom, which is keeping a long list of plans for the gasification of the region. “The competitive advantage of the Murmansk region is broad export opportunities. Our region has free, unrestricted access to the World Ocean, and locating natural gas liquefaction facilities with us could provide much more significant export volumes than those planned today for building capacities in the Baltic, ”said Marina Kovtun.

Ctrl Enter
Noticed oshЫbku Highlight text and press. Ctrl + Enter
We are
About Stalin and KhrushchevThe value of Stalin for modern society. Round table
Military Reviewin Yandex News
Military Reviewin Google News
12 comments
Information
Dear reader, to leave comments on the publication, you must to register.