November 17 2017
42
The American publication The National Interest traditionally pays great attention to the Russian armed forces and their development. One of the most interesting materials of this publication, published in recent days, touched on the topic of underwater development fleet Of Russia. Judging by the specific headline, the American press did not come to positive conclusions.


10 November in the headings of The Buzz and Security was published an article "Is Russia's Submarine Force Dying a Slow Death?" - "Are Russian submarine forces slowly dying?". The author of this publication was Robert Beckhasen, who is the editor of the portal War Is Boring. It should be noted that the new article in The National Interest is a revised and updated version of the older material in War Is Boring, which was released in early August. However, as can be judged, the material, in general, remains valid.

R. Beckhasen begins his article with a reference to the events of the recent past. In March of this year in the northern port city of Severodvinsk, the newest nuclear submarine Kazan, designed by 885 Yasen, was launched. Probably, this submarine, which is characterized by reduced noise, can be considered as another proof of the high potential of Russian shipbuilding. It shows that the Kremlin is able to build effective and deadly submarines, including armed with cruise missiles. 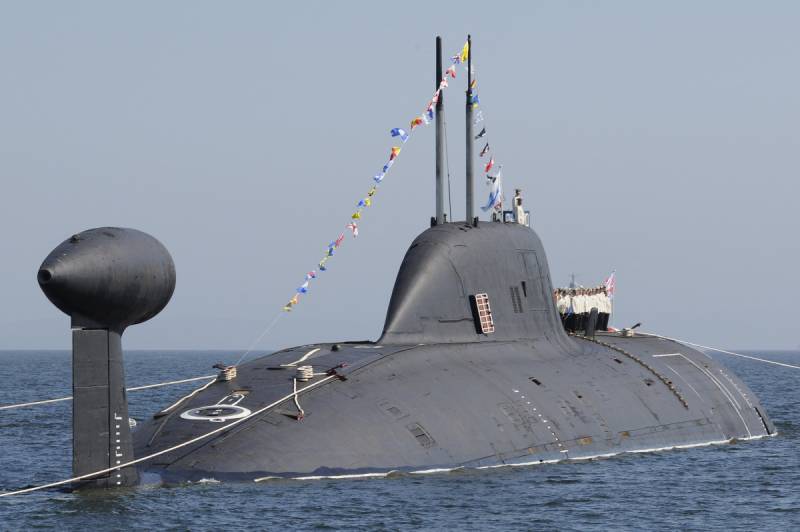 However, the current state of the Russian submarine fleet has its own characteristics. By War Is Boring and The National Interest, it is estimated that by 2030, most Russian nuclear submarines carrying torpedoes and cruise missiles will have time to celebrate their thirtieth anniversary. Moreover, the age of some ships will pass for 40 years. For comparison, R. Beckhasen recalls the oldest of the existing American submarines. For example, the USS Dallas, USS Bremerton and USS Jacksonville boats remain in service for 36 years. In the next three years they will be decommissioned due to moral and physical obsolescence.

During service, submarines wear out and spend their resources. First of all, these features of operation associated with corrosion of the shell. Another serious problem with nuclear submarines is corrosion processes affecting components of nuclear reactors. However, information on this subject is classified by all military fleets and, for obvious reasons, is not published.

Another feature of the old submarines, as reminds R. Beckhasen, is a specific schedule of service. Over time, the ship begins to need a longer and more complex service, which leads to an increase in the intervals between exits for military service. The author recalls that even according to the most optimistic estimates, the Russian submarine fleet can at any moment withdraw only half of its boats to sea. Thus, a group consisting predominantly of relatively old ships should have limited operational readiness.

The Kremlin has already ordered and built two multi-purpose nuclear submarines of the 885 Ash project. Submarine "Severodvinsk" was launched in the 2010 year, the first production "Kazan" - in the 2017-m. However, as R. Beckhasen points out, two new submarines will not be able to become a full-fledged replacement for ships preparing to decommission. In the future, the Russian Navy will have to withdraw 11 submarines of the 971 Shchuka-B / Akula-class submarines, three 945 Barracuda and 945A Condor ships (Sierra-class), and four 671РТМ submarines (C) Pike / Victor III. Over time, the fleet will also abandon the eight submarine missile carriers of the 949A Antey project (Oscar II).

The author also recalls that most of the submarines of the 971 “Pike-B” project entered service in the early nineties. The last of the ships of this type, bearing the name "Cheetah", has been in operation since 2000.

As a replacement for torpedo and missile submarines are considered ships of the project 885 "Ash". This project, according to the author, was created in the last years of the Soviet Union. Now it is planned to build seven submarines on it. The last one will be commissioned in the 2023 year. Such plans look very optimistic, since Ash is notable for its high cost. It is alleged that such a submarine is twice as expensive as a modern strategic missile submarine.

Demonstrating the current situation and its perspectives, R. Beckhase quotes the publication of the well-known Russian blog BMPD, in one of whose materials quite harsh assessments were made. So, Russia intends to continue the exploitation of old submarines for the maximum possible time. At the same time, if we take into account the risks of rising costs, by 2030, the total number of submarine forces of the navy could be halved compared with the current figures.

In the same period, in the year indicated by 2030, the fleet of submarine carriers of strategic ballistic missiles will have a slightly better state. Only a few countries currently have submarines with similar weapons on board - these are Russia, the USA, India, China, France, the United Kingdom and North Korea. At the moment, the Russian Navy is armed with 13 strategic submarines. Three of them were built in recent years according to the newest 955 “Borey” project. Five more similar boats will be built in the foreseeable future.

The situation with strategic submarines in the 2030 year should look like this. The three ships of the project XNUMBБДР (Delta III-class), the six boats of the project 667BDRM (Delta IV) and one project 667 (Typhoon) - if they remain in service - will be at least 941 years. However, even if Russia by this time abandons all these ships and relies on the new Boreas, it will be able to retain its leadership position. From the point of view of the number of submarines with strategic missiles, only the USA, China and, possibly, India can compete with Russia.

It is known that Russia may try to solve the existing problems with the number of submarines with torpedo weapons and cruise missiles with the help of new projects. Thus, a project of unified submarines of the Husky type is currently being developed. On the basis of a common "platform" can be created submarines of different classes that have different tasks.

According to known data, the Husky project can lead to the construction of three types of submarines. The first will be an attacking submarine with torpedoes, the second will become the carrier of cruise missiles, and the main weapons The third project will be ballistic missiles. Cruise ships with cruise missiles are of greatest interest to the Russian fleet. The fact is that the Russian naval doctrine for many years envisaged the use of submarines as hunters for the US carrier strike groups, for which they needed cruise missiles with a sufficient range. R. Beckhasen recalls that Russian anti-ship missiles pose a great danger to ships of a potential enemy.

However, the Husky project may also face problems. Even by the most optimistic estimates, by the 2030, the Russian navy will be able to receive no more than three such ships. At the same time to obtain such results, construction should start at the very beginning of the next decade. In addition, it is necessary to order one boat every two years, and the construction should take no more than four and a half years.

Nuclear submarines such as "Ash" have the ability to launch cruise missiles. However, this does not solve all relevant issues. According to the results of the implementation of all existing plans, in the foreseeable future, the Russian fleet will have only ten new multi-purpose submarines armed with torpedoes or cruise missiles. At the same time, about two dozen submarines, 30 or even 40 years old, who will eventually complete their service, will remain in service.

The author of War Is Boring and The National Interest also touched upon the development of a non-nuclear submarine fleet, although he did not consider this sphere in detail. R. Beckhasen believes that the state of the Russian grouping of diesel-electric submarines is no better than in the case of a nuclear submarine fleet.

The author points out that Russia has 17 diesel-electric submarines of the Kilo family projects (877 “Halibut” and 636 “Varshavyanka” projects). Much of these submarine hunters were transferred into service until the early nineties, inclusive. At the same time, a foreign expert indicates that the newest submarines of the 636 Varshavyanka and 677 Lada projects are being built and put into operation much faster than the larger and more complex atomic Yaseni.

The title of the article in The National Interest was the question of the slow death of the Russian submarine fleet. Nevertheless, the article itself, despite some pessimistic tone, still gives a negative answer to the question posed. Indeed, in the foreseeable future, we will have to observe a tendency towards a gradual reduction in the number of Russian submarines. However, in this case, the underwater forces will not die. Moreover, they will be able to maintain the required potential.

It must be remembered that the processes of downsizing — more pronounced, as well as aggravated by a number of specific factors — were observed in the last decade of the last century. For technical and economic reasons, the Russian Navy was forced to decommission diesel-electric and nuclear submarines of various classes and types. All this led to the most serious reduction in the number of ships and a corresponding drop in the combat potential of the fleet. The construction of new ships, which was also hampered by a lack of funding, did not even allow to partially compensate for the losses.

Unlike the nineties, the Russian military now has the ability to promptly replace aging ships. In recent years, the construction of new submarines of several types. The submarine “hunters” of the old types are replaced by new “Ash”, the submarines of the 667BDR (M) family will eventually give way to the new “Boreas”. The development of a non-nuclear submarine fleet continues, primarily, at the expense of diesel-electric submarines of the Varshavyanka type. In addition, promising submarines are already being developed, which in the distant future will complement the current newest ships.

It should be noted that the conclusions of Robert Beckhasen may not be entirely correct due to some mistakes or a certain slyness. In particular, considering the situation with diesel-electric submarines, he made a mistake. The American specialist indicated that the Russian Navy has 17 boats of the Kilo family. However, the fleet lists 21 listed submarine projects 877 and 636. Even if we take into account the ships that are being repaired, the number of “active” boats still does not coincide with the indicated one.

And yet it must be admitted that in the foreseeable future, the Russian Navy will be faced with the need to write off part of submarines with unacceptably large age. As a simple calculation shows, current construction programs will not be able to provide equivalent in number replacement of this technology. However, in this case, the fleet will not remain without the necessary submarines, and will also retain the required potential. The question asked by an American specialist can be answered with certainty: no, the Russian submarine forces do not die.