Rolling out of the first Tu-160, built after the resumption of their production, took place in Kazan

November 16 2017
75
In Kazan at the Aviation Plant named after SP. Gorbunov held the rollout ceremony of the first prototype of the strategic bomber Tu-160 "White Swan". The head of the Republic of Tatarstan Rustam Minnikhanov took part in the ceremony. 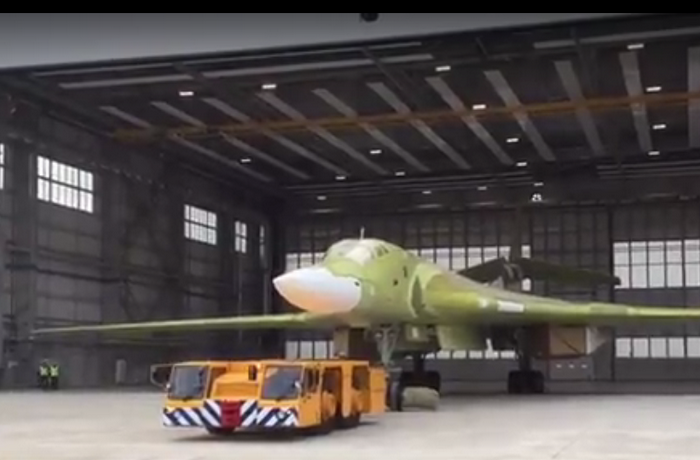 The sample was built on the basis of the technological reserve available at the plant. It was also completed for solving the tasks of reproducing the Tu-160 in a new look: restoring the final assembly technology, checking certain technological solutions, and working out new aircraft engines with improved characteristics. Ship departure scheduled for February 2018
- explained in the press service of the plant.

The updated Tu-160М2 was the first prototype after the resumption of production. The departure of the supersonic strategic bomber is scheduled for February 2018. It was completed after the restoration of the final assembly technology, the testing of individual new technological solutions, the testing of new aircraft engines with improved characteristics.

Tu-160 "White Swan" was developed by the Tupolev Design Bureau in 1970-1980's. Since 1987, he is in service. At the moment, "White Swan" is the largest and most powerful in stories military aviation supersonic aircraft with variable wing geometry. In 2008, its production was discontinued, and in 2015 it was decided to resume production of the Tu-160 in a modernized version, reports TASS

Ctrl Enter
Noticed oshЫbku Highlight text and press. Ctrl + Enter
We are
New developments of KAMAZ showed to the President of TatarstanIs everything calm in Kazan?
Military Reviewin Yandex News
Military Reviewin Google News
75 comments
Information
Dear reader, to leave comments on the publication, you must to register.