November 16, 2017
18
The Turkish company Vestel Defense Industry presented its newest drone. During the Dubai Airshow, which is taking place in Dubai these days, the first public demonstration of the Karayel-SU impact drone took place.

The company Vestel Defense Industry already supplies Karayel drones to the Turkish army. According to the developers, the reconnaissance versions of the drones have already flown 3000 hours and have proven themselves well. The development of the drone version of the Karayel drone was launched at the beginning of this year. 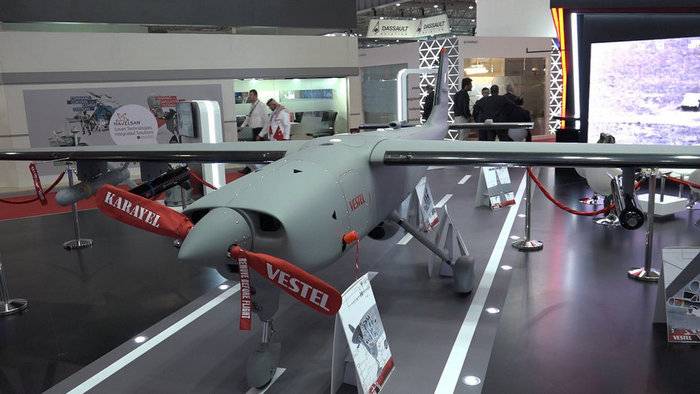 The prototype of the Karayel-SU impact drone.

The new modification was called Karayel-SU and differs from the basic version by an increased wing span, increased payload and the presence of four points for the suspension of weapons. So, if Karayel- "reconnaissance" has a wing with a span of 10,5 m and can carry reconnaissance equipment weighing up to 50 kg, then the shock version has a wing in 13 m and can carry up to 120 kg of payload.

At the Dubai Airshow exhibition, a new drone was presented with models of MAM-L and MAM-C smart bombs produced by Roketsan. According to the developers, the drone can be in the air up to 20 hours and rise to an altitude of up to 5,5 km. Representatives of Vestel Defense Industry declare that a memorandum on the localization of the Karayel-SU production in the territory of this country has already been signed with the Defense Ministry of the United Arab Emirates, reports "Warspot"