American experts have canceled the Russian offensive on the Baltic

November 17 2017
19
Random NATO provocation of war with Russia? Is it possible? Does the alliance tread on itself a deadly path? Some experts believe that he can stamp on it. If NATO does not stop building up forces in the Baltic region, Russia can change its peace-loving position. On non-loving. 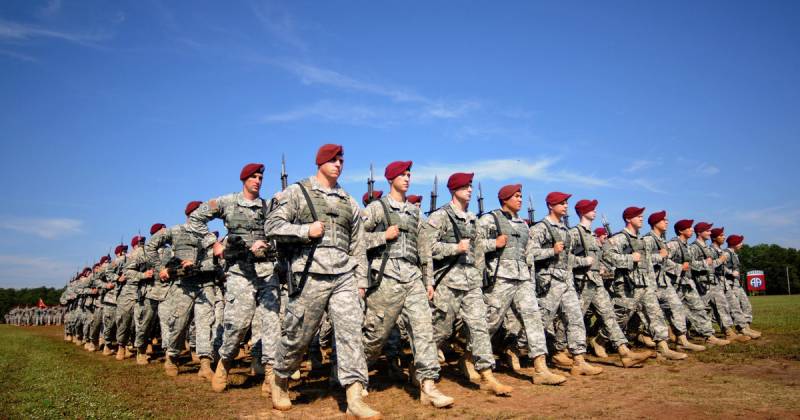 How can NATO "accidentally" start a war with Russia? This question was answered by a specialist of “brain trust” RAND, political scientist Andrew Radin. His material was published in a magazine. "The National Interest".

From the expansion of NATO’s presence in the Baltic states, Moscow would have felt the “need to invade” the region, even if the NATO forces deployed there could not “challenge” the Russian military vehicle.

After "Russia's seizure of the Crimea and the support of the separatists in the Ukrainian Donbass," writes E. Radin, military officials and military analysts in the West "expressed concern" about the likely "Russian aggression in the Baltic countries."

The RAND 2016 report of the year showed that in the event of a sudden rapid invasion, Russian forces would reach the outskirts of the capitals of Estonia and Latvia "in sixty hours." It would take “three to six months” to deploy the US forces sufficient to “return” the Baltic states, taking into account the risk of a nuclear response. In this scenario, it is obvious that the United States would still have some "good options" to answer.

Given Russia's military capabilities in the Baltic region, the experts expressed serious concern over the military exercises that the Russians had planned for September 2017. According to analysts, these teachings could become a "forerunner of the attack" on the Baltic countries. However, the exercises are over, and the Russian troops returned to their bases “without incident”.

The fact that Russia did not use the “West 2017” maneuvers as a start “for aggressive actions” raises the question: does Moscow really have promising “aggressive intentions” against the Baltic countries?

According to Radin, at present, Russia's foreign policy interests “do not give any grounds for an attack by the Baltic countries.” In the context of foreign policy, Russia's priorities “in other regions” should be of great concern to the West.

And the key to understanding the situation in the Baltics is Russia's attention to NATO, its perception of NATO as an organization that can form over time "sufficient forces to create a threat." The United States and NATO could pay less attention to the Baltic countries, and instead try to understand what the real interests of Russia are and where these interests threaten Western democracy and security, the analyst believes.

Observers who warned of a possible Russian attack on the Baltic states later acknowledged that such an invasion was “unlikely.” Nevertheless, they still claim that NATO should increase its forces in the region, since Russia's intentions are “uncertain”. Russia's actions in Ukraine can become "a sign of more aggressive or revisionist intentions."

The Baltic states were part of the Soviet Union. You should also remember about the significant "minorities" of Russian-speaking residents in Estonia and Latvia. Even if Russia did not seek to occupy these Baltic states, it could take military action against them "in order to undermine the NATO alliance." Following this reasoning, if Russia seized part of the Baltic states or the Baltic states entirely, and NATO would not respond to Moscow in accordance with its statutory article 5 (considering an attack on one member as an attack on all members of the alliance), Russia could formally "Destroy the alliance." Analysts believe that the consequences would be so serious that they would justify a significant build-up of US forces in the region.

However, this reasoning avoids a detailed description of Russia's interests and the corresponding foreign policy discourse. Russia sees itself as a “great power” and watches its neighbors. In the opinion of Russian analysts, the author recalls, the near abroad of Russia includes all the republics of the former Soviet Union, except for the Baltic countries. The Baltic countries are alien to Russia, fully integrated with NATO. With the exception of a few tough Russian “Eurasians” like Alexander Dugin, “having little influence on politics,” Radin ironically, few people are interested in the occupation of the Baltic states. Yes, Russia is indeed showing interest in continuing relations with Russian-speaking residents of the Baltic states, including through its “policy of compatriots,” but this priority is low. If we take into account the current absence of threats to the security of Russia from the Baltic countries, it is difficult to understand why the Russians will suddenly go to these countries. A recent RAND report showed that Russia does not have a “serious discussion” of the strategic value of “part or all of the Baltic states, be it their intrinsic value or the way to weaken NATO.”

The Russian discourse, including the theme of Ukraine, emphasizes only the limited significance of the Baltic for Russian foreign policy. Russians seem to see Ukraine as a continuation of Russia: according to some information, it is “Small Russia”, or, as Putin explained to President Bush in 2008, even a not completely independent country, given the close ties between Russia and the regions of Ukraine. Russian media and society see "coordinated and deliberate attempts by the West to undermine Russia's position in Ukraine." On the contrary, in Russia "they cannot imagine that Western concerns about Russian military actions in the Baltic States are legitimate and tend to be perceived as manipulations by the Baltic countries or the military-industrial complex of the United States." The public description of the value of the Baltic countries is “incompatible” with the fact that Russia allegedly plans an “offensive military operation” against them.

It’s another thing that Russia regards as a threat to its security and the influence of NATO forces in its region. But this concern is connected with the advance of NATO to the east, and not with the defense guarantees of the alliance to its members. When Russian defense officials emphasize the threat of NATO, they discuss military infrastructure close to Russia, Western support for the “color revolutions” and support for the possible NATO integration of the former Soviet republics (Georgia and Ukraine).

Considering Russia's lack of interest in the Baltic countries, the expert continues, the United States and NATO should pay more attention (and, accordingly, resources) to where Russia has interests, opportunities and intentions to undermine Western democracy and security. The Kremlin is not a kind uncle. Earlier it was reported "about the hacking of elections in the USA, about supporting the right-wing parties in France, about manipulating energy resources for political influence in Bulgaria", as well as about other "subversive actions" that represent a "serious threat to democracy and security of the United States, The EU and NATO, the analyst recalls. After "the annexation of Crimea by Russia, its armed forces in the Black Sea have increased significantly, which potentially poses a threat to the NATO member states of Romania and Bulgaria." Finally, Russia's actions in Ukraine “threaten the norms of sovereignty and undermine NATO and the EU’s commitment to integrating European countries.”

Hence it is clear that the US and NATO should not assume that the “most likely point of Russian aggression” is the Baltic. At the same time, Russia's “lack of interest” in the attack on the Baltic states does not mean that NATO should withdraw its troops from this region. Rather, deterrence here "must be proportionate to Russia's interests." Currently, NATO has deployed four battalions of reinforced presence in Poland and the Baltic countries. These forces are “sufficient” to prevent Russia's “aggressive actions”.

However, a further build-up of NATO forces in the Baltic region can change Russia's view of the situation, especially if Moscow considers that NATO forces in the region pose a “threat to the Kremlin’s ruling regime”. After examining the Western military actions in Iraq, Libya and the Balkans, Russian analysts "expressed concern" that the close military presence of Western forces could become a "forerunner of a decapitating strike" or could "contribute to a color revolution in Russia."

Meanwhile, we note, Western hysteria about the "Russian attack" on the three Baltic republics continues.

The other day, member of the Federation Council Franz Klintsevich spoke on this issue.

“There are no full-fledged armed forces that could represent some kind of military force. In order to overcome the border with Russia, NATO must conduct preliminary work. And now she is in the Baltics, the equipment is being delivered ”, - He explained Senator of the program "60 minutes" on the channel "Russia 1".

Well, peace, friendship, chewing gum. It is not clear why "the equipment is imported."

Observed and commented on Oleg Chuvakin
- especially for topwar.ru
Ctrl Enter
Noticed oshЫbku Highlight text and press. Ctrl + Enter
We are
Russia and NATO: RAND report and its implicationsSix versions of the reasons for the assassination attempt on A. Brain
Military Reviewin Yandex News
Military Reviewin Google News
19 comments
Information
Dear reader, to leave comments on the publication, you must to register.