Communism for the Japanese. How South Sakhalin was integrated into Soviet society

November 16 2017
24
The defeat of Japan in the Second World War was marked for the Soviet Union by significant territorial acquisitions in the Far East. Among these acquisitions was the southern part of Sakhalin Island, which Japan annexed in 1905 in the year following the Russian-Japanese war. From 1907 to 1945 for almost forty years, South Sakhalin was called Karafuto Prefecture. All this time there was an active settlement of South Sakhalin by the Japanese. If in 1905, the Japanese population of the island numbered 2 thousands of people, then already in 1920, more than 100 thousand Japanese lived in Carafuto, and by 1945, South Sakhalin was inhabited by 355 thousand Japanese. The small Russian population led a marginal existence, engaging in subsistence farming. Since schools were taught exclusively in Japanese, the younger generations of South Sakhalin Russians were completely illiterate. It fit well into the plans of the Japanese leadership for the "survival" of Russians from South Sakhalin. 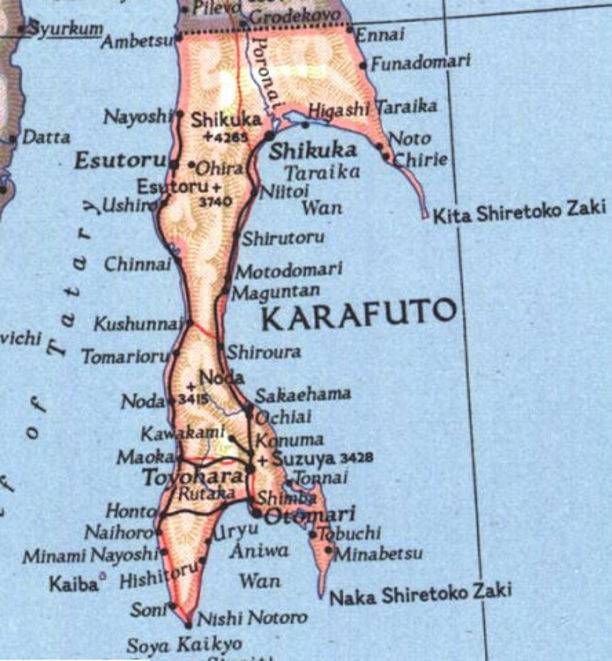 In 1943, the Karafuto prefecture received the status of "inner Japanese territory", since the Japanese constituted the overwhelming majority of its population. By the time of liberation of South Sakhalin, the Russians were inhabited by a little more than 100 people. These were the “old-timers” of South Sakhalin and those who fled here during the Civil War from the Bolsheviks. After the start of World War II, the Russian population of Karafuto was herded into special reservations, his position deteriorated further. This contributed to the ideological transformation of the majority of Russian old-timers of South Sakhalin. If before they were opposed to the Bolsheviks, in 1945, they were looking forward to the arrival of the Soviet army.

When South Sakhalin became part of the Soviet Union, inevitably the question arose of how to integrate the former Japanese prefecture into Soviet society. There were several difficulties. First, almost all of the island’s civilian population were ethnic Japanese. That is, as part of the USSR, there was an area populated by people who have their own statehood and are far from friendly to Moscow. Secondly, on South Sakhalin at first glance there was no personnel reserve for the formation of Soviet government bodies. Not the Japanese to hire them. For forty years of the existence of the Karafuto prefecture, the Japanese authorities managed to almost completely destroy the “Russian world” on southern Sakhalin, the influence of the Russians here was almost not felt - unlike the Baltic states. 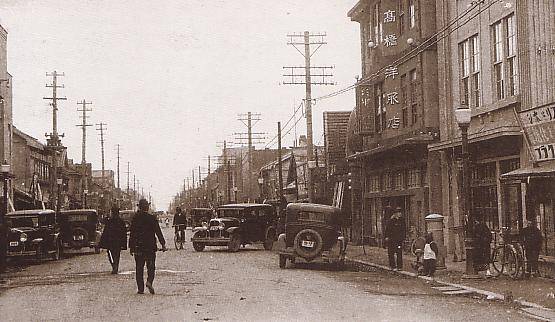 The only ones who could rely on the Soviet government in the integration of South Sakhalin, were just Russian old-timers, including former White emigres. At the same time, the civilian Japanese population was greatly intimidated by Japanese propaganda and by the time Soviet troops entered Karafuto, most of the Japanese simply fled to the mountains covered in forests to hide from Soviet soldiers. When it became clear that the Soviet troops were not going to unleash mass terror against the Japanese population, the civilians began to gradually return to cities and towns. Only about 100 people from the 300-thousandth Japanese population tried to organize partisan resistance and even carried out several sabotage actions before the Soviet counterintelligence dealt with them. By the way, the peaceful Japanese population, having understood that the Red Army did not cause them any harm, quickly assumed the Soviet power and helped counterintelligence officers to overfire all the saboteurs who were trying to wage a partisan war.

However, it was obvious that such a number of officials in a populated area is clearly not enough. And here the Soviet leadership showed great political wisdom and flexibility. The Soviet authorities did not touch the Japanese officials who led the civil institutions and enterprises of South Sakhalin, but allowed them to remain in their posts, managing as Soviet administrators. For Japanese officials who were awaiting internment in prison camps, such a decision was a real shock. Even Otsu Tosio, the last Japanese governor of Karafuto, who began to work under Dmitry Kryukov, retained the leading position.

The preservation of authority for Japanese officials was a very correct decision, since the whole life on Southern Sakhalin was radically different from the Soviet one, so the Soviet administrators brought up in the USSR simply could not do without the help of local managers. Adaptation of the former Japanese prefecture to the living conditions within the Soviet state was difficult. It was only the natural discipline of the Japanese who diligently carried out all the orders and orders of the new government. It is noteworthy that for the Japanese population of South Sakhalin the establishment of the Soviet power was rather a relief - for example, the Japanese peasants previously could not freely trade in the products of their labor, but were forced to turn them over to state monopolies. The Soviet government opened free markets on South Sakhalin, the consequences of which were immediately felt by ordinary Japanese - peasants, fishermen, artisans.

The Soviet power by the standards of the Japanese differed unprecedented democracy. Medieval ceremonies that inevitably accompanied the life of Japanese officials are gone. Even the most senior Soviet officials behaved very modestly. Ritual obeisances were abolished. A separate topic was the closure of public houses, which operated on Japanese Sakhalin is absolutely legal. All geishas who worked in brothels were necessarily employed in enterprises.

By the way, until the return of South Sakhalin, the working day of the Japanese proletarians lasted 11-14 hours. Naturally, there was no question of any social guarantees for the workers. Most of them worked practically in hard labor conditions. Women received two times less than men, even if they did the exact same job. Any Korean worker received 10% less than a Japanese worker, regardless of his qualifications and workmanship. The Soviet government has completely eliminated any discrimination on the basis of sex and nationality in the field of employment.

Corporal punishments that had been actively used by the Japanese authorities in relation to workers were abolished. Thus, ordinary Japanese workers rather won as a result of the accession of South Sakhalin to the Soviet Union. The positive effects of this accession began to be felt already in the first year after the defeat of Japan. For example, Japanese workers received an 8-hour day, a weekly rest day, and hospital benefits. All the debts of the Japanese and Koreans who lived on South Sakhalin to the local branches of Japanese banks were saying goodbye. So thousands of Japanese got rid of the credit burden. 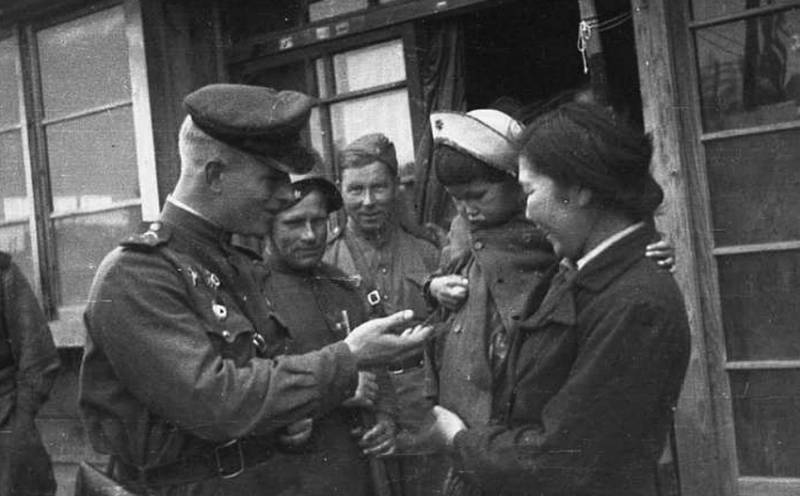 Japanese collective farms were established on South Sakhalin, pioneer camps were opened for Japanese children. In January, 1947 was opened drama theater, which played the Japanese actors. The welfare of the Japanese population has increased dramatically. Today it seems fantastic, but then, in 1946-1947, many Japanese from Japan proper tried to move to South Sakhalin, as they had heard about a better life in the Soviet Union. The border guards regularly detained dozens of such "defectors". Considering that American troops were stationed in Japan itself, the Japanese had something to compare with the behavior of Soviet military personnel. Sakhalin relatives even tried to invite their loved ones from Japan to the island, telling in letters that life in the Soviet Union is very advantageous from life in Japan itself. Interestingly, even the ministers of the Buddhist and Shinto temples were able to perform all their rituals unhindered, and the Soviet government set them a decent official salary.

Democracy and humanity of the Soviet government contributed to the rapid popularization of communist ideas in Japanese society. If you turn to stories Japan of the first half of the twentieth century, it is known that until the 1930-ies. in Japan there was a very strong communist and generally left radical movement. However, as the militarist regime tightened, most of the Japanese communists, socialists and anarchists were destroyed, and the few “lucky ones” managed to flee to other countries. The defeat of Japan in World War II led to the fact that socialist and communist ideas began to spread again in the country. At the same time, life on Southern Sakhalin was considered by the Japanese Communists as an example of the success of communist ideas. On Southern Sakhalin itself, many Japanese also imbued with communist ideas, and this applied to the workers, the peasants, and the representatives of the Japanese intelligentsia.

However, with all the loyalty to the Japanese, the Soviet government was well aware of the need to move non-Japanese population to South Sakhalin. Therefore, already in 1946, Soviet citizens from the RSFSR and other republics of the Soviet Union began to move to South Sakhalin. Employees of various specialties were sent to the former Japanese prefecture. They were given full assistance in accommodation. Since there was practically no free housing, the settlers were hooked up with Japanese families.

To the surprise of the latter, the Soviet people, including the military, were not at all scary (and the Japanese propaganda literally demonized the Soviet Union, the Red Army, the communists and the Komsomol members). Numerous testimonies of the Japanese that the Russian soldiers and officers treated them well, were friendly and democratically preserved. And this is despite the fact that the Japanese population of South Sakhalin did not have the status of Soviet citizens. There are numerous cases of romance between Russian men, usually officers, soldiers and sailors, and Japanese women. Since the latter did not have Soviet citizenship, it was impossible to marry them at that time, and for “amorous affairs” with foreign nationals it was possible to get very big problems in the service.

Two years after the war, the Soviet leadership bore the idea of ​​creating Japanese autonomy, which was supposed to set an example to the workers of Japan itself. However, then from this idea I.V. Stalin still refused. By 1947, relations with the United States rapidly deteriorated. Japan was completely under American influence and the Soviet leadership found it inappropriate to have a huge Japanese enclave on Sakhalin. Paradoxically, Washington was also in favor of moving the Japanese from Sakhalin to Japan. The American leadership was convinced that the socialist Japanese autonomy on Sakhalin could have a very negative effect on Japan itself, since it would contribute to the spread of communist ideas in Japanese society. "Redness" of Japan, after China, the Americans were not going to allow.

2 January 1947, the South Sakhalin Oblast was merged with the Sakhalin Oblast. An even more active settlement of Southern Sakhalin by Russians arriving from the mainland began. At the same time, the Japanese population was ordered to prepare for deportation "to their historic homeland." Soviet and American authorities were engaged in transporting Japanese citizens from Sakhalin to Hokkaido together, the American side providing ships for transportation, and the Soviet side resolving organizational issues on South Sakhalin itself. Already by August 1947, Sakhalin left 124 308 people.

Interestingly, most of the Japanese themselves did not want to go home. They liked it better in the Soviet Union, with a system of social guarantees, real equality, job security. Many Japanese asked to stay on Sakhalin, but the Soviet leadership was inexorable - the Japanese decided not to leave the island altogether.