Battle of Stalingrad changed the course of the “Big Game” 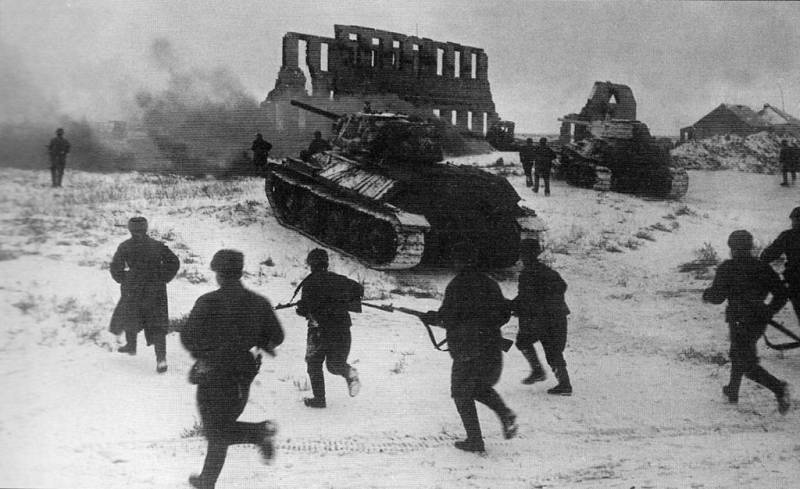 75 years ago, the Red Army launched a counteroffensive at Stalingrad, which ended with the encirclement and destruction of the German Stalingrad group. This battle was the most significant event not only of the Great Patriotic War, but of the whole world war. There was a radical, strategic turning point in the war.


The Red Army began a counterattack on the entire Soviet-German front, inflicting on the enemy one defeat after another, freeing the Russian (Soviet) lands and then all of Europe from the "black-brown plague" (Nazism and Fascism). The battle of Stalingrad was of great importance for the entire Soviet country, the Soviet people. The Soviet Union, the people and the army gained a second wind, withstood the terrible 1942 year, crushed the enemy's hordes at Stalingrad and in the Caucasus. The Germans called Stalingrad "Red Verdun" - the best, the shock forces of the Wehrmacht got bogged down in the Volga city, lost their mobility and maneuverability. Began a viscous, bloody "porridge", exhausting positional struggle, where success was measured in meters! The city was turned into ruins. But the German troops could not throw Chuykivtsi (Chuikov’s army) into the Volga. The German army was exhausted, drained of blood and morally broken. Wehrmacht across the Soviet-German front went on the defensive.

Conducted intense fighting on the 1300-kilometer front (Voronezh and Stalingrad directions) Army Group B was unable to break the resistance of the Bryansk, Voronezh, South-Western, Don and Stalingrad fronts. The main strike group of the Wehrmacht - 6th field and 4th tank Army - stuck in fierce battles on the Lower Volga. The German command was forced to transfer to Stalingrad to make up for the huge losses of 32 divisions from the army group "A", operating in the Caucasus. As a result, the Caucasian group of the Wehrmacht also lost most of its striking power and could not solve the tasks assigned to it. The 1st Panzer and 17th Field Armies invaded deep into the Caucasus, but could not capture the "black gold" of Grozny and Baku. In the Caucasus, as well as near Stalingrad, the position of the Wehrmacht became dangerous, operational and strategic reserves were expended. The successes of the Wehrmacht spring - summer 1942 were depreciated. The goal of the 1942 campaign - the complete defeat of the Soviet armed forces and the military-political collapse of the USSR, turned out to be unattainable.

Thus, as in the 1941 campaign of the year, the German military-political elite grossly miscalculated in their calculations. The idea of ​​capturing the main economic regions of the Soviet Union, which, according to Berlin’s plans, would lead to a complete collapse of the Red Army and the USSR, was based on an incorrect assessment of the moral and political factor (stability and moral-volitional qualities of the Soviet leadership, the army and the people in general), military and economic potential of the Soviet Union. The spiritual, military-political and economic stability of the USSR turned out to be much higher than they thought in Hitler's Germany (and in the West as a whole). The “colossus on clay feet” turned out to be in fact a steel titanium, able to withstand and win in the most severe slaughter in stories of humanity. The Soviet civilization project and the socialist system showed the highest efficiency and superiority over the “Eternal Reich” - the advanced predatory project of the Western world.

The Red Army, the supreme Soviet command clearly revealed this moment. There was an opportunity to intercept the strategic initiative in the war, to inflict a powerful counter-attack on the enemy and to start the expulsion of the invaders from their native land. In addition, the battle in Stalingrad made it possible to put in order the defenses and troops in other strategic areas, prepare strategic reserves, and finally transfer the economy to "war rails". In the second half of 1942, a radical change was also achieved in the work of the military-industrial complex. The Soviet national economy has won its victory. Aircraft production in December 1942 year compared with December 1941 year increased 3,3 times. In the second half of 1942, the Soviet air force received an average of 2260 airplanes monthly, and for the entire year the country produced 25 436 airplanes. And what is very important, the new Soviet aircraft (IL-2, Yak-7, La-5, Pe-2) were not inferior in their fighting qualities to German aircraft. The production of tanks grew rapidly. In 1942, 24 668 tanks were launched, including medium T-34 tanks over 50%. In the same year, 3237 rocket launchers (“Katyush”) were commissioned by the Soviet troops, about 30 thousand guns of caliber 76 mm and above, production of 300 mm mortars increased by 120%. The Red Army received all the necessary weapons in order to achieve a breakthrough in the war.

It is also important to note that The battle of Stalingrad forced the owners of the United States and Britain to act on a more favorable scenario for the Soviet Union. In the spring - summer of 1942, our Western "partners" did not even think about actively acting on the main European theater of war. At the beginning of the war, the military and the politicians of the United States and England were generally convinced that Hitler’s Germany, which had subdued the military-economic potential more than a part of Europe, and its allies (many forget that Italy, Finland, Hungary, Romania, Spain, Slovakia, and volunteers fought against us from all over Europe) will deal with the Soviet Union in a few weeks or months. At the beginning of German aggression against the USSR Vice President Truman declared: “If the Germans win, it’s worth helping the Russians, if the Russians take the upper hand, you need to help the Germans - and let them kill each other as much as possible!” The United States at that time was supposedly a neutral country. Churchill in the 1942 year at a meeting of the military office formulated the task as follows: "To detain Russian barbarians as far as possible in the east, so that they do not threaten a free Europe."

The masters of Washington and London, who in fact unleashed another world war, successfully offended the Germans and Russians for them, were very pleased with this massacre. Two great powers, the union of which could challenge the Anglo-Saxons, destroyed each other. And most importantly, the Soviet project challenged the Western project of creating a “new world order” - a global slave civilization. He offered mankind an alternative — a bright world without slavery, parasitizing a few “chosen ones” over “two-legged tools”, “subhumans”, a society of service and creation, social justice. It was a terrible challenge for the masters of the West. Their millennial project to create a “global concentration camp” collapsed. To stop the Soviet Union, the masters of the West created the “Hitler” project. They gave the Führer to subjugate Germany, to restore its military-economic potential. With the help of prohibited psychotechnologies to make the Germans a single combat mechanism. In fact, in Western Europe, the gates opened in inferno, created the civilization of the “black sun”. Germany gave most of Europe (even France!) And threw Hitler's “blond beasts” onto Russia-USSR in order to crush the Russian (Soviet) globalization project and once and for all put an end to Russia and the Russians.

Germany had to do away with the USSR in one powerful blow. Hitler had a secret agreement with London (the flight of Rudolf Hess), so he was not afraid that a real second front would be opened. Berlin could concentrate all forces on the Russian (Eastern) front. Then the owners of the USA, England and Germany could agree on the division of the planet into spheres of influence. For the fact that Hitler did not fly off the leash, the owners of the United States had an absolute argument - an atomic project. On the other hand, the owners of the United States and England knew that the battle in the East would exhaust Germany, and to destroy Russian resistance and control the vast expanses of Russia, Russia would need a huge occupation army and resources. Therefore, Berlin will be able to dictate their terms. The scenario of the “palace coup” was also ready, if Hitler showed excessive autonomy. Hitler had to eliminate the generals and senior officers who wanted to "negotiate with the West."

The defeat of the Wehrmacht at Stalingrad and the defeat in the battle for the Caucasus forced the masters of the West to measure their strategy and plans. It became obvious that the USSR, albeit at the cost of colossal losses, would take up. That is, it will be necessary to create a “second front” in order not to give up most of Europe to the sphere of influence of Moscow, which is subordinate to Hitler. It will be necessary to abandon the secret agreement with Berlin, and to pretend that the “world community” (the United States and Britain with the satellites) opposed Nazism and fascism from the very beginning. Although in reality, it was the masters of London and Washington who nurtured fascism, Nazism themselves, and unleashed a great war in Europe and in the world.

In this way, The battle of Stalingrad changed the course of the Great Game. There was a radical change in the war. Germany lost its strategic initiative in the Great Patriotic War, it passed to the USSR (finally after the Battle of Kursk). The United States and Britain switched from a strategy that expected the USSR to be defeated in the war, to another scenario — active economic assistance to Moscow, the struggle to maintain positions in the post-war world and Europe under the conditions of the Soviet Union (they still hoped in the West that they were extremely weak, doomed to soon fall). Japan, like during the battle for Moscow, once again convinced of the power of the Soviet Union and abandoned plans to invade the Russian Far East. Turkey also maintained neutrality, although earlier it was leaning towards the axis Berlin-Rome-Tokyo.

The Third Reich again goes on the offensive.
"The whole Russian front was falling apart ..." Wehrmacht breakthrough in the southern strategic direction
Stalingrad Fortress
1942 year. "The operation in the south develops without stopping"
How the German army broke through to Stalingrad
Expectations to take Stalingrad a sudden blow failed
Breakthrough of the 6 of the German army to the northern outskirts of Stalingrad
Defeat of the Crimean Front
"The spirit of optimism ... vital at the command post of the front." Kharkov disaster of the Red Army
Khrushchev dumped all the blame for the Kharkov catastrophe on Stalin
How the Wehrmacht stormed the Caucasus
Battle for the Caucasus: no invasions from land
The battle for the "black gold" of the Caucasus
How failed operation "Edelweiss"
"Soviet troops fought for every inch of land ..."
"Verdun of World War II ..."
"It truly was hell." How to reflect the first blow to Stalingrad
"We will storm Stalingrad and take it ...". Second storming of the stronghold on the Volga
The second assault on Stalingrad. H. 2
The third assault on Stalingrad
"Tanks drive through people like wood." The third assault on Stalingrad. H. 2
“We are fighting as if we are possessed, but we cannot make our way to the river ...”

Ctrl Enter
Noticed oshЫbku Highlight text and press. Ctrl + Enter
We are
Day of the defeat by the Soviet troops of the German fascist troops in the Battle of StalingradReports from the militia of New Russia for October 7 2014 year
34 comments
Information
Dear reader, to leave comments on the publication, you must to register.