Klim Voroshilov, who withstood the explosion of a ton bomb 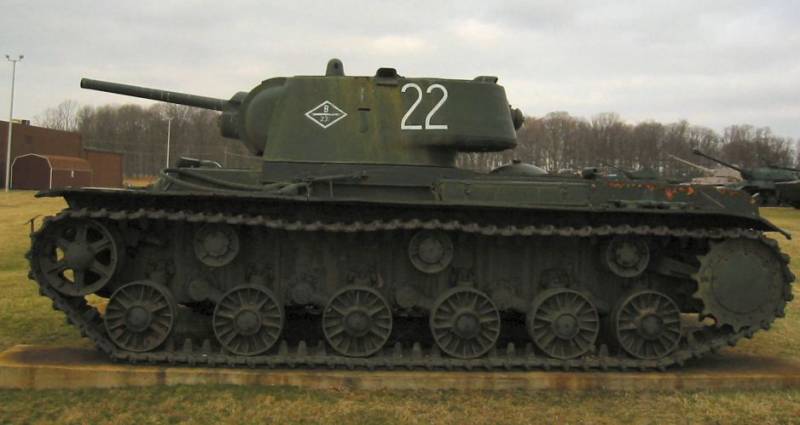 The KV-1 tank earned conflicting ratings. They rightly criticized him for his lack of reliability - the transmission, which could not withstand heavy loads tank. But at the same time, the tank was slightly vulnerable to enemy fire, very tenacious.

The shell is stuck in the tower like a knife thrown into a tree.

Perhaps one of the most striking examples of this kind is in his memoirs, Major General Tank Forces Ivan Vovchenko. In 1942, he commanded the 3 Guards Tank Brigade. It was originally equipped with the HF-2, then the HF-1:

“The situation was such that I often had to leave the command post and sit in KV No. 11385, commanded by Senior Lieutenant Vakhnov, and the driver was the tireless Rogov.

In the midst of battle, our HF took the lead. The artilleryman Abramkin set fire to the enemy machine with two shots. A few minutes later the second German tank broke out. But the enemy shell hit the front of our tank and slipped on the armor. In the periscope, I saw how in the air, like meteorites, hot incandescents flew by. The second shell hit in the right side. This shell is stuck in the tower, like a knife thrown into a tree. From a blow of hail shattered fragments of armor and killed the commander of the car, Senior Lieutenant Vakhnov. Now I commanded a tank. Abramkin hit two more cars, but our tanks were also damaged by enemy guns. Rogov was wounded in the arm. KV stopped. We continued to fight from the spot. All night, the repair team stole near tank number 11385. By morning the tank was ready for battle. Just yesterday, two blanks stuck in his tower. Hundreds of times a tank was scraped by fragments and bullets, there were a dozen dents in it from the fragments of bombs. The armor became rough, like oak bark, so cracked from the blows. However, the car survived. But the crew ... The tank commander, Senior Lieutenant Vakhnov, was killed, the driver Rogov was wounded, but not seriously. On the same morning, tank commander No. 11385 became lieutenant Kuznetsov, and the driver — foreman Sviridenko, replacing the wounded Rogov ”.

The survivability of the tank number 11385 did not cause surprise, the ability of the KV-1 to withstand hitting many German projectiles by 1942 was well known.

There was no tank

But then the tank and its crew experienced a new test:

“Bombers appear again. This time, Yu-88 ... Not far from the observation point, under a lonely tree, stood a heavy tank control brigade commanded by Kuznetsov. There were four more cars near it. Suddenly a huge bomb with a whistle flies right on the tank, and the car disappears into the smoke. When the wind carried smoke and dust aside, we saw only a dry tree. Tank as it was not. I sent a machine gunner to find out what happened there. Meanwhile, the planes, dropping the entire supply of bombs, disappeared. The smoke gradually dissipates. I could not believe my eyes. Under a dry tree from the pit rises gun with a tower. The gun beats in the direction of the enemy. Kuznetsov's tank is alive!

Fight subsided. We go to Kuznetsov. Behind the HF funnel from a heavy bomb. The width of the crater is about ten meters, and the depth is almost five meters. The tank survived because the bomb from the plane does not fly vertically, but at a large angle. She crashed into the ground under a tank and, having exploded, threw out a few dozen cubic meters of earth.

The force of the explosion tank threw and then dropped into the funnel.

- After the explosion, we all lost consciousness. Gone blood from the nose and ears. When I came to, I heard the moan of the tower. His head lay on my lap. I took out the baclag with alcohol and gave him a little drink. Then the two of us helped other crew members. Rogov started the engine. And only then I noticed that we can not see anything. Like in the cellar. A few minutes later, we realized that the tank had sat down in a deep funnel. Gradually, swinging the car back and forth, we finally pulled it out of the funnel. You can continue the fight ...

- Weathered a thousand kilogram bomb! - I was surprised.
Inspected the tank. The bottom is 40 millimeters thick and was concave in the middle. But the frame, on which the engine is strengthened, stood, did not move. ”

How many tankers of the Second World War, survived such a flight, and after its completion, surviving, could tell the commander about their feelings while doing so? And how many tanks after such an explosion and flight would start the engine?