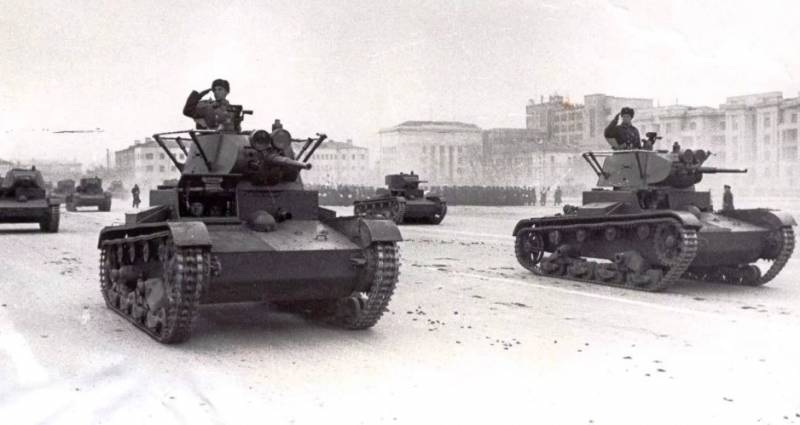 The few tankers who happened to start a war on tank T-26, survived to the opportunity to talk about what they experienced in memoirs and interviews. The largest tank of the Red Army by the beginning of the Great Patriotic War with armor, which protected tankers only from bullets, with insufficient mobility, did not contribute to the survival of the crew.

Our "boxes" seemed to us "formidable fighting machines"

Joseph Yampolsky is one of those who joined X-NUMX on T-1941, commanding a platoon of these machines. He was not a regular soldier (I remember the site): “In 26, I came to Kiev and started working at the Mechanical Plant. A couple of years he entered the Kiev Industrial (Polytechnic) Institute. He graduated in March 1932, received a degree in mechanical engineering of chemical engineering and returned to his native plant as a chief mechanic ... I studied in the militarized faculty. After the commander’s training, which lasted several months, we all were given the commanding ranks, and we were certified to the position of “commander of a tank platoon” ... When they passed Molotov on the radio, I collected a backpack, said goodbye to my wife and came to the recruiting office. According to the mobilization prescription, in the event of a call, I had to arrive during 1939 hours in the city of Lviv, in the Stryi park, where my tank unit was stationed. In the military registration and enlistment office of us, twenty “Lviv” people were detained for two days. It turned out that our unit was bombed out and there is an instruction not to send to Lviv, until further notice. We, a group of commanding officers, were sent to Lubny, and from there to Kharkov, to the 24-th reserve tank regiment. Here was the formation of individual tank battalions for the front ".

Neither T-34 nor KV were in the formed tank battalion:

“T-26 tanks ... Crew three people. Then, before the first real battle, our "boxes" seemed to us "menacing fighting machines" ... Almost all the cars were with walkie-talkies. There were some more BT-5 and BT-7. With rare exceptions, all the tankers were called up from the reserve, so our training was, to put it mildly, not very bearable ... But then who had the time to thoroughly prepare the reserves ”!

We beat on all sides

Joseph Yampolsky and his tank platoon had to enter the first battle not far from the location of the 615 reserve tank regiment near Kharkiv:

“After three months we were thrown into battle. There is such a village - Kilukivka, it seems. The Germans placed artillery batteries in the area of ​​this village and shelled the highway leading to Kharkov. Notice and suppress our batteries could not. I was summoned by the battalion commander and put a task to my platoon - to break through to the outskirts of this village occupied by the Germans, call the fire on myself, detect and map the location of enemy firing points, and transmit the data on the radio to the command post. This task, in fact, was a death sentence for us, but the order was received. At that time I was already a communist, I was brought up as a patriotic fanatic, therefore I was preparing for a heroic death for my Motherland. There was no fear. On the contrary, some kind of naive sense of pride that today I will die for my beloved country, but I will accomplish a feat ... It’s ridiculous to recall now. But this was my first fight. In the afternoon, my platoon as part of the five T-26 vehicles entered the village, and we were divided. With three tanks, I walked along the main street, and my commander-in-chief, Tereshchenko, moved with two tanks in parallel. And then it began. We beat on all sides. One car was burned, another was hit, but the crew died. I still managed to reach the tank Tereshchenko and take away the tablet with the map, which coordinates the German guns were killed from the hands covered with blood ... God kept us, three tanks left the village and returned to their back. Tereshchenko (posthumously) and I was awarded the Order of the Red Star, and the rest of the tank crews - with medals "For Courage". In October, our 41 unit was completely broken. ”

In 1941, fighters and commanders rarely spoiled the awards, to say the least. And then - in one battle, the platoon commander was awarded the order, his deputy received the order posthumously, the rest of the tankers received the medal “For Courage”. For that terrible time - generous rewards. And there is a reason. The tank platoon was able to complete the task assigned to him.

In another situation, one could rely, for example, on aerial reconnaissance. But ... were there any people in the fall of forty-one who were up in the air, were there still any combat-capable planes?

It would have been possible to try not to drive tanks under fire, but to send foot reconnaissance — if only there were trained fighters there capable of detecting German guns. And if they were not there, it remained only to expose extremely vulnerable tanks under artillery fire, relying on the courage of the tankers.

Yes, one T-26 was burned, the other was hit, but it was possible to put on the tablet the coordinates of the heavily annoying German guns. Yes, three more tanks were able to return under their own power from the village. Success, according to the forty-first year ...

Ctrl Enter
Noticed a mistake Highlight text and press. Ctrl + Enter
We are
Two tank battles of the Soviet-Finnish war 1939-40.Captain A.V. Marievsky: German cars were against *** T-34
40 comments
Information
Dear reader, to leave comments on the publication, you must to register.