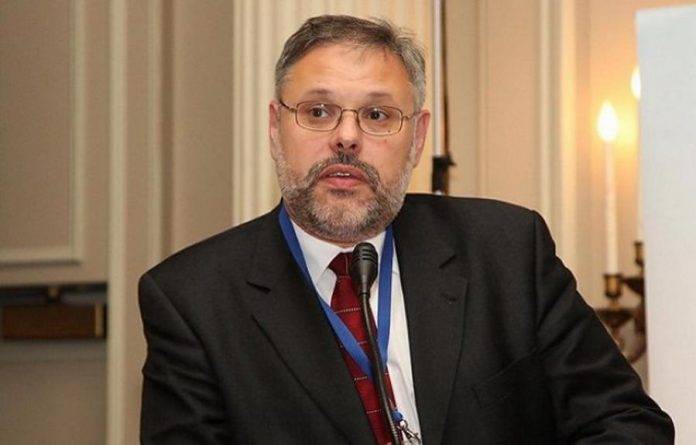 - Mikhail Leonidovich, how would you comment on the current results of the voting on the attitude of our readers to the events of October 1917 of the year?

- Numerous polls that I conducted when I was on the radio station “Moscow Says”, both direct and indirect, showed that the level of support for Stalin’s figure today is about 80% of our population.

Of course, from a formal point of view, these polls seem to be quite controversial, because they are not quite representative, because the listeners "Moscow Says" are already some kind of specific sample, and even more so if we are talking about the listeners of my program.

Voting on TVC, held on the day of the centenary anniversary of the Great October Socialist Revolution, showed that 82% of the polled citizens were approved of the Revolution, but at the same time 90% would not like to repeat it ...

- They gave the second figure there with reference to VTsIOM ...

- …Yes. It should be understood that VTsIOM is an organization that regularly adjusts its results to pre-agreed parameters, plus I don’t know what specific issues there were.

Well, for example, if you ask a question like this: “Do you agree that today, to improve the situation, you need only such a bloody revolution like in October 1917 of the year?”, Then there will be one answer. And if: “Are you ready to participate in the same anti-oligarchic revolution that took place on October 1917 of the year?”, The answer will be completely different.

Note that there is one very important circumstance.

And the civil war, and many other consequences of the revolution, it is not at all possible that they would have occurred regardless of whether the revolution itself happened or not. I remind you that very similar negative events took place in the 90s, after the destruction of the USSR, when the revolution was completely non-communist.

Someone will say that no, there was no civil war ... Well, firstly, it was here and there, and secondly, it must be taken into account that unlike 17, in 90, there were no there was foreign intervention.

By the way, we also lost quite a significant part of the territory along with the population and their economic potential. Note also that it was not the Bolsheviks who started the Civil War, the very same people started the Civil War as in February 17 threw off the Tsar-Father.

In any case, I treat the TVC figure in 82% supporting the October Revolution with confidence, because it corresponds with the figures in support of Stalin.

I draw attention to the fact that support for Stalin is not support historical figures with her real deeds, and this is the support of some already archetypal image, such a strict father of the nation. In general, today the image of Stalin in our country is positive among the population. Moreover, his main emphasis, that is, with what he is associated, is control over officials.

In other words, the people want Stalin, because he believes that he will force officials and oligarchs to submit to society. It should be noted that this one-to-one image fits into the Byzantine concept of Catehon as a defender of the people, including from the arbitrariness of the boyars and oligarchs. That is, in this sense, at the next historical turn, we reproduced the old Byzantine concept, which just tells us that Russia is a deeply Orthodox country.

Due to the fact that it was very interesting to us, how much VTsIOM distorts the real situation, and how truly the survey from TVC is adequate to the situation, we also made our own survey. And they made it more detailed than the questions that were presented at the TVC. And found the following result:

How do you feel about the October Revolution?

That is, in total, we get 85%. Which very well coincides with the figures of TVC. I note that in any polls of this type, plus or minus three percent is the norm.

That is, in other words, we see that, on the whole, 85% of the population is positively related to the Revolution, but at the same time 15% believes that it would be better not to repeat this.

15% is somewhere around one sixth, one seventh of the population. Approximately another 7% says: “I treat negatively, but objectively I understand that everything goes to the fact that all this will happen again,” then nothing can be done here. And a little less than 6% declares "I treat negatively and believe that this will never happen again."

In a word, there are very few people who reject the Revolution and believe that it should not happen again. Very little. That is, from the point of view of public influence, they do not play any role.

Thus, we see that our survey, the respondents of which, of course, in the audience correlate with something with the group that listened to me at Moscow Says. So, they correlate rather ideologically. But we see that the result is about the same.

People who are interested in their past, in their history, who are inclined to study this story, and not to watch meaningless films on the main channels where the story is today interpreted demonstratively cynically, these people fit into a fairly clear structure.

Approximately 80% of the population understand that the events that occurred 100 years ago in Russia were inevitable. And most likely they will be repeated. But at the same time, about a fifth of them think that it would be better if this were not, while being aware that it is almost impossible to change the historical flow.

The remaining 20% are divided approximately in half. These are people who do not approve of these events, although at the same time, half of them understand that they are likely to repeat, and people who believe that everything needs to be done so that all this does not categorically repeat itself. That's all.

- Then a logical question. What are the dangers for the country poses a situation in which 80% of society is ready to support the revolution, or at least not resist it, given that it is considered that our society is very apolitical now. Does all this carry the risks associated with the fact that some conditional Navalny will pick up the banner of this mood?

- It is necessary to realize that the support of the revolution and active participation in the revolution are two big differences. People, even those who believe that it should be, are passive. for example, if we look at the events of the Civil War, we will see that not many people directly participated in the war, although a lot of blood was spilled. Known stories when Kolchak cut out entire villages in Siberia, simply because he did not like that some people left those villages to go to red.

In such a situation, people for the most part understand that they can become victims. Therefore, they themselves will not stimulate action. But at the same time, if they happen, then this feeling of justice “is so necessary for these freaks,” it will certainly be very strong.

By the way, all attempts to protect, for example, the church, like, the Bolsheviks offended her, - looking at the current behavior of the hierarchs and many other ecclesiastical, we see that the attitude towards them, apparently, was even worse than now. And this is not a consequence of anti-Orthodox propaganda. Anti-church propaganda in the USSR, for example, was very weakly influenced by the Orthodox people’s world view. Exactly because everyone understood its artificiality.

So if we talk about the organization of the revolution today, then people like Navalny cannot organize it. These are people who sincerely want to give the revolution of 91 year bourgeois purity.

They say that a very correct event happened in 91 — a misanthropic communist regime collapsed, and noble bourgeois came to power, but, unfortunately, because of some blunders, including aspiring commies This regime turned out to be corrupt, and for this reason the people do not like it, and the people believe that the problem here is not that people are bad, but simply a bad realization of the ideas of capitalism. Therefore, it is only necessary to restore the virginal purity of these capitalist ideas, expel all corrupt officials, and everyone will be happy.

I draw your attention to the fact that anti-corruption ideas were in February of 17, and then the regime collapsed in less than a year. And in 90, there were two attempts to eliminate this regime. The first was in the 93 year, there was the second - the failed Rokhlin coup, and the election of the 96 year can be remembered. There was, perhaps, an attempt, after the default of 98 year. But she was more passive, and did not receive public support, because Primakov and Maslyakov did not try to fight the government, but tried to change the control system and did not fight with the government.

So, if we look at the situation, we will understand that the people have already understood that it is not necessary to expect anything good, reasonable and eternal, and most importantly non-corrupt, from Russian capitalism. For this reason, if someone initiates a revolution, it will be with strong socialist tendencies, and not with bourgeois ones. Therefore, all attempts by Navalny and someone else to dress capitalism in white clothes will not be supported by society.

These same 80%, which we are talking about in different ways, will support exclusively socialist ideas. And this line gets more and more support in the West.

As the living standard of the population falls, the idea that we need to recall the left-wing conservative ideas that were in the USSR are becoming more and more powerful. It is for this reason that the liberal authorities of Russia have done everything to ensure that the centuries of the October Revolution did not exist and it was not celebrated in any way. What is terrible sabotage from the point of view of Russia's interests, because it would be very easy to raise Russia's prestige and respect for it by properly celebrating this century.

Ctrl Enter
Noticed oshЫbku Highlight text and press. Ctrl + Enter
We are
About Stalin and KhrushchevYou can not win - join
91 comment
Information
Dear reader, to leave comments on the publication, you must to register.