Is Trump an Enemy of the American People?

November 16 2017
16
Trusting Putin is a big mistake. Mr Trump, who trusts Putin, is either a naive type or a pest acting contrary to the interests of US national security. So says Senator McCain. 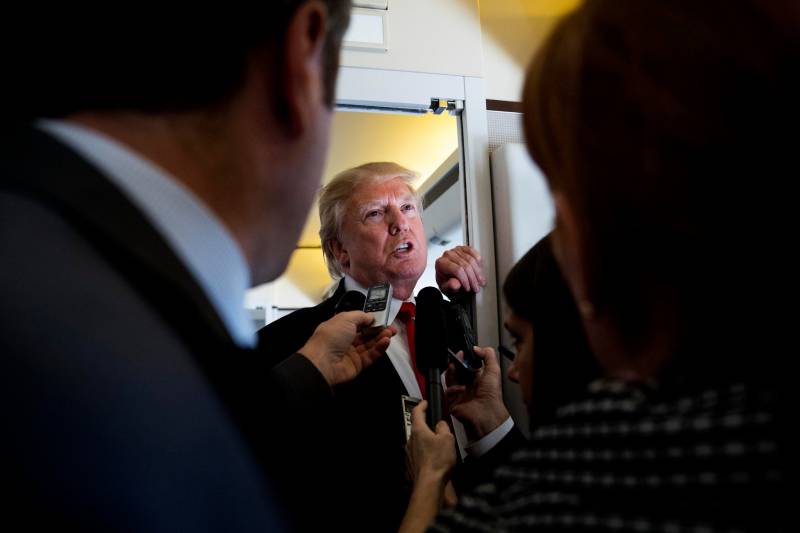 Donald Trump said that Putin "sincerely" refuted Kremlin interference in US presidential elections. According to Trump, which was repeated by all the leading newspapers in the world, theses on the role of Moscow are a politically motivated “order”. And this “order” prevents America from cooperating with Russia on a number of vital issues.

At a meeting with Putin on the margins of the APEC summit, Mr. Trump asked if the Russians interfered in the American election race. According to Trump, close attention to this issue is “offensive” for Putin. Therefore, according to Trump, "it's time to leave this question." The United States and the Russian Federation should cooperate in countering the nuclear threat from the DPRK and ending the war in Syria. In addition, cooperation in Ukraine is also relevant.

He told the journalists who accompanied Trump on a trip: “He [Putin] said he did not interfere, I asked him again about this.”

“Every time we meet, he [Putin] says that he didn’t, and I really think that when he says that to me, he’s absolutely serious,” added Trump.

However, the direct question about whether the US president believes in Putin's refutations, he chose to avoid the answer. And even that version of the conversation with Putin, which Trump himself adheres to, testifies: he is inclined to accept the statements of the Russian president despite the assurances of American intelligence officers who are convinced of Moscow’s interference in the election of the 2016 of the year.

Why does Trump make such overtures to Putin? The material indicates that the statements were made by the American president against the background of investigating Mr. Trump’s campaign headquarters with the Russians, and recent revelations have already shown: there have been more contacts between advisers to the election campaign and people from Russia than has been established so far.

It is curious that the very next day Mr. Trump, in fact, abandoned his own fervent speeches. According to him, he does not dispute the findings of the US intelligence community, according to which the Kremlin intervened in the presidential election.

Senator John McCain gave an angry rebuke to Mr. Trump and almost called him an enemy of the American people. The chairman of the Senate Armed Services Committee said that nothing was left of Trump's slogan “America first”.

President Trump, we add, in response to this, broke out in a short but expressive speech in "Twitter" - networks where he regularly “chirps”.

“When will all the haters and fools understand that good relations with Russia are good, not bad?” Trump exclaimed.

After all, these “haters” are bad, and meanwhile Trump is going to solve the problems of North Korea, Syria, Ukraine, terrorism, and Russia “can help a lot with this!”

Trump's statements in this editorial are called "protection" by Trump "by Russian leader Vladimir Putin." This “defense”, according to the editors, includes Trump’s trust in Putin, who refused to recognize Russian “interference” in US elections. In addition, Mr. Trump later "called for pragmatism" when he wrote on Twitter about "good, not bad."

"Theoretically," the Washington Post considers the last rebuff to the "haters" ... to be true! However, this view of the newspaper is a simple irony. “The problem, however, is that Mr Putin consistently ignores the agreement, and instead of that, undermines the US and its allied governments. He promises cooperation, but in practice he seeks to put obstacles to the United States, as well as to demoralize and divide Western democracies, ”the publication said.

Secretary of State Rex Tillerson, who is well acquainted with Mr. Putin, should know "and this is his duplicity," the editorial board continues to blame. Nevertheless, he “worked hard” on agreements with the Kremlin. For example, last Saturday, the US State Department announced a new agreement with Moscow on Syria, which obliges Russia to ensure the withdrawal of Iranian forces from the country and achieve a transition to the peace process, which should culminate in elections of the new government with the participation of international observers. Like several earlier agreements on Syria concluded by Russia under John Kerry, the predecessor of Mr. Tillerson, "it sounds too good to be true." Most likely, this will go to ashes, "like all previous agreements."

The new agreement is a continuation of the theme of "de-escalation zone" in southwest Syria. Hezbollah units, Iranian troops and Shiite militias, which Tehran delivered from Iraq and Afghanistan, must withdraw from the region.

When US officials were asked at a briefing how Russia would “force” Iranians to leave those areas and how it would oblige the Assad regime to hold “fair elections”, they simply nodded at the agreement as the only answer. It was “Mr. Kerry’s echo”: he also tirelessly argued that Russia should follow its obligations in Syria. When Russia “violated these obligations, Mr. Kerry insisted that Moscow be given another chance,” the newspaper’s editorial board laughs.

That is why Mr. Tillerson and the Trump administration as a whole turned out to be “on the same merry-go-round”. US officials simply believe that they have “some leverage.”

Will Mr. Tillerson avoid “the silly mistake of Mr. Trump”, who firmly believes that Putin will indeed fulfill his promises?

The editors did not answer this question. Apparently, futurologists in the state edition does not hold.

In principle, we note the violent reaction to the recent statements by Trump and the major press and intelligence services (including former intelligence chiefs, see this in the previous "Project" ZZ ") is not surprising.

After all, Trump has publicly expressed his confidence in Putin! By itself, such a statement is already a reason for scandal - especially if we recall that an investigation is underway on the issue of the “connections” of the Trump team with the Russians, in which both intelligence services and congressmen, primarily “hawks”, are involved.

That is why McCain and his friends again took up arms against the President of the United States: after all, “the words of the KGB colonel,” Trump dared to prefer “to the words of the American intelligence community”!

As for the intelligence community itself, it has fallen into the awkward position of the exposed cheaters. And they were “made” by the liars none other than Mr. Trump himself: you see, the CIA, the FBI and the US National Intelligence Service he does not believe, but Putin believes!

A flurry of indignation reached its goal: Trump surrendered. "I believe our special services", - with a sigh recognized the owner of the White House.

Observed and commented on Oleg Chuvakin
- especially for topwar.ru
Ctrl Enter
Noticed oshЫbku Highlight text and press. Ctrl + Enter
We are
Overseas ally? Donald Trump - US Presidential CandidateResults of the week. “Russians, surrender, we are a horde!” - “And us - army!”
16 comments
Information
Dear reader, to leave comments on the publication, you must to register.