November 15 2017
84
The Verkhovna Rada of Ukraine adopted amendments to the law “On the status of war veterans, guarantees of their social protection”. This is reported on the website of the Ukrainian parliament. The corresponding initiative (No. 5697), the text of which is published on the website of the legislature, was voted 241 MP. 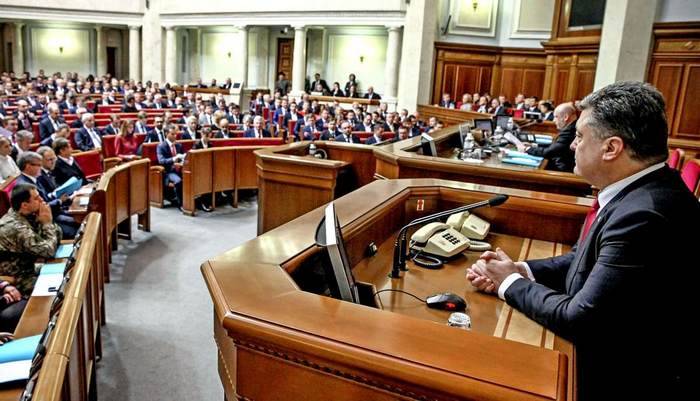 With the same amendments, the term “Revolution of Dignity” was formalized, previously referred to as “mass actions of civil protest in Ukraine from 21 November 2013 of the year 21 in February to 2014 for European integration and against the Yanukovych regime”. Also to the injured Maidan activists will be given the status of a combatant.

Since May 2015, Ukraine has a law on the condemnation of the communist and national socialist regimes. The document prohibits the manufacture and public use of Soviet symbols, in particular the image of flags and emblems, as well as the public performance of the hymns of the USSR, the Ukrainian and other Soviet republics. Monuments to the participants of the Second World War are not subject to the law, reports "Lenta.ru"

Ctrl Enter
Noticed oshЫbku Highlight text and press. Ctrl + Enter
We are
The Verkhovna Rada "renamed" 151 a settlement in Crimea, the DPR and LPRNew victory of Ukraine: Verkhovna Rada renamed the airport of Simferopol
84 comments
Information
Dear reader, to leave comments on the publication, you must to register.