Legal occupation of the United States in Syria 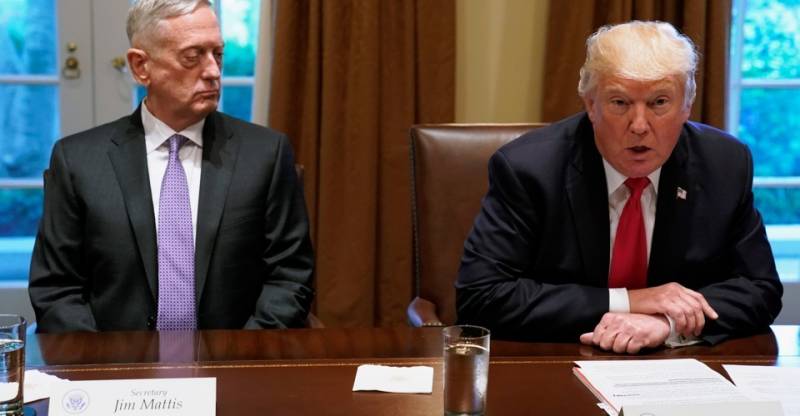 It seems that the United States is becoming less and less sober-minded civil servants. Judging by the inadequate statements that have been heard lately from overseas, the number of political clowns in the country has been steadily growing, and the United States itself is becoming more and more like a circus arena.

The other day, the head of the Pentagon, James Mattis, appeared as a ridicule, disgracing himself to the whole world during his speech at a press conference. To verify this, just go to the US Department of Defense website, where the transcript of the event is published.

In general, Mattis asked questions related to US foreign policy, including that pursued by Washington in the Middle East. The conversation also came about Syria, where, as you know, US military personnel are illegally stationed. Here came the finest hour of the head of the Pentagon and sensational statements.

Despite the generally accepted fact, Mattis tried to dispel doubts around the military presence of the United States, saying that the US army was acting in Syria legitimately, with the "permission" of the UN. They say that the UN adopted resolutions on the struggle against the Islamic state. For this purpose, the Americans are creating military bases in Syria.

It is possible that Mr. Mattis, speaking of the resolution, implied Article 51 of the UN Charter, which presupposes the use of military force by the state as self-defense in the event of an armed attack. After the September 11 attacks on the territory of New York in 2001, the UN Security Council expanded the interpretation of this article by adopting the 1368 resolution. This was supposed to contribute to the fight against international terrorism. But in fact, it was not without the facts of abuse of international law, which we see today in Syria.

The confrontation with radical militants gradually outgrew with the struggle against the current regime and the hated Assad, and support for the moderate opposition increased. While Russian aviation refrained from attacks on militants classified by Washington as non-terrorists, the United States began to destroy supporters of official Damascus. Imitating the fight against terrorists, they negotiated with the Ishilovites, as was the case in Raqqa.

In the past 6 months alone, the international coalition has attacked government forces three times: April 7 Americans used 59 Tomahawk missiles to attack Shyrat airbase in Homs province, May 18 and 6 in June, Western allies attacked pro-government forces in the US military base Et -Tanf.

Damascus’s position on this issue remains unchanged. Americans are considered invaders, violating the "foundations of the UN."

In turn, former UN Deputy Secretary General Sergei Ordzhonikidze ridiculed the statements of the current head of the Pentagon, who, in his opinion, was simply trying to “wriggle out” in an “inept and <...> even absurd way”.

But does anyone really care? Or are delusional claims only the case of former UN employees?
How not to recall the words of the commander of the special operations forces General Raymond Thomas during a speech at a security forum in Colorado:

“The day is not far when the Russians will say:“ Why are you still in Syria, USA? ”They were already close to this. We went there (to Syria) justifiably, but if the Russians play this card, then when we want to stay, we cannot do it. They (Russia) can do it. ”

This day came on November 9, when Abu Kemal's igil ceased to exist.

Ctrl Enter
Noticed oshЫbku Highlight text and press. Ctrl + Enter
We are
A great interview with Sergey Lavrov: about Ukraine, Obama and IranWhat you didn't want to know about England
Military Reviewin Yandex News
Military Reviewin Google News
14 comments
Information
Dear reader, to leave comments on the publication, you must to register.