November 15 2017
16
Terrorists have lost four villages in the northern part of Hama. Lt. Col. CAA died as a result of a suicide attack near Deir ez-Zor airport. Reports about it FAN with reference to local sources. 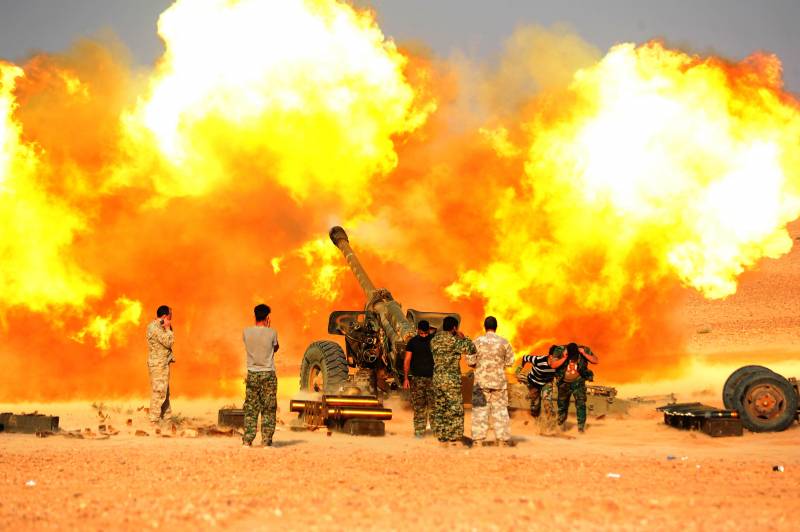 Throughout the day, armed clashes between Syrian troops and radical groups in the Eastern Guta oasis were observed on the outskirts of the villages of Zamalka, Irbin, Harasta and Masrab. South of Damascus, the conflict between the militants of the IG and Dzhebhat An-Nusra (both groups banned in the Russian Federation) intensified, the units of which divide the territories of the Al-Yarmuk refugee camp between them. The intensification of hostilities was provoked by the murder of one of the terrorists of the IS.

In the western part of the province of Aleppo, not far from the village of Kafr Naha, civilian clashes between Al-Nusra radicals and militants of the Harakat Nur ed-Din Az Zinki organization continued in the past 24 hours. The media controlled by An-Nusre claimed that Az-Zinki troops regularly raided against the civilian population in the village of Takad. Nevertheless, local activists denied this information, saying that An-Nusra’s radicals were abducting civilians. Also, both parties to the conflict accuse each other at the beginning of an armed conflict.

During the day, government forces continued to sweep the administrative center of the province of Deir ez-Zor. During the searches, the CAA and its allies managed to find a large warehouse with military equipment and ammunition. In the afternoon, the UAR strongholds at the city’s airport were attacked by an ISIS suicide bomber, as a result of which SAA Colonel Yousef Al-Ayni was killed, and several servicemen were injured. Meanwhile, the UAR forces resumed battles with the radicals of the Islamic State on the island of Katy. Due to the rapid advance of the Syrian troops, the terrorists agreed to arrange peace negotiations with the command of the CAA. By the evening it became known that the igilovtsy had lost their positions.

Syrian Democratic Forces (SDF) continue to seize territory as part of Operation Jazirah Storm. During the clashes, the city of Shahil southeast of Deir ez-Zor passed under the control of the Kurds. Local sources reported that the militants voluntarily left the city, following secret agreements with the SDF and the United States.

In the past day there were new explosions in the city of Rakka: detonated mines laid by terrorists of the IG. The explosion in the neighborhood of Al-Diraiya killed more than ten civilians. As a result of the second explosion, the “democratic forces” lost three fighters. In the afternoon it became known that a curfew was introduced in Al-Mashlab quarter. Earlier, many activists have noted cases of looting by the occupiers. Recall, local authorities also do not consider Raqqa as a liberated city, since the Kurds are nothing more than new invaders for them.

In the northern part of the Hama province, government troops, supported by the Russian Aerospace Forces, significantly succeeded. After intense strikes aviation The Russian Federation and the artillery of the SAA, having lost many radicals killed and wounded, the militants left their positions in the settlements of Rabiya, Muvayila and Tel Mahasar and Sarkha Kabliya.

Ctrl Enter
Noticed oshЫbku Highlight text and press. Ctrl + Enter
We are
The Iranian rocket plant in Banias was too tough for the Israeli Air Force. What does Tel Aviv fear? Details of the fight for Deir-ez-ZorReports from the militia of New Russia for 4-5 of October 2014 of the year
16 comments
Information
Dear reader, to leave comments on the publication, you must to register.