The shrines of the island of Cyprus (part 1)

It is unlikely that anyone will deny the enormous influence of religion on society. And the fact that some places on our planet turned out to be “more regional” than others is well known to everyone, including even non-believers. For various reasons, this happened, but it happened. There are places in Shinto, Buddhists, Muslims, Catholics. There are, of course, and the Orthodox. There is even a term such as “a prayer place,” that is, this is a place where people many times more than in other places prayed to the Most High. Such places include temples, monasteries, lands on which they are located, and even the whole island of Cyprus, which is sometimes even called “the island of saints,” as there are so many different temples built in honor of the saints of God. And since today, in Russia, the Christian faith seems to be experiencing its new flourishing, then you need to know about it. And we will tell you about it today. Of course, it would be more logical to write about it in "hot pursuit" of the year in 2015, but one of my shortcomings is that it is well written to me just in the mood. Which should fit the topic. And a lot of time passed before the “stars came together” and ... this material appeared. However, it's better late than never! 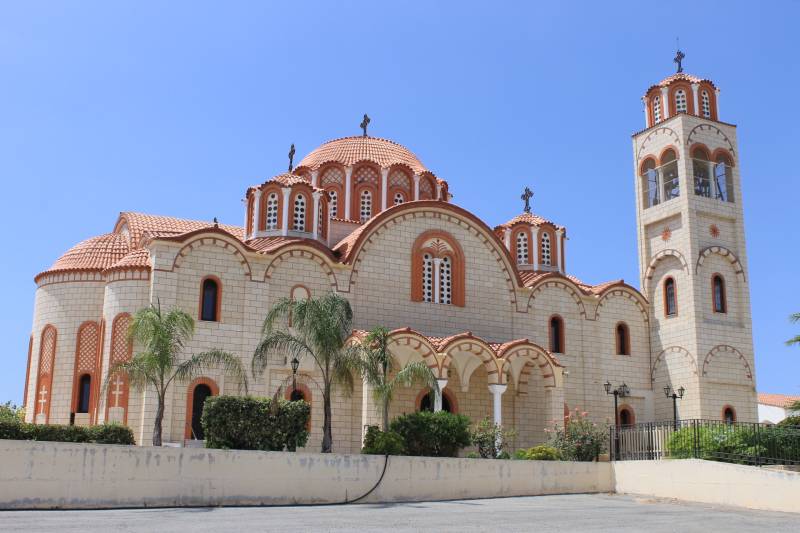 The first Cypriot church with which I managed to get acquainted. Saw on the hill. And she seemed so beautiful to me that she got on the bus and drove off. Came out, and she - like this, as if from a fairy tale. Inside - no one (it was a very hot day!), Come in, look. Very cold water flows from the wall and a number of cups - take drink. And the paintings ... Awesome! And it is clear that the church is new, and the paintings are new, and still it is very beautiful. And all the canons are met! Our churches are also very beautiful, majestic, fundamental, and even “St. Basil’s Blessed One” is generally something, but these are also beautiful in their own way ... 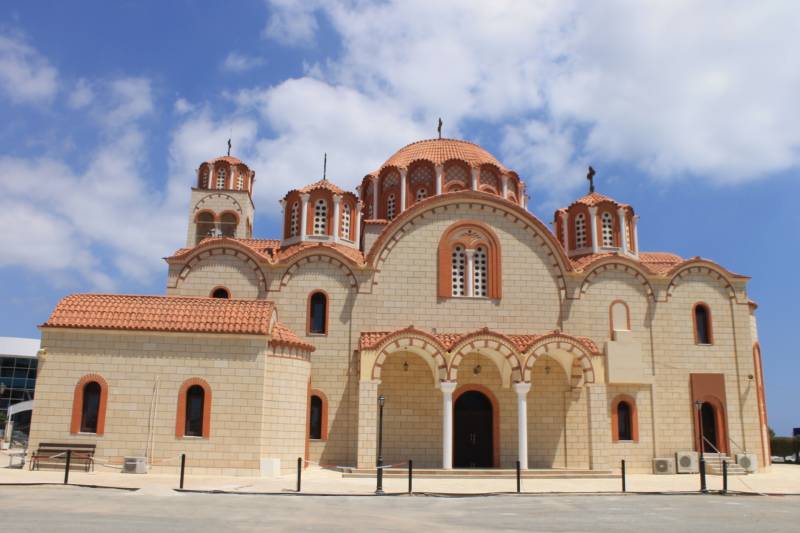 The same church is on the other side. 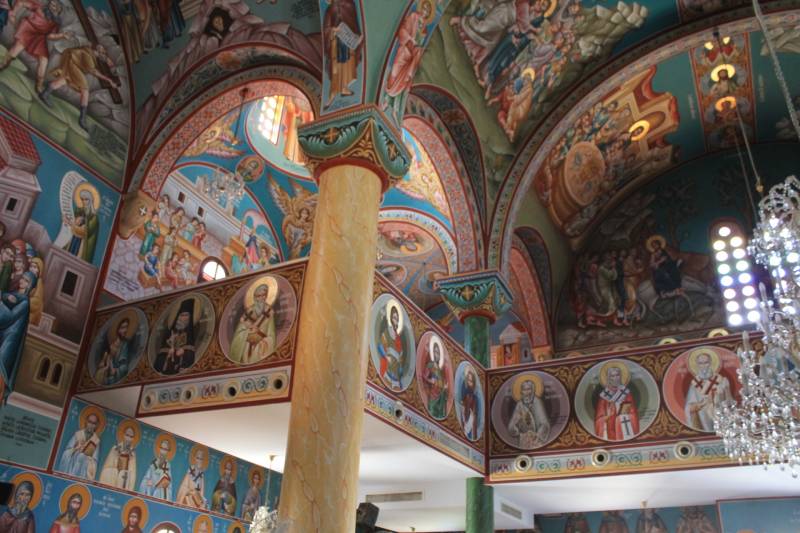 And this is how it looks from the inside! 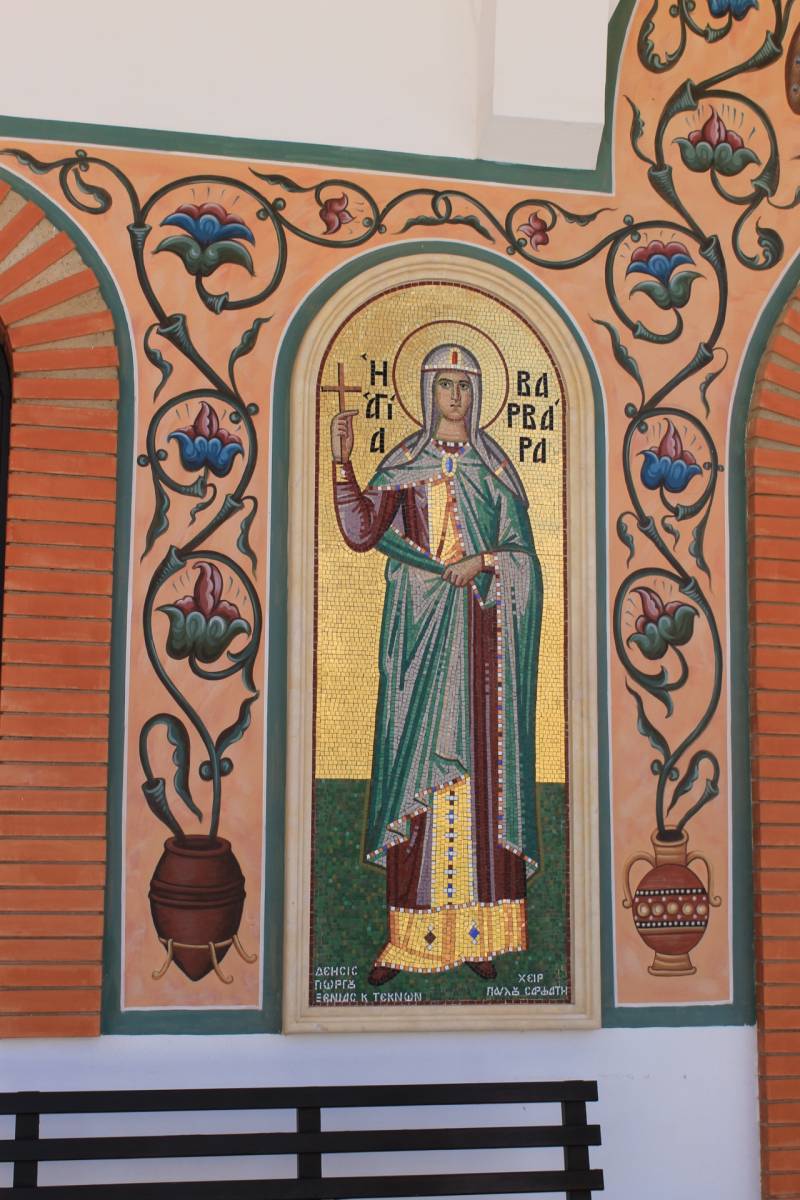 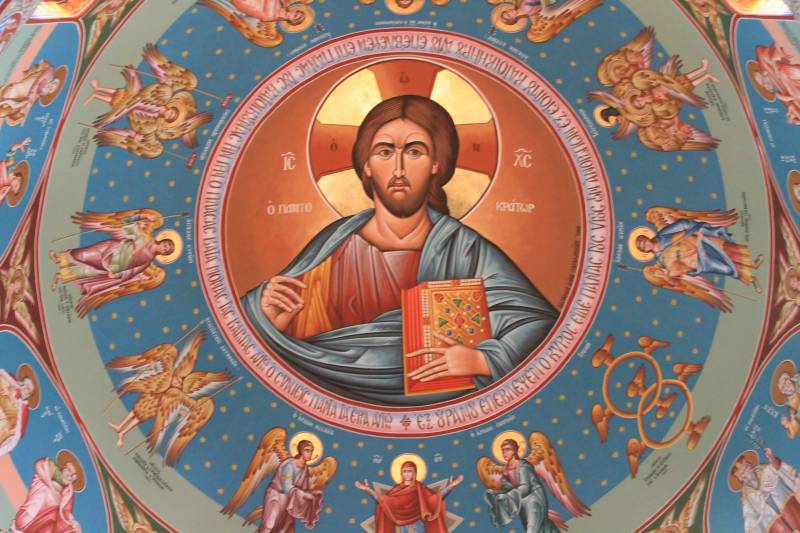 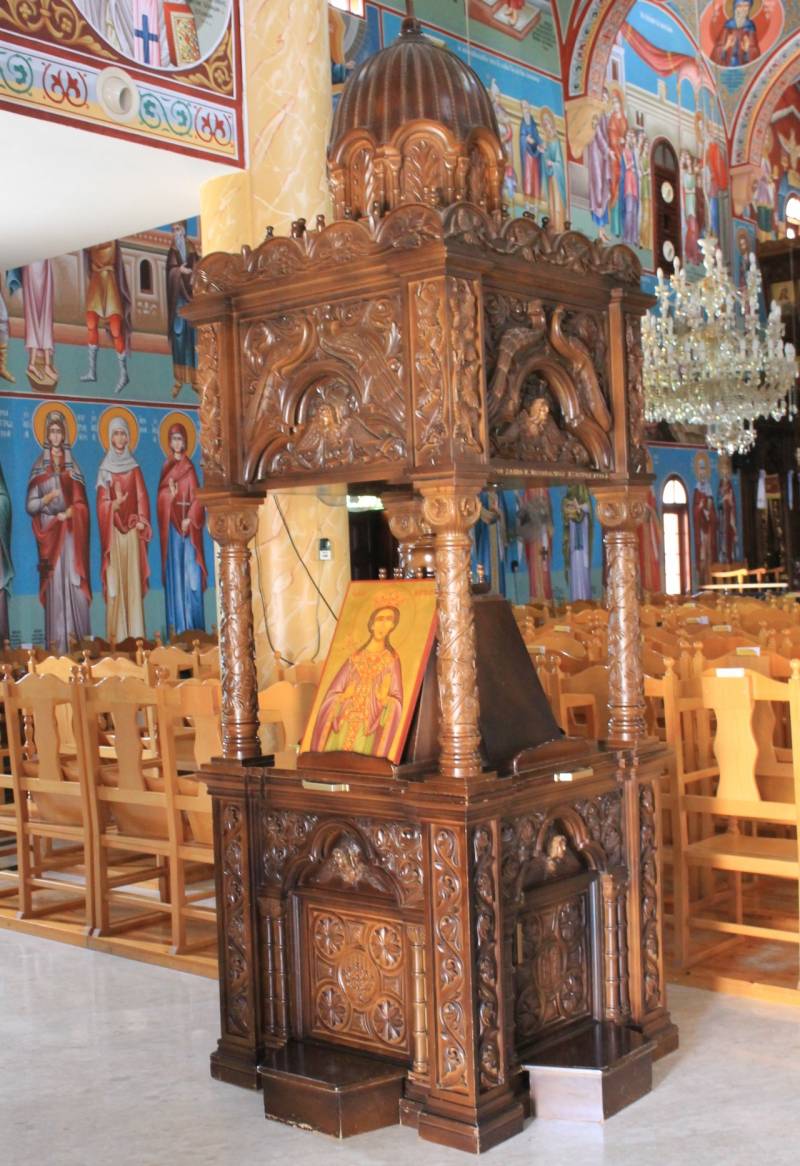 And the carving there is very beautiful ... 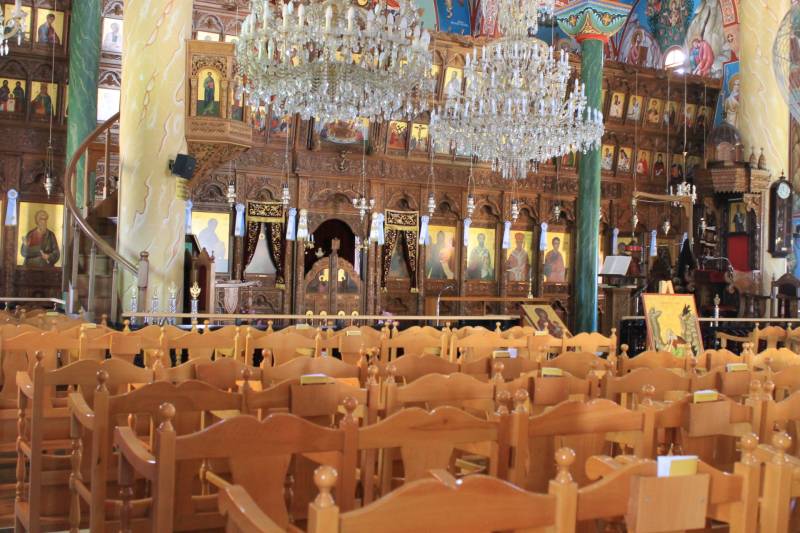 And in the Greek church do not stand, and sit. Nothing should distract the believer from communion with God, no physical inconvenience!

First, get acquainted with historical facts. In accordance with them, the Holy Apostles Paul, Barnabas and Mark brought Christianity to Cyprus. However, even before their arrival on the island, there were already separate Christian communities. The book “Acts of the Apostles” tells us that the holy apostles Paul and Barnabas went around the whole island, that is, they spent considerable time on it. Interestingly, the bishop of the Christian community on it was St. Lazarus himself, well, the very one whom Jesus Christ himself resurrected. Many saints were born on the island, and the Autocephaly of the Church of Cyprus was approved at the Third Ecumenical Council. And although this happened a very, very long time ago, the Greek Cypriots are still a very pious and pious people. Here and today many temples rise, both old and completely new, which are filled with worshipers on Sundays and holidays. Moreover, in one small village there may be several temples at once and this does not surprise anyone. 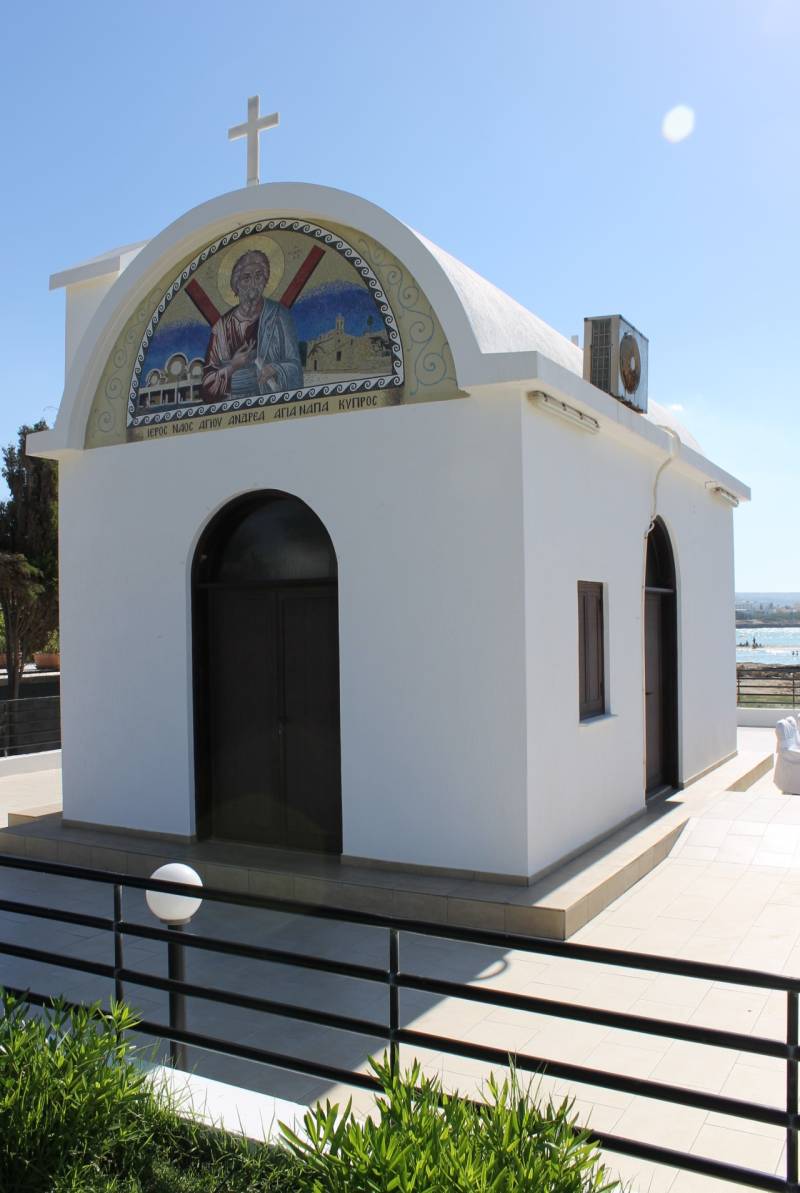 One of these "coastal" chapels!

In Ayia Napa, chapels stand right along the coast within walking distance of the beaches. So you can swim, then take a decent look and pray to the Lord. Or vice versa: pray first, and only then bathe. Among the saints in Cyprus, the holy martyr George the Victorious is considered one of the most revered, followed by the righteous Lazarus Four-day martyr Mamant, who lived on a mountain in the desert, martyred for Haralambos, tortured in 202, and the martyrs Timothy and Maura, who tortured him. in 286 year. 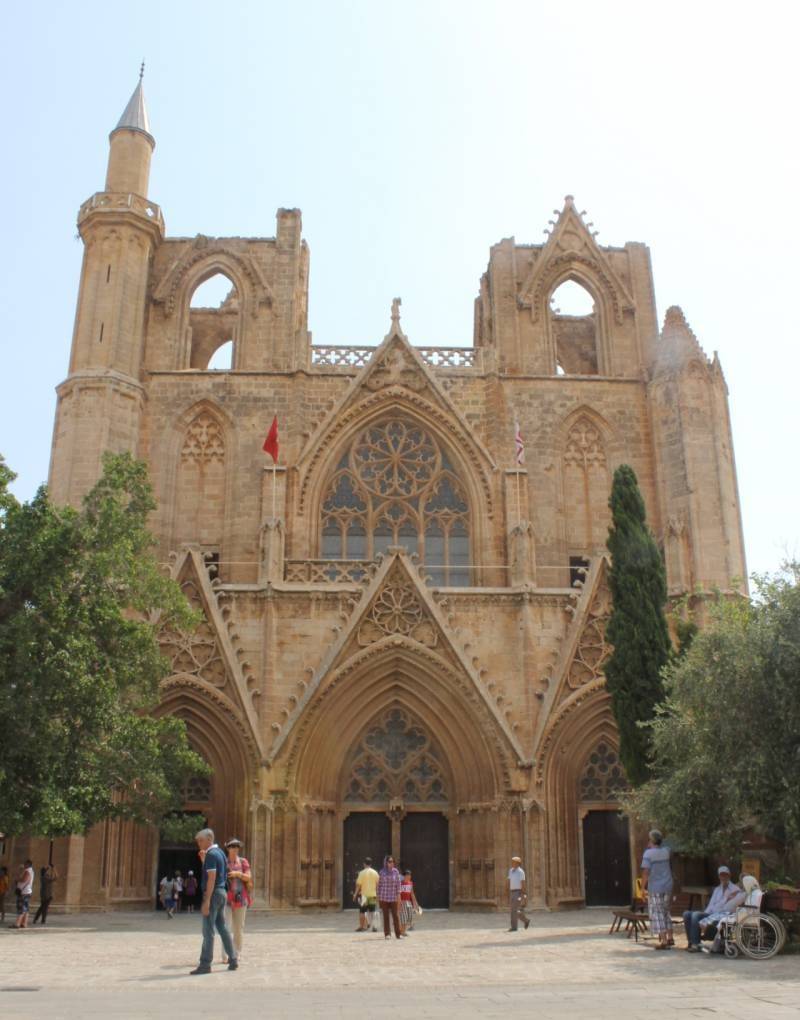 Cathedral of St. Nicholas XIV. Famagusta is practically a copy of Reims Cathedral, only yellow. Inside is a mosque. On the left - the minaret! 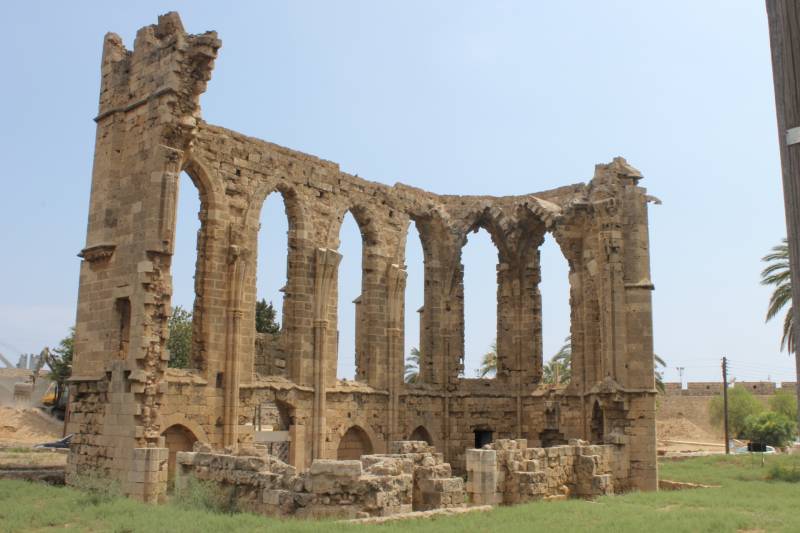 Cathedral of sv. George in Famagusta. The Greeks themselves are joking that there simply is nothing to add to the minaret, otherwise the Turks would have added it! 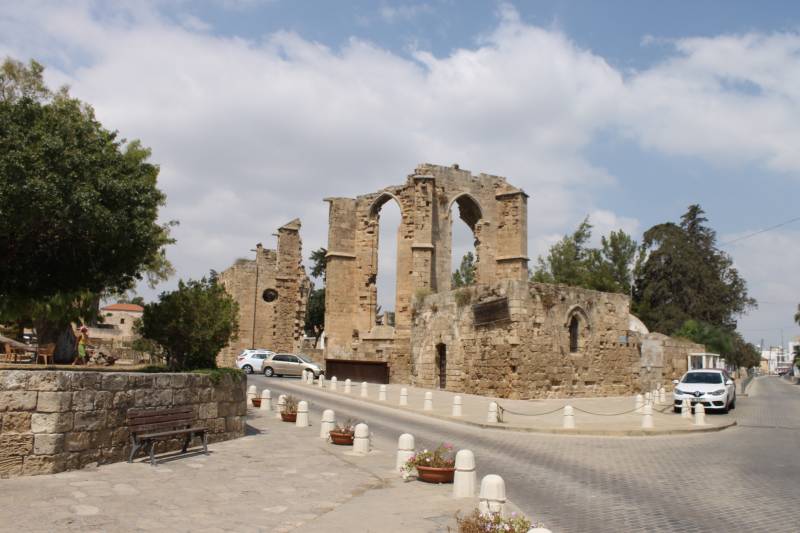 The same ruins, but on the other hand. Everything is very civilized around, isn't it?

In 1974, Turkish troops occupied the northern part of the island. Many Christian churches were then desecrated, and many were destroyed. Some of them, including the ancient cathedrals, were turned into mosques and even entertainment centers by the Turks. Many Christians, like centuries ago, were martyred at the hands of their local Turks, fellow villagers and Turkish soldiers. Recently, however, churches in a number of villages have been restored and the authorities no longer obstruct Orthodox Christians, as it was a couple of decades ago.

Well, now will follow the story of the Orthodox churches and shrines of the island of Cyprus on the basis of personal impressions, so to speak.

In the temple of the holy righteous Lazarus of the Four Days, the Bishop of Kition - this was the name of Larnaca in antiquity, I also got quite by accident. Others were interested in me there, but when I saw him, it was clear that we were heading into “this building” with the whole family. And it turned out that the word “Larnaca” in Greek means “sarcophagus”, and in this temple at the top there are the relics of this saint, and in the underground crypt - his tomb. There, in the crypt, there is a holy source. The relics of the saint were found in the XIX century here, in Larnaca, where they were found in a marble ark with the inscription: "Lazarus, who was dead for four days, a friend of Christ." Then, over his tomb, a temple was built in an old and rare architectural style. The iconostasis is not so ancient, only of the XVIII century. But the skill of its manufacture is one of the best examples of woodcarving, which can only be found in Cyprus. In it are 120 icons of the XVIII century, Byzantine letters. There are more ancient icons. Well, a Russian pilgrim can immediately notice there a large icon of the Blessed Virgin Mary, painted by icon painters from Russia. 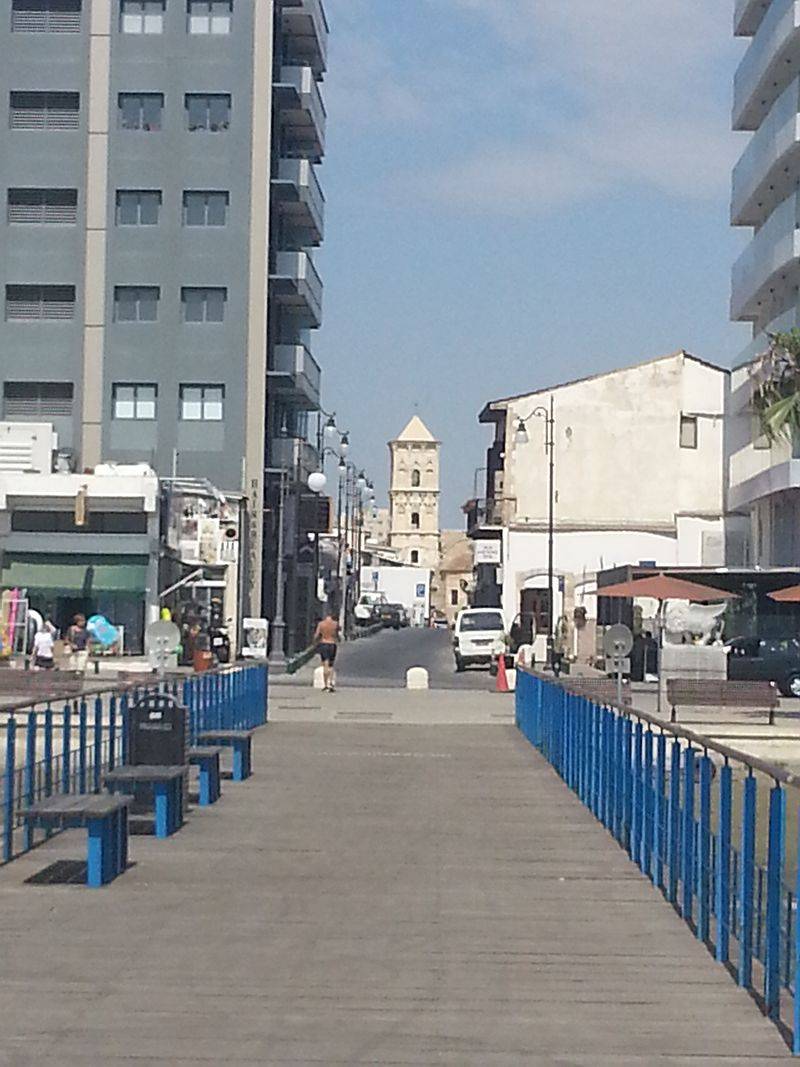 Temple of sv. Lazarus is located very close to the Larnaca seafront and the fort located at the end of it ... Here it is - the “road to the temple”. 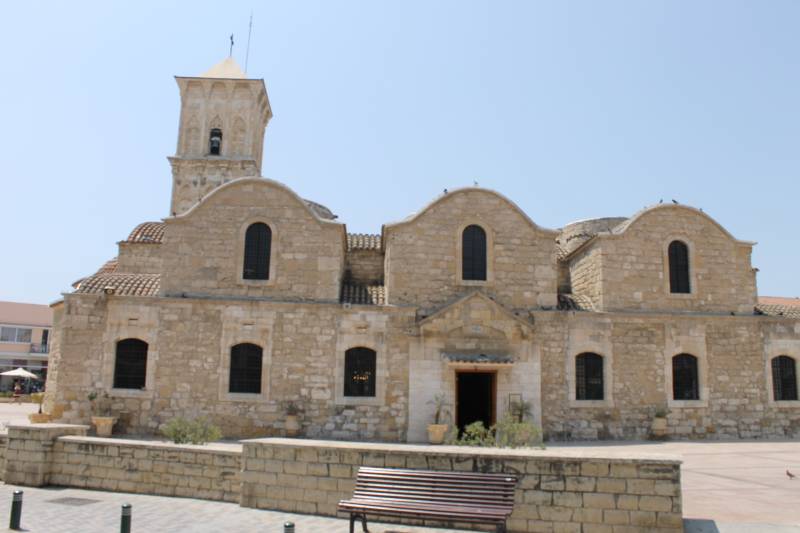 But he himself, repeatedly rebuilt. 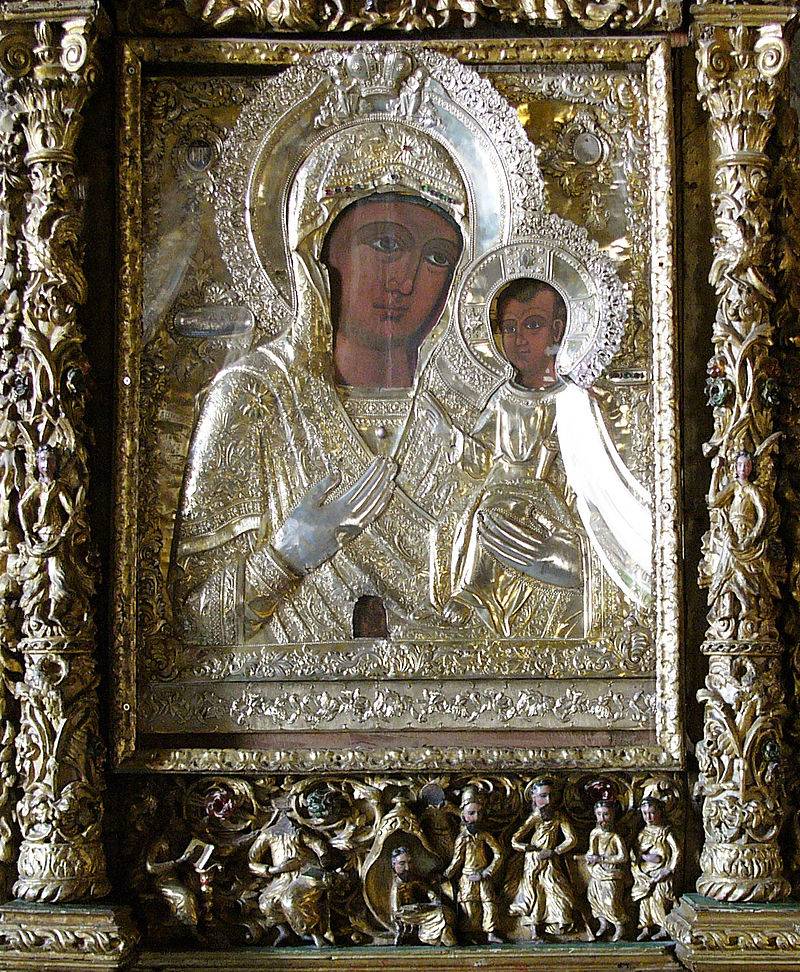 Icon of the Blessed Virgin in a silver setting. 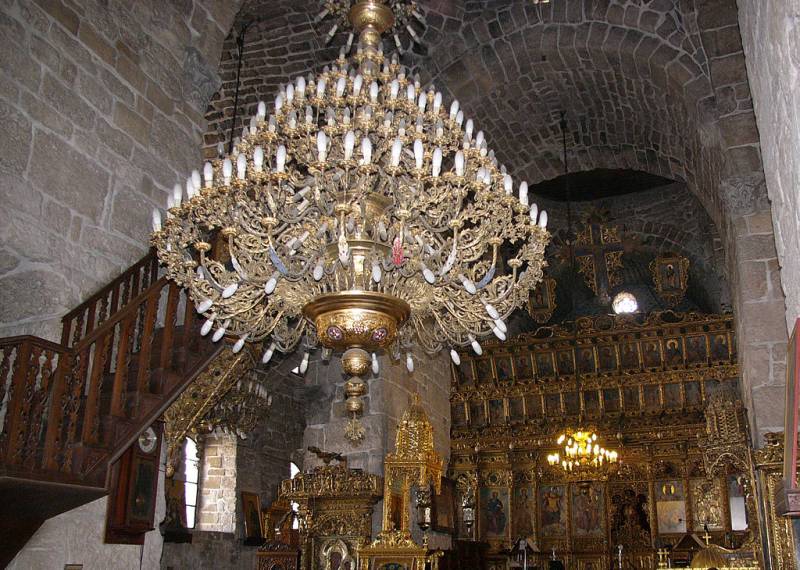 And there also hangs a stunning size and beauty of the chandelier, and the walls are made up of variegated in size and sometimes very large stone blocks laid on lime.

During the occupation of the island by the Franks, the temple was turned into a Benedektinsky monastery, then it became owned by Armenian Roman Catholics. In the 1570 year, the Turks seized Cyprus, but in the 1589 year they returned it to the Orthodox. And the Roman Catholics were allowed to perform service there twice a year in a small chapel adjacent to its altar from the north. But in 1794, they were deprived of this privilege, as the Catholics began to make claims on the entire church. Interestingly, the traces of the former Catholic presence are noticeable here and now. 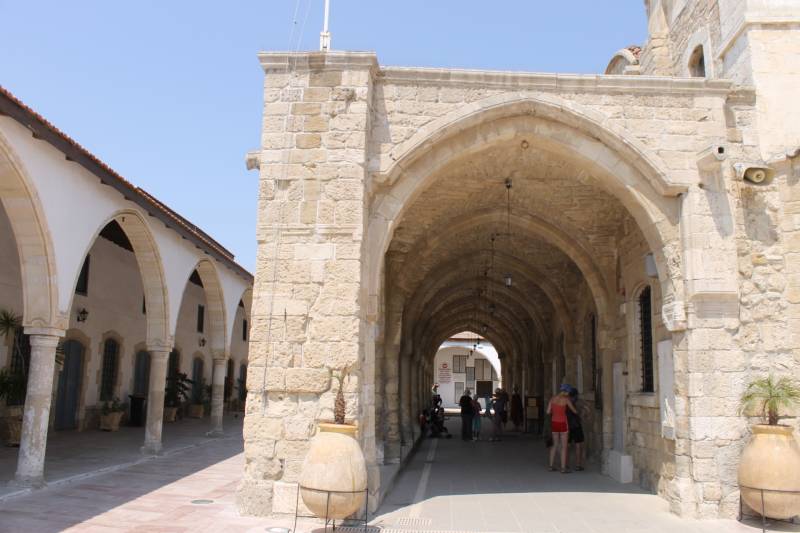 The Byzantine Emperor Leo VI the Wise ordered a portion of the relics of St. Lazarus to be transported to Constantinople, but the skull of the saint and a pair of tibial bones remained in Cyprus. Well, the relics from Constantinople were then abducted by the Crusaders, who took them to the West. By the way, they call him four days because he was dead for four days, and only after that Christ resurrected him. It happened on Saturday the sixth week of Great Lent, which has since been called the Lazarus Saturday. Many people then, seeing the resurrected Lazarus, believed in the Lord. But the evil Jews decided to kill Lazarus, which is why he left for Cyprus, where he lived 30 for years, having worked hard for the spread of Christianity on the island. And here he finally died a second time. And there was no one around who could revive him! 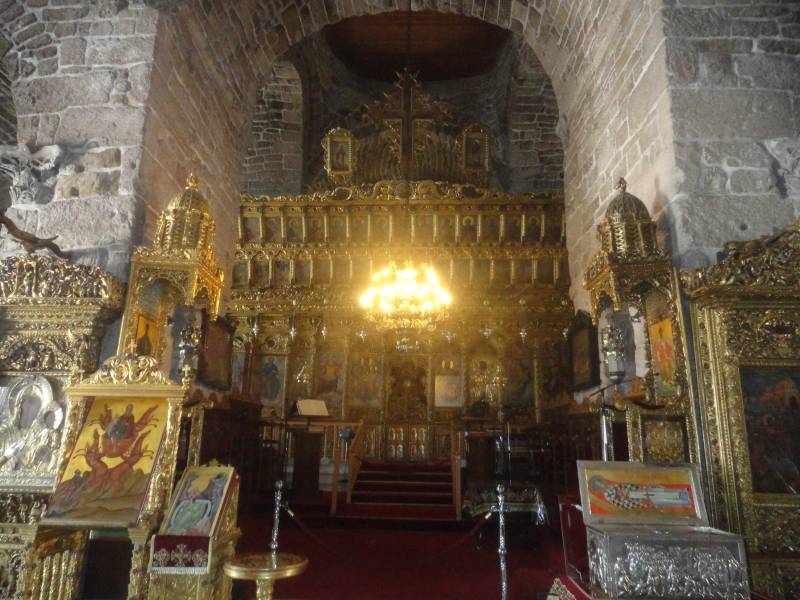 The altar of the temple, but on the right the cancer of St.. Lazarus. See that silver chest? Here it is the most cancer.

Once in the temple, we first paid attention to the shrine with the relics of the saint. It had a hole from which the brown vault of the skull protruded. Everyone approached and held his hand over him, after which they claimed that they felt a “flow of energy”. My daughter and wife also felt it, but my sinless granddaughter and I did not feel anything. After that, we went down to the dungeon, where it is better not to go into the claustrophobic patient. There was a whole family of Ethiopians who sang, prayed and for some reason put belt bows all the time. Black Ethiopians in the twilight, and even in white clothes ... In short, I really wanted to say: "Ethiopus, your mother, why do you scare people!" It was also amazing how people can bend at an angle of 90 degrees as many times in a row. 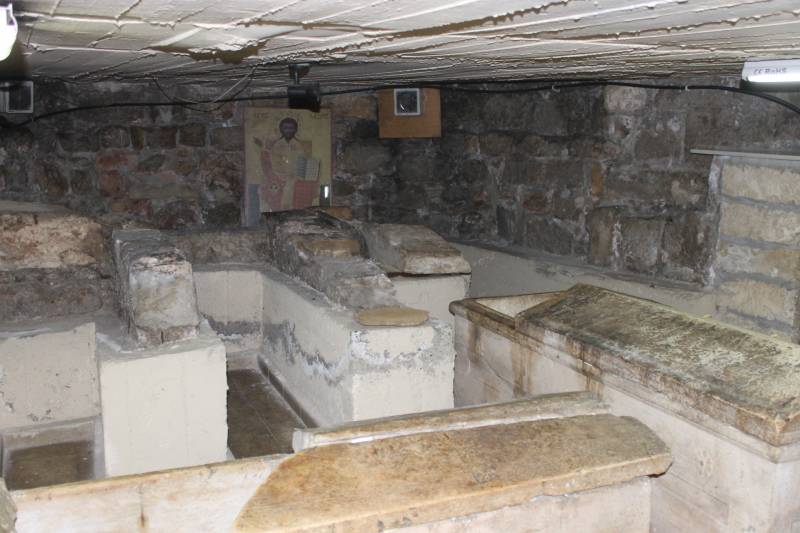 It looks like a dungeon and a long time in it, in my opinion, can only be abnormal!

Near the temple there is an interesting, just a very interesting museum, but I was not allowed to take pictures in it. Here the most ancient icons with the image of this righteous and other saints, as well as beautiful church utensils are exhibited. Only here you can see the rare image of St. Lazarus, written in the XII century (the saint on the icon is depicted in bishop's clothing). On another icon he is depicted blessing the emperor himself, with the Gospel in his left hand. However, there are a great many icons in the museum: both ancient Byzantine and post-Byzantine icons. Exhibited here are the old theological books, documents, and one of the oldest Gospels.

Ctrl Enter
Noticed oshЫbku Highlight text and press. Ctrl + Enter
We are
Chernobyl notebook. Part of 3Congratulations on the 285 anniversary of the birth of the Great Russian commander Alexander Vasilyevich Suvorov!
56 comments
Information
Dear reader, to leave comments on the publication, you must to register.