Not so simple and rosy. What is behind the impenetrability of igilovskogo fortified El-Kuriya - Wadi Bakiyah? 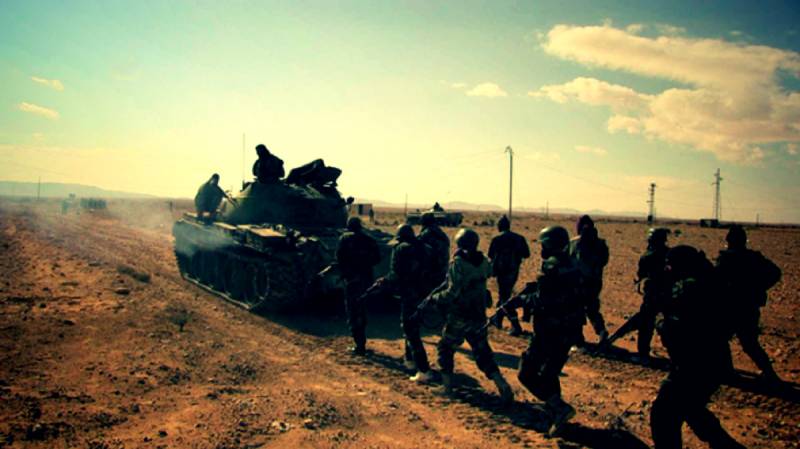 At the end of the previous week, numerous Russian and Western informational Internet resources and TV channels, with reference to several well-informed Syrian sources, spread alarmingly. news about the successful counter-offensive of the pseudo-caliphate in the eastern operational direction from Abu Kemal, which, according to the logic of things, as well as in accordance with the tactical situation, should have led to the inevitable displacement of units of the Syrian Arab Army, Hezbollah, Tiger Forces and Iraqi militias in desert, located in 5 km from the west coast of the Euphrates (in the direction of the pump station Т2). Just a few hours later, on Sunday evening, this message was refuted by representatives of the Russian Ministry of Defense, who called this information an unsubstantiated step by terrorists. Nevertheless, there is still no final information about the taking of the strategically important last outpost of terrorists under the control of the CAA, as well as photo and video reports (including amateur ones) pointing to this.

Obviously, the tactical situation here is extremely ambiguous, as evidenced not only by the western online map of hostilities syria.liveuamap.com, but also by our tactical map “MilitaryMaps”, well known for the detail and speed of providing information in the Donbas theater of operations. These maps are compiled on the basis of reports of numerous war correspondents and well-informed local people, which practically does not endow them with political engagement familiar to various news channels. Due to this, the degree of truthfulness remains more or less acceptable. Considering the western approaches to Abu-Kemal on these maps as early as the tenth of November, it was possible to notice that almost all the western districts of the city fell under the confident control of the SAR government forces, only a few days later it was possible to observe only conditional fire control of the city (CAA pushed aside 3 km to the west).

At the moment, Abu-Kemal is in the so-called tactical "semi-spinner" of month-shaped form, where the edges of the month provide fire control of the Abu-Kemal-Deir-ez-Zor highway and, in part, the eastern coast of the Euphrates. Nevertheless, in some miraculous way, in Abu Kemal and on its southern outskirts, impressive reinforcements will continue to be advanced from hundreds of new ISIL fighters, which do not allow the Syrian armed forces to finally liberate the city. At the moment, the hardest battles continue there, and even the units of the regular Iraqi army did not help to change the situation. Does it seem supernatural to you? Perhaps, but if you look at the width of the Euphrates in the area of ​​Abu Kemal (about 250 meters), everything immediately falls into place. On the opposite bank is the last surviving enclave of ISIS, which extends 220 km from Baguz town (near the Syrian-Iraq border and the Euphrates) to Khatunyah (Hassek province). If we assess the situation objectively, this enclave is under the strict supervision of the superior number of Kurdish SDF formations supported by the Special Operations Forces and the US Marine Corps, but the Kurds on the western coast are not in a hurry to carry out their operations.

This is not a discovery, because for the VTS this enclave of the IG is the main tool for harrying the Syrian army units on the outskirts of Abu Kemal. All the material and technical support, as well as the transfer of new militants to the pseudo-caliphs' defenders holding the city, is carried out through the narrow 250-meter riverbed. At the same time, the transfer of ammunition and armaments can be made both in surface mode at night, and during the day using various semi-submerged platforms. It is simply impossible to explain otherwise the preservation of the military stability of the pseudo-caliph groups in Abu Kemal. As you already understood, the Kurds and Americans will continue to try to repel Abu Kemal from the CAA with the hands of terrorists, and we can see far more than one counterattack on the AAA and Hezbollah units liberating the city. This is evidenced by data from Syrian and Western European sources on the day of November 14.

In the first case, the British news agency BBC News published simply devastating and revealing material about the extremely "interesting" moments of the liberation of the Syrian city of Raqqa by the Kurdish forces. For the first time, a well-known Western European source announced the conclusion of a deal between the allied Syrian Democratic Forces and the IS field commanders regarding the unhindered withdrawal of terrorist groups from the besieged city. So, according to the driver of one of several convoys, an impressive cash bonus was issued for the export of militants. This was well known both in London and in Washington. In the second case, with reference to the command of the Russian Air Force, it became known that the tactical aviation The United Air Force coalition tried to suppress the work of electronic intelligence from the Russian Aerospace Forces in the airspace above Abu Kemal. The purpose of this action was to prevent the identification of retreating units of military equipment by the IL by means of Russian combat aircraft.

More importantly, guided by the provisions of the Geneva Convention on the Treatment of Prisoners of War, the coalition forces together with the SDF refused to destroy the IS forces retreating from Abu Kemal, and also allowed the artillery batteries of terrorists to move away from the West Bank of the Euphrates towards the village of Baguz Fowan. It is obvious that the States are trying to preserve the eastern enclave of the IS, since its mission to Abu Kemal does not end. In particular, these retreating forces can be reused in the counteroffensive on Abu Kemal from the northern operational direction.

We are talking about one of the most powerful acting fortified ISIS on the west coast of the Euphrates - "El-Kuria - Wadi Bakii". This 62-kilometer stretch extends from the northern neighborhood of Abu Kemal to the city of Meyadin and has a width from 10 to 25 and more than kilometers. Now it can be stated with confidence that this section of the western enclave of the IG, adjacent to the Euphrates, has the most tactically designed system of defensive opornikov terrorists. This conclusion is confirmed by the fact that during the 3,5 week after the start of the offensive operation on Abu Kemal, the Syrian Arab Army, with the greatest possible support from aviation, the Russian space forces could not move south along the river even one kilometer. Al-Asharah and Abu Hammam settlements continue to remain under the control of the pseudo-caliphate, despite the fact that a month ago the command of the CAA and the Russian Aerospace Forces were full of optimism about the planned attack on Abu Kemal along the Euphrates coast. As a result, we saw that the government forces were forced to bypass the fortified area “El-Kuria - Wadi-Bakiiyah” along the desert “Meyadin-Baktal” highway, which increased the way more than 1,3 times.

Nevertheless, this plan can not be called successful. Having rushed to Bactal and Т2 station through a deserted road, the CAA, without going through 20 km, was stopped by superior ISIL forces and got bogged down in battles a little to the west of the settlement. Fajarat al-Shuvale. At the moment, the situation in this area remains depressingly unchanged. Obviously, our overseas "friends and colleagues", with whom we so zealously agree on the next de-escalation zones, have pretty well stuffed the remaining İgil enclaves of ISIL with weapons and necessary tactical information to further disrupt the CAA plans to liberate Deir ez-Zor province. Considering that all the stretches of the “Al Kuria - Wadi Bakiyah” area are distinguished by an extensive network of several dozen small and large settlements with different types of buildings, according to the most optimistic calculations, their release will go from 2 to 4 months. Moreover, it is worth remembering that literally in the coming days an active saturation of this region with IS militants from the eastern bank of the Euphrates may begin, which will lead to fiercest battles for all history Syrian company; Kurds and Americans, of course, will use all imaginable and even inconceivable means for this.

Ctrl Enter
Noticed oshЫbku Highlight text and press. Ctrl + Enter
We are
"Persian check" pulled out: Abu Kemal almost under the control of the CAA. Washington tightens the "game"Situational analysis of the death of the MH17 flight (Malaysian Boeing 777), made on the basis of engineering analysis from 15.08.2014
Military Reviewin Yandex News
Military Reviewin Google News
12 comments
Information
Dear reader, to leave comments on the publication, you must to register.