Atomic weapons in the hands of Kiev 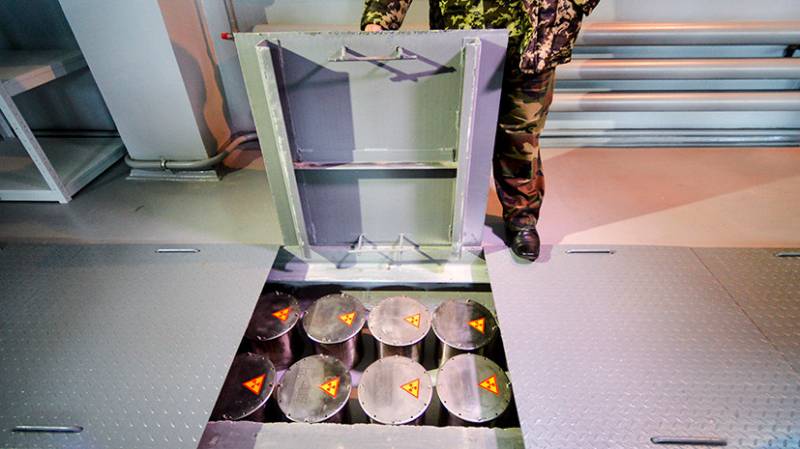 Russia exported spent fuel and was ready to export further, as a country of manufacture - this is stipulated by contracts and costs about 200 million dollars a year. After the first Maidan, Yushchenko relied on American fuel and, after Bush’s visit to Kiev, began, against the will of nuclear specialists, to push the Westinghouse fuel assemblies into the reactors with his own hands. It makes no sense to consider here the poor quality of the Westinghouse FA, there were emergency stops and unloading of the core. But beyond that there was another embarrassment.

The Americans happily agreed to supply their fuel assemblies twice as expensive as the Russian corporation TVEL, but they categorically refused to take the spent nuclear fuel. Russia shrugged, raised the prices of its fuel assemblies for the "friends" from Kiev, but refused to accept anyone else’s flat. From whom they bought - go there and drive. And with this problem.

Russia has the most advanced systems for the reprocessing of spent nuclear fuel, which is the undisputed leader in the world in terms of these technologies, scale and future prospects for use. The French and the South Koreans are trying hard and successfully - but they have enough of their own fuel, they don’t need someone else's. And the Yankees do not have such technologies at all - they keep working off at temporary sites. One of which, by the way, failed several months ago. In general, they do not want to import SNF.

And then Yushchenko decided to build such a repository in the Chernobyl zone. In Ukraine, no one was delighted and the decision was successfully sabotaged before the current regime seized power. Which began the process of "saving". First of all, taking a loan in 260 millions of dollars for the construction of the CCNWF. It is already known that the price of costs is to be included in the price of electricity - let every citizen spend "for a good cause."

Protests of residents of the surrounding villages ceased after the appearance of boys with machine guns.

So the process is running. The total costs, even without taking into account the theft, are such that it would be possible for another five years to quietly pay Russia for the export of waste. But still it is necessary to somehow solve the issues of object protection. I am not specifically talking about the multitude of narrowly specific tasks related to the storage conditions of spent fuel. Suppose they somehow manage to solve. Let's say ...

But the terrorist threat ... The Kiev regime is no longer cope with it, as everyone sees. Crime rolls over, grenades are thrown at policemen on call, patrol cars are shot from grenade launchers, in the center of Kiev two residents of Transcarpathia are caught with 6,5 kg of ready-made explosive devices.

But what's the point of listing that Kiev cannot, if its disgraced Georgians cross the border break through with jokes and jokes frolicking in the center of Kiev.

How to protect an object? Tanks every 100 meters around the perimeter? So there isn’t enough of them, tanks. And who guarantees the loyalty to the regime of the "heroes of the Maidan and ATO" guarding the perimeter? Or by chance already several times a year, military depots burn and explode? After all, they were also guarded intensely, and each time after the next fire, they were also strengthened, improved, deepened and ... exacerbated.

Only Americans can give monkeys grenades and calmly look at the results of the experiment. Yes, they are sitting far away. But after all, monkeys are not all extinct in the world. On the contrary, the efforts of the same Yankees for breeding and breeding, they are becoming more and more.

And someday all these monkeys with grenades will swim to the USA.

Why Europe is not outraged, it is absolutely obvious - the power of a possible thermal explosion of nuclear waste is small and nothing bad will reach Europe - the radius of dispersion of radioactive elements in such explosions is small. But the people of Kiev should think about it - Chernobyl alone was enough to calmly observe the creation of the conditions for the appearance of his younger brother.

Ctrl Enter
Noticed oshЫbku Highlight text and press. Ctrl + Enter
We are
Ukraine with the help of the American "Westinghouse" was going to "disperse" the reactors at its nuclear power plants. Experts: "This is Another Chernobyl"Atomic blackmail
34 comments
Information
Dear reader, to leave comments on the publication, you must to register.