November 15 2017
11
Jet-type flamethrowers that emit flammable liquid to the target showed their potential during the First World War, and since then they have been constantly improved. Nevertheless, despite all the improvements, they had a characteristic drawback in the form of large dimensions and mass. The original solution to this problem was proposed in the German project Einstoßflammenwerfer 44. it weapon was supposed to differ limited combat capabilities, but at the same time to have a minimum size.


Not later than the middle of 1944, the Luftwaffe’s weapons control commissioned the industry to create a promising model of flame-incendiary weapons with a special look. The new flamethrower was intended for airborne and airfield units, and therefore specific requirements were imposed on it. The weapon should have been distinguished by its small dimensions and weight, which did not impede the landing, as well as be easy to manufacture and operate. With all these qualities, the flamethrower should have shown acceptable combat performance.

Specialists who were entrusted with the creation of a new weapon, were able to develop a new project as soon as possible. Only a few months after the order was received, experienced flamethrowers were submitted for testing, tested in the conditions of the landfill and then recommended for use. The corresponding order appeared before the end of 1944, which was reflected in the name of the weapon. 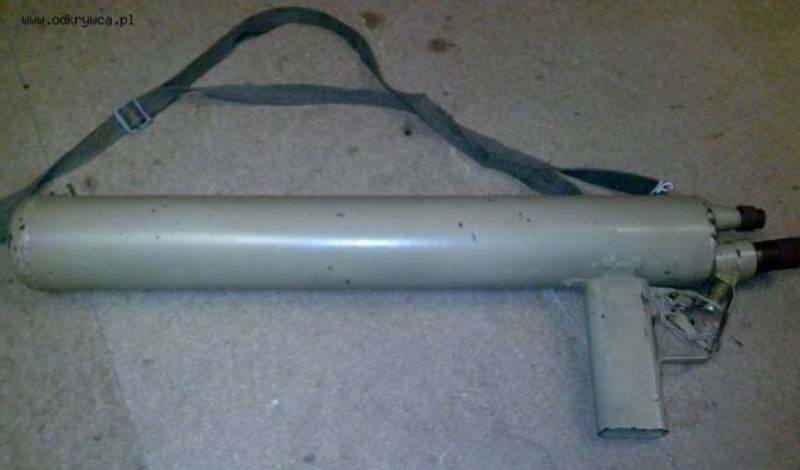 The project of the flamethrower was called, fully revealing its essence and time of creation. The product was called Einstoßflammenwerfer 44 - “Single shot flamethrower arr. 1944. ”Another name spelling is also found, Einstossflammenwerfer. In some sources, instead of two fours, indicating the year of development and adoption, the letters “46” are indicated. However, in all cases we are talking about the same sample.

The main task of the new project was to create the simplest and most compact construction. To obtain similar results, the project authors had to abandon the possibility of performing several volleys, and also to collect all the main weapon devices on the basis of a single corps. The latter at the same time served as the main power element and capacity for the fire mixture.

The largest part of the Einstoßflammenwerfer 44 flamethrower was a cylindrical cylinder body for storing flammable liquids. At the ends of the tubular body, round covers were fixed by welding. The front had a couple of small holes required for the installation of certain parts. Near the front end of the cylinder was a straight pistol grip. A part of the firing mechanism was attached to it. A pair of unions for the belt welded to the body from above.

A pair of small nozzles were attached to the front cover of the case by welding. The top one had a conical shape, and at its front end there was a nozzle for the proper spraying of a combustible liquid. The lower opening of the lid was intended for the installation of an inclined tube, which was the basis for the firing mechanism and ignition means. It can be assumed that at the level of the lower hole inside the body was placed a longitudinal tube necessary for the proper removal of powder gases.

Single shotgun received a fairly simple trigger mechanism, responsible for the release of fire mixture. It was proposed to place a blank cartridge of a suitable type with a powder charge of the required power in the lower front case of the case. Under the body and in front of the pistol grip there was an uncomplicated firing mechanism, which included a trigger and a trigger. When the hook was moved, the latter was supposed to hit the cartridge primer and ignite the charge of the latter.

The "ammunition" of the Einstoßflammenwerfer 44 flamethrower was a fire mix of one of the existing types, poured directly into the hull. The compact tank contained 1,7 liters of flammable liquid. As the name of the weapon suggests, the entire supply of liquid should have been ejected during a single shot. After that, the flamethrower could not continue shooting and needed recharging. According to other data, the reloading of weapons was not provided. After the first and last shot, the flamethrower should be thrown away and then use another similar product.

A specific feature of the flamethrower was the absence of any sighting devices. This feature of the weapon in combination with the minimum supply of fire mixture and the recommended method of application could have a negative impact on the results of the shooting, as well as lead to well-known risks for the flame thrower.

The customer demanded to make the most compact and light weapons, and this problem was successfully solved. The length of the cylinder body was only 500 mm with an external diameter 70 mm. The body was made of steel sheet 1 mm thick. The front nozzles, mounted on the butt of the hull, increased the total length of the weapon by about 950-100 mm. With the pistol grip, the maximum height of the disposable flamethrower reached 180-200 mm.

Not ready for use, an empty Einstoßflammenwerfer 44 product weighed about 2 kg. After pouring X-NUMX of liter of fire mixture, the curb weight reached 1,7 kg. Such a weight of the product, as well as its dimensions, provided a certain ease of transportation and use. 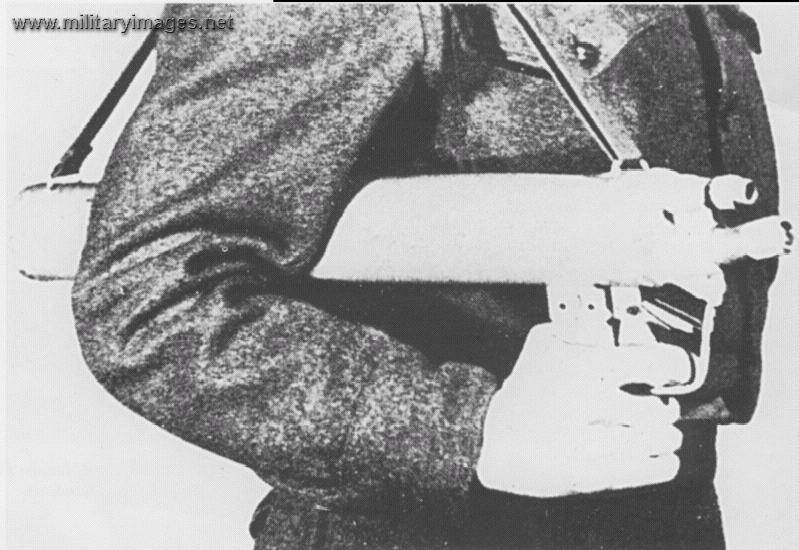 Flamethrower in the combat position. Photo by Militaryimages.net

One of the objectives of the project was to simplify the operation of weapons, and in this respect the flamethrower met expectations. Refueling the cylinder body with the mixture was carried out at the factory. The liquid was poured through one of the standard holes, after which the necessary devices were installed on it. In preparing the weapon for firing, the flamethrower had to place an idle cartridge into the lower front tube and pull the trigger mechanism. Without a cartridge and without arming the gun could be transported, including securing it to the parachutist's gear.

As planned by the authors of the project, the shooting should have been carried out with the help of a standard carrying strap. He needed to be placed on the shoulder, and the flamethrower itself was to be located under the arm of the flamethrower. In this case, a certain stabilization was ensured, and it was possible to count on an acceptable accuracy of hitting the target. At the same time, however, the weapon did not have sights, and the proposed method of firing seriously hampered the preliminary aiming.

When you press the trigger was cocked USM with instant descent. The released drummer was supposed to hit the primer that ignited the main projectile charge of the idle cartridge. The powder gases generated during combustion of the charge, the corresponding tube should have got into the body and increase the pressure in it. The gas pressure squeezed the flammable liquid to the nozzle and threw it to the target. By the time the mixture emerged from the nozzle, the force of the flame from the propellant charge had to escape from the front section of the tube for the cartridge and ignite the liquid.

The single shotgun Einstoßflammenwerfer 44 flamethrower threw out all the fire mixture in one shot. He needed no more than 1-1,5 with this. With the right use of weapons, a jet of flammable liquid flew a distance of up to 25-27 m. After the shot, the flamethrower could be thrown out. Reloading weapons on the battlefield was not possible. However, according to some sources, the balloon could be refilled in the workshop.

The flamethrower was intended to attack manpower and some enemy installations. In addition, it could be used against unprotected equipment. In general, in terms of goals and objectives, the Einstoßflammenwerfer 44 product differed little from other jet flame throwers of the time. However, a limited supply of fire mixture led to known differences in the context of use on the battlefield.

The design work was completed as soon as possible, and in the second half of 1944, the prospective flamethrower was put into service. Initially, as planned earlier, these weapons were supposed to be transferred to the landing and field units of the Luftwaffe. In the future, the flamethrower Einstoßflammenwerfer 44 began to be considered as a means of enhancing the firepower of the militia. However, the modest pace of production did not allow to implement all such plans.

The one-time flamethrower was distinguished by its extremely simple design, however, this positive feature of the project could not be fully utilized in practice. For various reasons, until the end of 1944, only a few hundred items were collected and handed over to the army. By the beginning of spring of the next 1945, the German industry manufactured only 3850 flame throwers. It should be noted that some sources mention larger numbers. According to these data, the total release of Einstoßflammenwerfer 44 flame throwers could exceed 30 thousand units. However, such information does not have sufficient confirmation, and the release of less than 4 thousand flamethrowers looks more realistic.

Despite the limited rates of release, flamethrowers of the new type are fairly widespread. The possibility of producing only one shot, in general, did not become a serious problem, and the weapon gained a certain popularity. At the same time, it was not without problems. First of all, it turned out that with the recommended method of holding a weapon, the torch was dangerously close to the shooter. In order to avoid burns, the shooting was done with outstretched arms, and the belt was used only for carrying.

Since the last months of the 1944 of the year, German units from various types of troops and structures have been limited in their use of the new single-shot flamethrower. This weapon was used both in offensive battles and against the attacking enemy. With proper organization of combat work, it was possible to get acceptable results. However, the lack of ability to produce multiple shots and the limited range of emission of the fire mixture led to known limitations and problems.

It is known that such weapons were supplied both to the units of the Wehrmacht and the SS, and to the militia units. Flamethrowers produced in small quantities were actively used on all major fronts of the European theater of operations. Under various circumstances, the number of weapons in use was constantly decreasing, but even at the time of the battle for Berlin, the German forces had significant stocks of Einstoßflammenwerfer 44 products. The operation of such weapons ended with the fighting in Germany.

A few months before the end of the Second World War, the specialists and command of the countries of the anti-Hitler coalition had the opportunity to familiarize themselves with the captured flamethrowers, but the study of the captured samples did not lead to any real results. It was obvious that such weapons have very limited prospects, and therefore not of interest from the point of view of copying. Moreover, the very concept of a compact single-shot jet flamethrower was considered meaningless.

A significant part of the issued Einstoßflammenwerfer 44 serial flame throwers in the post-war period was disposed of as unnecessary. However, many such products have avoided this fate. Now they are stored in numerous museums and private collections.

At the heart of the Einstoßflammenwerfer 44 project was the original idea of ​​creating a light and compact flamethrower, capable of only one shot. In certain circumstances, such a weapon was useful and could help the troops, but its many ambiguous features markedly reduced the real potential. Because of this, the flamethrower of the 1944 model of the year remained the only development of its class. New single-shot jet flamethrowers have not been developed further.