November 15 2017
71
Less than a month ago, speaking at the Russia Calling! Investment Forum, President Vladimir Putin made a statement about the future structure of the Russian armed forces. According to the president, the number of servicemen under contract already exceeds the number of conscripts. A further statement by the president caused a wide public response. Here is the very statement:

We must keep in mind that we are gradually moving away from the conscription service altogether.

It was the phrase "we leave at all" and led to the emergence of questions, chief among which was the question: Is our country really going to switch completely to a professional army - an army that does not have a call for military service?

Public opinion, as usual, divided. Some took the statement with a fair amount of positive, presenting the thesis that the modern army is not at all what it was customary to understand under the army for several decades. The main arguments here are as follows: only people who perceive service not so much as a constitutional duty, as much as daily work with the improvement of skills and abilities, can actually contribute to the all-Russian security system.

Others (and among them the author of this material, your humble servant) do not believe that the final and, as they say, irrevocable departure from the service of conscription will play a uniquely positive role. And the matter here is not at all in the traditions, which in any business can undergo certain changes. It’s a matter of understanding the fact which country’s heirs we all are.

One may say that only a professional army is capable of responding to all modern challenges from the point of view of encroachments on the security of the Russian Federation, but in fact it is more complacency. Perhaps a fully contract army is exceptionally well suited to states where, in order to get from one side to the other, you can take a scooter and warm up for an hour or two on a perfectly flat asphalt road. It is possible that a fully professional army is suitable for countries where the main danger to the population is ripe coconuts falling from the head of a palm tree. Our situation (and historically), as if to put it mildly, is somewhat different. Ideally smooth asphalt roads can end quite unexpectedly, with palm trees on the lion’s share of the country’s territory in general “not everything is in order”, but there are a lot of “friends” and other “well-wishers”.

There are so many of these "well-wishers" that they say in plain text: "we expect only one thing from Russia - when it collapses." The following is a set of idiomatic expressions, for which reason, a holistic Russia, you see, is simply obliged to cease to exist.

Someone will say, and where are these Wishlist "partners" and the destructiveness of a complete withdrawal from the conscription system? The connection is actually direct. If a citizen of the country initially perceives the defense of the Motherland militarily not at all as his duty, but solely as an opportunity to earn money, it will unwittingly act even at a subconscious level - “all ultimate responsibility is on the employer, and the employer can be changed”. And here you can be at least three times a patriot - the financial issue in any case will make certain adjustments.

This is not a stone in the garden of those who today chose military service under the contract. Honor and praise. This is about the internal perception of conscription service and service on the basis of contractual obligations. And there is a difference in perceptions, can confirm any person who is familiar with the question, as they say, firsthand.

Another question is that the content of the exclusively "draft" army today is dubious pleasure. Young people want to serve (and this is, in principle, a normal desire) less, and during this “time less” mastery of modern military equipment to the average modern draftee is too tough. For 12 months, of course, learning is possible. And in less time studied and learn. But it becomes unacceptable for the state to “lose” a person who has filled his hand (and head) in the operation of equipment and is sent “to demobilization”.

So why reinvent the wheel when a way out is, in fact, found. This is a mixed system - call / contact. After all, the country's armed forces need not only military aces, but also those who, in every sense of the word, offer ammunition.

On comparisons with other major armies of the world, dozens of materials came out on the "VO", and therefore the conclusion is short: the army of a modern country of the world is the golden mean between recruiting and contractual personnel formation systems. It would be desirable to hope that Russia will not chase after unwarranted experiments. 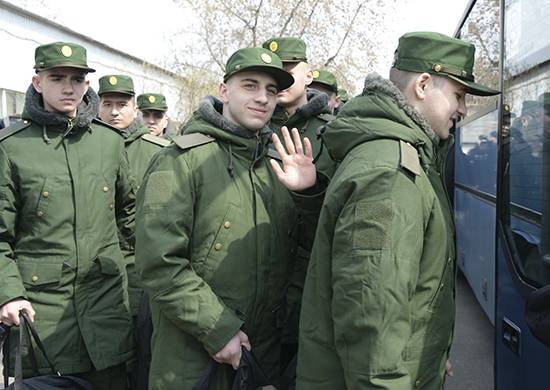 And now, actually, about why this material comes out today. And today in our country - the Day of the recruit. While there are still draftees ... And there is a day ... And this is the day in which the younger generation, the generation of future defenders of the Fatherland, talks about what the profession of protecting the homeland is.

It is gratifying that with each passing year an increasing number of military units open their doors to schoolchildren and students, enabling them to see the life of modern servicemen with their own eyes and form an opinion about the Armed Forces of a country glorious for its remarkable victories. It is necessary to see how the eyes of the boys change, who for the first time in their life have the opportunity to touch the real martial arms, sit at the helm of a military aircraft, be in the compartment of the existing ship.

This means that no one, thank God, has canceled the concept of “military-patriotic education”, and that thanks to these simple, at first glance, public events, a young man can actually have a real goal in life - to serve the Motherland. Otherwise, we ourselves often reproach today's young people, stating that they only have smartphones and low humor on their minds. In fact, young people, as always, are addicted. But what will she be fascinated about in the end - this is the main task of the representatives of the middle and older generations - that is, you and me. And the leadership, I think, is also well aware.

Ctrl Enter
Noticed oshЫbku Highlight text and press. Ctrl + Enter
We are
November 15 - Recruit's DayConscript Day in Russia
71 comment
Information
Dear reader, to leave comments on the publication, you must to register.