November 15 2017
7
Kazakhstan currently cannot boast of a developed defense industry, and besides, it does not have its own design school. However, the state’s army still needs a different technique, and therefore has to turn to third countries for help. A few years ago, the result of international cooperation was the emergence of a new Arlan armored car.


Not having its own production of armored cars, Kazakhstan turned for help to foreign specialists. The Kazakh military studied well-known offers on the international market and identified a range of the most interesting. Soon there were several contracts for the purchase of finished equipment or the organization of licensed production in Kazakhstan. One of the new agreements was signed with the company Paramount Group (South Africa), known for its developments in the field of wheeled armored fighting vehicles.

The contract provided for the organization of a joint venture that was to assemble armored cars of the Marauder type. At the same time, the parties decided to finalize the existing draft of the combat vehicle, taking into account the specific features of the climate of the client country. In a modified form, the armored car received the name "Arlan" ("Wolf"). It was stated that the armed forces and other structures of Kazakhstan can order a total of at least two hundred new armored vehicles.

Recall, the Paramount Marauder multipurpose armored car was created in the middle of the last decade and positioned as a protected vehicle for transporting people or small loads. The machine, which was distinguished by a fairly high level of protection, was able to interest some foreign customers. Within a few years, more than a hundred armored cars were sent to Algeria, Azerbaijan, Jordan and the Congo.

In the recent past, Kazakhstan has shown interest in the Marauder armored car. The first result of this was the emergence of a contract between the organizations of Paramount Group and Kazakhstan Engineering, in accordance with which Kazakhstan Paramount Engineering joint venture was created. At the beginning of December 2013, a ceremony of laying a new plant took place in Astana, and at the end of November of 2015, the ready-made enterprise was solemnly launched. On the assembly of the first batch of armored cars took about a year.

According to known data, the production of armored "Arlan", launched at the end of 2015, continues to this day. At the same time, the number of built cars remains unknown. Different sources give different estimates, from a few dozen to hundreds. Officials had previously argued that the joint work of the South African plant and the joint venture would build armored cars up to 120 per year, and the transfer of production to two shifts would increase the pace to 200 machines per year. The extent to which the potential of the Kazakhstan Paramount Engineering plant is being realized is unknown.

The Kazakh press in the recent past gave some details of future orders. So, it was argued that the security forces of Kazakhstan need at least two hundred Arlans. Thus, after the construction of the 200 armored vehicle is completed, new contracts may appear for the release of the following equipment lots for those customers. However, accurate information on this subject has not yet appeared. Armored cars of Kazakhstan assembly are now supplied only to local structures.

In the spring of this year, Kazakhstan Paramount Engineering has revealed some of its plans related to entering the international market. A few years ago, Azerbaijan agreed with Paramount Group on the supply of assembly kits for Marauder armored cars. The final assembly of this technology is carried out by Azerbaijani experts. The Kazakhstan Paramount Engineering joint venture wished to enter into such cooperation and undertake the assembly of finished machines for Azerbaijan.

In the future, the possibility of licensed assembly of Marauder cars for Azerbaijan was repeatedly mentioned in new statements, but the matter has not gone further. Two neighboring countries still collect armored vehicles on their own and only for their own needs. Moreover, there are grounds for doubting the very possibility of organizing trilateral cooperation between South Africa, Kazakhstan and Azerbaijan.

According to known data, the joint venture in Astana is currently continuing to assemble Arlan armored vehicles for security forces in Kazakhstan. New cars are built on the order of the armed forces and the National Guard. Armored cars for different customers almost do not differ from each other. Perhaps the most significant difference is their coloring. The National Guard receives cars of black color, while the army is intended technique of green shades. 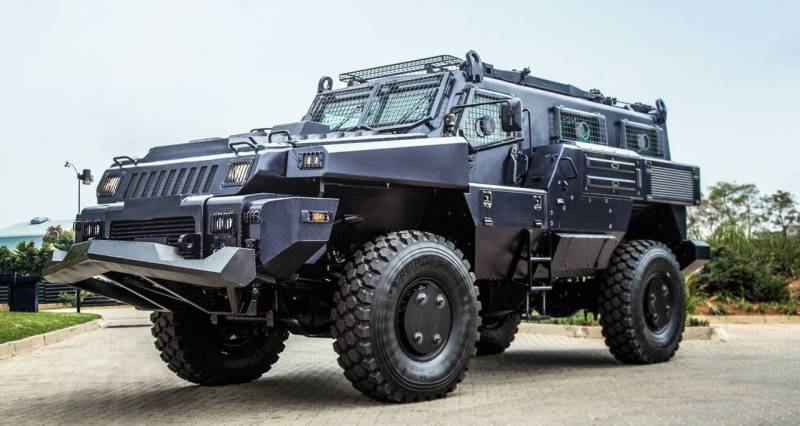 Earlier it was reported that the company Kazakhstan Paramount Engineering not only receives ready-made units from abroad, but also independently produces certain products. In particular, the Kazakh industry has mastered the assembly of armor hulls and some other details. In the first installments of Arlanov, the degree of localization of production was only 39%. With the further construction of armored vehicles is expected to increase this figure to 60-70%.

Interestingly, the situation with the supply of engines. The Marauder / Arlan project provides for the use of Cummins diesel engines of American design. Such power plants were used on armored vehicles of the first parties. Later a new supplier was found in the person of one of the Russian enterprises. He offered his engine, the characteristics of fully complying with the requirements of the project. Starting with the second batch, the Arlan armored cars receive just such engines.

At the moment, the Kazakhstan Paramount Engineering plant builds only Arlan armored vehicles. In the near future, the range of products will have to be replenished with some new samples. According to previous statements by officials, Kazakhstan will begin the licensed assembly of several other armored combat vehicles, developed by designers of the Paramount Group.

"Arlan" is a multi-purpose armored car that can carry personnel with weapons or the necessary equipment. Depending on the requirements and tasks, the armored car can be used to patrol areas, escort convoy, as well as for the transportation and fire support of infantry units. The initial project Marauder provides for the use of a base armored vehicle as a base for special-purpose equipment. 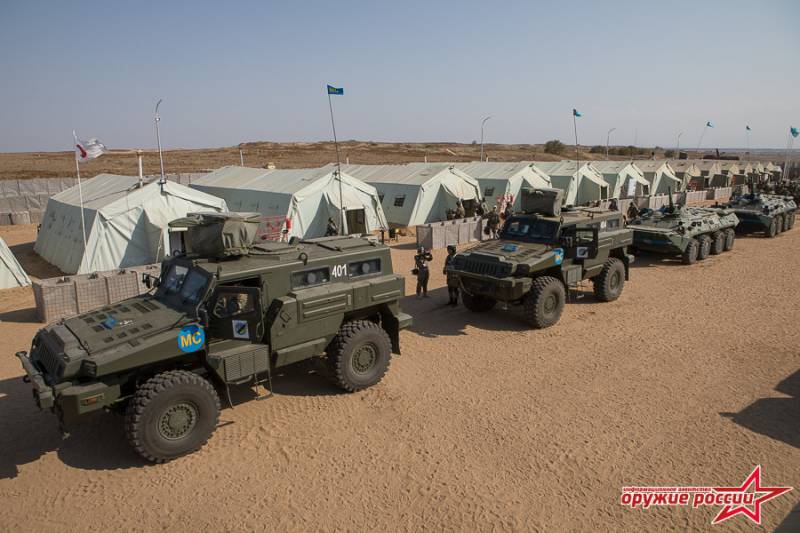 By installing some additional equipment or weapons, the protected transport can become an ambulance or command-staff vehicle. It is also possible to install a combat module with barreled or missile weapons. Earlier, the developer company demonstrated a police car designed to quell riots.

The main element of the design of the Marauder / Arlan is a bearing armored body that meets modern requirements for military wheeled vehicles. The hull has spaced booking, providing XANUMX X-level STANAG 3 ballistic protection. Thus, the internal compartments are protected from armor-piercing rifle bullets. It is argued that the armor is able to withstand a hit and 4569-mm bullets without a reinforced core. The possibility of equipping an armored vehicle with mounted modules that increase the level of ballistic protection is declared.

Like other modern armored cars, created taking into account current threats, the Arlan is completed with a characteristic V-shaped bottom. Such a hull is able to protect the crew from the explosion of an 8-kg explosive device both under the wheel and under the bottom.

The armored body has a traditional hood layout. In its front of the unit are placed the power plant, and a large rear compartment is made habitable - it is designed for the crew and landing force. It is possible to transport some cargo without using the internal space of the machine, for which several large boxes are located outside the main building. 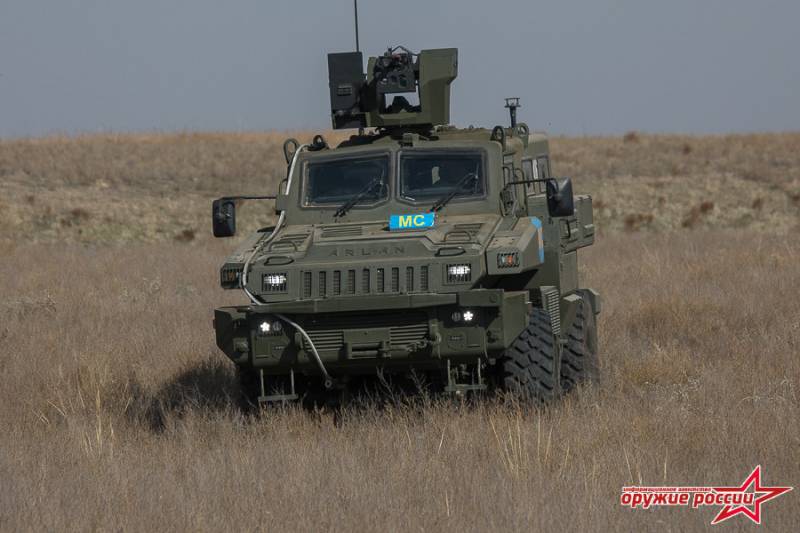 "Arlan" on the ground. Photo IA "Weapons of Russia" / arms-expo.ru

In the original project of an armored car, it was proposed to use a Cummins diesel engine with an 300 hp power, coupled with an Allison 3000SP automatic transmission. The latter provides power transfer to all four wheels. A two-axle undercarriage was also developed, providing high cross-country maneuverability.

To manage the armored car "Arlan" should own crew of two people. The driver and commander are in front of the habitable compartment. Behind them are eight seats for the landing: four on each side. All crew members and paratroopers have at their disposal energy-absorbing seats, reducing the negative impact of the shock wave of the explosion.

The machine has advanced glazing, providing a complete overview of the surrounding area. It is suggested to follow the road with the help of a frontal armored glass consisting of one or two large panels. Glazing a smaller area is available on the side doors. The sides of the troop compartment are equipped with a pair of rectangular openings for glass. Observation of the rear hemisphere can be done through a window in the aft door. The airborne glazing of armored cars for Kazakhstan is equipped with embrasures for firing personal weapons.

One of the main modifications of the original project, carried out at the insistence of the Kazakh side, was to improve the climatic equipment. From the point of view of climate, South Africa and Kazakhstan do not have cardinal differences, but the customer of Arlan armored vehicles demanded to use a new air conditioner. The device with a power of 14 kW ensures comfortable operation of the crew and landing force at atmospheric temperatures from -50 ° C to + 50 ° C. To install heat exchangers and air conditioning fans, the authors of the project had to sacrifice part of the external boxes for the cargo. 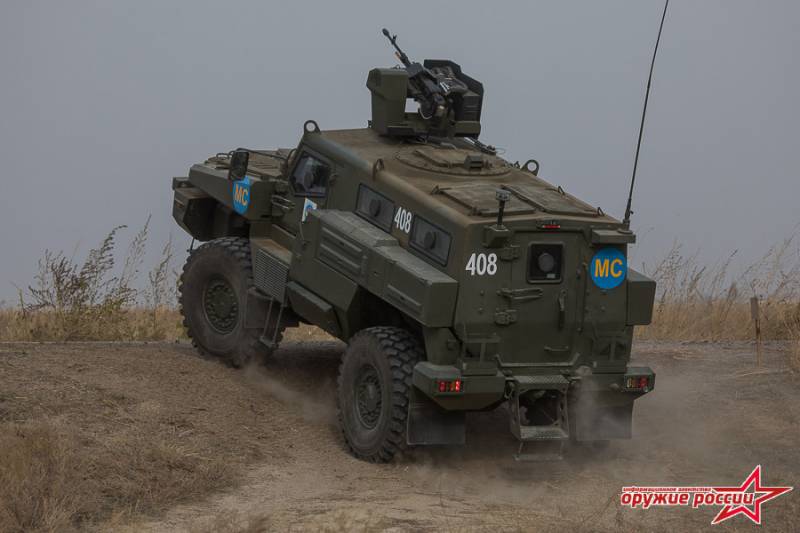 In front of the roof of the armored car, a place is provided for mounting the combat module with remote control. Machinery for Kazakhstan is equipped with modules equipped with large-caliber machine guns NSVT. According to official information from the developer of the basic project, it is possible to use other systems, including missile launchers of anti-tank missiles. In all cases, the weapons are controlled from a console installed at the commander’s workplace.

Marauder and Arlan armored cars have a total length of about 6,5 m with a body width of 2,66 m and height (on the roof, without armament) - 2,75 m. Curb weight is determined by the configuration of the machine and can vary from 11 to 13,5 t. up to 4 t an armored car can weigh up to 17 t. At the same time, it is capable of reaching a speed of up to 120 km / h on a highway. Chassis provides movement over rough terrain and overcoming various obstacles. Reservoirs are invited to cross fords to a depth of 1,2 m.

To date, armored cars, designed and built in the Republic of South Africa, managed to enter into service with several foreign countries. Kazakhstan also showed interest in such equipment, but did not wish to purchase finished products and initiated a licensed assembly of armored vehicles on its territory. Now Kazakhstan Paramount Engineering, a joint venture, intends to enter the international market by offering its armored cars to third countries. Will it be possible to do this, and how will the companies of South Africa and Kazakhstan be organized in this case? Time will tell.